(I call this part 2, even though it isn't,  simply to avoid confusion with The Very Long Haul.)


Right from the time he first saw my rough sketch of the room addition, Craig, my contractor, declared this a very long hall. Perhaps a bowling alley in scale. Just the final stub of it shows up in his almost-to-scale plan proposal. 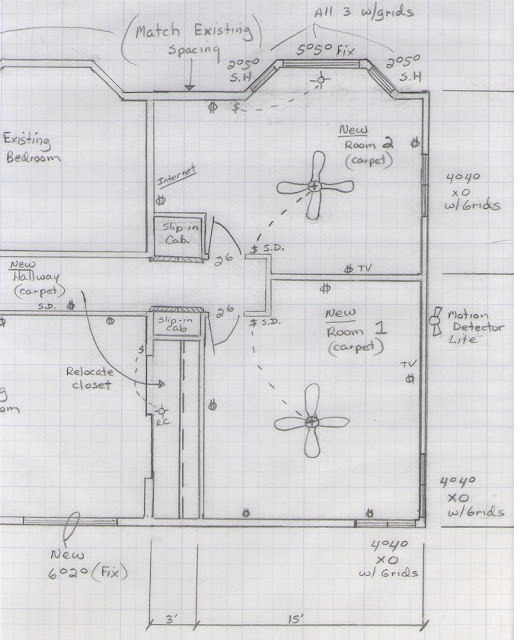 I couldn't see any other way to get from one end of the house to the other without a long hallway given than the new rooms would be added to the end. Perhaps he was thinking second story and stairs. The husband and I bought this house for our old age for its lack of stairs. I'm 24 years older than when we moved here. There will be no stairs.

I guess what it has added to the hall is the length of my bedroom, plus a little more, because there used to be a linen cabinet at the end, and now there is St Francis' niche.

Well, it's finished! There are add-ons and dribbles and drabbles still pending that are not part the the original project: move the generator, add a tankless water heater, extend the front planter, get someone adept at assembling, starting with my closet so I can get stuff put away. But you've seen us go from this empty ground at the end of the house to two added rooms, here before it's painted. 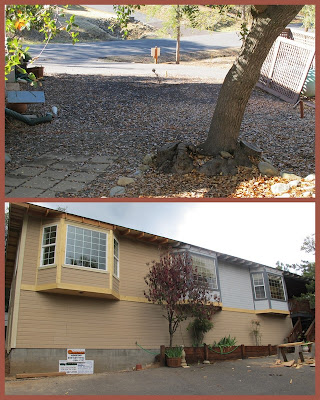 Here of some scenes from the evolution of the hall. Upper left, when the barricade was moved completely to MY end of the hall and I had to move out; as the niche was taking form; then on the right, a long view after painting and carpet but before light fixtures. Bottom left, St Francis way at the end and the ceiling fixtures in the new part of the hall; St. Francis by the light of a recessed can; ceiling fixtures all installed but not all hooked up. 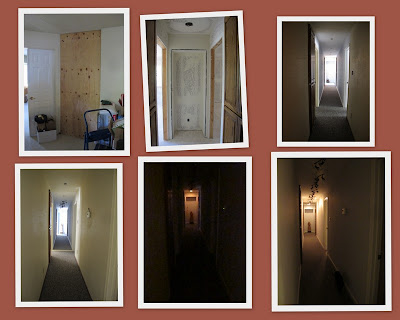 The quilting studio has the laminate floors that look like big tiles, in the beginning in the upper left and complete in the lower right. Ugly hardwood in the entry hall was also replaced by the laminate. The kitchen (lower left) and the hall bathroom have the vinyl tile effect. 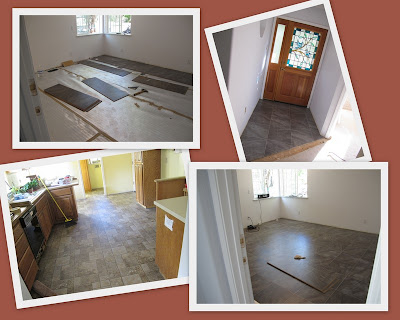 Here's the carpet guy cutting out and rolling up the piece for the long hall. 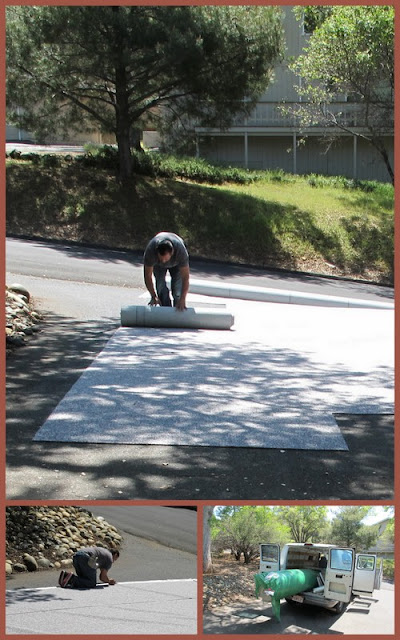 These are the light fixtures for the hall. With all the family paintings Sister and I have, these will light my hall gallery. She has really done a nice job on her hall gallery, so I think I'll enlist her help. There are five of these fixtures, so I guess the hall is long. 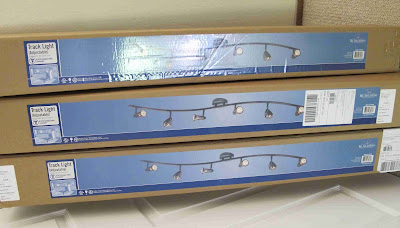 These are the dimmer switches now required for incandescent bulbs. I love them. 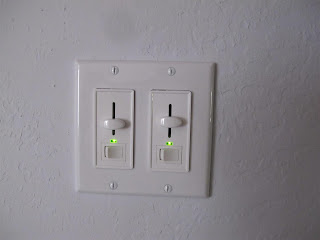 Here are reasons kitties and I needed to vacate for the final push to end on inside construction. 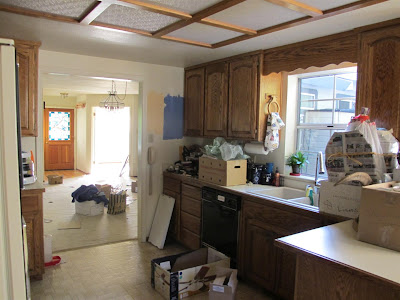 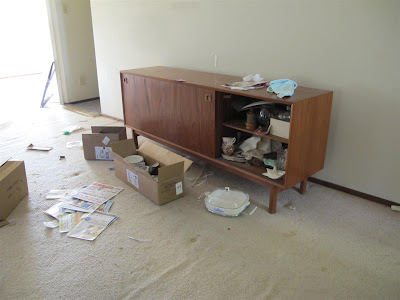 Now that I see what's coming out of the buffet (the guys packed up), I realize that the orderly look of what I put back is because a bunch of stuff hasn't made its way back in. Darn.

Here are the kitties just before we came home. (Henley did not eat Jean-Luc.) 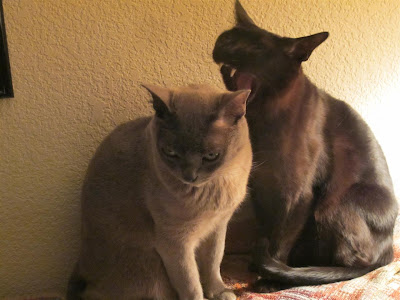 I got this cat tower to use at Sister's house during the exile and Chloe adopted the top shelf. The tower is in my bedroom now and she sleeps up top at night where she can keep an eye on the boys. We continue without locking anyone up in the kitten room at night. There is still hissing and growling, but something of an uneasy truce between Chloe and Jean-Luc. Maybe someday they'll both relax. 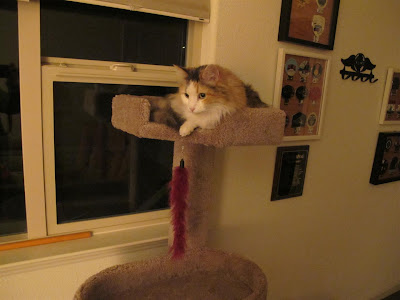 Thursdays Out continues, a little oasis during the confusion. A couple of weeks ago Barbara came in with these festive gloves, sox and hat, and Sandy had a selection of watches that she'll be selling at the Quilt Stroll coming up in early June. I had such a great photo op there last week with all kinds of construction going on at The Little House, as well as our own craft and needlework. One of the workmen gave me his macho pose as I raised my camera, only to read "memory card missing" on the LCD. Rats! It was back home in the computer. 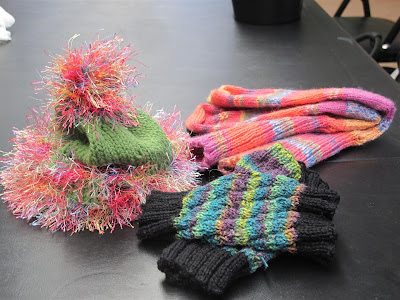 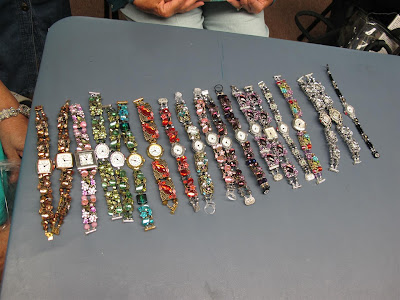 Going up toward the end was my new dining room fixture. 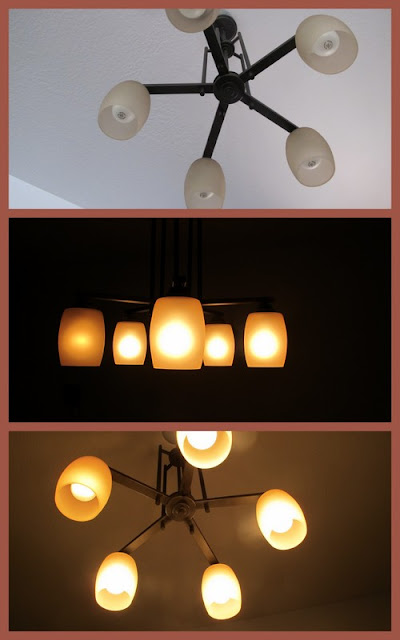 Sigh! I got the TV hooked up not too long after we came home, but deleted a couple of components from the system and am trying to salvage a tape deck and turntable from Husband's old stereo system. Hooking the old guys up was a lot more complex than plugging together modern systems. It doesn't look like I have enough plug-ins in my home theatre system and I'm not sure they're all compatible. I would hate to plug them in and blow up the sound system. The manuals don't speak the same language, so no help there. There is still a big mess back here, but I've found some cord ties to help tame it. There are a lot fewer cords here than before I tore it apart. There's only one power strip and only one plug into the wall. 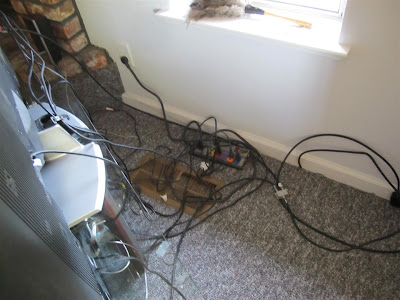 Here's the weekend before Memorial Day when the tourists began to flood through town, as did some women cyclists who had just completed a steep six mile uphill climb and took a break in the park. They were being shuttled up the road a piece to do a 50-mile mostly downhill run for the rest of that same day, then a ride planned for all day on Sunday. 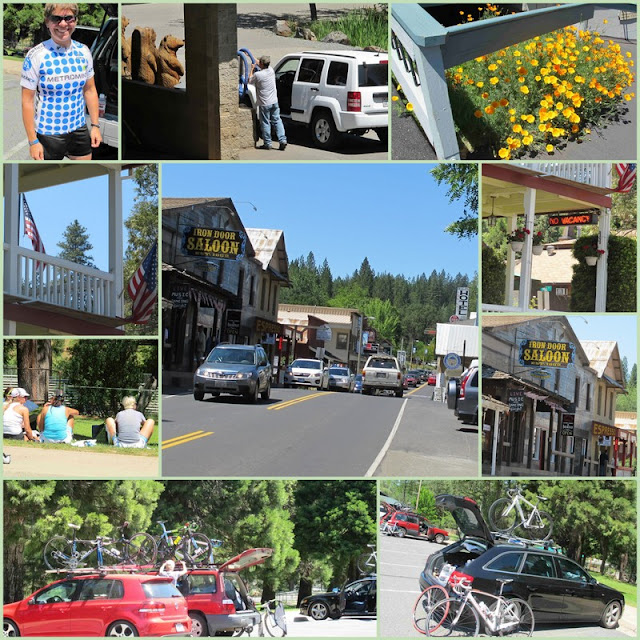 Outside work came to chez moi when the cement truck arrived to create a swale to carry water off from under my deck, put a step on the basement entrance, and create a pad for the relocated generator. I asked the guy who was wading in the concrete up to his knees who did his laundry. He does. His mom doesn't like to do it. (Quelle surprise!) The last view of the truck was how I left them behind to go to town. It had stalled where you see it at least an hour before my departure. They were waiting for a huge tow truck to come from afar. 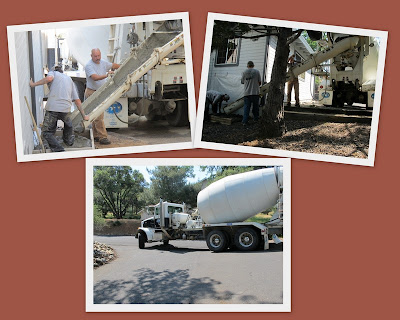 You never saw so much animal arranging going on as on the buffet. Daughter put up her version first. Sister rearranged it. I arranged it again (it's mine, after all), and tweak it every time I go by. This still may not be the final configuration. 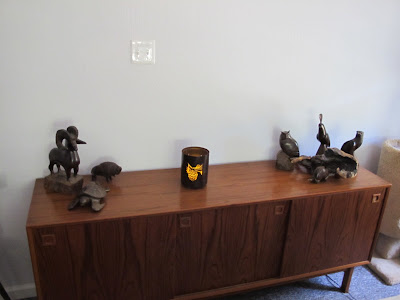 My first meal eaten at my table in I don't know how many years. Someone had found place mats and salt-and-pepper shakers and napkins, so it dawned on me that this was the place to eat. 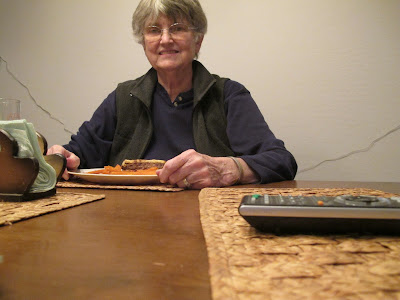 Craig's last day before going on a little vacation was to wash and clean the deck, which was cluttered not only with construction debris, but ratty covers over the bench and table set to shelter feral cats from winter weather and cat fur and a cat bed that had been torn apart by critters looking for nesting material.  It was quite a job and I took advantage of his manly hefting skills to rearrange the furniture. 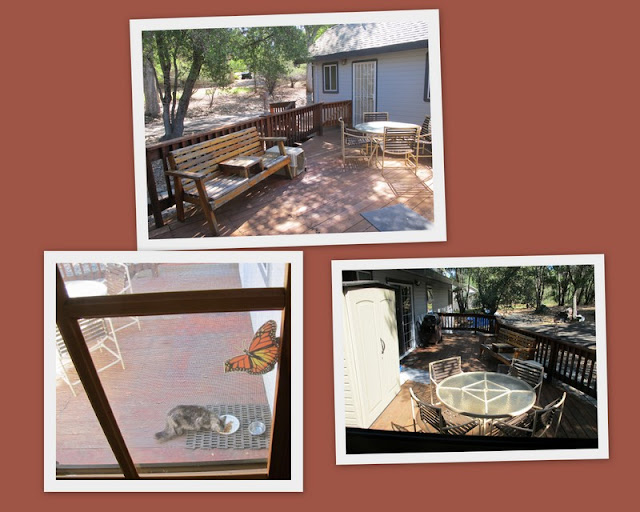 When all the other interior work had been done, the window-covering guy came in to install the shades. I especially like the left one, which can be pulled up, or pulled down, or anything in between. I wanted that because that window only opens at the top, so I can close the bottom for privacy while letting air come in at the top. On the right, for the slider, there are double shades, operated independently. 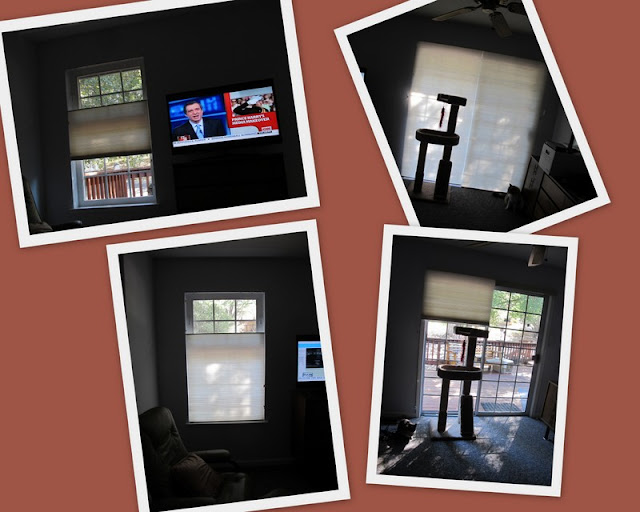 These are the new study/office and quilting room shades. 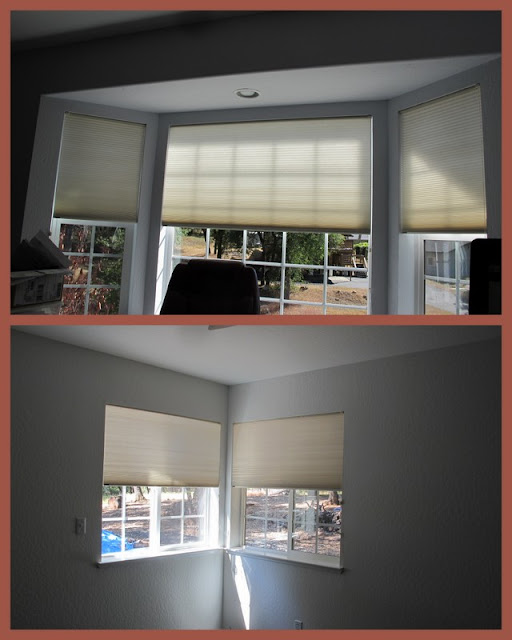 I realize now that it really is a long hall, especially when I have to go -- as I frequently must -- from one end to the other and back for something needed or forgotten. It's done wonders for my pedometer totals, without even going out for a walk. 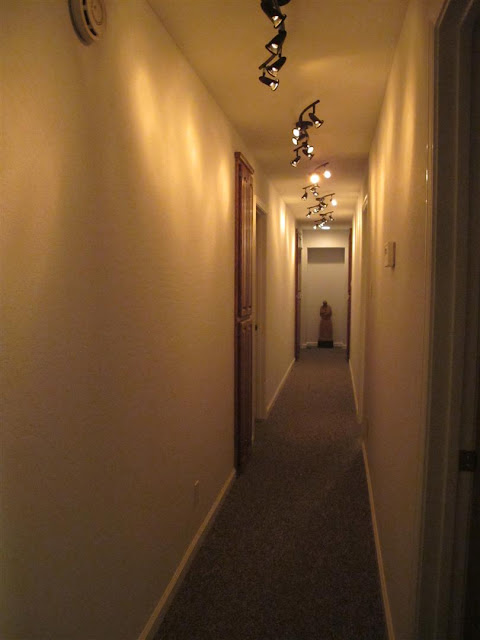 Except for the missing planter box, my house looks like it has been this way all along. I love my new bedroom arrangement. It's the same size as before but with the closet and mirror doors in a different location, as is the bed, it feels really big in there. There is much to do to put the new rooms together, but can't wait to get to use them. I have a trip coming up that will delay that opportunity somewhat.  Oh, well. 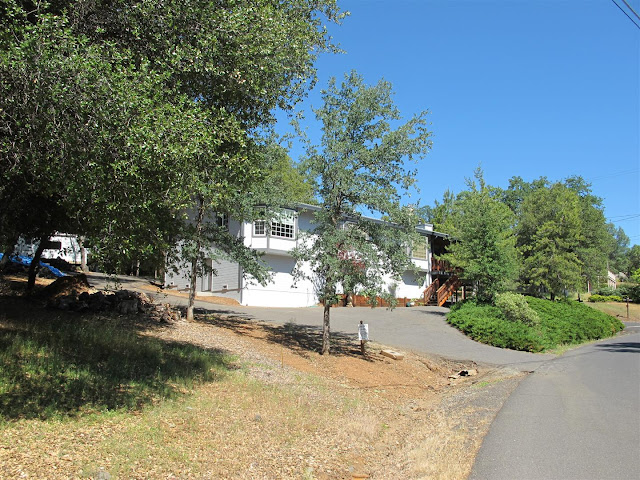 See you when I can.