. . . that everything in the house, including what I stuffed out-of-the-way in the closets, will have to be moved to paint and carpet it, panic mode starts simmering just below the surface.


I'd already vacated my bedroom, packing most of my clothes in boxes and sending them to Sister's Garage Mahal for storage during the room addition. Sister lent me a clothes rack and I put other essentials in the small dresser. The clothes rack and dresser are in the kitten room.

It's cozy, it's cluttered, but I'm settled into my little routine. Last thing before bed every night I bring the folded mat from its day spot in the kitten room, my pillows and sleeping bag from the garage, then the reverse immediately when I get up in the morning. Someone (I have my suspicions but no direct evidence) likes to pee on soft things, so they're kept high or locked away. 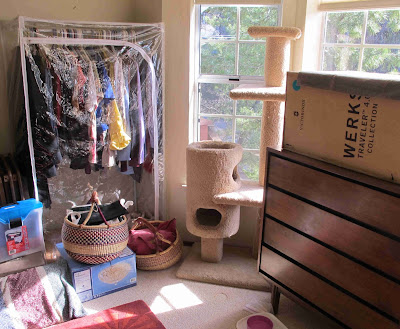 The rest of the living room is jammed with boxes that had things thrown into them by Craig and Tom for all the last minute vacating of the office. And my dining table, which has served as computer desk with its attendant peripherals and other mess for several years now.

Now, having decided that this is the time to paint, recarpet and refloor the entire house, while making flooring choices and being prompted to pick paint colors, while the electrician is coming in to relocate an existing light fixture, while the drywall guy will be in this week to repair cracks in the ceiling and walls, while being told by Craig that I'll have to be out of the house starting April 24 for the painting and flooring, it dawns on me that all my carefully constructed arrangements to have crucial stuff available for the duration will be completely disrupted. The guys will finish the addition, then move all the stuff into those rooms so they'll have access to the existing home. I can't just pack up my dresser and portable closet and portable office supplies and take them to the Man Cave at Sister's. I can't pack to move all this stuff, but I'll have to choose again what's the minimum I need to live on.

Moving stuff. I can pay to have Craig and Tom do this. But what and how do I pack for my cats and me to vacate? I'm feeling daunted.

On Friday of Easter weekend Craig opened up the hall, for addition tours for the cats, for Daughter who came up for the weekend, and for Sister and Brother-in-Law who brought their visiting friends.


Friday I finally got to visit Quilter Friend Donna's quilting studio for decorating and storage ideas. And, she provided lunch, followed by my visit to my doctor in the Little City Down the Hill.


When I get home, the boys are exploring.

On Saturday morning, bright sun shines into my remodeled bedroom. This will be my view when I wake up in the new configuration.


I do a walkaround outside. Some of the oaks appeared dead from the window. It's hard to tell. I think I detect buds on one of them, but a couple of others may have dead branches at the very least. The buck brush is beginning to flower. When it's out in full, the neighborhood and the house is permeated with a strange fragrance, not really pleasant. It was freshly and copiously in bloom when we first moved up here and I kept ascribing the odor to wet plaster in the new house. Except there was no wet plaster. 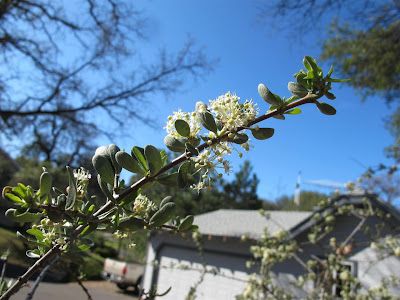 I do a little housecleaning in anticipation of visitors. I washed the kitchen floor Friday night and ran the vacuum around my little space Saturday a.m. I rolled up the two Persian area rugs that I don't want paint and plaster to fall on, with the help of the boys. It doesn't sound like much work but I paid a price. My sacroiliac joints, which have been doing nicely since the back doctor did the fancy injections, started hurting again. The first time I was bothered by it, probably 30 years ago, I was advised by the chiropractor that I should not vacuum. It seems a feeble excuse when you're younger, but I'm perfectly willing to hire it done now without guilt. Except that I called off My Gal Friday this week because my house was too messy to clean. 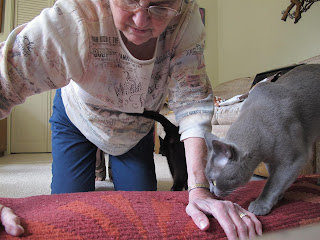 Daughter arrived by late afternoon, and shortly thereafter Sister, BIL and Best Friends arrive to look at the addition. To my mortification I find that someone has made a big puddle on the floor in the new study. Since there's no mistaking the location for something soft, I have even less idea of who the culprit could be. I only know that when Tom or Craig arrives for work Monday morning, I'll be asking for the barricade to be returned to the hallway.

We all went back to Sister's for dinner, and Daughter stayed there for the night with her Doggy, since I'm sleeping on her usual mat! When I got back home, I set out some things that have been hanging of the wall for Daughter to take. She left her car for more repair work and took my truck again. 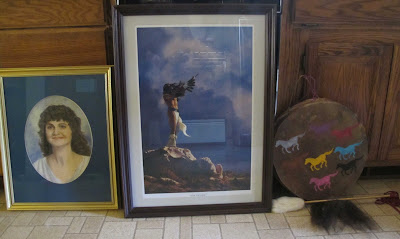 My late husband commissioned the pastel of me on the left to be done by our good artist friend, Frances Adams. The numbered print in the center, "The Prayer," is by Indian artist, Herman something. (I don't have access to the paperwork just now; I almost think it's Adams also. It came from a gallery in Santa Fe New Mexico, as I recall.)  And the tom tom I got because I planned to join a drum circle. That didn't work out.


Sister put on the Easter spread. It awaits us here. 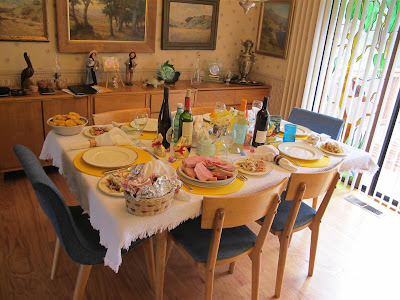 Doggy has to stay outside. This is another cat household and there might not be survivors of a surprise encounter. 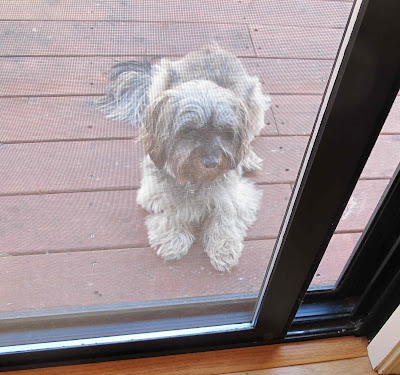 Daughter, Sister and BIL (off camera) are comparing routes home for daughter. Most of them have very complex directions, especially if you don't want to travel two sides of a triangle or take an impossibly curvy road. The easiest to remember is to go into Yosemite Valley and back out through a different entrance. It's the prettiest route, but holiday weekend traffic?? 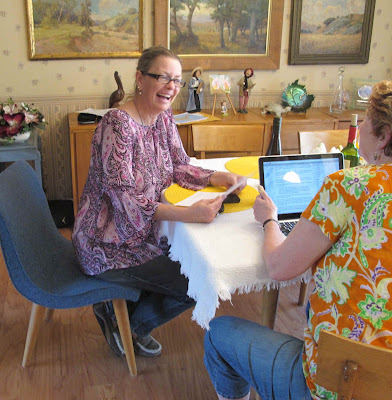 We'd had pretty weather for the day, punctuated by cells of thunder showers, but it seemed to have cleared up by the time daughter hit the road, gripping in hand a piece of paper with the consensus route in hand.

I get a phone call:

Mom, I took the Yosemite way home and it's snowing heavy slushy stuff. How do you work the 4-wheel-drive on this truck?

Mom, the river is so beautiful and green from ... (signal lost)