Enough of tax preparation for the moment. I'm frustrated that Turbo Tax Search isn't finding anything -- anything at all -- for the terms I'm entering. It's definitely not Google.

So I've had it with taxes for the day. It's been a busy week since last I posted.

It began with the Family Wellness Faire that Soroptimist puts on annually for the community. For some reason which escapes me, I volunteered for an early shift at the registration table. We register people for a low price blood panel, and people start lining up at 7 a.m., even though we don't open until 8. All with good reasons to get in early. They've been fasting and are starved. Been there, done that. I feel your pain. They're already late for work in San Francisco. I'm afraid you're going to be a little later still. My dog ate my homework. :-)

The Wellness Faire itself is free and information is available from a wide array of wellness providers. However, we do invite donations to help fund Soroptimist's projects. Our mission is "improving the lives of women and girls in local communities and throughout the world."  Click the tree photo to enlarge some of the projects we carry out. 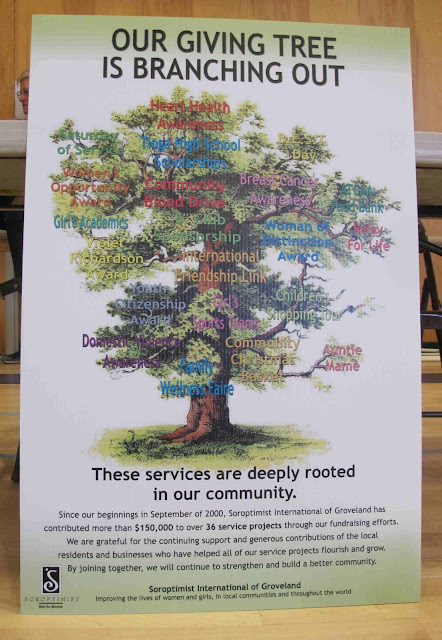 When my registration shift was over, Sister could take a break from her duties in the blood draw area, and I followed her around as she asked questions and got materials from providers. She's a medical professional and knows the good questions, so it was fun -- and informative.

On my way back to my car, I found this forlorn Doggy waiting for its owner to come out of the fair. 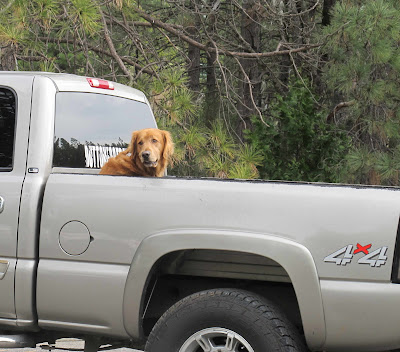 Doggy has a Little Dolly companion, though. Matching colors. 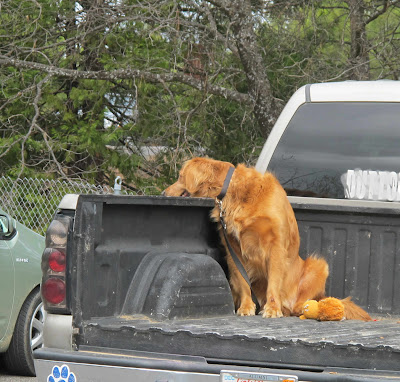 I forgot my camera on Thursday Out, so you will not see the beautiful shawl Barbara was knitting, unless she brings the finished product this week. Sister and I met with Flooring Guy that afternoon and brought home a lot of samples to toss around on the various floors and choose floor coverings. He came a bit later to measure.

I like carpeting. Hard floors hurt my feet and kill my knees when I'm down there cleaning out litter boxes. And I hated the dust bunnies that loved to dance around on the hardwood floors or tiles of earlier houses. My husband was into extreme carpeting. His only concession when we moved into our house here was to let me have vinyl in the kitchen and laundry room/half bath. (Carpeting and kitchen crud? Yuck.) When I got the new toilet last year I did bow to popular opinion and put vinyl in the shower/toilet area. I don't like it, but there it is.

Have I mentioned that a room addition leads to a cascade of consequences? Like, while we're roofing the new addition, we better go ahead and do the whole house, since it will need it in the next year or two? Like the interior of the house hasn't been repainted the whole time I've lived here and we should do the whole thing while the painter is here for the new rooms? Like it wouldn't look good to have new carpeting in the new addition right next to my ratty old carpet?

It was understood from the start that I'd likely add those on to the original project.

The carpeting is the middle piece. I'm going from sheep colored (as you see in the background) more into grey, but it has flecks of color that don't show up well in the photo. The piece on the top is a laminate that looks like large tiles for the quilting studio. I'm not carpeting it, despite my preference, because errant pins and needles tend to land vertically in carpeting and can only be found by your foot being impaled on one. In addition, they do show up better on a dark surface.

Now here's where plans have expanded. Since carpeting in bathrooms is so unpopular, I'd better go ahead and do something vinyl-like in the main hall bathroom instead of replacing the carpeting, which adds another surface. While we're all torn up, the kitchen vinyl has a few nicks, so let's go ahead and do it in the same thing as the bathroom, to provide a bit of consistency. Thus, you have the piece on the bottom. It could have gone in the quilt studio as well, only I just love that laminate, which doesn't do well in bathrooms and kitchens were it might have too much water exposure.

This is the third day in a row that the opening sentence of this blog applies.  It represent two days of blogging time and I'm still a week behind. At this rate I'll never catch up with today, no matter how long this narrative continues. Closing my eyes, breathing, will not get me any closer. I'm going to take smaller bites. I've done a beginning, only part of a middle, and, now, I'll simply end. Without a wrap up.

I'll see you soon and hope I can stick to small bites!