(Admission: I didn't manage to post this Tuesday evening, despite the time stamp. I have been totally vegging.)


Friday seems long ago now. I don't remember how I spent the day. I'm sure I devoted at least some time to preparing a presentation  for my computer club about Facebook on Tuesday evening, and Facebook had changed my Timeline format, rendering obsolete some of the graphics I'd prepared.  Likely the electrician was there some part of the day. Tom was putting on siding. He still has the teepee at the top of the end of the new rooms to fill in. I took pictures after the workers had left for the day and I'm locked out at night. 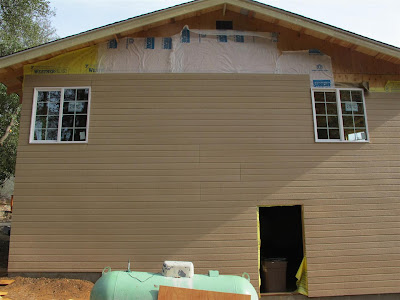 The daffodils are blooming away. They'll be happy that they're getting some rain tonight. The last "rain" was barely more than a sprinkle. 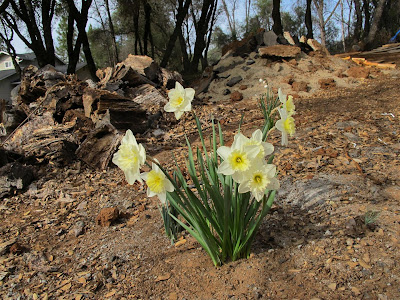 Did I mention before that I ordered the "Aussie" Kangaroo Kabinet Sewing Table? With free chair? I got two different shipping invoice emails under two different corporate names. The tracking info was identical, each saying one package at 15 lbs. I could buy the idea that the free chair might fit that description, but if my Aussie sewing table weighed only 15 lbs, I shouldn't expect much from it.

The driveway was full of subcontractors' trucks when the poor FedEx guy backed in to get as close to the garage as he could. The first big box off the truck he estimated at 50 lbs (there goes my career as a FedEx driver), followed by a second of similar size and weight. There was a total of five boxes for the Aussie, all heavy, and one box for the free chair, which I threw into the trunk of my car to take to storage in Garage Mahal.

The boxes had quite a few punches in the cardboard it was shipped in, and since we (the Royal we) won't be assembling it for awhile, I took a complete set of time-stamped photos, not noticing until I reviewed them that there's a picture of the Aussie in one of them: 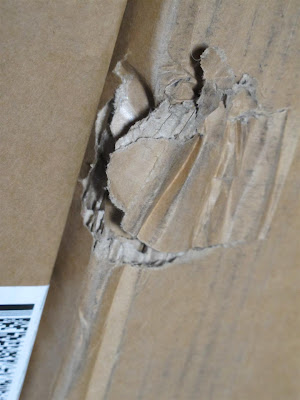 It would be a good idea if I could get some muscle to help me open these and inspect.

I'd reordered the eye drops I'm still using for the cataract surgery on Friday and tried to combine the trip to the pharmacy with a stop off at Sister-in-Law's to get a key and cat-feeding instructions. After the pharmacy, I was going to Sister's and Brother-in-Law's for dinner. So I headed from SIL's to the pharmacy just before its closing time. Only I arrived there without purse. I called SIL and she'd already called the pharmacy to tell them . . .

I left with the eye drops and the pharmacy lady put a Post It on my receipt and tucked in under the credit card scanner. Thus I was supposed to return to the pharmacy to pay off my IOU between 10 and 2 on Saturday. I was lounging around in my jammies at one on Saturday when I remembered. After paying, I stopped at the grocery store to buy orange juice and left with $71 worth of groceries. When I got home, there were two plumbing trucks and two plumbers, there to install the outdoor hose bibs. Only they were locked out of access to something they needed in the old basement. I let them in. 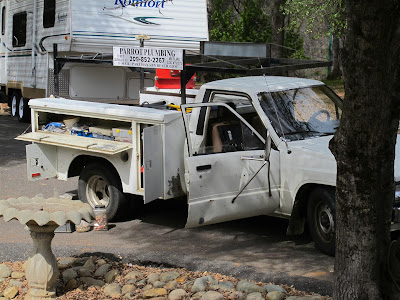 Monday I raced off to feed SIL's kitty and when I returned, Tom and Craig were up the ladders I'd seen leaning against the house earlier. Craig does not like heights. so I waited until he'd acclimated awhile before taking photos. Craig's in the dark shirt, Tom in orange.

Craig said he's fine as long as he doesn't look down. Then he looked down. 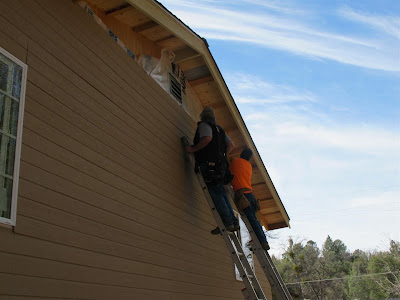 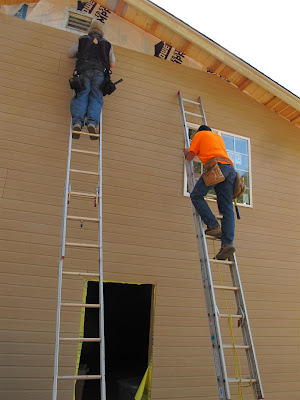 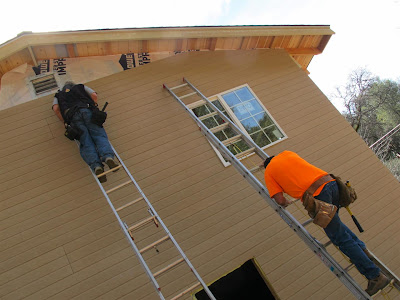 Tom carries the boards up, while Craig hangs on for dear life and tries not to look down. (I'm with Craig.)

Inside, the electrician has been running wires, mounting cans for recessed can lights, and placing boxes for plugs and switches. The electrician, a young fella', listens to his music on his iPod. Craig and Tom listen the old-fashioned way, on a boom box. 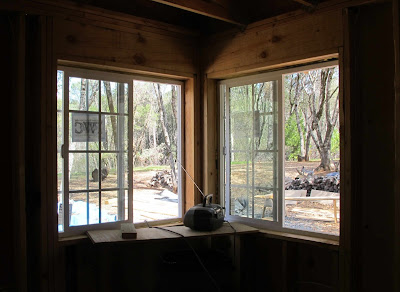 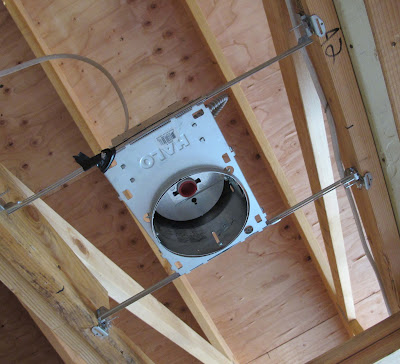 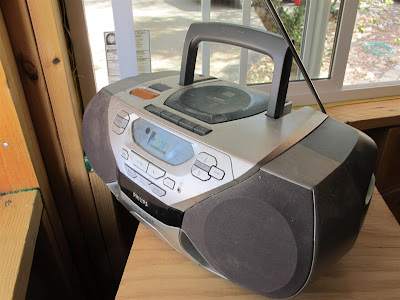 At the end of day, I did a big walkaround.

Siding is done on the back, and that teepee part on the side has been filled in. 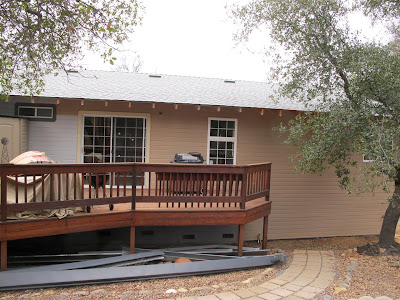 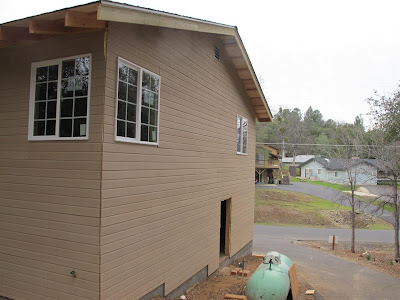 Under the house, I finally noticed the heating/ac ducts are in, as are the lines to the hose bibs. (I'll spare you my multiple photos of all the water lines.) 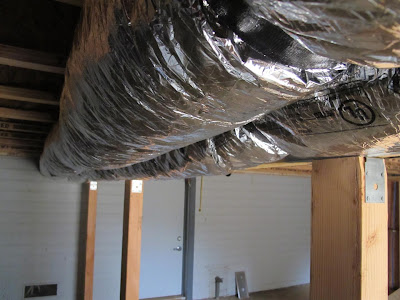 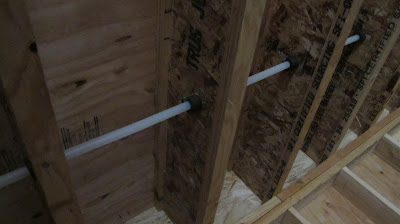 The front siding may or may not be done. Much pondering is going on. 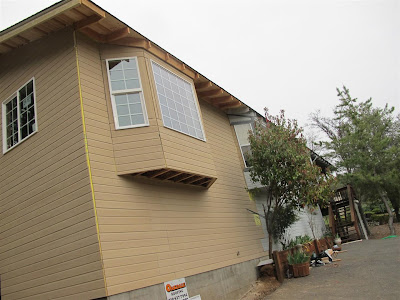 A bird flew over which I at first thought was a hawk. I walked up the driveway in its direction. It began to circle me and companions joined him. Whoops! Vultures. I'm still alive. Thanks anyway. There were five of them but they soared too irregularly to capture more than two at a time. 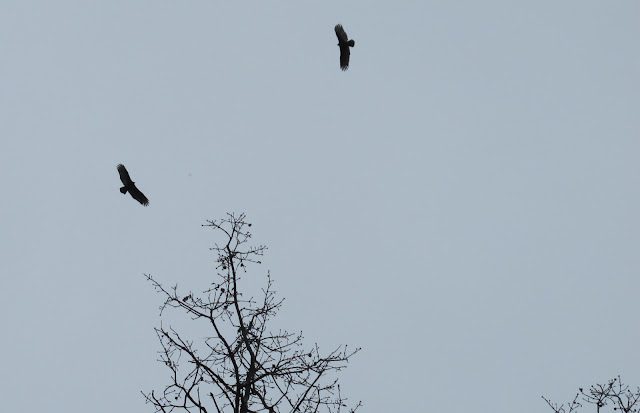 Big pine cone by the neighbor's driveway. I never took note. There must be a pine tree there. 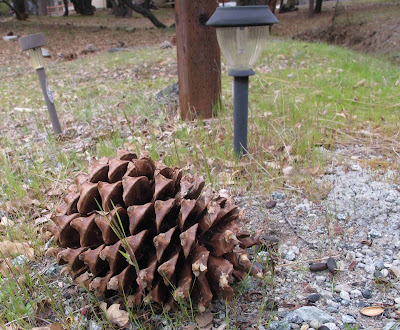 One of my Nina friends is posting a series of photos of "rust" for a particular photo group. I was inspired to take a rust picture, although I think I need to come back to it when it's sunny, instead of overcast. 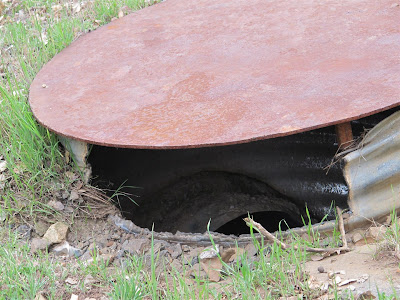 I found myself in a confluence of yellow. 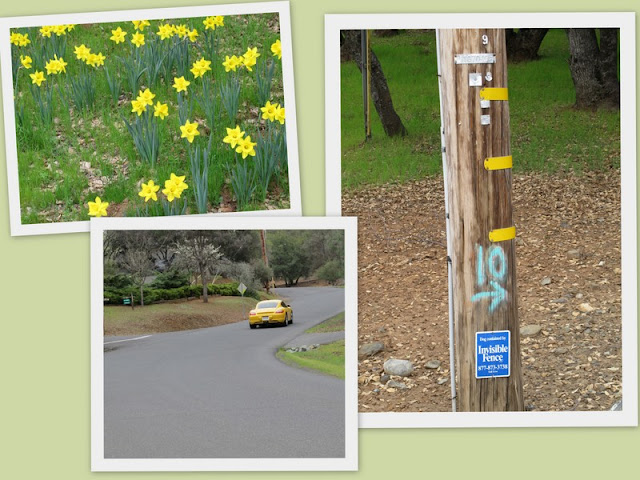 Finally, here's a clear view of what Craig and Tom had filled in this morning. 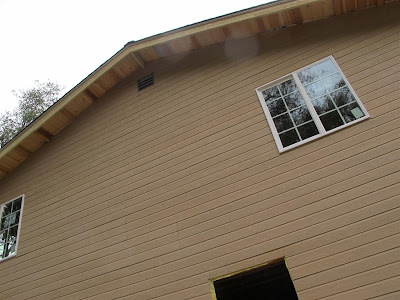 I had to get back to working on my presentation to the computer club on Tuesday evening. You know I need deadline and a last minute to finish anything!