I knew the day would come when I had to move out of my bedroom and old office for a few days/weeks/months to wed the new addition to the existing house. I think when it all started, the estimate was in about four weeks. Since then, the deadline has progressed along at "about two weeks," as weather and other circumstances created roadblocks and opportunities to follow different construction paths.

Well, my two weeks is up this coming Thursday. I didn't want to move out of my bedroom until I had to, so the last minute crush has started. I probably will not be blogging again between now and the move-out.

On Friday, while my construction guys waited for the building inspector to inspect the exposed roofing on the house and the addition, as well as construction-to-date on the addition, they did some advance work on my move out, such as disassembling my Organizer Bed. I've found a home for it and will be getting a new bed. I've shrunk 2½ inches in height since I got the bed, so it's time for one I don't have to jump up to get into. (I've lost my jump, too.) 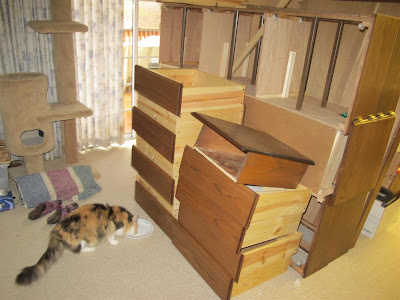 I'm keeping the mattress, which will get stashed somewhere at the final moment. Meanwhile, I have a cushy spot on the floor. I'll be using a less cushy pad on the living room floor for the duration, but it can be put away during the day. 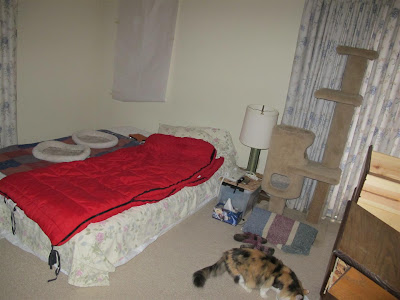 All this needs to be gone by the end of today. 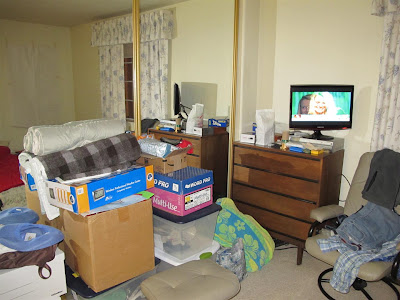 But for a quick (quickly quickly) recap of what's happened over the past couple of days, here's what I woke up to on Friday morning. Actually, I woke up to footsteps on my roof at an early hour, before Tom's normal 8 AM arrival. I jumped up and there was no sign of Tom's truck or Craig's car in their usual parking places. This is not in plain view from anywhere in the house, but I discovered it by leaning over the washing machine to peer out the window you see here.

I was slightly panicked, since the awaited inspection hadn't happened and there they were, sending bundles of shingles up the conveyor belt. And both my car and my truck were blocked by this truck. Trapped! 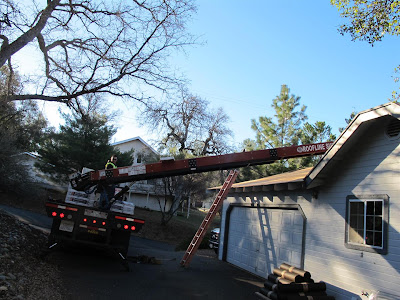 My initial panic at being trapped was alleviated when the delivery truck left and the roofers arrived in a pickup. Tom and Craig arrived. Here's Tom doing a pre-inspection look-see and finishing up any necessary fixes. 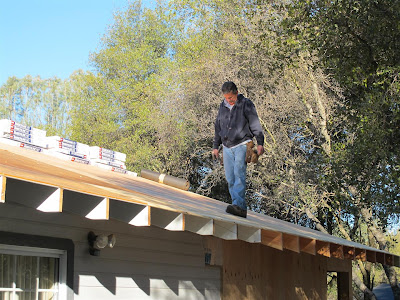 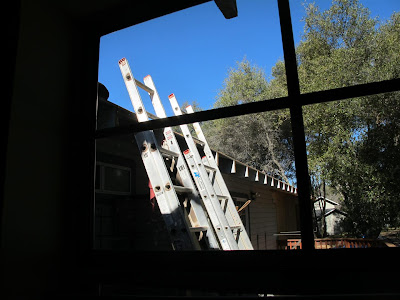 The competition for first flower of spring went to the daffodils in the barrel, but the daffodils beside the driveway finally joined in. Several daffodils leaves are peeking up in this slightly abused area of the property. I think I have the guys alert to my desire to preserve all daffodils! 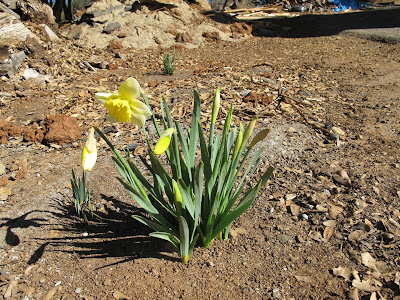 While we wait for the inspector, siding is delivered, and Craig goes with me to Garage Mahal to lift the heavy boxes out of my car for storage. "These really are heavy. How did you get them in here?"  "Before I got limited to lifting anything over 10 pounds."

Meanwhile, the roofers are sitting on the roof, awaiting the go-ahead. I guess they're happier up there than on the ground waiting. 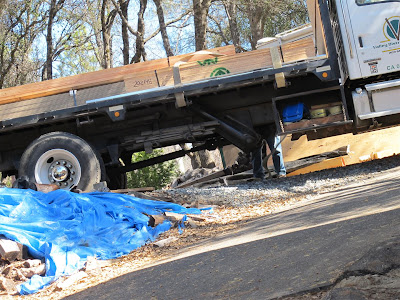 Aha!  The building inspector. Loud pounding commences on the roof. 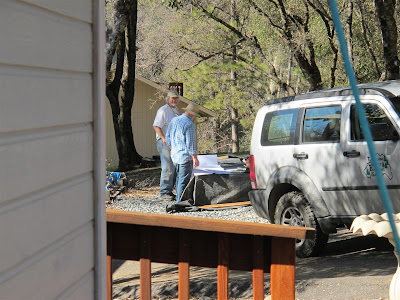 They have these coils of nails for their nail guns, and the ratatatat is in the "shave-and-a-haircut, two-bits" cadence. I keep thinking someone is knocking on the door. 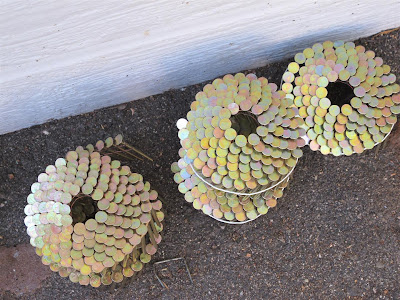 They're an interesting picture. Strays also land in the driveway, some of which get left behind on the driveway. Thankfully, Craig educated me on this possibility, so I do a quick survey before backing out of the garage! 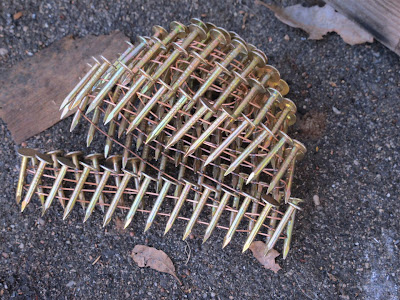 They worked until dusk on Friday. It was too dark to tell how much progress they had made. But rain had been forecast for Saturday night, so the roofers were scheduled to work Saturday to keep me snug and dry. More footsteps on the roof at 7:45 AM Saturday, running, nailing, running, nailing. 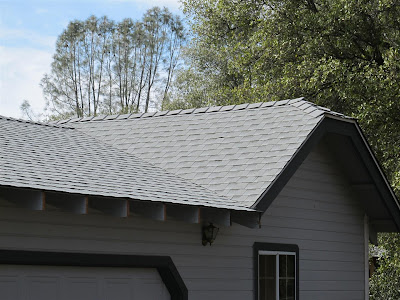 They were all done by 2:45. All the roof is on. I'm not sure when the gutters are being installed. Sister-in-Law decided to try going gutter-free after she had a new roof put on during last year. I expressed my reservations. We got the predicted rain last night, and I'm really looking forward to getting my rain gutters. I don't like it that the first step out the door and the first step back in is through a puddle. I don't want my deck to turn into a skating rink from the water that flows off the roof, nor run under the house through the vents and into the basement. I don't like it that I can't shelter the food for the feral cats under the eaves because of the splash back. 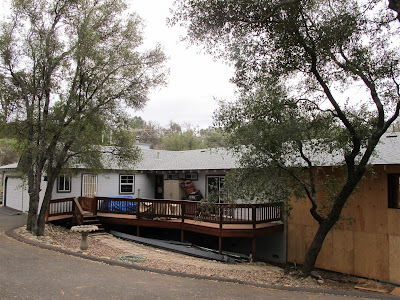 I'll leave you with this mental image. I stepped out on the soggy deck this morning to leave a cup of water for the feral cats and pick up their water-filled food dish for washing and drying before feeding them. I held the screen door ajar while I did this, and when I turned to go in, a cat came streaking out. Jean-Luc did an escape in a similar circumstance a few days ago, so that sharp instant of panic hit me before I recognized that it was Barefoot. I guess she just came in for a small look-around. Yikes!

See you when I come up for air.