Once upon a time . . .  actually, as recently as the end of January, I finished ahead of a deadline. I had packed for a Sunday trip by Saturday afternoon. My house was tidy and the cats' care was taken care of without a departure rush. It's noteworthy by its rarity.

The usual scenario is that I will have a deadline, be it a week or a year away, and will finish on the due date after an overnighter to pull together that last needed piece. Otherwise known as procrastination.

So it has been with the deadline to clear everything out of my bedroom and old study so my contractor can attach the new rooms to the house. I first thought my sliding two weeks were up last Thursday, the day my hallway to those back rooms would be shut off with a sheet of plywood. Then, due to bad weather on Thursday, the deadline was postponed. Tom would not be commuting up the hill. Craig told me they could erect the barrier on Friday or on Saturday. Just tell him which.

"Friday," I said. I'd already slacked up on Wednesday activity since the Thursday deadline was extended. This is not to say that I've done nothing. I'd already packed up and taken many boxes and bags for storage in Sister and Brother-in-Law's Garage Mahal. She has helped with some of it. I have a notebook with the lists and numbers, which is lost at the moment (a crisis!). I learned later that Craig had asked Sister whether he should give me until Saturday to finish, since I didn't look ready, and she said "Friday" also. A procrastinator needs an absolute deadline.

Thus I did an all-nighter Thursday night, leaving only the heavy boxes and bags for someone to tote out of the rooms Friday morning. (I'm thinking of 4:30 a.m. to bed, up at 7, as a virtual all-nighter.) The last minute is the hardest minute, since everything is down to miscellaneous, and nothing logically shares a box with any other item. I started trying to blog this on Friday, but kept falling asleep at the computer.

Catching up with the project

Cats are overseeing the project. 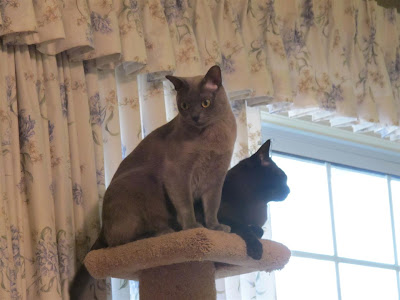 Can you see that white paper taped to the wall on the left? That's the rough location where a new window will go in my bedroom. The upper third will be an "awning" window that opens outward at the top, with the two-thirds below being solid. All will have the window-lights look to match the rest of the house. That's my mattress on the floor, my temporary location. 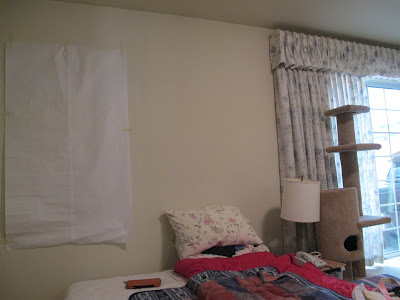 Monday, Tom begins applying the water barrier paper (not the official name to my knowledge) to the exterior, over the plywood siding. 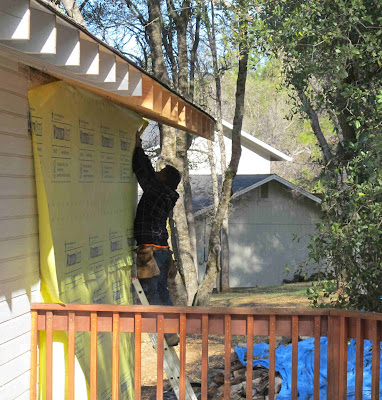 In another hour, when I look from the bedroom into the new quilting studio, I see windows. Windows! I didn't even hear a delivery, so don't know how or when they got here. 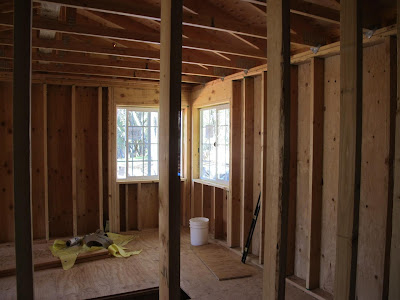 Later that day, paper and windows have come around the side. 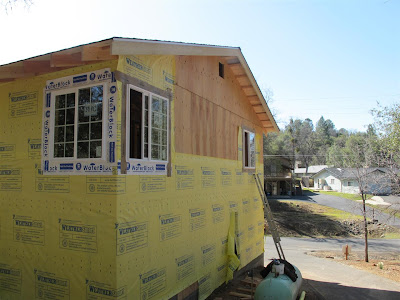 On Tuesday, Tom gets Craig to climb a ladder (not his favorite thing) to help nail up siding. 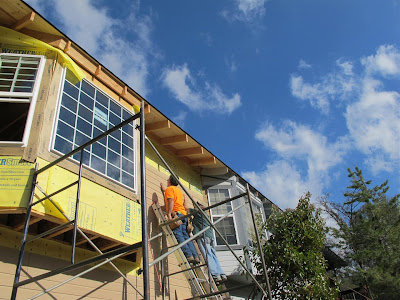 Do you ever watch Love It or List It on HGTV? Where Hillary remodels a family home that has become inadequate for the family so that they will be able to Love again the home they once loved, while David tries to find them a new home that will meet their needs now and for the future, and they will List their remodeled home?

Inevitably, Hillary's remodeling crew runs into a major problem (or more) with the old dwelling that will blow a hole in the remodel budget. Scrambling and angst ensue. In the end, the family will either Love It (the remodel) or List It, and buy one of David's offerings.

We had a Hillary moment when Craig discovered that the new siding, which is visually three boards tall, is 16-inches tall, while the existing siding is 15½-inches. The horizontal grooves that define the boards do not line up at the transition points. Fifteen-and-half inch siding in this style is no longer available. There's a solution on the cheap: throw a piece of trim-board up over the unmatched ends and hope no one notices? or do a more complicated job of removing some existing siding in the front and introducing new siding there? Craig has too much pride in his product to do the sloppy version but the latter blows the budget.

What does the homeowner think? This homeowner has a generally laid back attitude about such things -- an addition just might be allowed to look like an addition -- but appreciates Craig's pride in workmanship and thinks a future buyer might appreciate it too. Will the homeowner spring for the added cost? (Here's where we break for a commercial.)

Sister and I had to leave for a Soroptimist luncheon. Before that, I got a call from Rose, who'd been out of town over the weekend when I'd called her about picking up the Organizer Bed she had spoken for. She wanted to pick it up that day. So after the meetings, here goes the Organizer Bed. Craig and Tom carried the parts out. Rose's husband did the neat tie-down.

Goodbye, Faithful Bed. You've been a good bed, but you're too tall now for a lady who has shrunk. 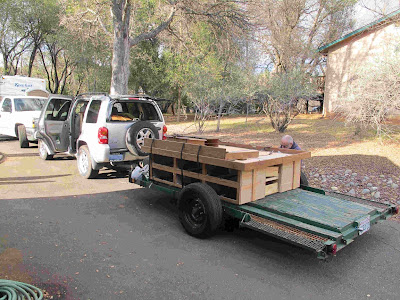 Wednesday is the builders' day off. I had medical appointments in the Little City Down the Hill, starting early, first with the ophthalmologist for another follow up on the cataract surgery (and to set up an appointment for the next one as well), then a cleaning at the dentist. There was a nice long break between appointments and I had a chance to cruise the hardware store without rushing.

The word for my Photo A Day challenge was Chair. I spotted this one in the middle on my way into the hardware store, so went back to the car to grab my camera and shoot a few chairs. I also got the dental chair on my way in there, and the funny stool the dental hygienist uses. I ended up using a photo I already had for the chair of the day, however. 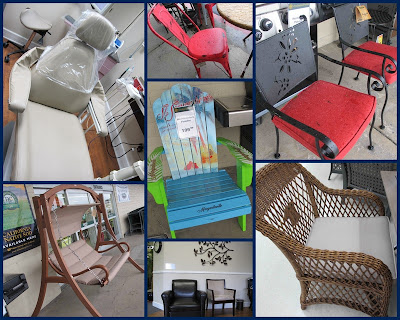 I cruised furniture, with thoughts toward the quilting studio, bedroom closet organizers, and the new study. 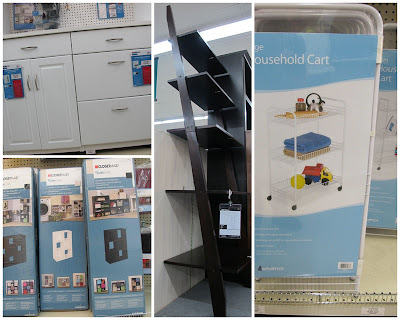 How about ceiling fans and lights for the new rooms? The light fixture at the top of the bottom photo looks like a possibility for the ceiling lights along the new longer hallway, which will be lined with paintings. 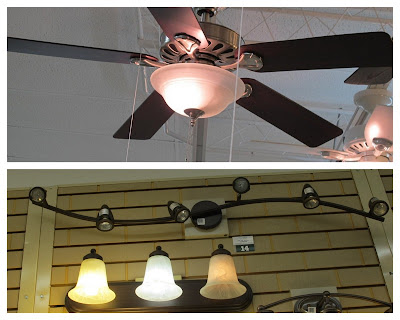 I'm not normally a fancy lamp fan, but there's gotta be somewhere I can put this one! 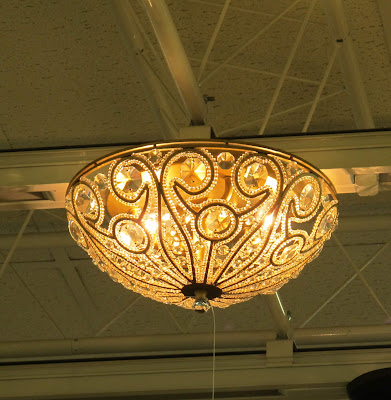 Then I raced home for a meeting among Sister, Craig and me about placement of lights, fans, switches, and electric outlets. Then Craig called to postpone until Thursday.


Sister and I broke out of the house and into the new rooms. Here she comes through the bedroom window. I had already come through. We needed to do our electrical planning. 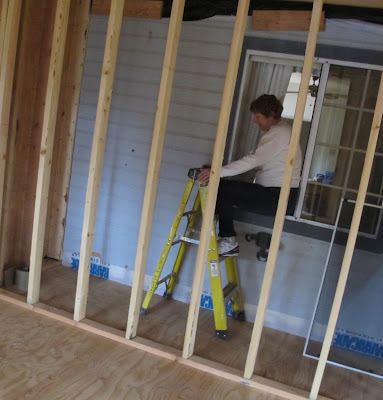 Pictures of the windows, up close and personal! 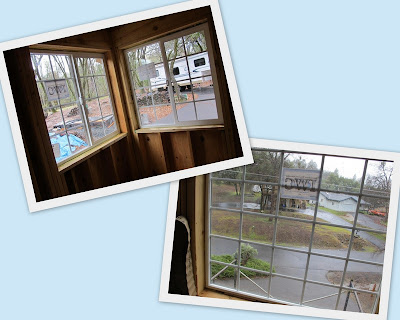 And here I am, in the new room. 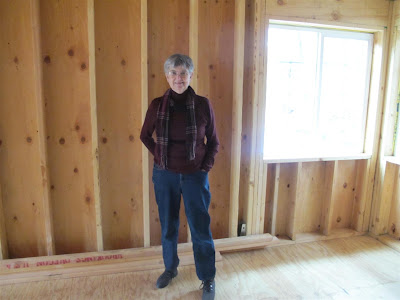 Here is my old study, which must emptied, at least the loose stuff. The heavy stuff will be stacked in a corner, remaining in the rooms. I must wrap up my old computer -- an XP I keep to use for dial-up when there's an outage at my ISP -- and all other electronic equipment. Must be done by Friday morning. 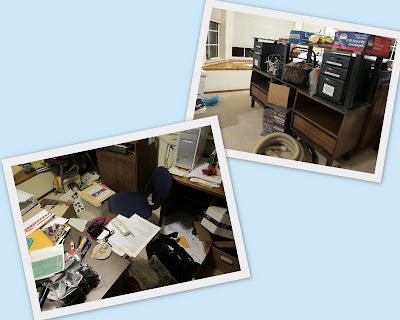 Sister and I took a break for Thursdays Out. We had a really good crowd, with three who had been "missing" back in attendance.

Barbara had whipped up this cute little girl's sweater this past week. 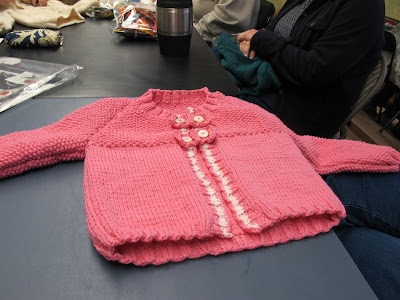 Sandy finished this partially completed child's sweater that she acquired from an elderly relative. It lacked an arm and a pattern, so she figured it out. There are talented knitters at NeedleCrafts. 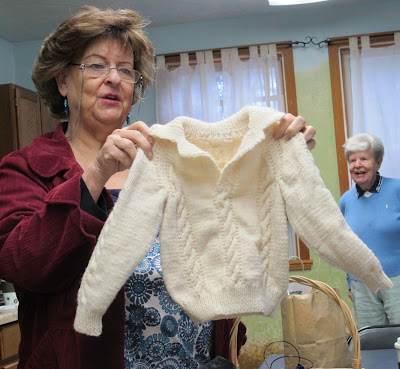 After crafts, Sister and I had the meeting with Craig about electrical placement. The electrician will be here Monday some time to -- I believe -- take an order for the electrical supplies.

With that, Sister headed home. There wasn't any way she could help with what I had to do by Friday morning. I would stay up all night if I needed to.