Thursdays Out . . . Taking a Break


The trusses were up on Monday. Snow was predicted for Tuesday. Since Tom commutes quite aways to this job and has only a two-wheel drive truck, work was cancelled for Tuesday. He normally has Wednesdays off, so there was a pause in the work.

When I woke up Tuesday, there were clouds, but also a little sun. It was darned cold, however, when I went to the Soroptimist lunch time meeting. As we left the meeting, a few tiny drops of rain misted my face and dotted the windshield. Skies darkened, then lightened, and darkened again. Was this another of those storms that turns out to be a big dud? Everything cancelled for nothing? Computer club was still on for the evening at that point.

I came home and worked on the blog about the trusses. At well after three o'clock, graupel pelted down, coating the deck and the floor of the new addition. There was a big flutter of excitement on Facebook as friends from throughout the county, even at lower elevations, started reporting the white stuff. It backed off for awhile, then huge white flakes began to fall and fell for a couple of hours, leaving a thick blanket of snow, five or six inches deep at my house, but deeper in many other places.

Except for dips in lights, brief cable outages, and lots of loud popping on the Surround Sound, I did okay through the storm and its aftermath, but lots of friends who were out on the roads have tales to tell about trying to get home and there were many accidents, stalled vehicles, and power outages throughout the county.

I'll just show one (of myriad) snow photo, the morning after, when sun reflected brilliantly off its whiteness. This is looking out back across my deck, past my trailer and into the neighbor's back yard. 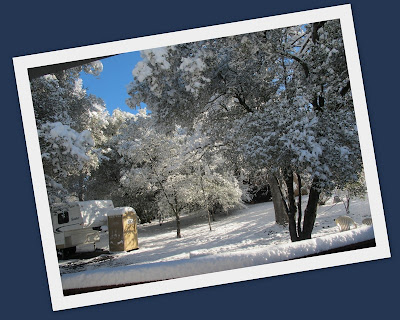 We'll have patches of snow in shady spots and big plow piles for quite awhile. I didn't go out until Wednesday afternoon to take an important letter to the post office (my final payment for Quilt Camp which I'd forgotten about!) and the main roads were all plowed by then. The parking lot today at The Little House where we go Thursdays for NeedleCrafts and Senior Lunch weren't very well plowed, if at all.

We had eight ladies at NeedleCrafts today, looking very serious here as they attack their knitting. 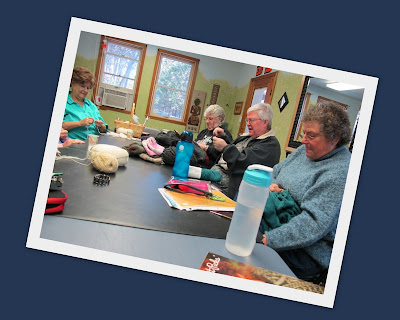 The ladies took a break for lunch shortly after this and I snapped all their little projects, which were also taking a break. I liked their colors and their relaxed poses in their baskets and bags and on the tables. 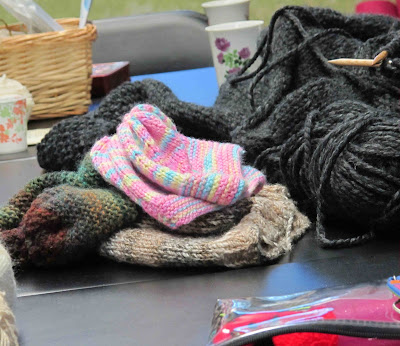 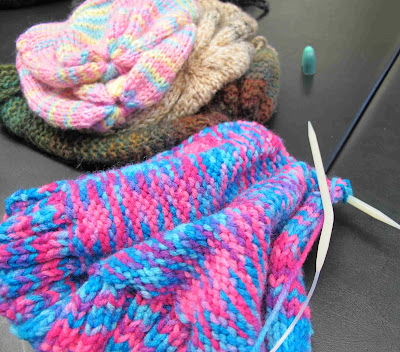 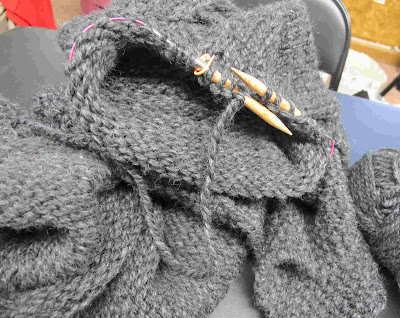 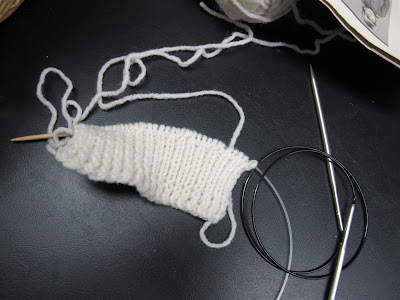 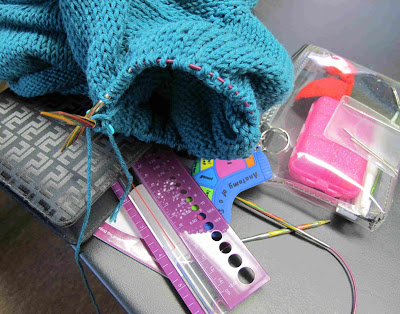 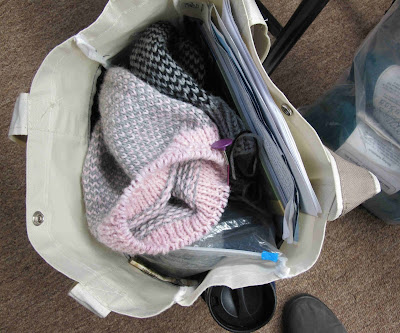 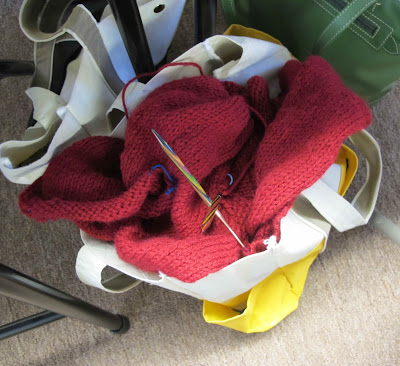 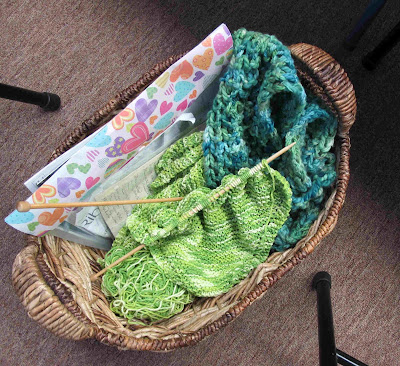 I finished rolling quarters and pennies from my late husband's piggy bank. An estimated four hours of work yielded $46.75 which I turned in to the bank. (Oh, oh, I just realized that I'd put the Canadian penny the bank had rejected into my pocket, then used it when I paid for a latté later. Whoops!) The newest coins in the collection were from 1999. Funny to see a bright shiny 1999 penny. There were some really corroded ones as well that I didn't roll, hoping the bank will turn them in to take out of circulation, if they do that.

And then I got back to appliqueing quilt blocks with my blue and white French fabrics. The picture I took of it looked so out of place with all these colorful knitting projects, I decided to wait until it's a little farther along than it is now.