Thursdays Out . . . and a Pause in the Action


I had a strange night last night. I knew I had to wake up on time this morning. I'd gotten up early yesterday for an early appointment with my doctor to follow up on lab tests from my annual exam. I often fall asleep watching House Hunters on HGTV and will turn it off later when I'm awakened by some noisy commercial. Then the Today Show serves as my morning wake up call at 7 a.m., starting with the news. So when I was awakened by the news this morning, I got up to go to the bathroom, then marveled how dark it still was. Sure, we were expecting more storm overnight. But darkness?

I lit up my cell phone. It wasn't yet 4 a.m. Oh. I'd apparently been watching CNN when I went to sleep. That explained the confusion.I still had three hours to go. Yesterday's appointment with the doctor had been cancelled. The doctor was sick! I was on standby today for a phone call to come in if he came in. Poised.

It was still overcast when I got up, as it had been after yesterday afternoon's soaker brought a halt to construction on the room addition. By the time I went out to the deck to feed the feral cats, snow pellets -- which I have just discovered is called graupel -- was sprinkling the deck, followed by a few real snowflakes.

I was surprised when I got the call. I suspected the doctor had norovirus and I have a friend who was completely felled by it for four days, despite its description as a 24-hour virus. So it became a bit of a hurry up, and, as it turned out, hurry up and wait at the office also. Another few chapters on Registrar's Manual for Detecting Forced Marriages. All labs came out just fine, thank you.

But allow me to digress a couple of days to update the construction project. On Wednesday, Tom turned the open spaces in the framing into windows. Craig came by with roofing samples and I selected a light color that would have to be run through the homeowners' association approval person. Lighter is better for energy efficiency, right? There's a really white eco roofing of some type which is not approved. Not consistent with the rural character, etc. etc. I suspect. 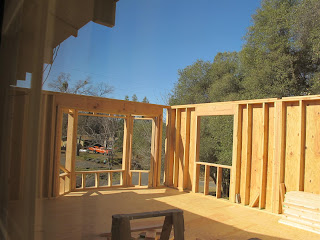 Craig returned Thursday morning with the okay for my roofing choice, and invited me to climb the ladder and join him and Tom in the new rooms once he got the new closet to my old bedroom and the hall and room entries chalked out on the floor.

I'm actually able to climb a ladder up there on my own, but I'm cautious now at doing things like that when I'm home alone. I don't want headlines about "Old Lady Dies in Dive from Construction Site."

I made my climb, carefully shepherded by the guys, up to the floor of the addition. Here Craig is chalking out additional lines and confirming measurements for me. We're at some "last chance" points for making decisions about possible changes. These things will continue to come up increasingly close together. The board protruding from the bottom of the frame is near to the back of my closet. It's the base for that wall. 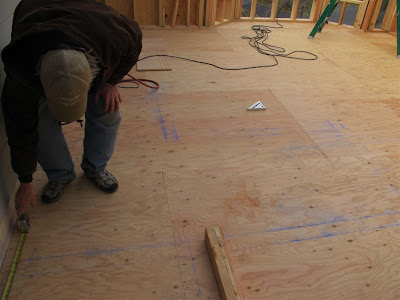 Here's what my view out of the bay window in my study will be, with some extensions on each side. 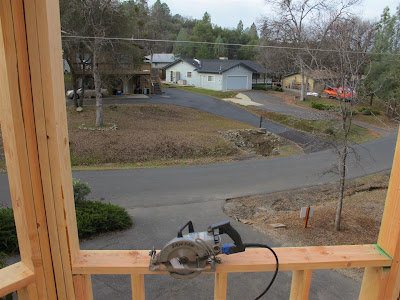 And here's the view out the corner windows of my quilting studio. It will be a shaded, peaceful view, not much danger of sun fading of my fabrics. 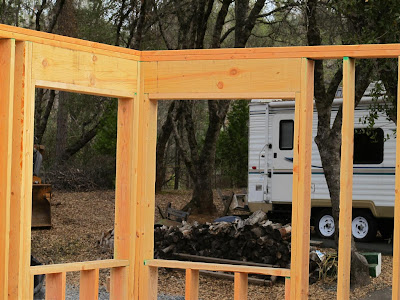 Then off to NeedleCraft's. We have show-and-tell about the week's accomplishments at the outset. Here are more things from Barbara -- the felted wool hat which she wears herself with such panache, and the little green sweater and vest for little twins in the family, a bit too large at the moment, but she's got a head start here. 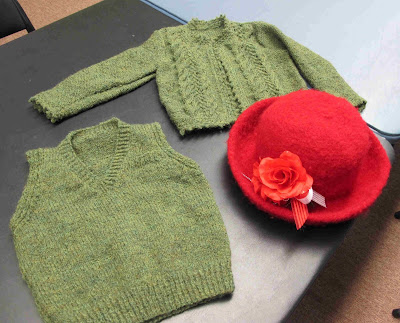 And another cap by Barbara, probably for the cancer center. She must knit 24-hours a day! 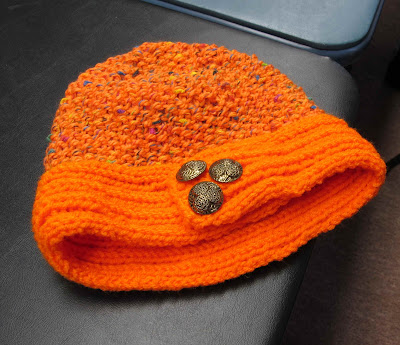 Judy tossed a handful of scarves onto the table and a couple of people grabbed some to model. Judy also acquired all the big bundle of gold-flecked yarns. She's not sure what she'll make with them yet. (Shh! Judy is a yarn-oholic.) 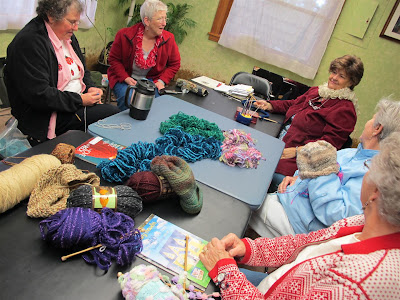 This morning, after breakfast and after the snow stopped, four cats try to catch a little sun. Enlarge and see the look of pleasure on Tiny Kitten's face. Tiny Kitten seems to have a bit of laryngitis, barely able to squeak out a meow. Craig and Tom have not arrived today. I presume they're working on an inside project somewhere. 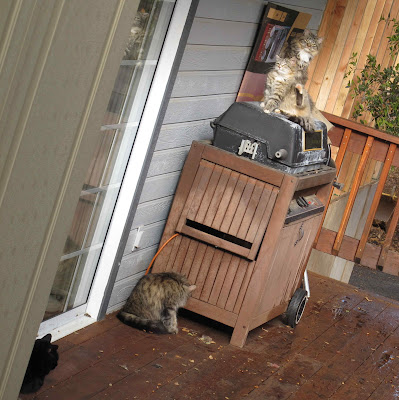 Tiny kitten has found its way to the addition . . . 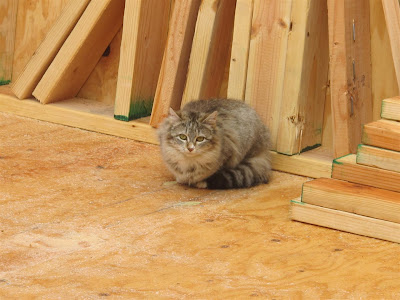 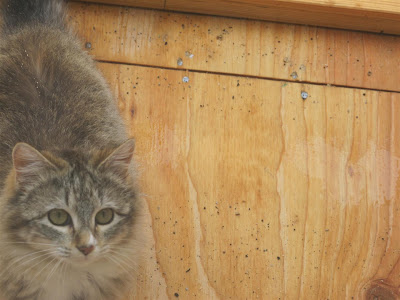 It's time to get back to packing stuff up.