The alarm went off at five-fifteen this morning, starting the mind off on its little stream of consciousness about why. I felt the metal cover over my eye, the cover that looked like a white patch to me when I saw it in the mirror, but like a little steamer rack you'd put in the bottom of a small pot when I saw it in the photo I posted here last night.

Gotta put in two kinds of drops. I'm going somewhere. Where? The eye doctor for a followup of yesterday's cataract surgery. When? Oh, anytime.

Shake awake. There is an actual appointment. Sister-in-Law will call me at seven to see whether I can see well enough to drive. Or not. I touch the eye patch. Everything looks black in that eye. How will I react if it's still black after I take the patch off? That should be a scary thought.

I patted the top front of my head above the patch. The numbness was gone and feeling was back. It had felt like there was tape all over my head, but now I could feel its edges, just on my forehead and not into my hair. I got a warm damp wash cloth and lay down with it on the bandage for a few moments, then began to peel the tape off slowly. The steamer rack lifted away. The view was still black. I felt a cottony patch, also anchored by tape. I tried to peel it but it was on solid. It was going to smart to pull it off. But a glimmer of light snuck under it. It wasn't going to be all black. I could sort of see. It looked like a squinty eye, but otherwise, nothing to look at.

I probably could have driven, but it's a long drive -- about 50 minutes -- on winding roads flashing in and out of the rays of the rising sun. I decided I shouldn't drive, and let SIL do it again. When we arrived, they noted they had gotten my message that we needed to be seen at the earlier of the two slated appointments. (Never mind that little glitch.) We weren't but we nevertheless were back up the hill in time for SIL to go to work.

So. The followup appointment. I was escorted back into the rabbit warren of little exam rooms and took my seat in "the chair." The guy handed me a black plastic thing that had a hole in it to look through with the eye in question.

The usual question: "What's the farthest line down that you can read on the chart?"

This is as close as I could find to looking like what I saw:

I got this off the Internet. I'm given to believe that it's Chinese and not on an X-rated topic. The guy moved to the top of the chart where the Big E at the top was a Big S. There were an E and an L in the second line down. And then it reverted to Chinese on down. He did a pressure test and I didn't think to ask what it was.

The Big Cheese was called in and snugged me up to an eye machine. I can't remember just what he did, but he said my new lens should settle in by my next exam in a week. (I could read the logo okay on a cover over some other machine which was about half as far away as the eye chart.) It was gratifying to get home and discover that I am somehow able to read the computer using both eyes, though neither alone seems to do very well. I can see that light appears much whiter -- in contrast to yellowish -- something many cataract patients have mentioned to me.

When we got home, the guys are removing shingles from my old roof and adding things to the new roof. 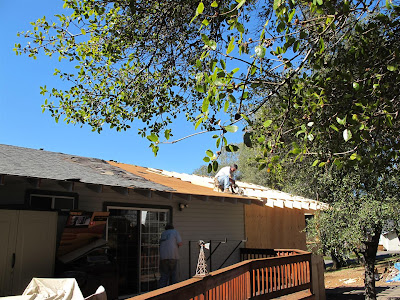 The daffodils in the barrel are cheering up on this sunny, slightly warm day. 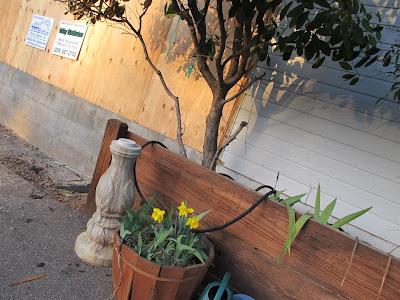 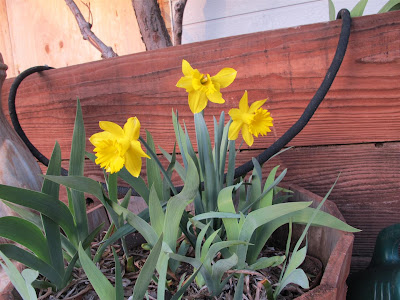 Tom is filling in the edges where the roof extends. The walk around: 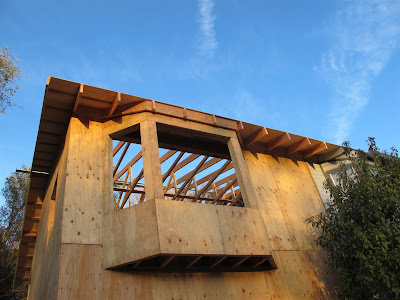 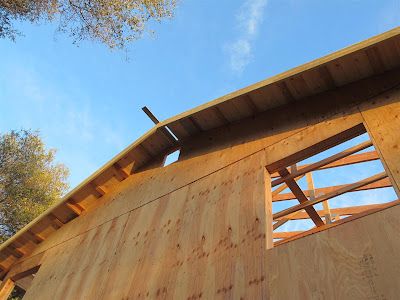 Hah! They've finally taken down my Internet satellite dish! It's been sitting up there doing nothing for several years now. At least I won't have to climb up there and remove it myself. (Is that a vision, or what?) 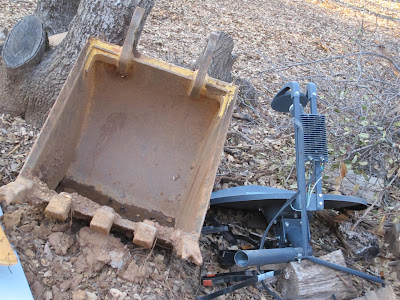 I love the lighting on the house and tree as the sun is setting. 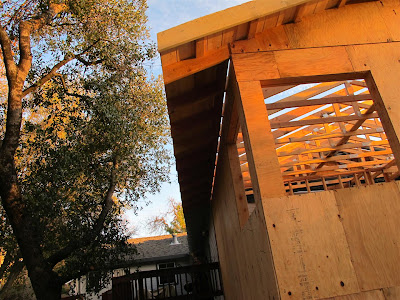 Sister and Brother-in-Law returned to the US this evening from their trip to England. Sister is the nurse and worries about all the family's health, worries about me fending for myself through surgery, worries that I'm seeing Chinese characters on the eye chart. The most difficult thing I'm facing is that I'm not supposed to lift over 10 pounds. I believe I have a couple of cats here that weight close to 10 pounds, and lots more "stuff" to pack up out of my bedroom and study. Not to mention the heavy boxes already in my car that need to be transported and removed.

But I have this little chart from the doctor and I sent it to Sister. I think it's too early to get worried about the eye chart.