Eeny meeny miny moe. I have at least three choices for moving stuff out for the room addition for my Monday tasks: 1) clothes and other stuff -- meds, shoes, piles of who knows what from the closet shelf -- from the bedroom; 2) down quilts, sheets, towels and the occasional quilt project from the linen closet in the hall (it will disappear); 3) finish up with books in the old study, then get on to other papers. I must rescue and move out what I will need during the rest of construction.

Nothing new about these choices, except that the linen closet just filtered into my consciousness. I weigh them every day. There will come a day soon when Craig, my contractor, tells me that tomorrow, he's barricading off my bedroom with bathroom and the old study and the linen closet. When that comes, I assume I'll put on the clothes for the day and grab my pills last, as I walk out the door. Oh, and any cats.

I chose the old study for the day. While I was hunched over boxes, I could hear lots of pounding from Tom the carpenter. When I looked out, the framing to divide the space into the two rooms was up. 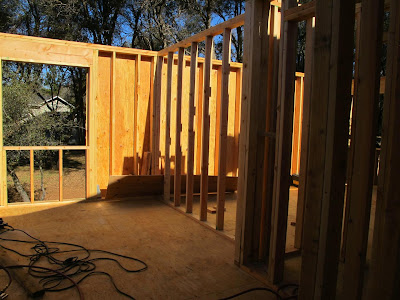 The pounding had moved elsewhere and I heard power sawing. Craig had joined Tom.

Right outside my window on a makeshift desk there was a working plan. It was upside down from my point of view, but through the miracle of photo software, I've flipped it over for readability. Shear Wall Plan. I'd never heard the term until a few days ago when Craig gave me a whole lesson about the covering of plywood on the exterior. It's not just for putting all your nice decorative touches on the outside of the house. It stabilizes everything, keeps all those squares square and parallels parallel against any shifting. (This is my interpretive version of the explanation, so perhaps the technical terms are slightly skewed.)

Tom was sawing plywood upstairs, and Craig was outside nailing up the sheets. 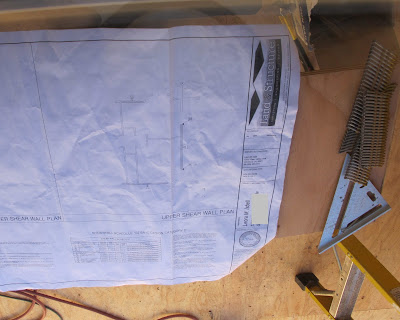 I've almost emptied out the bookcases, probably a couple of boxes of books to go. Boxes of photographs to go in bigger boxes, heavy, dead weight. 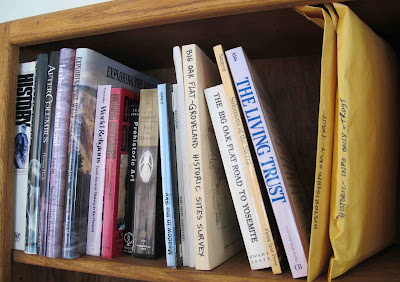 I pull out some skinny folk song books that I missed when I packed the big Alan Lomax volume. Pete Seeger autographed this after a terrific weekend of folksinging ... can't remember whether this was the  high school age occasion or after I got to college since I saw Pete in both places. Click to enlarge and see the photos in a slide show. 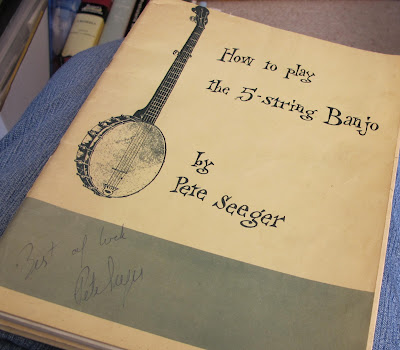 This is how I have to pack books . . . reaching around Henley. All the cats have anxiety about my packing stuff, so I'm shadowed everywhere I go. 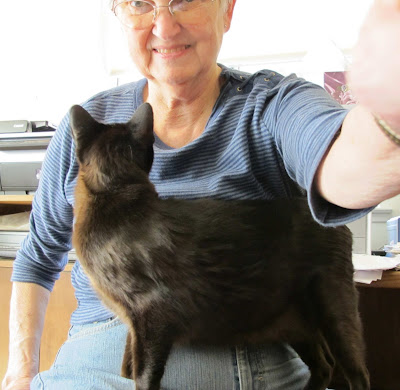 He doesn't settle down and cuddle. He paces around my lap with little pointy feet. 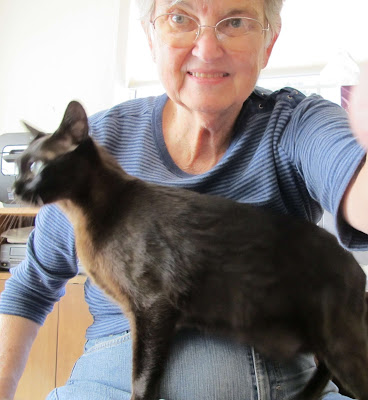 Six heavy boxes for transfer to Sister's Garage Mahal were accumulating in the kitchen, along with big four bags of stuffed animals. Books to be relinquished were in five grocery bags flat enough to slip through the slot for Friends of the Library. The boom box my husband gave me to use to exercise in some other room than the living room filled the front seat of the car, off to the Thrift Shop. (It never got a whole lot of use.) There was one of my husband's high school annuals to take along to size a box at the post office so I could send the whole collection to his namesake son. (The post office's middle sized boxes are all about an inch too narrow for anything I need to mail. Or way bigger.)

I decided to make rounds on Tuesday to deliver all these things to their destinations.

My Tuesday got off to a confusing start when I brought my cup of coffee to the computer, only to discover I'd already done that. Two-fisted drinker. 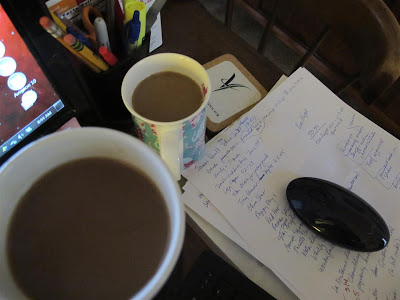 Craig and Tom took their morning break just about the time I wanted to load all the boxes in the car. It was a perfect opportunity to enlist their aid in loading boxes into the back of the car. But I couldn't do that. It's hard for me to ask for help like that if I think I can do it myself. I'll save asking for personal favors for something I really need. Like chasing spiders out of sheds, or keeping an ear open for when I climb a ladder in the next day or two to change a light bulb in the garage door opener.

So I waited until their break was over and hauled my stuff out on a hand cart and wrestled it into the back of my car (SUV). The back seat was filled with stuffed animals that I'd put out the night before so Jean-Luc wouldn't realize that these big animals he's been oblivious to are in fact stuffed animals, the things he cares for for a time, then eats.

I did my rounds: Garage Mahal, library, thrift store, bank (checks to deposit, a reimbursement for construction expenses that ended up on my propane bill), post office. And then it occurred to me I hadn't checked my box that things addressed to my street address go to. I seldom check it. It must be very seldom, because my December monthly paper was in there, along with being stuffed to the gills. I got only one "real" letter (not junk mail), a somewhat delayed Christmas card.

When I got back home, only Tom's truck was there. I could hear pounding and I went to the bedroom window to see what was going on. This was about it. My thought was that he was putting shear wall on the other side of the current bedroom wall. Was the end of my house going dark now? Already my view of the goings-on has become restricted by the new structural parts. My photo shots will be limited to up-shots from the ground? I hear sawing, pounding, a loud crash to the new floor. Peering through my little window slot, I see debris. 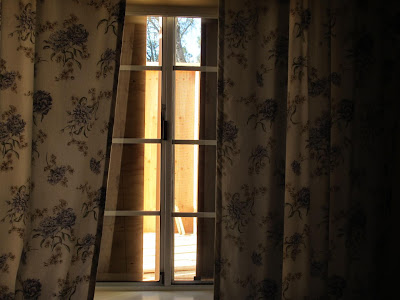 I went outside to inspect. You can see the shear siding all over now. It really makes it hard to see the interior work. There's Tom up there sawing the eaves off the end of the roof. Tom gets all the jobs in high places. 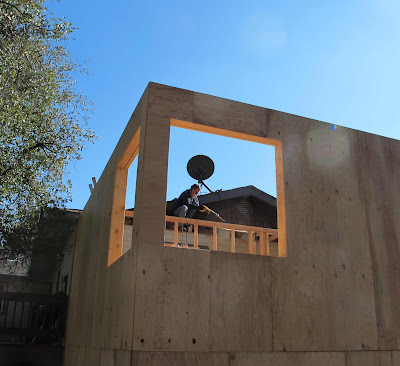 I received the sandals I ordered before the weekend. I have a hard time being fitted in shoes and most of the time they hurt. I wanted a sandal that's a little dressier than my dusty Birkenstock's (if they aren't terminally dusty, they haven't been broken in). I'm very wary of ordering by mail, but Zappo's pays for shipping both ways in case they don't fit. In this case, I ordered the exact same size in a brand that is totally comfortable (Aravon). The weather's a little cold for sandals now, though I did take them out for a photo stroll after Tom left. I guess I'll have to go for the toenail polish when summer comes. And lose the rib marks from my socks. I think the school annuals will fit in the outside shipping box from the shoes. 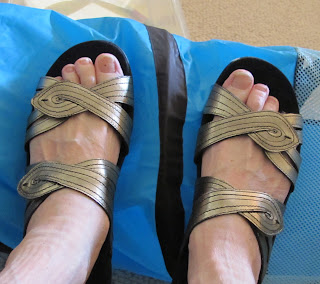 With the shear wall all over the place, it's no longer possible to climb the ladder up the outside and come through the wall. (I did see Craig come in a window once.) Here's the new access point, the hole in the floor. 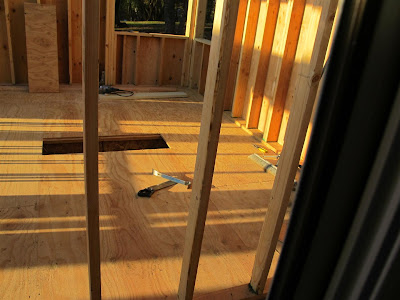 Overview, back corner. In this view, it looks taller than the house, but foundations, floors and wall tops are all at the same level as the existing house. 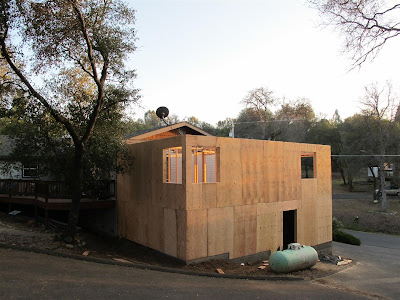 The area where the eaves were cut off are covered by the plastic. And the boards over the bedroom window are gone. I guess Tom put them there to protect the window glass from falling eaves. 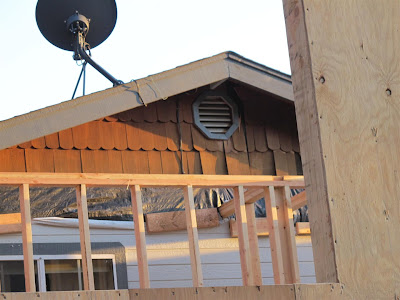 A pile of eaves. 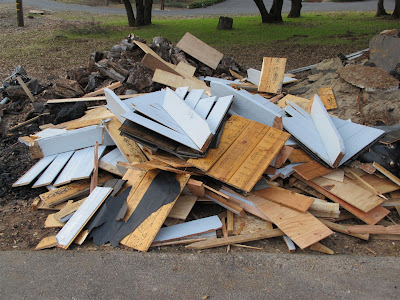 Corner from the street side. 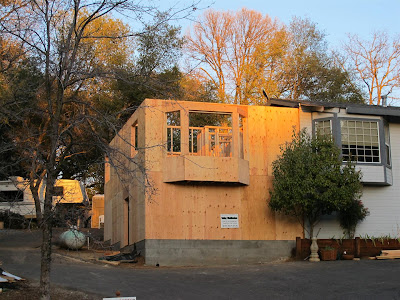 I keep forgetting that Tom doesn't work Wednesdays, so without the throaty rumble of his truck engine, I overslept again today. Mid morning while I was at my computer, the reflection of a trailer flashed on my computer monitor. It turned out to be Craig, who parked along side the addition where I CAN'T SEE ANYTHING THAT'S HAPPENING. I assumed he was working and didn't distract him, waiting until he left to discover what he'd been doing.

My surprise storage room looked clean and neat, outside looking in. 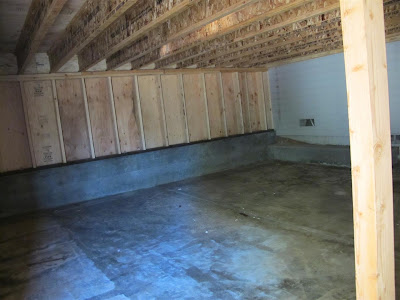 It looked neat, inside looking out. 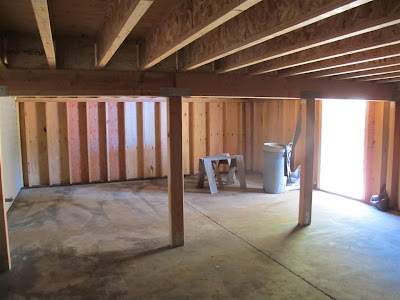 It looked REALLY neat looking out. I know. It may not seem that way at first glimpse. But all the eave trimmings and the scrambled scrap pile under it were gone! What you see there now is the pile of rounds from the old oak tree that was cut down several years ago, and the dirt pile from the excavation which is being saved to fill the extension of the planter box and do other smoothing out. There is also a neat pile of wood scraps for Sister's woodstove and some plywood pieces she and I both said might be useful for something. 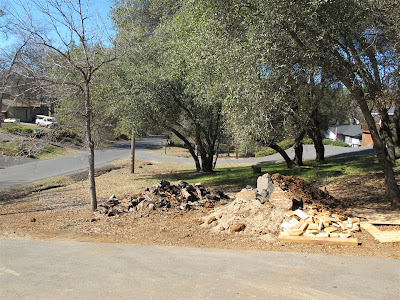 Best of all, he had uncovered the little sprouts from last spring's first flower of spring which were under a board the other day, bent but unbroken. And . . . 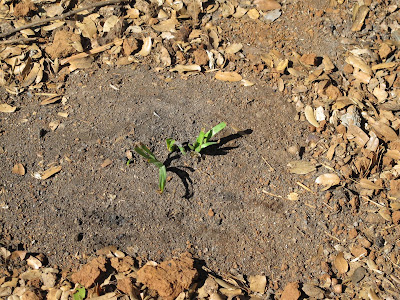 . . . a new little cluster of daffodils and I just noticed buds when I looked at the photo. This year's first flowers of spring! Look at the neat way Craig raked little circles around them. 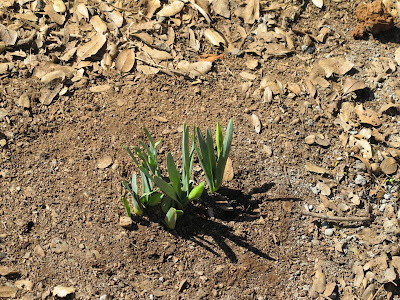