I'm going to skip a couple of days at Yosemite for the moment, and jump into the present. I will go back, because we got to go on a tour of the Ahwahnee kitchen. That's something of a dream for Yosemite aficionados, as we've tried to imagine what it looks like behind those doors that waiters emerge from with their trays of eye-pleasing food. We'd hear that it's as big, or bigger, even twice as big as the Dining Hall. We got to see for ourselves!

We'd had mouths watering for blueberry pancakes in the food court, as full of blueberries as the Ahwahnee's, albeit with a complete lack of presentation but at half the price. Alas, the grill in the food court was closed last week, so there were only steam table non-blueberry pancakes. We were forced to go the Ahwahnee for breakfast on departure day for those of us who had the craving.

Sister's friend El wanted to try the Ahwahnee muesli. She'd acquired the recipe and wanted to see if she liked it. 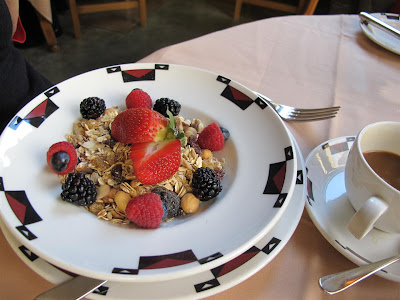 We don't know whether it was marvelous coincidence or some anonymous angel is pulling strings, but they seated us at the Queen's Table again. This time we could see the scenery outside. 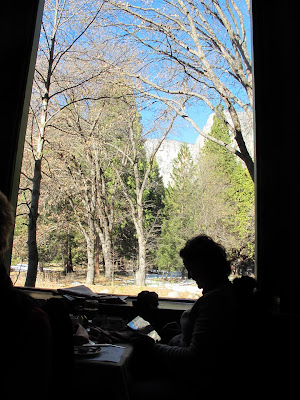 Sister-in-Law is a fan of the Eggs Benedict. 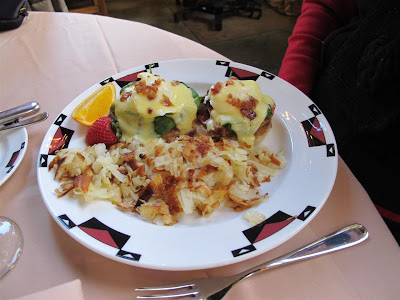 Sister and I each chose the blueberry pancakes (hotcakes, I guess it is that they call it). We also asked to split a side of bacon, but our waiter sheepishly admitted when he brought the checks that he'd lost the bacon, and we hadn't remembered either. Not that we needed more to eat with three fat juicy pancakes. 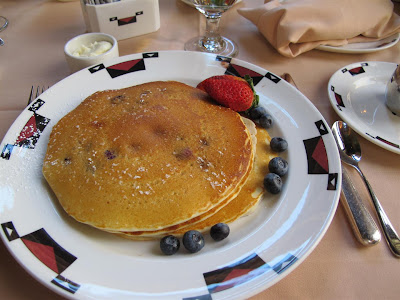 We rolled into my driveway a bit after noon, just as Craig and Tom were arriving from another job that morning, in time to meet with the window supplier. But first, I had to figure out where I had put my keys when we left. Since I wasn't the driver, I'd stashed them in a safe place whose location had escaped me. As is always the case when you find something you lose, it was in the last place I looked. It was as close to the last place I could have looked. Next would have been the hideout key.

Without going into detail, I was in rather a hurry to get in, what with all that coffee and the hour-and-a-half drive home. Then I looked out my bedroom window . . . and there's a floor, eyeball level. One with men walking around right outside my window. I'll have to remember to pull the shades to shower and dress, not that I think Tom would be intentionally Peeping. (Yuk yuk!) 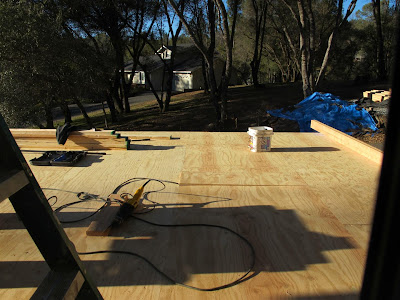 The outline of the bay: 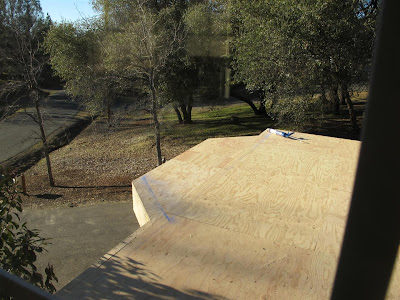 I can talk to them through the window to ask questions. And take pictures. 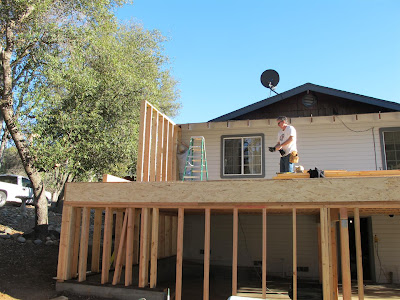 At the end of Thursday's work: 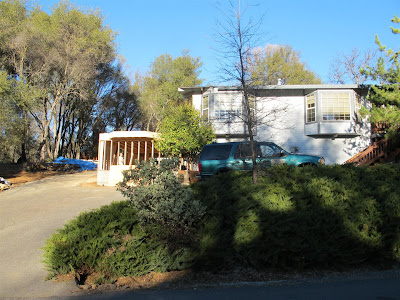 We -- Craig and I -- had our talk with Window Guy. For the new window to replace losing the old window in my bedroom, I got what I'd been wanting since I looked at windows online: an awning window at the top above a lower fixed window. I preferred that to a single hung window right there on the deck with access to my room. And I can open it in the rain. Craig didn't seem to grasp my terminology, but Window Guy was on the same page, so now we're good to go. 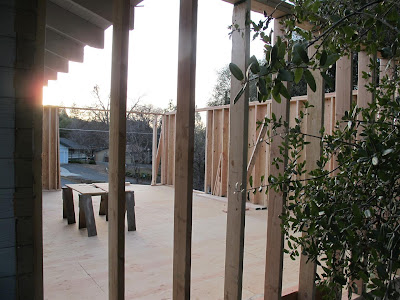 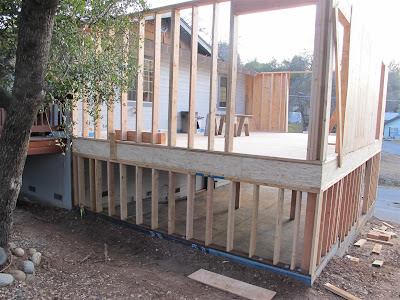 There will be corner windows in my sewing room. Not full length. These aren't framed in yet. 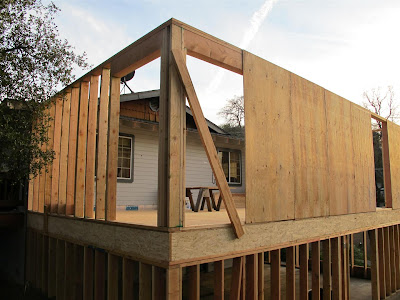 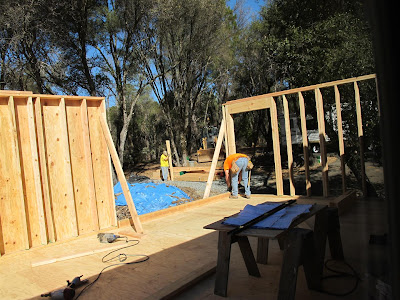 At the end of Friday: 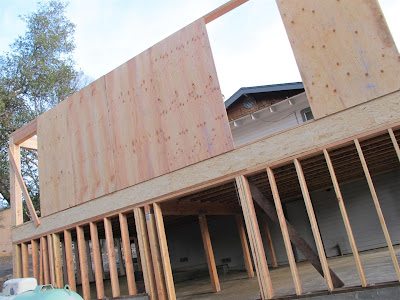 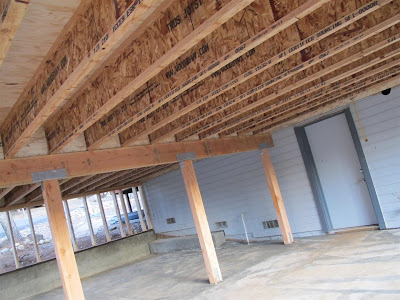 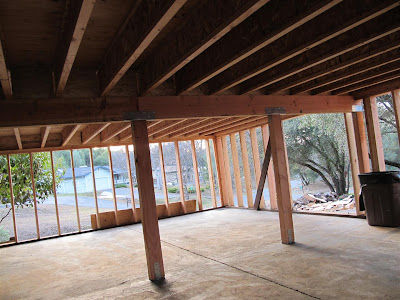 My Internet/Cable Guy came to assess what I'll want in terms of cable/Internet wiring, and moved my modem and router out of the way of construction and into the rat's nest of wires and cables behind my TV in the living room. I have put so many splitters on the line (as did the cable company) that he had to do some fiddling with the connectors to get me a clean TV picture. He also talked with Craig about the electrical wiring to give me a separate circuit for my computer equipment so it won't be sharing with irons and sewing machines.

I'd figured I'd also replace my existing 25-year old roof when the roofing is put on the new addition, but Craig delivered the news that not to do so was barely optional, so he would have an estimate to me from the roofer by Monday for a complete job vs. just the addition. While we're at it, my gutters are pretty rusty, so he'll get an estimate on that at my request. I've had some leakage issues with them as well. Each of these would require Change Orders, the favorite words of the homeowner. To be fair, these are not surprises. We discussed in advance of the whole project that certain items that are not integral to the addition itself would be addressed with Change Orders, and I have a mental cushion in my budget for them. Wait til we get to the parts about repairs of cracks in the walls in the main house, interior paint, and new carpeting! I literally haven't done a thing along those lines in my 24 years in the house.

So I have decisions to make by Monday: the depth of the two linen cabinets that will replace the one I'm losing, and the exact locations for the plugs for the separate computer circuit.

Craig came by today, to my surprise, mainly to measure the gutters so he can get the estimate. He had the estimate for the roof. I'll sign away on that for Monday.

With all this excitement and changes, I wanted to jump back into this and return to the Ahwahnee kitchen tour later, not to mention the luau Thursday evening in Our Little Complex.