Fiddler, er, Carpenter on the Roof . . . and Thursday Out


Last day of February . . . Things have come along with the room addition. I'll catch up with today down a photo or two. Here's where the month started. 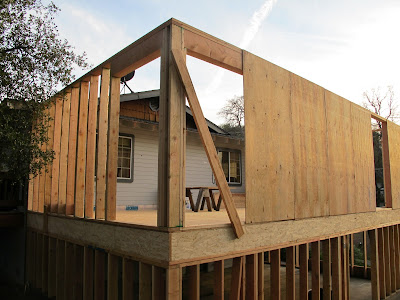 Wednesday was day off for the guys. Craig, my builder, has had his eye on the weather forecast, because we're coming up on the roofing project. My house is about 25 years old and its roof is at end-of-life, so I made the decision to have it replaced at the same time the roofing is put on the new addition. Soooo . . . things must be scheduled . . . in the right sequence with the right workers and suppliers and with the required building inspections, while avoiding rain while the old roof is off my house. And don't forget the weekend. And keeping the homeowner (me) apprised of the schedule.

Wednesday I ventured forth for my first driving since the eye surgery. There's still a pile of plow snow at the post office. 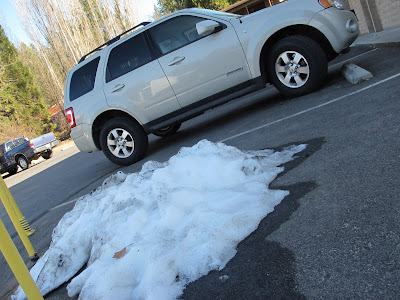 I also stopped at the grocery store for orange juice and ginger snaps and came home with four bags full of groceries, including an unprecedented number of veggies, which would lead to the dread c-o-o-k-i-n-g. I guess I'm inspired by my two Ninas, blogger/professor Nina, who at the very least posts a  colorful breakfast on one of several delightfully set tables every day (at home or abroad), and Facebook/quilter Nina, who puts together gorgeous one-pot meals that she pops in the oven for after work. All magazine photo worthy. I'm feeling a little pleased with myself for merely making stir-fry that I put over my favorite rice: a mixture of brown and wild rice. Better yet, this will last at least three meals. The rice takes quite awhile to cook but low effort, while the stir-fry takes lots of rinsing and a little chopping, but cooks really fast. If it weren't for dishes . . . 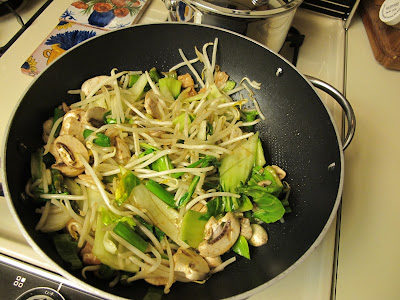 Today, Thursday, is NeedleCrafts day, so I was up and dressed by the time Tom's truck pulled into the driveway with its throaty rumble promptly at 8. Not too much later, Craig rang my doorbell.

"Gotta move your car and your truck. The roofers are coming through the gate right now. They're tearing your roof off today."

Woo hoo! He did the moving for me. The schedule for the day was to get the plywood on the addition and the shingles off the house. The inspector would come Friday morning and the roofers would be there to install Friday and Saturday.  Gosh, fingers crossed about the inspection. Things look pretty sturdy to me. Then, he and Tom might have a little time to do some "honey-dos" they've been offering and I wondered if they'd forgotten. No, not really. Craig's wife has honey-dos for him, too, so she's first in line. 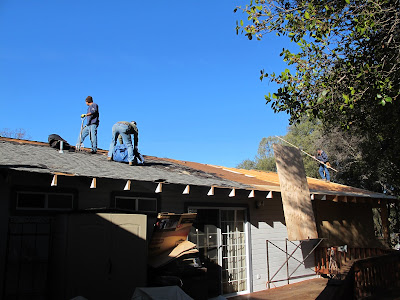 Craig, meanwhile, was toting plywood onto the deck where Tom would pull it up to the roof. 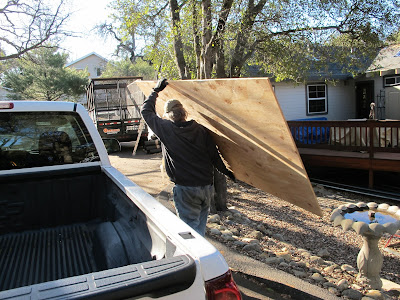 Tom was filling in edges. This view inspired my Fiddler on the Roof reference. 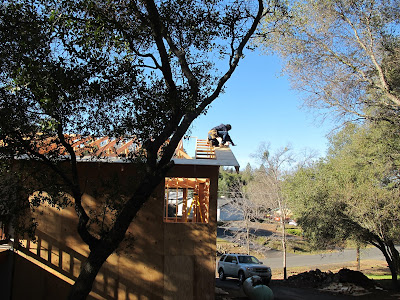 The plan was for me to spend my normal Thursday at NeedleCrafts, then run to the Little City Down the Hill to stock up on big bags of cat food for the feral cats, which the guys would lift out of my car for me, and pick up a special battery for the garage door battery backup system. It's been beeping every thirty seconds for two or three days now and a little display on the wall control tells me in French to replace the battery now, see the instructions in the manual. Another job for the guys.

Still snow at The Little House where NeedleCrafts meets and Senior Lunch is served. 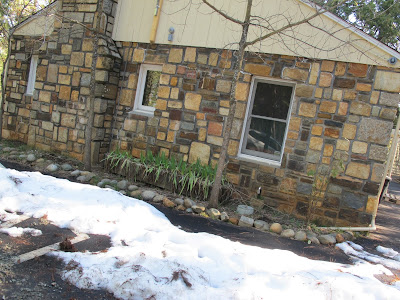 One of the ladies came last week with a whole lot of partially completed knitting projects she's getting from an elderly relative and several here have taken on completing the projects. It really touches my heart that they're able to pick up this lady's work and bring it to a finish for someone to use. 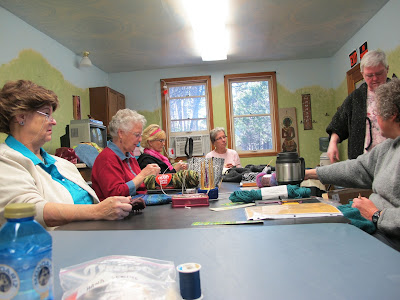 A few weeks ago, "Grandma Rose" brought the grandkids' three year old dog Fang home to take her (Fang is a "her," unlike Phyllis Diller's Fang) to obedience classes. Fang graduated the other day and came in to meet us before saying her goodbyes to the mountains and going back to her family in the city. 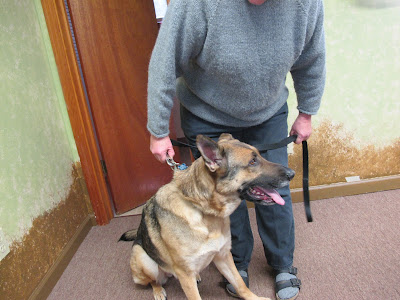 I did my errands in the city, then came back just as the roofing people were gathering the last of their tools and debris up to leave. Tom was still pounding nails on the addition roof, but finally he finished and got the cat food bags out of my car and brought my truck back to its parking place.

And here's our progress to the last day of February. 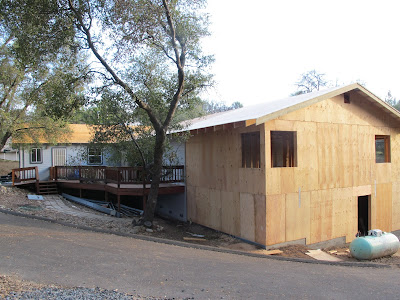 But what's that in the sky? Those aren't precursors to rain, are they? Fingers crossed. 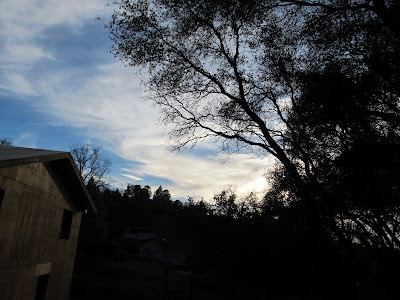 When I went in my bedroom the view out the side window had darkened. The roof has made quite a difference. This is the view into the quilting studio. 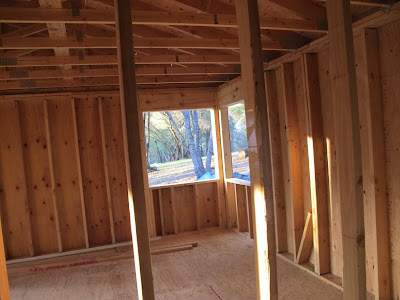 And here's the view into the study. 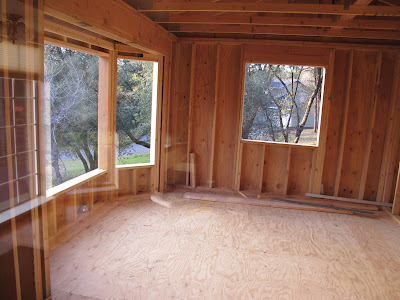 I thought work was over for the the day when I heard the sound of loud trucks in the street and coming up my driveway. Men were heading for the backhoe, which has been parked here since the beginning of the project, New Year's Eve to be precise. I raced out to thwart possible backhoe thieves, but then recognized the backhoe owners and operators who swarmed in and moved it and the extra bucket I think I posted the other day off in just a few moments, bright lights flashing in the darkness. Rather other-worldly. 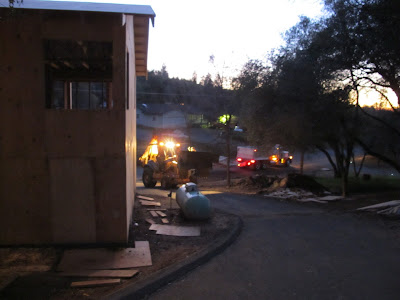 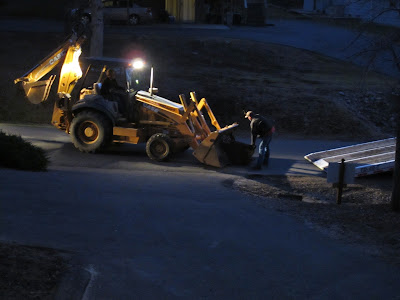 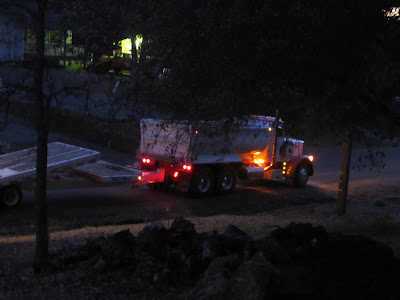 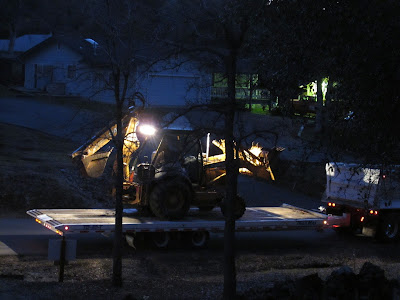 Time to get to bed. I have to get up early while my helpers will (hopefully) be available. If they can, they'll disassemble my Organizer Bed -- built-in drawers underneath. I've got a taker for it. I'm at the age where I had a taller toilet installed and need a lower bed. It has to be moved and stored anyway, so it seemed like the ideal time to make a change.

One little change -- room addition -- just seems to lead to others, doesn't it?