A Fine Excuse for Kicking Back


First, I've been watching a race between the little clump of daffodils near where last year's first flower of spring bloomed, and a clump growing in a barrel that got displaced displaced by the construction that I more recently discovered.

Yesterday, the clump in the barrel won. I use this to start with because the first picture shows up thumbnail on any blog link and  these are more attractive pictures to show up for the post than would the real reason for the topic of this blog. 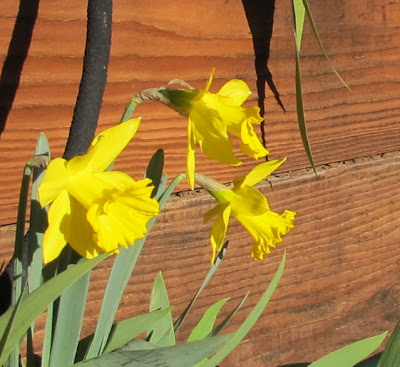 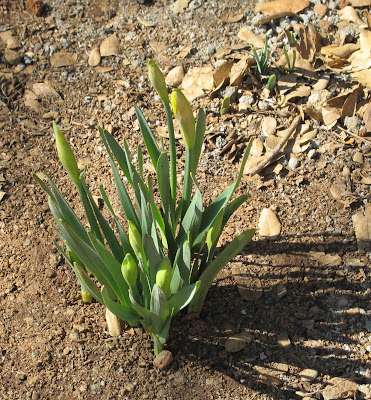 This morning I had cataract surgery on my left eye. I have a big metal bandage over it and my list of instructions. I've been hearing from so many that it's so easy these days, so when I arrived at the ophthalmologist's office early this morning -- Sister-in-Law as my designated driver --  I answered the repeated question of whether I was nervous with a "no."

I also heard a variety of stories about aftercare, which has also changed dramatically through the ages. I can't recall whether my father had to stay in the hospital after his surgery, but I do remember that he had to be very careful not to lean over for something like a couple of weeks.

People who've had more recent surgery reported three days with an eye patch, and a variety of days for not being able to lean over.

My pre-flight, er, pre-surgery, instructions were to do eye drops four times a day for two days before and a drop on the day of surgery. No restrictions in diet and no need to fast, although I would be getting the lovely remember-no-more drug Versed and a local of some sort so I wouldn't feel the surgery. So I set my alarm for 4:45, showered, washed my hair, no make up, a blouse that buttoned down the front, no camisole, bra okay, took my morning meds and the eye drop, ate some breakfast and SIL picked me up a bit ahead of time and whisked me to the Little City Down the Hill and we got there in fine time.

As I got prepped -- pulse-ox, blood pressure, heart beat, multiple eye drops to dilate -- I heard another person in the next curtain, ahead of me. It was a man who chatted occasionally with the next person I'd be handed over to. My nurse inserted one of those needles in my hand that they use to dose me with the Versed. I asked her what it's called and she told me. Can I plead that the remember-no-more drug as the  reason I can't remember what? There was something about hep or saline.

I added another really good reason for enjoying single-hood to "complete control of the remote": No one snoring next to you in the bed. I kept wanting to poke the guy on the other side of the curtain to shut him up.

As to the surgery, I think I was seeing them tug on my natural lens and gradually pull it away. I missed seeing the new lens being inserted and the ride back out to recovery. I awoke with this: 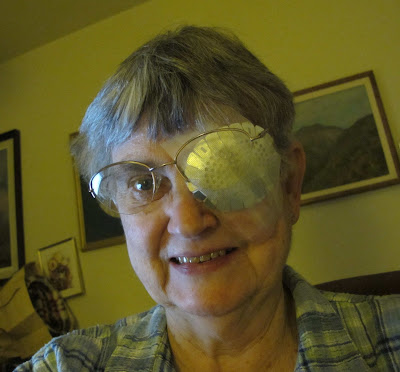 It's pretty hard to keep the glasses on at an angle where I can read. There's almost nothing I can do but watch TV. Not too bad an evening for that. I take the patch off in the morning, put in two kinds of drops, and if I think I can drive myself in for the followup exam, I can do so. Otherwise, SIL is standing by. There's no problem with leaning over, but I'm not to lift anything over 10 pounds for two weeks. There are already two boxes in my car for transport to Sister's Garage Mahal that are way over that and still more to pack. That probably runs me past my deadline to be all packed up!

Meanwhile, I bring you cats.

Tiny Kitten and one of the others, warming in the sun after a really cold overnight. The patio table under the cover is their shelter at night and their rooftop deck in the day. 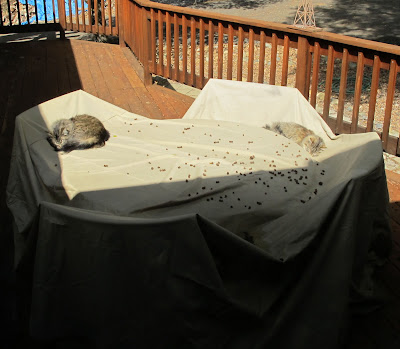 Tiny Kitten, Barefoot and the greyest one is either Sox or Extra. 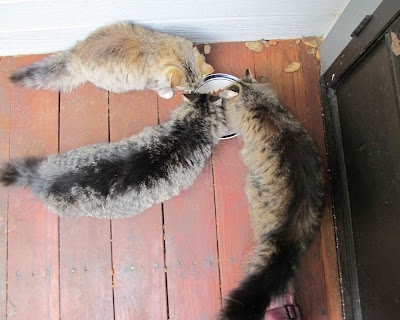 Chloe in an unusual resting moment on the cat tree. 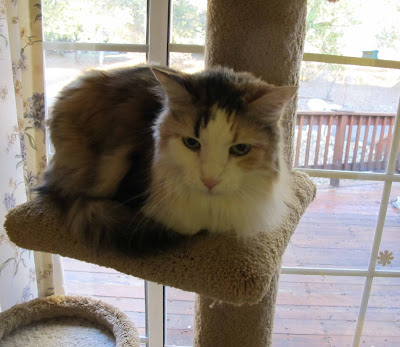 And then, when I was able to walk around a bit, I took some pictures of today's construction. There's some ugly stuff, shingles that were torn off the existing roof along the edge where the roofs for new and old will join, and rain gutters removed and tossed down, but there's some new stuff too. 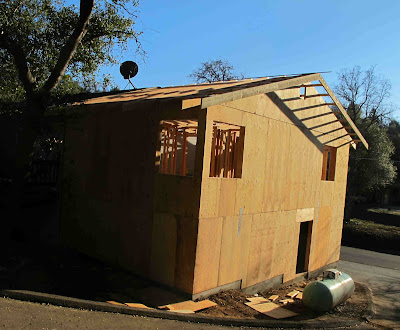 And some cute little details over the bay window: 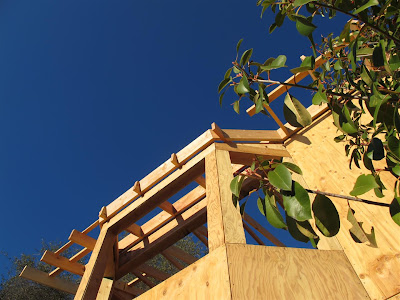 And now back to Kicking Back with TV.