A Bit of Sunshine on the Subject


The construction pause continued from Thursday afternoon all the way through Friday. A little sun came out late Friday, but it had rained up until then and I suspected the guys were sticking with an inside project somewhere, rather than break off for a little work on my room addition. Soggy and cold outside, I didn't even get out to take photos of what had been accomplished on Thursday before the rain began.

It was freezing when I got up Saturday morning. More than freezing, it had "warmed up" to 27° when I bundled up to go out and feed the feral cats. An hour or so after their breakfast, the sun had hit the corner of the deck and this little furry bunch warmed and groomed for as long as it remained on their toasty spot. 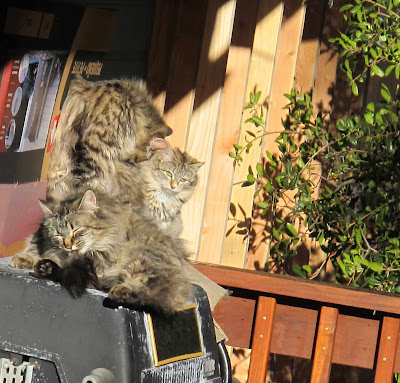 Inside cats also have their ideas of cold. I'd left my bedroom window open a few too many inches overnight, having failed to process the cold weather warnings. But the cold air didn't get to Henley, who was plenty warm in the kitten room. He still spends his morning on the heat register, which doesn't help much in heating the room.

I didn't even take a picture out the window until I'd showered and dressed and it had warmed up, sort of. There's a whole new maze of framing. 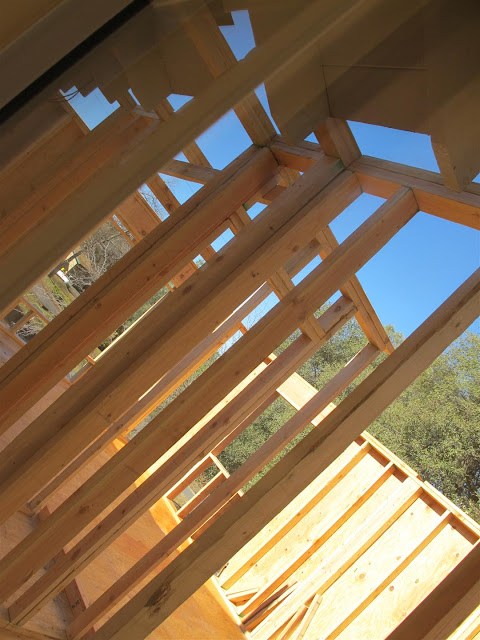 To locate you a bit on what I refer to, the turquoise (see plan below) is the existing exterior wall of the house and the part that says New Hallway at its left is my current closet. The pale red is the new framing, the back of the new closet, the enclosures for the new linen closets to replace one being taken out out of view to the left, and the niche, or alcove. I should have run the red across the front of the cabinets and the open doors, since there are headers above those. The bottom of the plan is what I call the back side, and the bay window is on the street side. 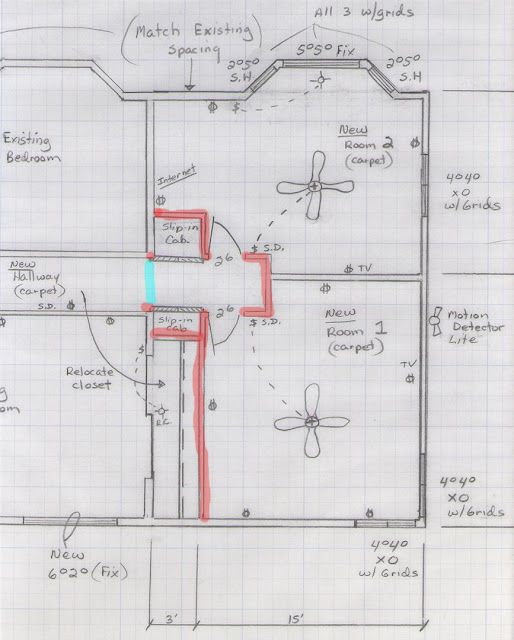 So I pan down a little to see where the new hallway protrudes out beyond the back-of-the-closet wall. 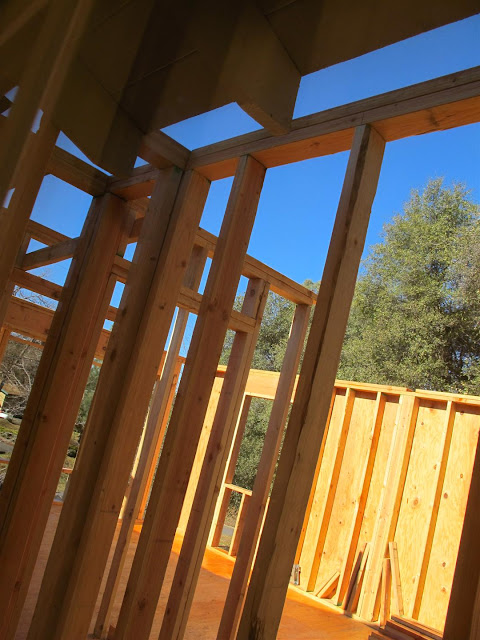 Finally, the fully upright view. Be glad I'm not showing you my boat-in-a-lock photos, where I take another photo for every 3-inches of rise in the water so you can see exactly what it looked like. 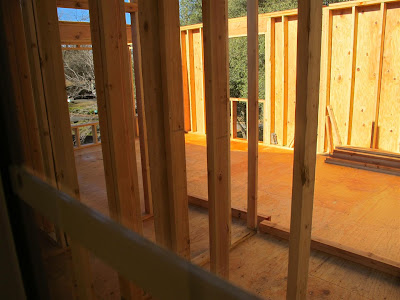 When we were designing the addition, Craig was concerned about the l-o-n-g hall that extending it for another room's length would create visually. The current hall ends in the oak cabinet linen closet, which creates some visual interest, but a dead-end just bored him. I think Sister and I collaborated in the idea to locate Saint Francis there. The concept has grown. He'll be set back into a niche. Craig will make it more niche-like by making a set-in smaller than the dimensions of the hall.

Sister and I spotted a lovely trellis at Orchard Supply one afternoon, possibly even before the room addition was officially signed for. I thought about it for a couple of days and we went back to get the trellis as a backdrop for Saint Francis. Now I'm pondering what the backdrop for the trellis should be, wanting something to hint of an old time outdoor setting without being hokey. I'm thinking something resembling a stone wall, then suddenly thinking that I could have a real vine climb the trellis. Wondering how I could also have a vine the cats didn't eat or use as a litter box. 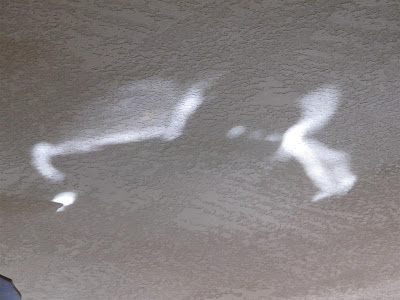 I've never seen this before, nor anything like it, and have no idea what light was reflecting off to do this. It was so weird, I had to take its picture. 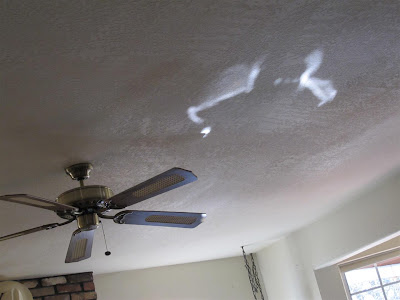 It was finally "warm" enough and dry enough after lunch to trek outside for photos from that angle. Sorry, no guys to guard me while I climb the ladder to get an eye-level view. So here you see the framing for the doorways into the rooms protruding out into the addition, as seen from the back side. 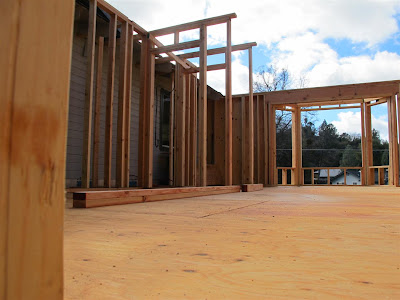 This has to have been taken from inside the house, out the old study window, generally with the view from the bay window end. 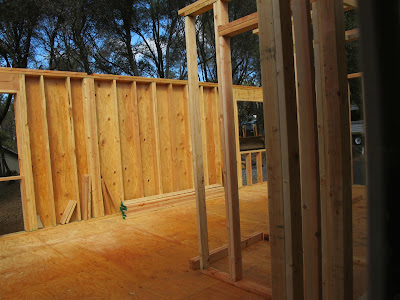 Standing at the back of the addition on the outside, I'm looking into the new closet. 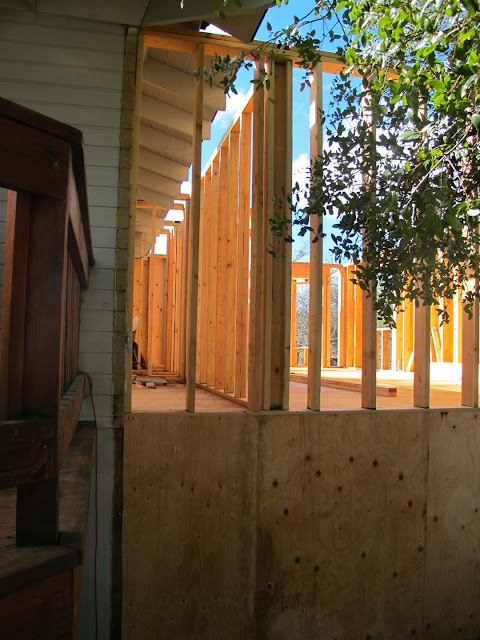 Moving a little toward the west I'm looking from the back to the street side. 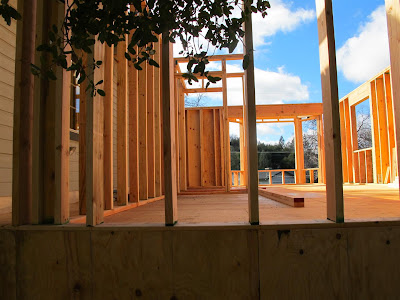 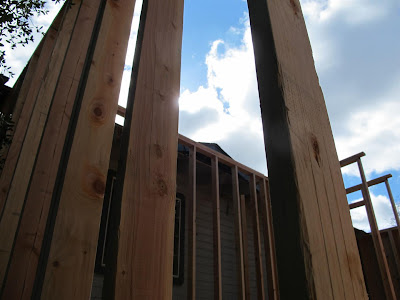 Shooting into the sun. 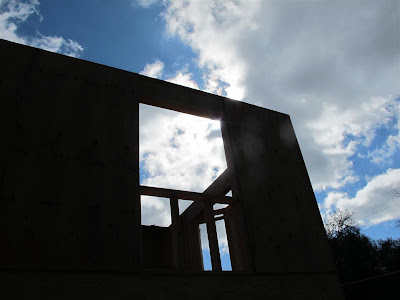 Imagine that! The plywood flooring leaks a little. 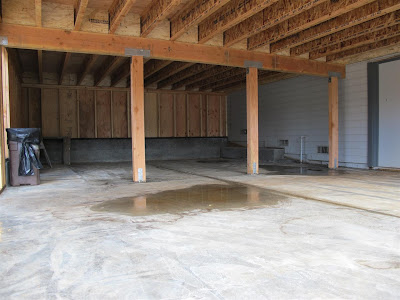 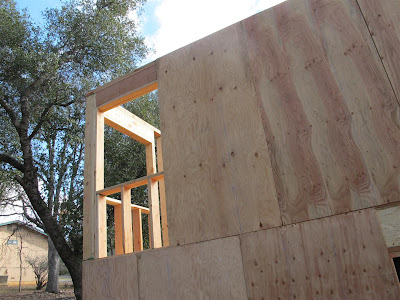 In between photo excursions and in the evening, I'm back to packing boxes to move out of the old study and bedroom. 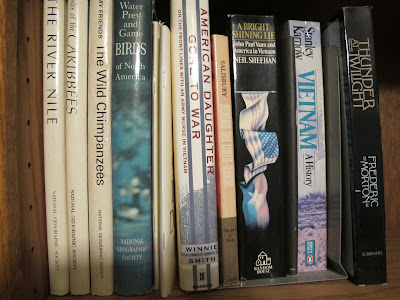