Thursdays Out . . . Yet Another Thursday


I'll start with a follow up to last Thursday's hats to be felted before I recap the rest of the week. It'll give a change of pace to start the blog with something other than a construction photo. Never fear. There will be construction photos. Knitted hoods went home with Sandy last week and came back felted hats. We went back to our normal sewing room for NeedleCrafts today, which had been flooded out several weeks ago when a pipe burst. Repairs aren't complete, but it's easier to heat than our substitute room, and is usable. 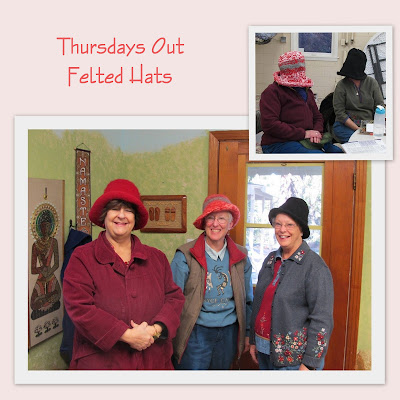 It had been soooo cold for days, maybe even into weeks. Overnight lows were in the low 20s, not unprecedented but certainly unusual. I remember its happening in the early 90s, when it wreaked havoc with our boat engine and RV plumbing. It has been cold enough in the daytime to need a down vest and jacket and to wind a scarf around my head and neck.

I've been planning to sleep in the RV when the time comes to actually merge the room addition into the house, although it occurs to me I may need to camp out in the house until the temperatures have moderated enough not to freeze up the pipes in the trailer.

The slab, poured last Thursday, has been under wraps since then. Not having any knowledge about cement drying, I'm wondering what's happening under there in the below freezing temperatures.

On Sunday, there was no construction going on. I had a couple of tasks in mind to get ready for vacating my bedroom and office for the duration. One was to remove all pictures and paintings and move them to Sister's Garage Mahal. I started taking down the largest paintings, rolling dust off the backs with my little lamb's wool duster (or something fluffy) and leaning them along the hallway. I taped a template for a new window in the bedroom on the wall to study whether I like the proposed size and placement. The template is white. The wall is off-white. It's not providing me much feedback, but I do need a window.

I was doing fairly well. Gradually, things began to happen. By which I mean an escalating series of power failures. I had been at the computer for an early flicker. I have installed an Uninteruptible Power Supply thingy on the power cord, giving me enough backup to allow time for a systematic shutdown. I started to shutdown, but the power came back on before I finished so left it running. Just a bit later, the UPS began to beep again, and this time I had to shut down. The power was definitely out so I left the computer and went back to the picture project.

That outage lasted about an hour and My Gal Friday's hubby, Summer Circus Guy arrived to clean my rain gutters just after power came back on. He said a car had knocked down a power pole on the roadway behind my house and there were wires splayed everywhere, emergency vehicles on scene, and the road was and had been blocked for quite awhile. It appeared the power company was switching power on different grids to different areas to keep people up as much as possible. While he was up on the roof, it went out again. This was around one in the afternoon. Rats. Off with the computer  again. He'd also had to chip ice out of the gutters.

Even though I could have continued with the picture project, with the power out I lost momentum. I went in around three to try to restart and looked out the window to see a truck come up my driveway -- they're working today? I wondered -- and head off into the woods on my property!

Here they are, backing back out. You can't get anywhere from here. 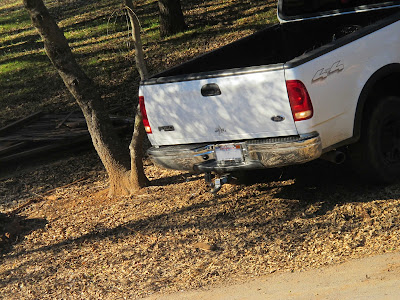 Initially, it seemed very suspicious that someone was trying to gate-hop to get out of our complex. Of course, my camera was handy -- as in dangling around my neck -- and I began to photograph this prospective criminal. (When you hit the treeline up there, the property beyond is unnavigable.) He, the woman in the passenger seat and the truck were pretty clean-cut, however, not resembling our usual local burglar. 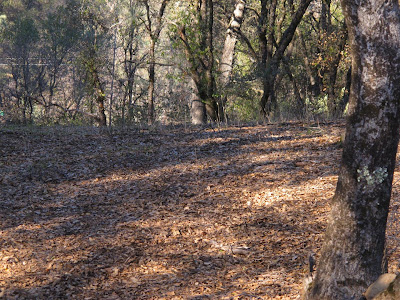 He backed out and turned into the street, stopping to talk to to another truck coming up the street.

Call it in? Don't call it in? In retrospect I think he may have been trying to get around the blocked roadway outside the complex. At least I had pictures and a license number, just in case.

I did manage to get back to taking down photos in the bedroom. I took this photo in the event I want to put them back as they were. 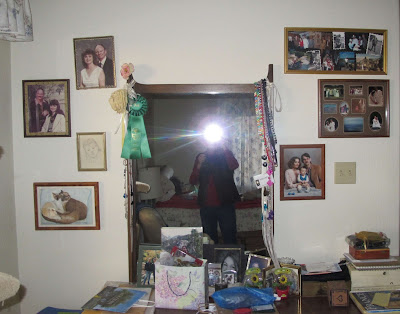 Eventually I lit a fire in the wood stove. It would be a cold night if the power didn't come back on and it was already getting quite cool in the house. It was also starting to get dark outside (and inside) and I headed for the usual lighting devices, only to NOT be able to find my favorite, the headlamp. I was frantically searching for it by itty-bitty book light to no avail when the lights came on and the heater began to heat up.

I gave up and went to bed when the power went off again about 12:45 a.m. I think I remember reaching out to turn off my bedside light when it came back on, without checking the time. When I came out to the living room Monday morning, the TV and lights were all on.

Monday, the excavation guy came to make a trench for the new propane line alongside the foundation and across the driveway . 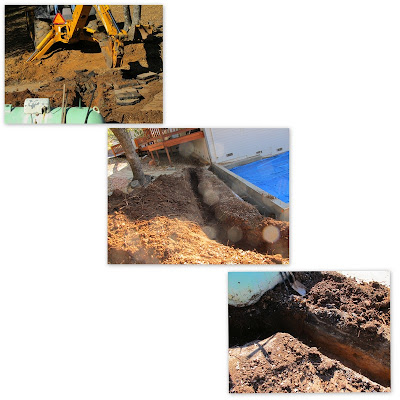 I went to the Little City down the Hill to see the spine doctor. I told him it was less complicated to get the cortisone shots for my SI joint from my family practice doctor, but still have the option to have it done by the spine doctor at my discretion.

Monday night Daughter came to collect her car and return my truck and have a quick visit. She was off early Tuesday morning for a business meeting in the San Francisco Bay Area and a subsequent quick trip to Mexico to take care of some business and maintenance work for a property she owns there.

On Tuesday, I went to Soroptimist. Here soup and sandwiches are being delivered for us from Dori's Tea Cottage. Yummy corn chowder! 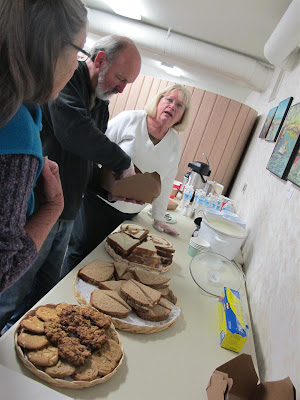 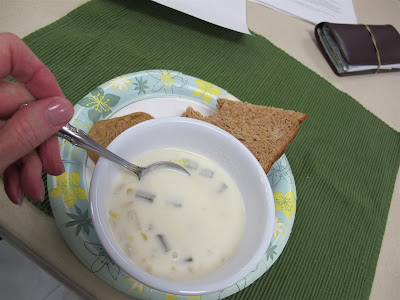 As I was leaving for Soroptimist, the propane guy was running a line for the propane. It was mostly done by the time I got home 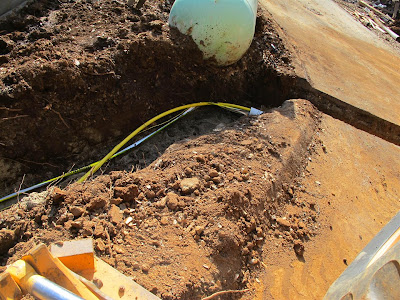 (I just really like this picture of the big wheel next to the chunks of asphalt that had been dug up out of the driveway.) 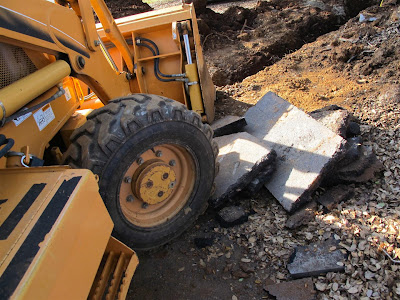 There was a very small crowd at the computer club Tuesday evening. Several people had called in sick (the flu???) and the frigid weather didn't exactly encourage getting out at night. We were supposed to bring our Christmas goodies (electronically speaking) for show and tell. I brought my new GPS (Garmin Nuvi 2555) and got some rudimentary instruction on using it. It's a little different from the TomTom I'm giving up, so I'll need to learn it one of these days.

The building inspector was due Wednesday to inspect the pressure in the propane line. Here's Craig, my builder, tidying up for the inspection early that morning. Now that I had my truck back, my job was to bundle up the recyclables for the recycle dropoff station and the trash to take to the dump transfer station. That task was getting truly urgent. 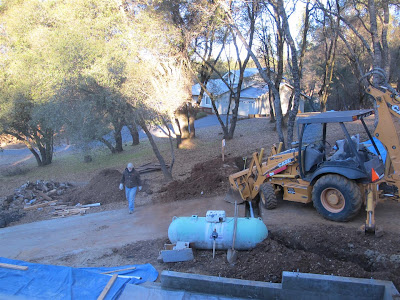 The building inspector was just leaving when I got home and Craig told me the pressure check had failed inspection. A call to the propane company said no one was available, but the propane guy was back a little later, presumably remedying the situation.

Thursday's original work plan was to backfill that trench, but another inspection would be needed. Lumber delivery is due Friday afternoon. I was away all day, at NeedleCrafts, then to the Little City Down the Hill for my annual mammogram.

Okay, so I goofed off for the rest of the day. Finally, a trip down the hill was timed right to go to a movie without any time-wasting in between, so I took in Zero Dark Thirty. My lady friends' reviews have been somewhat less than enthusiastic, but if you read my earlier discussion of my odd movie tastes, you wouldn't be surprised to hear that I was fascinated by this movie. I have several unscheduled days ahead which I must use for my packing project. No excuses!