When I built the Organizer Bed -- many years ago -- it also had built-in bedside tables, so the old bedside tables got moved into the soon-to-be-old study and came to serve as pedestals for some shelves and cubbies to store quilting supplies and equipment. It appears I just moved the side tables without checking the drawers. I found a blood pressure cuff and flashlights which I've since replaced and a few other things I've managed to forget already.

I also found these Polaroid cameras on one of the shelves. One is slightly used, the other brand new. We got them just before the digital camera revolution, intending to give one away as a gift, when suddenly . . . everything changed. The film has probably gone over the hill, but does anyone out there collect prehistoric cameras? I'd consider a placement in a good home! 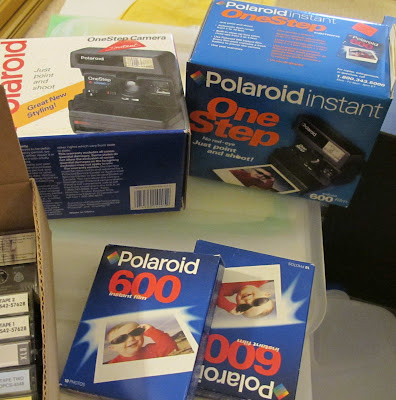 I didn't know whether to expect any activity today on the room addition front. I planned to pack up the quilting stuff residing in the study and add it to the shed pile. But first, I rolled all the boxed and bundled pictures out to the car. The car is stuffed and perhaps I should have put it all in the truck, but one of those boxes had already been loaded in the back before the truck came home, soooo . . . In any case, I went back to boxing up and will haul the stuff to its storage destinations tomorrow.

Mid-morning I heard a door slam and spotted the concrete contractor's truck parked out front. He was removing the tarps from the slab. By the time I sauntered into the bedroom with the camera, he'd left, but he had watered the slab. You can see the reflection of the trees from across the driveway in the water. 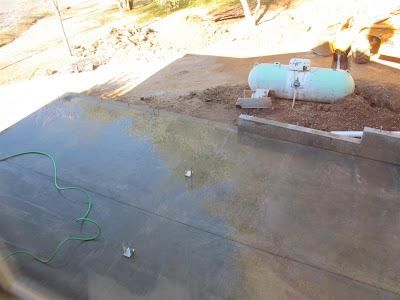 I wondered what the heck the yellow reflection on this end was. It's not the bucket, and much later it finally dawned on me that it's the big yellow Case 580 Super M. I know building is slow this time of year, on top of the lingering effects of the recession in housing, but the Super M has been at my house since groundbreaking, so either the owner has more than one, or business is really slack. 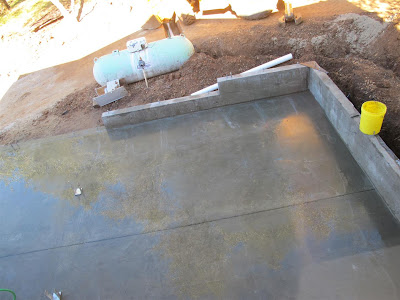 It has almost dried out by four o'clock, so I go outside to check it out. 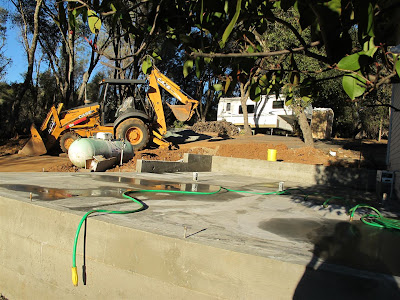 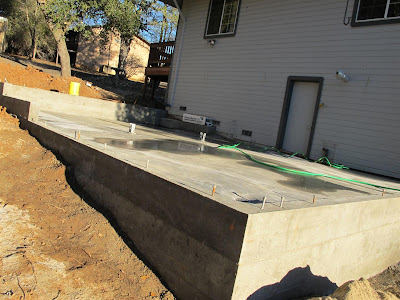 Our word on Friday for January Photo A Day, a photo challenge I participate in, was "shadow," so I was primed to notice the long shadows cast by the nuts and bolts . . . 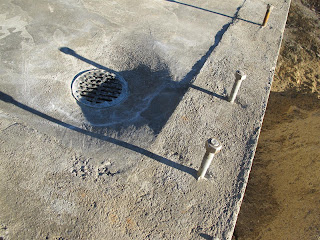 And a really long me! 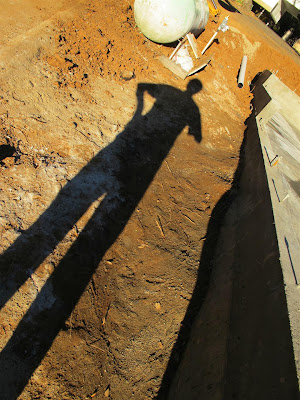 My back finally had it by 7:30, so this awaits me in the morning, just as I abandoned it. 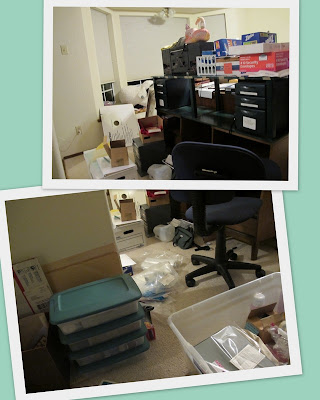 I've been thinking about those old bedside tables. They hold so much more than the one little shallow drawer on each side on the organizer bed. My faux Temper-Pedic mattress is quite thick, making a really tall bed with the Organizer Bed. Pondering whether there is a way to make the old bedside tables a wee bit taller and ditch the built-ins when the bed is moved . . . something that doesn't look goofy and that doesn't prevent my scootching the tables aside if I want to use the under-bed drawers that would be blocked . . .