Since Sister came to town to help and encourage me to get things packed up for connecting the room addition to the house, I'm almost reluctant to use a smidgen of time to blog, but things are moving along quickly quickly, so I'll do a quickly quickly here!

Tuesday morning Craig and Tom rolled in to get to work on building the sub floor. Craig started by hosing all the dirt from excavation off the driveway while Tom got tools organized. 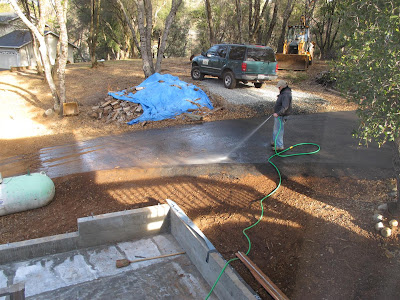 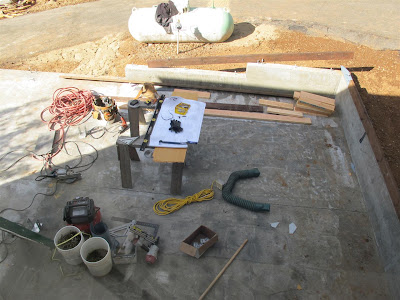 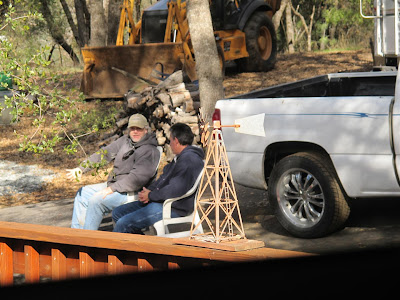 This looks like the framing for the side of the room, but to clarify, this is the front wall for under the floor. My house is on a slope, and the garage is back and to the left of this view, with the kitchen next to it. The garage has a ground level entrance (hmmm -- garages usually do, I guess) and the kitchen is entered off a deck. The land slopes down both in the front and toward this room addition end, so the corner of the new room will be the highest part off the ground of anywhere in the house. The excavator said it was no big deal to level this part where the slab is and it will provide some clean under-house storage. The under-house storage will just clear my head when I'm standing. 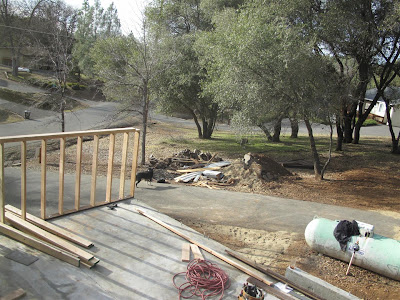 At the end of Tuesday's building: 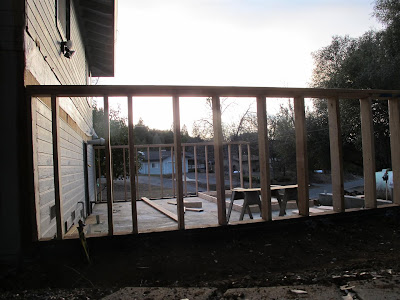 I worked on books and filled a few boxes before Sister came over. I had a list of tasks for her that were necessary but would divert me from packing, which is the place where I'd want to make choices. Soroptimist has a fundraiser coming up, Encore, where we donate unused or gently used items for sale. I had Sister fill out the forms for my donations and take them to the collection point. 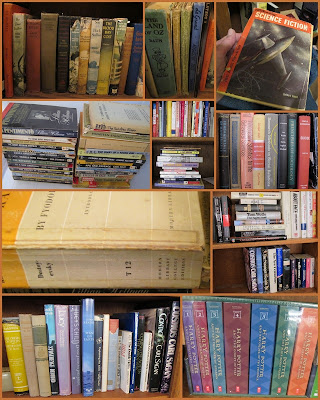 Then she tackled the garage, which was a heap junk and empty boxes scrambled together. She organized it, separating out empty boxes, potentially useful for this packing-up thing, and consolidated "like" things in the other boxes for future sorting by ... me.

Sister also organized my coffee table, which was stacked with unopened mail, newsletters, magazines, catalogs and other miscellaneous pieces of paper, which the cats systematically throw on the floor. She brought these big books, actually storage containers, to put (hide) the stuff. We're hoping the cats won't be able to throw them on the floor. 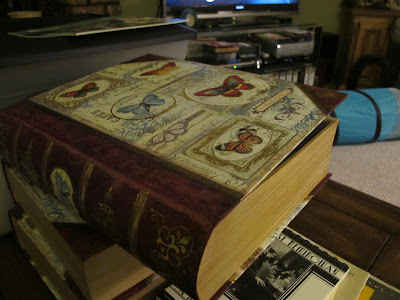 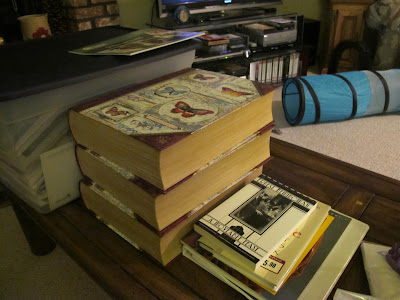 At the end of the day: 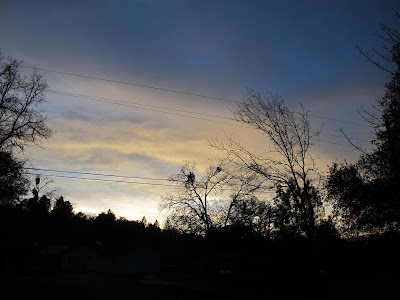 This is a day off for the builders, as Tom has parental obligations for this day of the week and Craig uses it to get all the supplies, subcontractors, and other jobs lined up. I finished off a few boxes of books before sister came over, because this was the day to -- ta dah -- sort out my clothes closet.

While I'm trying to box books, a cat fight breaks out in the book box. 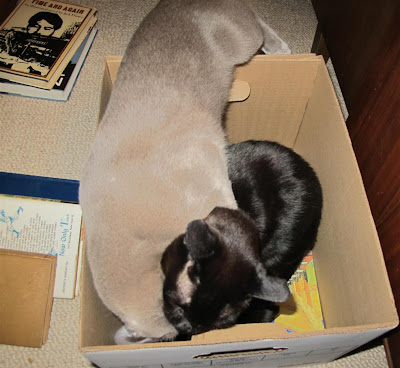 Beautiful calendars over the years: My thought is to collage them someday. 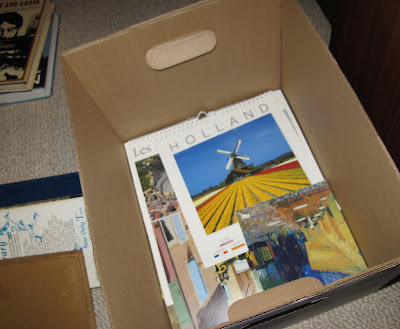 The Wambaughs that didn't end up with the hardcovers; the clean up and organizing books that are to-date unimplemented, along with a couple of new unread books; ancient books from childhood. In other words, a mix of leftovers that didn't fit with their "like" companions . . . 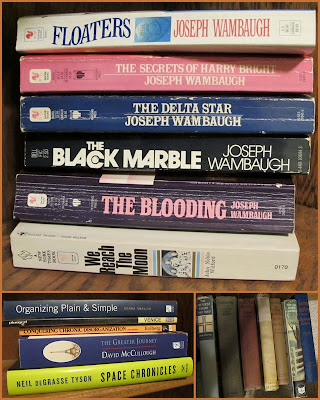 The closet will be turned into the hallway leading to the new addition, so it will have to be emptied. My Gal Friday helped me sort through my closet about five years ago and I put all the empty hangers into my office closet. I never threw the hangers away. I merely refilled them over the years. Yes, I know that rule about getting rid of something whenever you get something new, but my clothing and clothing choices just aren't that organized. Sixty-five hangers have now been returned to the old office closet and Sister has organized my stuff. I took this picture for a Photo A Day with the topic "stripes." 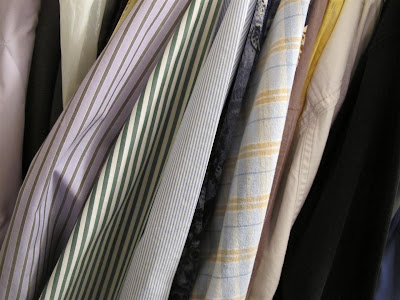 Tom showed up at 8am, but it was raining and Craig diverted them to an inside job at another location.

My day was crammed with appointments and others things. I had a fasting blood test first thing, so went out to breakfast in town immediately thereafter. I was supposed to produce a urine specimen at the lab but nothing happened, so many cups of coffee and water later I remedied that. (TMI?)

Next, Thursdays Out at NeedleCrafts: One of our ladies came in with a bagful of hats to donate to the Cancer Center. I opened mail this week, in lieu of quilting. 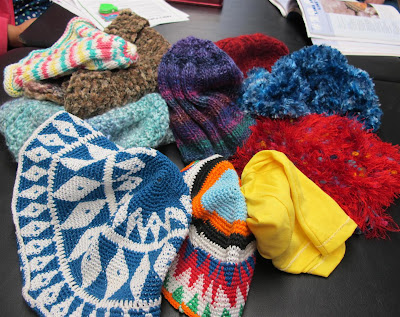 I ran home briefly before heading for another medical appointment in the City Down the Hill. I'd somehow convinced myself that I had the time to take a half hour nap and get over the feeling I was nodding off at the end of NeedleCrafts. I found the power out at home -- again. Such a pain it is to reset the clock on my bedroom television and reactivate the timers on the TV that I use for an alarm clock in the morning . . . The power company made no promises beyond another two hours of no power, so I made a strong cup of coffee and headed out again, into the drizzle and low clouds. 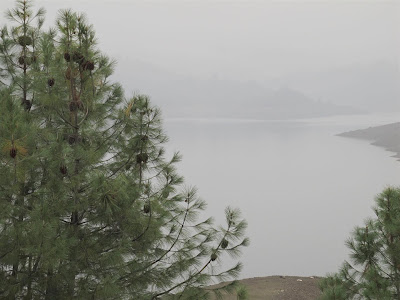 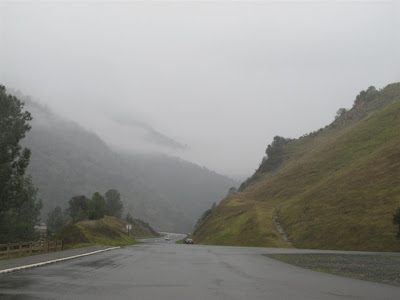 This was the dermatologist. I got a sunburn on part of my nose last September in France and there is still a line across my nose and I didn't think the skin below the line looked like it used to. I forget the exact words he used as he got out his nitrogen gun, something like shooting a few wild(?) cells across my nose. (Ouch!) There were a few errant cells on my cheek that he also banished. I will now have the "oh, you've been to the dermatologist" look. I know that one well. You'll be spared any photos.

When I got back home, the boys had dumped a boxful of my meds onto the floor. :-( 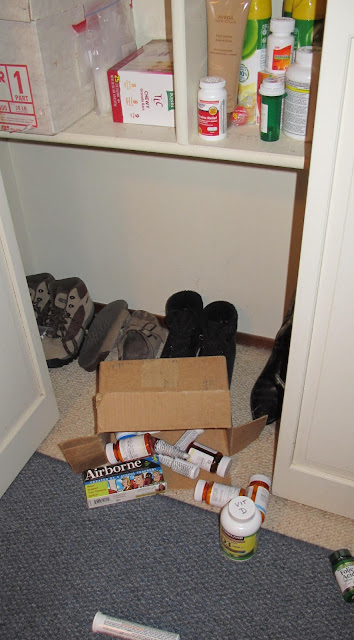 Quickly quickly has not gone as quickly as I would have liked. I must get to work.