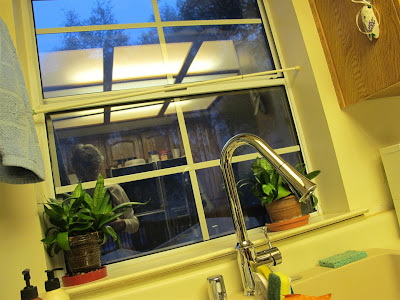 Friday, things were happening fast and furious (no political commentary intended) on the room addition. Craig and Tom hit the slab running at 8 a.m., sawing and pounding. Ever alert to changes in the sounds and rhythms of the construction crew, I heard vehicle doors slamming at 8:30. 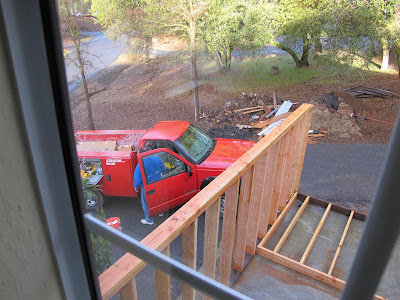 When I'd had a new furnace installed, quite a few years ago, instead of using the original chase up through the roof to vent it, the installer had run pipes out through the side of the house, pipes I had to duck under to walk around in the basement. Don't think of this as "basement" in the way all those HGTV house programs use it: A "finished basement" -- one which has wall coverings of some sort or may even be a man cave or office or bedroom, or not finished, a space where the washer and dryer and odd junk is tossed into a "spooky place."

My basement is just the area under the house where my husband threw up some shelves to store old paint cans and boxes of stuff, but is really just a dirt slope ranging from standing-room to can't-get-there-even-if-slithering-on-belly.

The pipes went right across the standing-up area. Annoying to knock one's head on or carry stuff in a ducking position. And exiting the wall right where the new joists would butt into the house.

The heating guy nicely rerouted the vent pipe across the "short" area of the basement and out a different wall. It used to come across over my right shoulder, with me looking at it from here, straight out this way from where the white pipe connects. 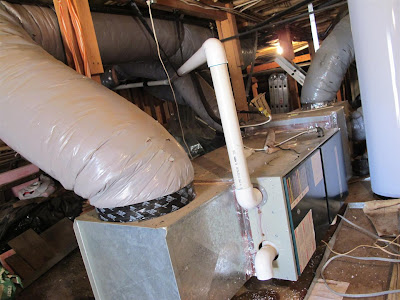 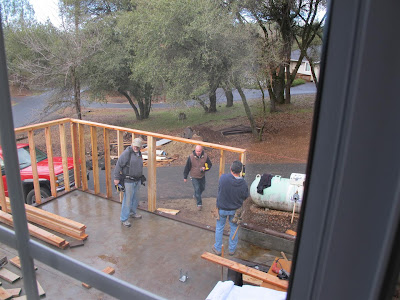 I take a lot of photos through the window next to these frisky critters. They're asleep, not fighting. (Fight photos available at a later date.) 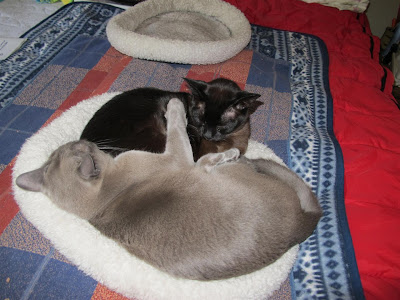 While the men were on their lunch break, I went for an inspection of what had been done so far for the day. And what a gorgeous day it was, with spectacular puffy clouds. 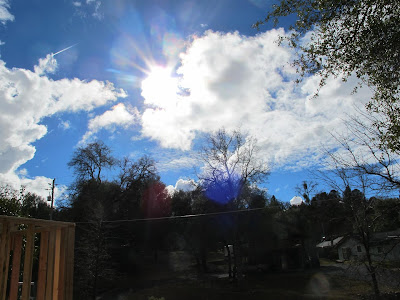 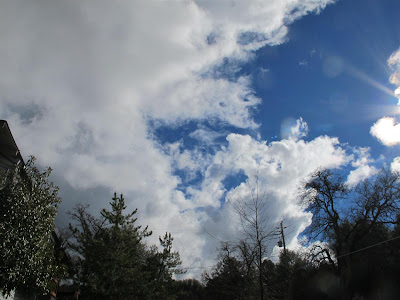 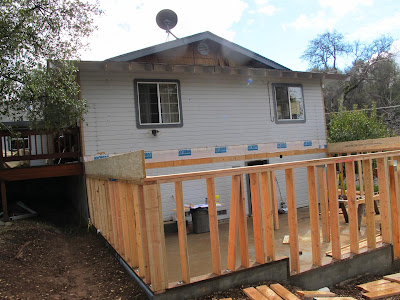 The guys at work, Henley's tail is the black vertical bar, as he wanted to cuddle my camera. All this packing stuff has the kitties clingy and nervous. 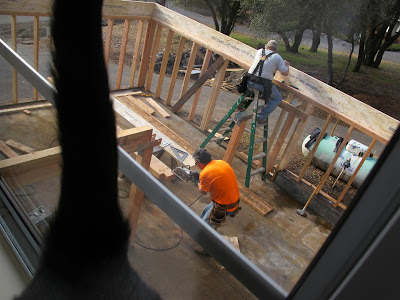 Sometime around 3:30 I looked out that kitchen window that you see in the first photo, around the corner from the construction, and saw billows of smoke streaming from around that side of the house. Four p.m. makes the end of the work day for the guys and it seemed a little late to start a construction burn. Naturally I had to go take a peek. The billows were everywhere, no sign of a fire. Craig and Tom had donned jackets and sweatshirts. Fog. Damp, wet fog. What a change in weather. They were working furiously, I supposed to finish up the joists on one end of the construction. I'm not sure that they did, depending on whether there'll be one or two more next to the house. 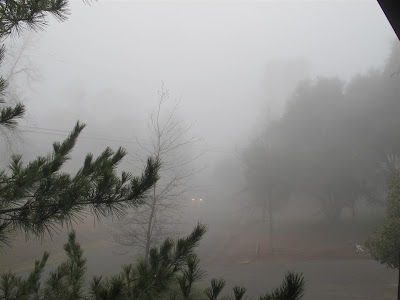 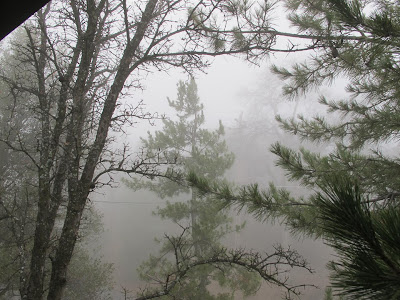 You thought by Panicsville I meant the smoke?  That would not be correct.

More terrifying still, when I returned to my computer, the screen was black. No big deal at first. It goes to sleep like that after a few minutes of idle time, to be awakened by a couple of taps on the space bar or a wiggle of the mouse. Only that didn't work. Tried harder and the black screen remained, Now Panicsville began to set in.

I forced a shutdown, then tried a restart. The bright Microsoft icon came on with "Windows is loading . . . ," spun the little circle for a moment, then returned to black. Uh-oh.

I tried again, to the same effect. Rats!  Brother-in law, to whom I would turn for mysteries like this, was in the Little City down the Hill with Sister for business and shopping.

My Computer Guru? An option of last resort.  I usually get out of these things on my own, but I was at a loss where to start. The computer, a Sony All-In-One, was generating a lot of heat and the fans were roaring, which happens when my photo app is open and poised to access thousands of photos.

I would let it cool down, then try again. This time it got to a screen in safe mode, with a choice between continuing to start Windows normally, or to do something that I hadn't a clue about. The "continuing with Windows" choice was highlighted by default, so it was a non scary choice to make. I also said yes, it could run checkdisk, another highlighted choice.

Checkdisk cranked on and on. I took this picture midway through the process. (I only noticed the reflection when I looked at it full sized. It describes deleting an error with type code 128 in a number of attribute files.) 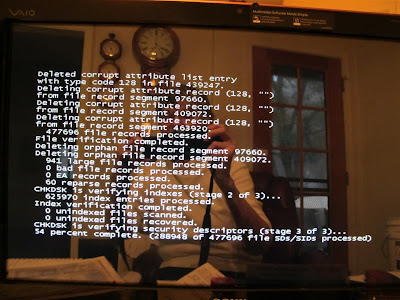 The process appeared to stall at 67%, inducing another mild panic, so I walked away for awhile. I returned as the process was winding up and the results page zipped by at lightning speed and disappeared into a normal boot up.

Somewhere out there knows where I can look for the checkdisk log report. This was the usual "I fixed it but I haven't a clue how."

Enough excitement for one day!