I was expecting to hurry-up-and-wait for concrete to dry as of my last post, that work would commence next week. But the very next morning (Wednesday the 9th), I heard sounds of work outside. Markings were being made, the skip loader was fired up, and dirt was being moved around. 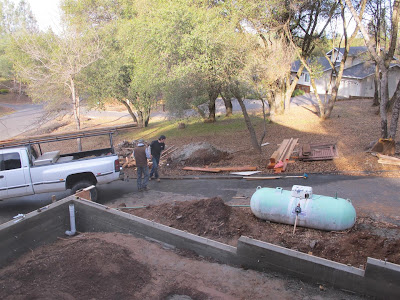 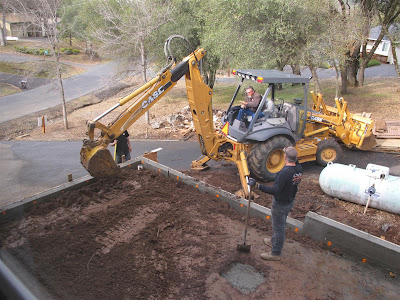 Then they started a cut in the driveway for a new propane line that will be run so the tank can be moved away from the house addition. About that time, Craig popped in to say that problems with the propane company about moving the tank had been resolved. I had hoped that's what it meant, since the issue had been simmering for a month or two. I hope they do a quick changeover when the time comes. It's too cold to go without heat! 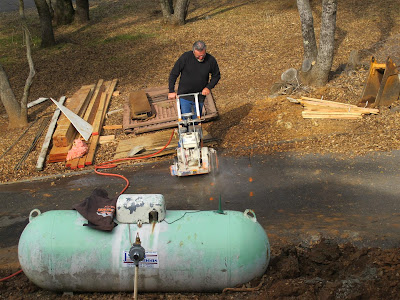 I'm not sure how I missed the delivery of sand, maybe I did something like go for the mail, but the next time I looked, a plastic sheet had been put down and sand was being tamped down on top of it. 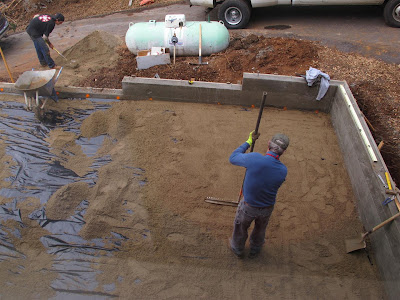 At the same time, I was sorting and boxing books to be taken to Garage Mahal for storage. 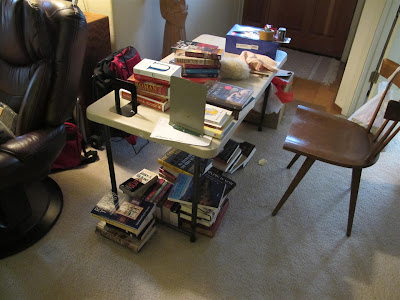 They laid down a grid of rebar for the slab. I think I've mentioned that I opted for an actual slab under the house, rather than the thinner, rougher rat-proofing. 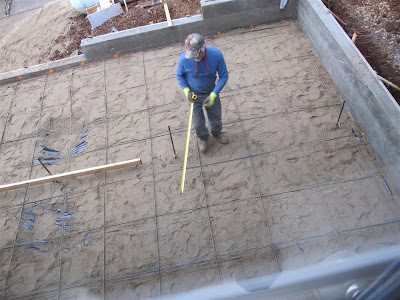 I'd love to make a written inventory of which books are in each box but I'm already slow enough, so I'm taking photos. They're more or less accurate on which books are together, if only I manage to connect up the photo with the box number. 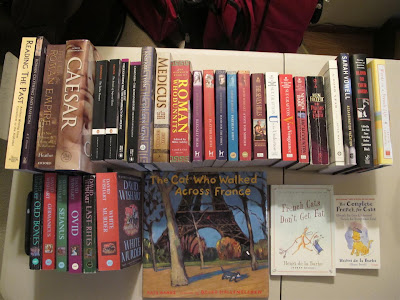 Here's the entire piece of equipment that's been moving the earth around, whatever it's really called. It's the Case 580 Super M, in the event that any of you are equipment aficionados. 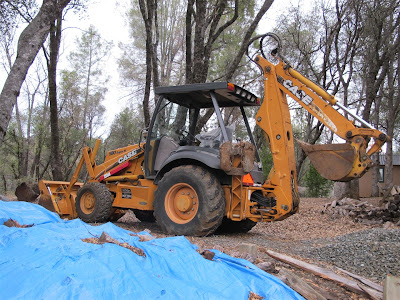 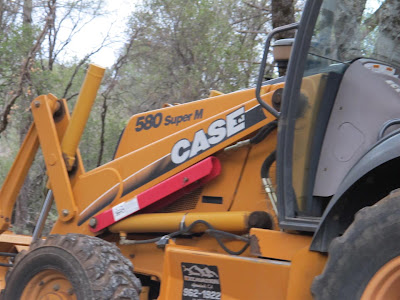 The plan is to have the slab poured on Thursday.

I ponder whether to pack the books on organizing, considering that organizing is what I'm trying to do. They've been buried among all the other books. 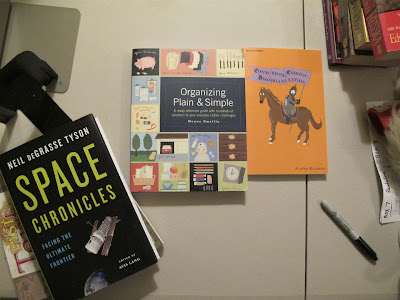 I hear the drains tinking in the night from rainfall and awaken to find a dusting of snow here and there. 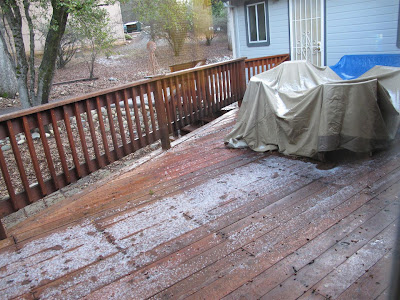 Still, a worker appears and I call out the window to ask whether the pour is on. He says it is. The sand is soggy and the day is gray for the moment. 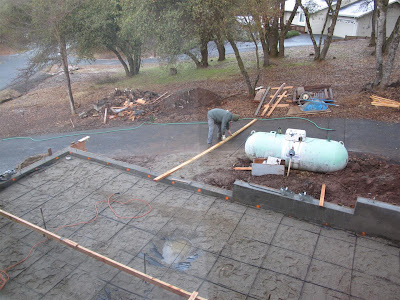 I kept looking out the window. More and more guys arrived and the equipment that I eventually figured out was what pumps the cement from the truck into the site also arrived. Hurry up and wait. I couldn't stay for the excitement. It was Thursdays Out, time to go to NeedleCrafts, so I left it all behind. I did spot a cement truck going in the general direction of my house.

Someone (Sandy) had been busy creating hats and hats and hats. Fancy hats. I threw a picture of Terri in here with her new necklace, glasses and coordinated outfit. 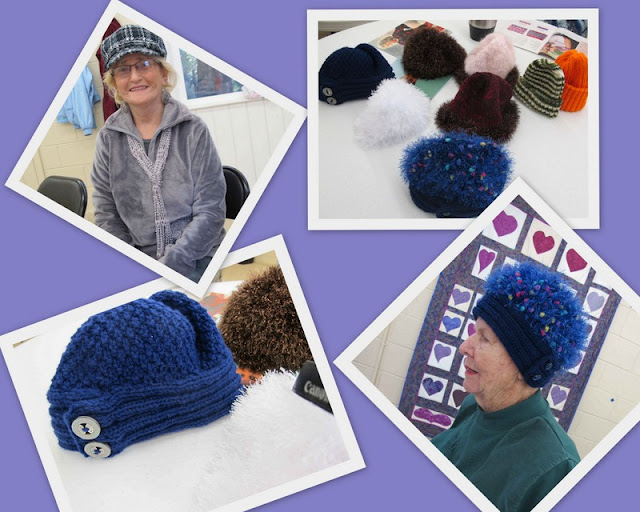 I couldn't resist this one as two ladies modeled these hats. I don't know who knitted them, but they will go into Sandy's washing machine which will shrink them into felted hats. I thought the ladies looked rather like they'd been taken hostage and were about to be paraded before the cameras. (Click!) Maybe we can get an "after" photo next week. 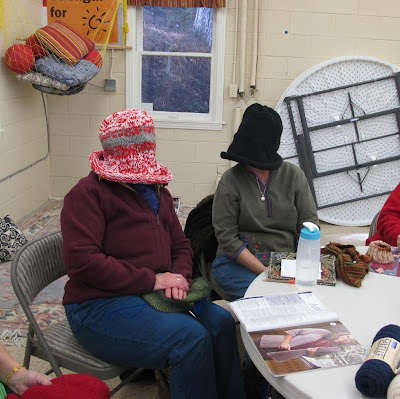 I had an afternoon appointment with the ophthalmologist -- I had some concerns beyond what my optometrist had dealt with in a recent exam -- so I couldn't go home yet to see the results of The Big Pour. As we left the sewing room, weird snow was falling. It almost looked like hail, but it wasn't. 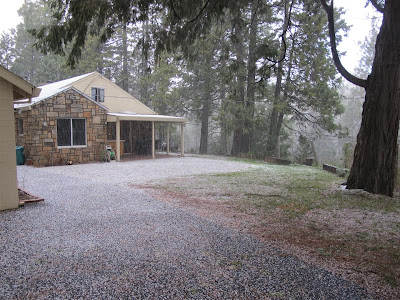 Here's how to really piss me off: shut down the shortcut from our mountain and send me down the long, sinuous, nausea-inducing "new" grade; and then open it up when I'm partway down the hill. Yes. And there I was in a bit of a hurry to get to the doctor on time!

Once down the hill, the snow had stopped and beautiful skies surrounded me. I had to stop for a picture from every angle. 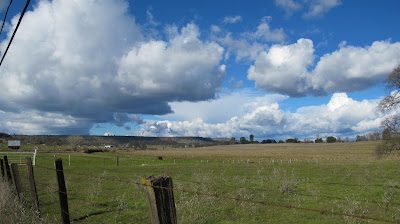 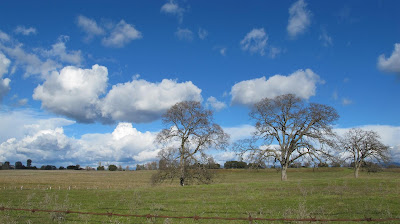 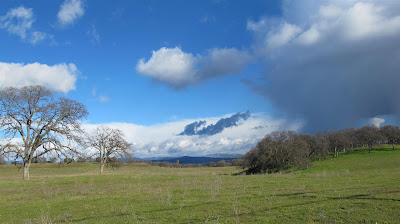 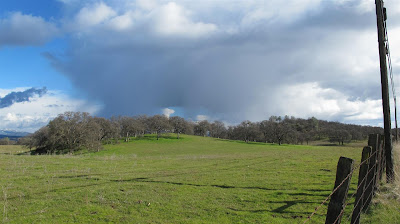 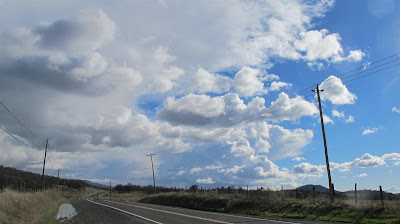 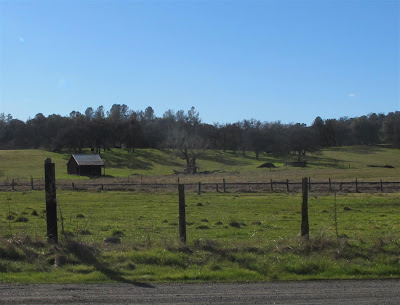 I spent a long time at the ophthalmologist's office. The shortcut was closed again on the way home. There had been accidents all over the county during the scattered patches of falling snow, so I wasn't particularly surprised, just a little grumpy about it. It was dark on the way home, so dark when I arrived there that I couldn't even see the results of the big pour. I held up my camera and aimed it randomly so I'd have some notion, but all I could really see was a blue tarp. 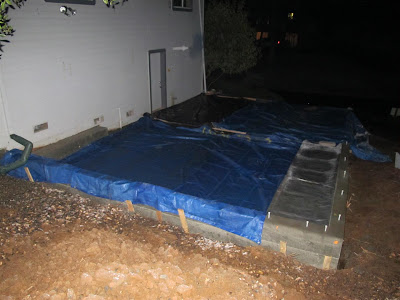 Before describing the day, this was the 13th anniversary of my husband's death. Next Monday, he would have been 77. I miss you, Sweetie. 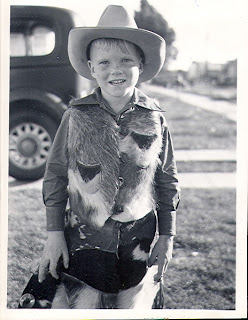 It was a cold day, 28° when I got up, and it had been down to 23° at some point overnight. I took the iced up cups of water from the feral kitties and put out tepid water for them, but even it began to form ice crystals before long. 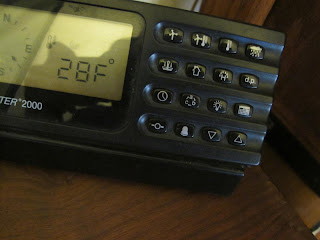 Ice that had melted on the box on the truck froze as it dripped down its side. 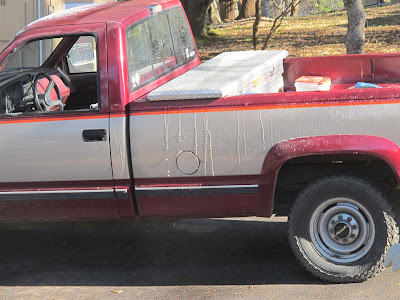 My big job for the day (well, one of them) was to unload the four boxes of books from my car into the Garage Mahal. Icy day. I almost fell on my keister walking in front of my car. That wetness is pure  black ice! 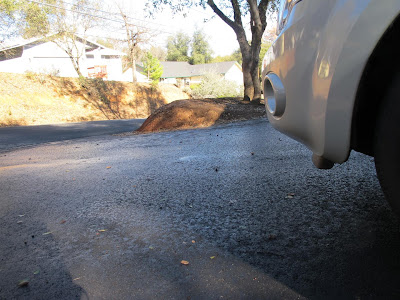 The collection of things now in Garage Mahal looks puny, but I have taken quite a few boxes to my rental storage unit and there are some sewing things in a separate room in Garage Mahal. 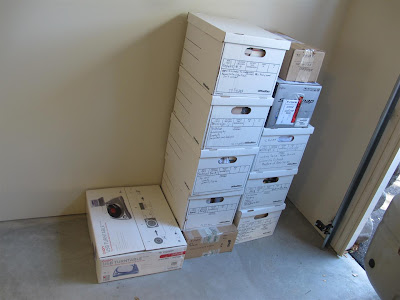 Not much happened on the construction scene. A couple of guys showed up for awhile and it looked like they were going to put grooves in the slab, but their little saw thing stopped working and the slab was covered over again.

Still, this has been a pretty busy week for "hurry-up-and-wait."

Just to prove I sometimes cook up a little dinner, here's one of my favorite quick ones, the corn and salsa omelet. 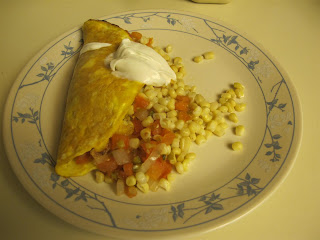 Oh, and the starburst sunlight at the top of this blog? That's what headlights at night recently started looking like to me, only even spikier. I couldn't find a similar photo of actual headlights. It's why I didn't go right out and have my new glasses prescription filled. The diagnosis by the ophthalmologist?  Cataracts.

I'm scheduled for cataract surgery on the left eye late next month.