How About Them Niners !!!


I've been a semi-indifferent sports fan for the past several years. Before my husband died (13 years now), I was perhaps a bigger football fan than he was. Now that I think of it, he had lived his entire life in San Diego, so was of course a Chargers fan in the football realm, and a Padres fan in baseball.

As a kid I'd been a Los Angeles Rams fan and a Los Angeles Angels (Pacific Coast League) fan. I went off to college in Ohio in 1955 and rooted for my teams, such as I could in those days before pervasive TV and sports coverage, until the Angels had the poor form to be bought out by the Brooklyn Dodgers. I always resented them for displacing my Angels, so never was a fan. By the time the Rams folded (er, moved somewhere else), we were already retired up here, but I had, during my years of living and working in San Diego, also became a Chargers fan, except when they played my Rams.

After moving to Northern California, I took up with the San Francisco Giants and 49ers (except when the Niners played the Chargers). I think my husband never really made the shift in loyalties when we moved and became disinterested with so little coverage of our old teams. My son remains intensely loyal to the Chargers and the Padres, even though he no longer lives there either.

I've paid casual attention in recent years, but now that my Quilt Camp Buddy has led the cheerleading and provides me handy things like the times and channels of the Niners games during this more and more exciting season, I'm now on board.

Harder to do when packing boxes. There's a small TV in the room where I'm packing now, and it's not really in view unless I lean far backward to catch a glimpse. I took this exciting photo of some items packed. I used to save the Band-Aid cans to keep buttons, hooks and snaps, and noticed the prices on the lids of these two. I've noted the quantities in each. Wow! I was, and am, usually disappointed by the number of "dots" that seem to get included in the assortment. They feel like "filler."

Today it was little things, an assortment of things to be packed, which requires many more notations in my inventory than my books do, so I basically listen to the game. Except for that last minute and forty-five seconds, when I stopped packing and went into the living room for the big TV. Wow. Just, wow! In case you weren't paying close attention, the Niners played Atlanta in Atlanta for the (mumble) championship (division? conference? I haven't been keeping up with the nomenclature.) Atlanta got off to a quick 17 to 0 (or maybe they didn't get 17 before the Niners got 7) and were ahead 24-14 at the half. Anyway, Atlanta fans were already posting their nya-nyas on Facebook. There were changes of lead and shocking changes of possession in that last few minutes, but the Niners came out on top, 28-24. Very exciting, unless you're an Atlanta fan. Whew!

The Forty-niners are going to the Super Bowl.

At the end of the afternoon, I had to get ready to go the RV club's pizza party. En route, I took the stuff I'd packed for storage at Garage Mahal to drop off on the way.

Most of this is for Garage Mahal. 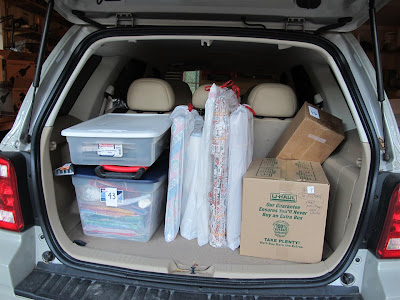 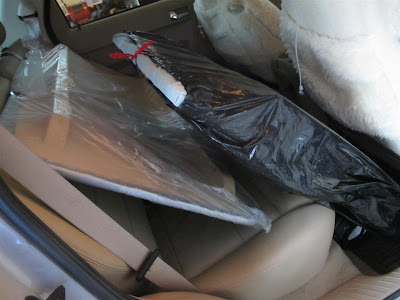 Added to the stash. 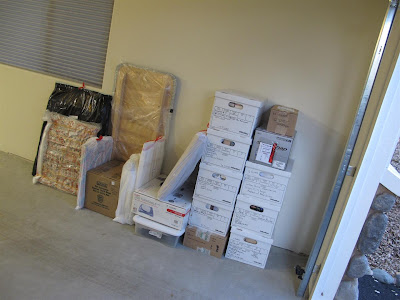 And off I went to the party. 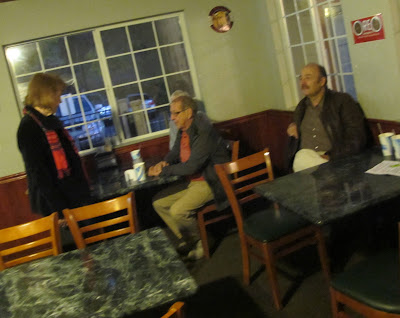 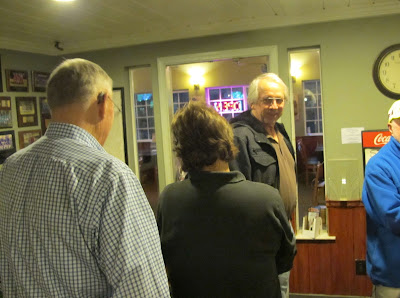 The eating is over, the business meeting is over, the Baltimore-New England game is over. You can count on sports events at the pizza parlor. You can often count on CNN or FN, but with the big playoffs, all TVs were on the game. My tablemates were rooting for New England. I don't know whether that was the group's consensus or not. It didn't make much difference to me. 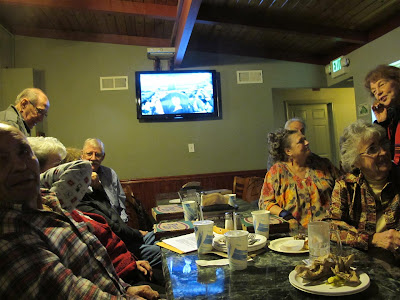 For the record, I've never been a fair-weather type of sports fan, but it really is exciting when my team is on a roll.