Groundbreaking and All That Stuff


I guess I'd better make this fast. I should be straightening up for tomorrow when My Gal Friday (truly, that's what she calls herself) comes to clean. Even on Thursday. I have managed to strew things all over the place in the course of sorting out and packing stuff in preparation for vacating my bedroom and old office in a month or so for the construction project. I am not good and sorting and packing up stuff. Hence, I procrastinate.

The project -- for those of you new to this, a room addition which will be divided into quilting studio and office/study/computer room -- was scheduled to start on Christmas Eve day. It rained. It also rained the day after Christmas. The next day, Craig, my builder, appeared outside and demolished the rickety screening fence around my propane tank. The tank will be moved, since it's closer to the house than allowed, by far. The screen was done in by a falling tree in the big snow storm of a couple of years ago. Note that a lot of my photos of the project are taken through my bedroom window, which sometimes gives weird reflections. 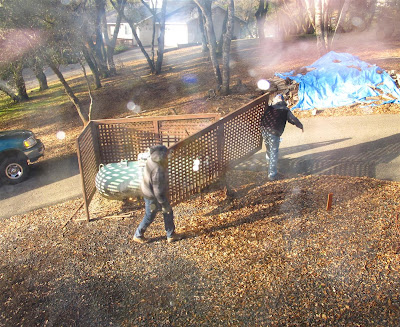 It looks kinda lonely.  You may, if you enlarge this picture, see the orange string marking the perimeter of the room addition. 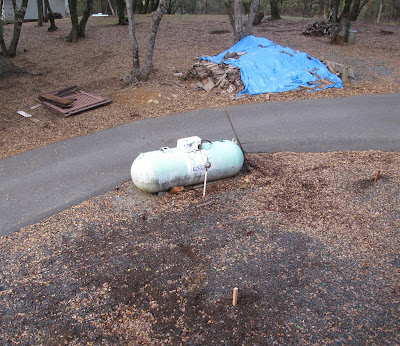 I mentioned the arrival of the porta potty in Friday's blog. I was saving all construction project photos for today. This is the most revealing picture I took. 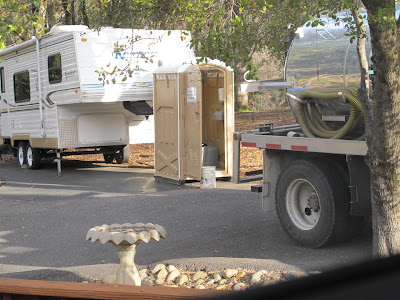 I was awakened on New Year's Eve morning by the rumble of a truck engine outside my bedroom window. Wow. I jumped up and peeked between the curtains. There was another truck in the driveway as well. Two men stood, bundled against the cold, looking over the work site. Then they left.

Things picked up again about noon, and this piece of machinery (if you know its official name, please leave a comment or email me) excavator backhoe (thank you, MOG 92) broke ground at a bit after 1:00 pm. 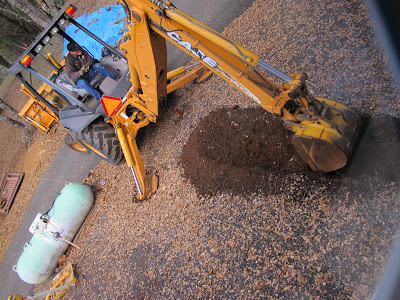 In a little over an hour, the general form of the spot had been scraped out. 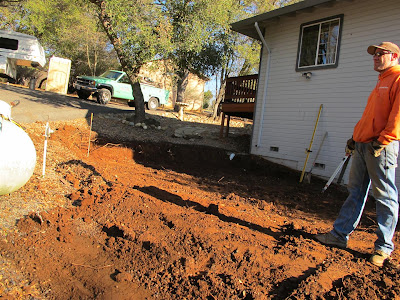 Somehow we got on the topic of propane odors. (In every sentence, the propane company points out that propane is odorless, so a nasty smell is added to alert us humans about any leaks. But you knew that, right?) A couple of the guys had smelled a waft of propane at various times of the day. I asked them whether it was inside the basement under the house? I knew about that smell. It had been going on for years.

They, the guys, all alerted on me like bird dogs. "You what???" Exploding house stories were rolled out. I was ordered to call the propane company right now. They all looked poised to flee. I'd never known quite whom to call and I hate making phone calls, but I went in and did it. They told me to turn off the propane tank and that someone would be out within two hours.

After delegating propane-turning-off duties to Craig, I headed out to do errands, among them, taking 15 small boxes of fat quarters to my storage shed. Most of the boxes had been stashed on the floor of my closet, and some were from the drawers under my "Organizer Bed." 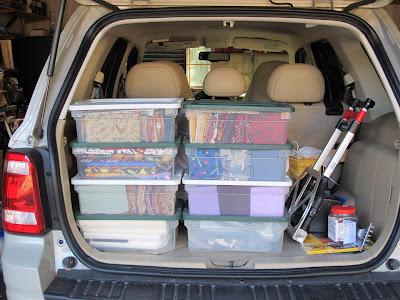 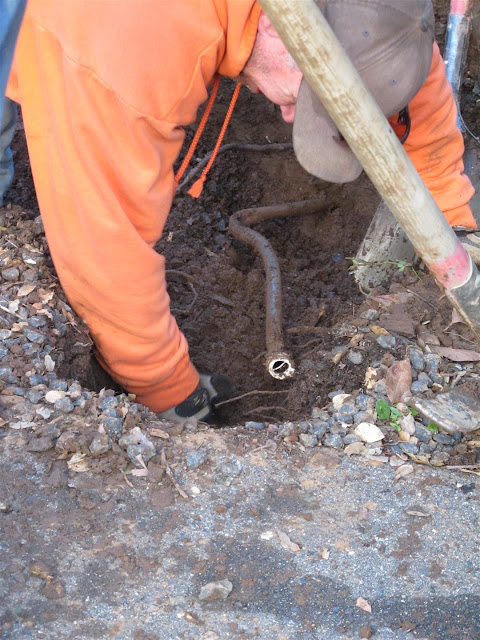 In case it's not really apparent, this is the end of a water line . . . my main water line. It shouldn't have an open end like that. There was also a lot of mud and water around, although no longer running free.

The plumber arrives and joins the peanut gallery. 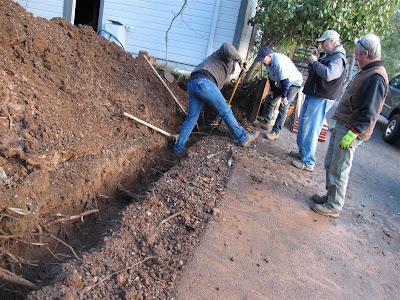 The propane guy arrived. I told him what I routinely smelled and where. The workmen told their stories. PG inspected the line through the basement and disconnected it where it extended to the big generator in the basement. And red tagged it. Meaning I couldn't use it. Not that I did. Several years ago, after my husband died, it was running during a power outage on a cold winter day. It came on and went off automatically during a power failure and restoration.

Fortunately I recognized the symptoms of carbon monoxide poisoning in myself before it did me in.  I went out and bought a couple of CO meters. I let the generator exercise a couple of times after the poisoning incident. It only exercised for 10 or 15 minutes once a week, but even that set the alarms off.

I abandoned usage. I decided the problem was that the exhaust discharged under my deck, which had at least five vents into the basement right next to the exhaust pipe. Any breeze outside toward the vents would direct exhaust under the house and into the inside of the house via the furnace. Swell. I always intended to find someone who knew how to build a better vent pipe.

It seems it's now illegal to have it in the basement. Craig has funds for some work on getting it operating in my contract, but it will now involve a relocation outdoors. 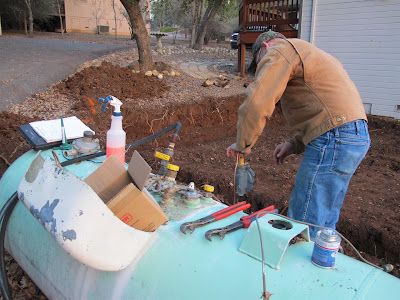 The plumber stayed late and got the pipe repaired. He'd been slammed throughout the holidays and hadn't been home for dinner for days. Thank you, bud, for taking good care of me.

This little scoop looks so big in closeup. 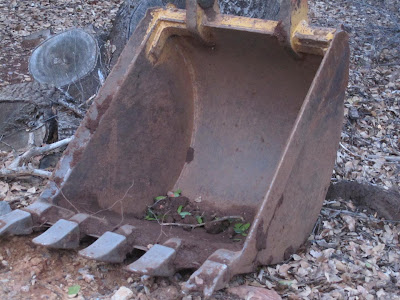 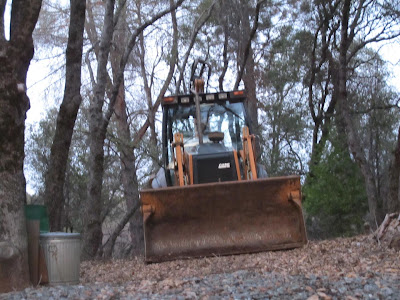 
I heard the thrum thrum of the truck engine early that day. Guys were working while I was watching the Rose Parade. 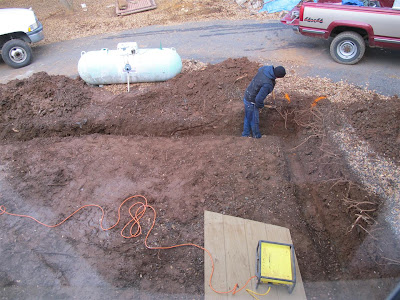 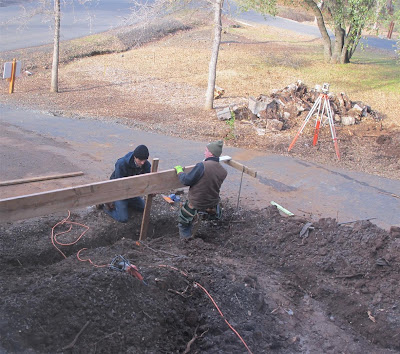 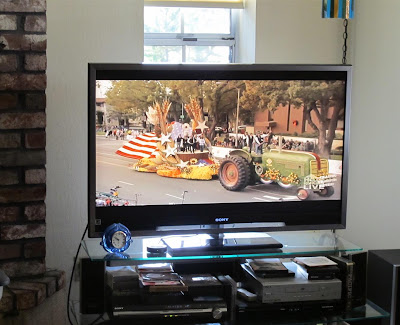 One of the ferals is undaunted and watches them, too. 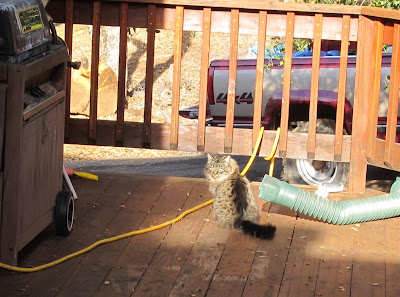 At the end of New Year's day they had the outside of the foundation forms well in hand. 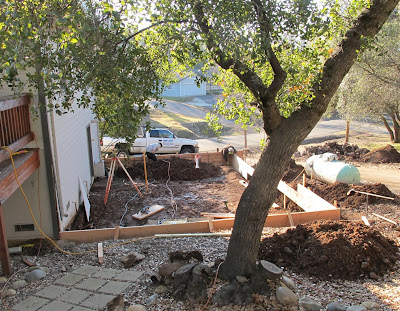 This morning there were huge ice crystals on the feral cats' water. 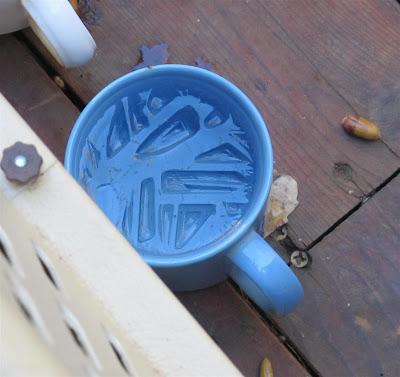 More lumber is delivered. It's a delivery woman. 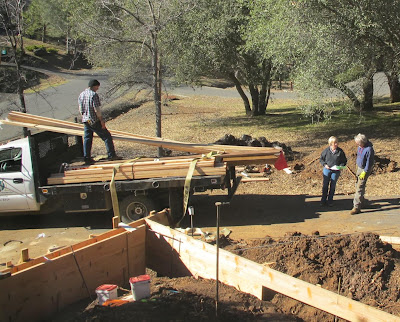 They're marking where the door will be. 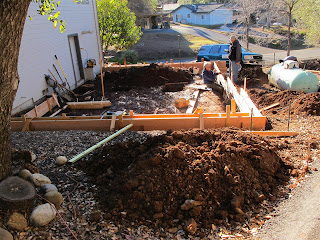 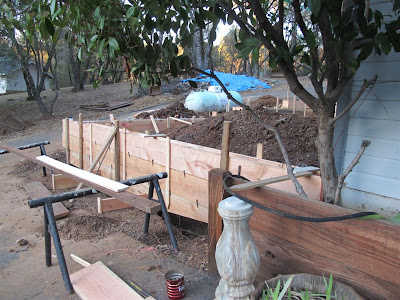 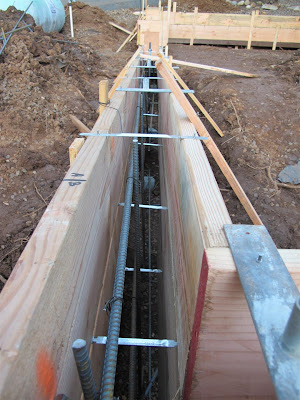 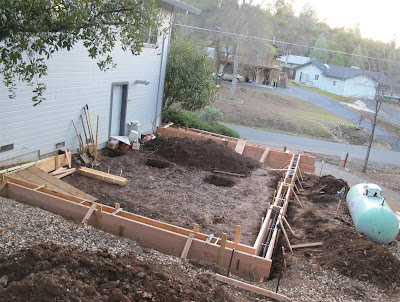 I gave official official official word to Craig that I would go for a slab for the basement floor, rather than just "rat proofing." My current under-house basement area is just dirt, sloped, and it drives the termite guys crazy when I pile things on tarps on the dirt. (Craig was allowing time after my first "yes" for any buyer's remorse. Yes, I said, with visions of giving up the storage shed the moment this was done.)