I figure if I get it together for a short report at the end of each day, I might avoid long nights at the computer and long blogs on the reader's end.

There was a little excitement going on around here today. (Be still, my beating heart . . .) Lumber! Foundations and slabs are a good start, at least I hope it is if the slab is ever revealed. But the delivery of lumber makes it feel like the real thing.

I got home from the movie after dark Thursday and couldn't see what, if anything, had been done on the new addition. Just 88:88 on the microwave, indicating that the power had gone out again while I was out. No word on the pending re-inspection on the propane piping. I couldn't see any changes when I got up this morning either (except yet another 88:88). But around 10:30 I heard truck noises and went running from window to window until I saw this. Lumber! 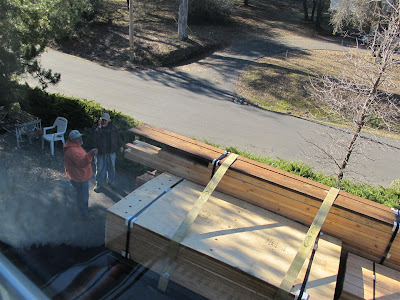 And shortly, lumber being unloaded . . . 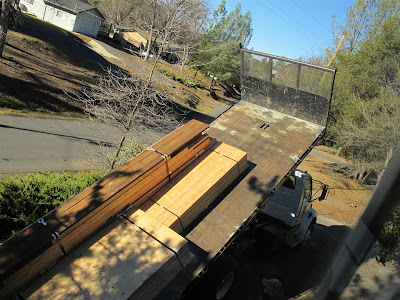 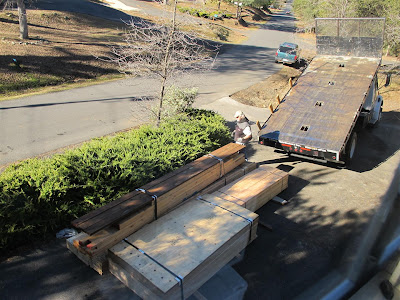 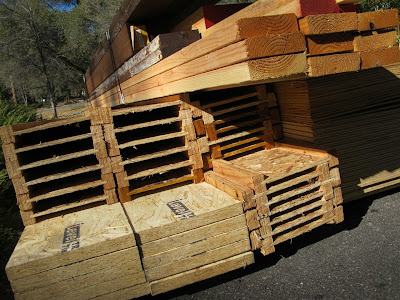 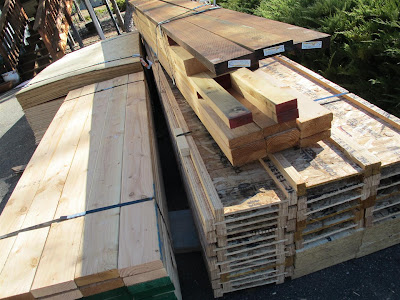 But I had things to do myself today to advance the packing. Project #1 was to get all the paintings and photos off the walls of the old study, the bedroom, and even a couple of prints in the bathroom. Fourteen turned out to be small enough to pack in a box, and 14 had to be bundled in packages of two or three. I killed two birds with one stone with the big paintings: my linen closet must also be emptied, to be relocated, and I wrapped and padded the paintings with some of the sheets and pillow cases.

This was the first and largest package. 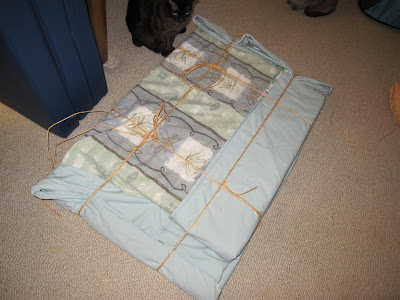 Here are groupings sorted by size that can be wrapped together to protect glass or canvas. 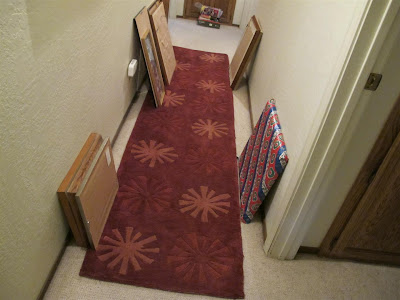 Wrapped and ready to be transferred to Garage Mahal. 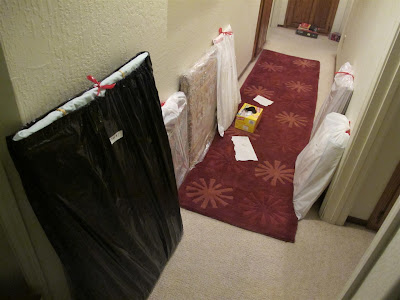 I'd hoped to pack up another box of quilting stuff to go to the storage shed, as I have a couple of boxes ready and waiting to go there, but hefting around those packages of paintings was more tiring than I'd anticipated and my back hurts. Okay, that's an excuse and last night I said NO EXCUSES! But there it is.

Oh, I almost about forgot spotting this early in the afternoon, a new green tag on the permit pole. I took a look at it and it's from the building inspector. Nothing says "passed" but I'm hoping green means go. 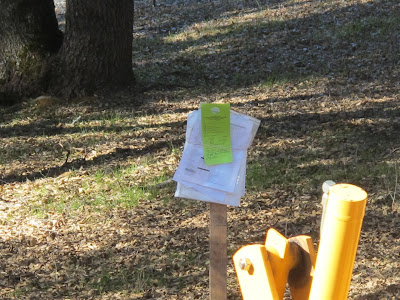