Seed snow and even a few sprinkles danced around the Valley Sunday afternoon and evening, but sun hit the tips of the north rim and gradually slid down into the Valley on Monday morning. It didn’t warm up much, however. Mist from Yosemite Falls froze on the cliff face, making it look like a big white Christmas tree, with a puddle of ice at the base. 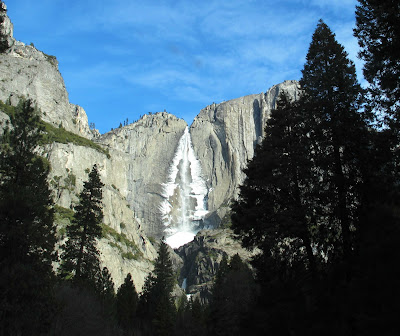 The first culinary demonstration at the new session of Chefs' Holidays at the Ahwahnee Hotel was due to start at ten on Monday morning. We were afraid of missing the connecting bus from Yosemite Lodge where we were staying to the Ahwahnee, so we took the car instead.

People lined up at both entrances to the Great Room. Sister, Sister-in-Law and Sister’s Friend who was “L” yesterday, but I’m changing it to El today. They were excited at the prospect of the demos. I, on the other hand, who have lost all interest in cooking and who will happily fill my tummy with granola bars and PB&Js, find the thought of watching a food demo sleep-inducing. I sat in the lobby to the Great Room, in front of a toasty fire, reading for a while and eventually snoozing. 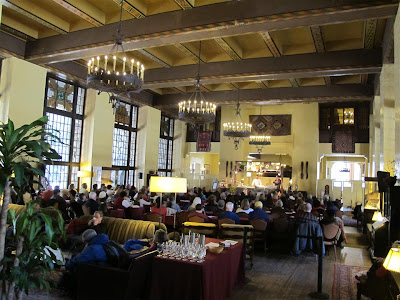 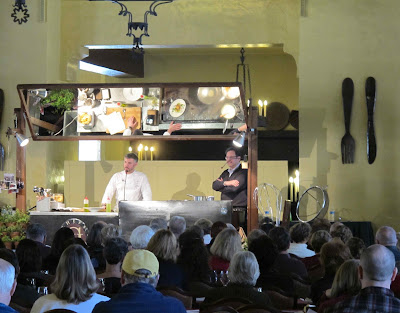 I have a list of the cooks scheduled, but some appearances apparently had to be switched to different times, so won’t mention names here, since I wasn’t in the room.

Toasty fire, with decorative art above the mantel: 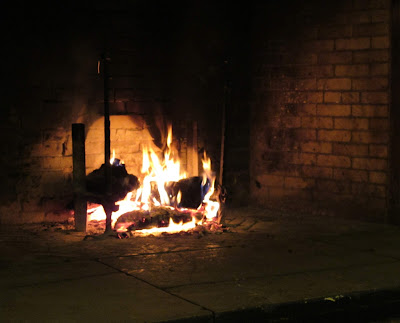 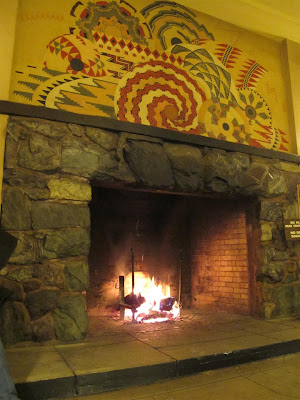 We bused on over to Yosemite Village for lunch and some shopping, then back to the Ahwahnee for an afternoon demo (and nap). No, actually, I started looking through my photos to choose which to use for the blog.

We had reservations for dinner in the Ahwahnee Dining Room this evening, so we took the bus back to the Lodge to change for dinner, and en route learned the secrets of making the connection to the Ahwahnee with only two buses running on the hour-long circuit, thus avoiding having to allow an hour to get back for dinner. Or subsequent culinary demos.

At last, pine needles, snow, ice and mud are being scraped off the walkways, another use for a Bobcat. (Can’t resist machinery being operated, as you know.) 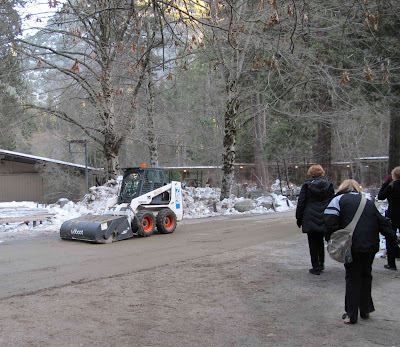 When we got back to the Dining Room, we were informed that the Queen’s Table was being prepared for us. It’s so-named because Queen Elizabeth once dined at that table. It’s in an alcove with a spectacular view – in the daytime – of Yosemite Falls and the cliffs. As evening falls, we can see remnants of blue sky above the cliffs, and reflections of all the chandeliers in the room, including our own. (El’s back, Sister opposite her, SIL on the left. The couple beyond us was celebrating their 41st Anniversary. 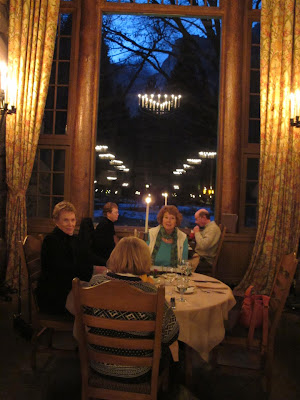 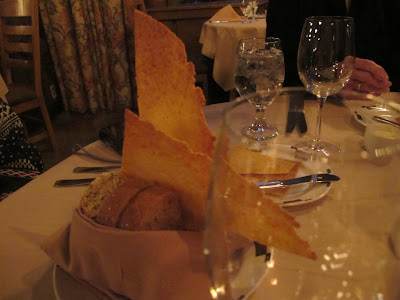 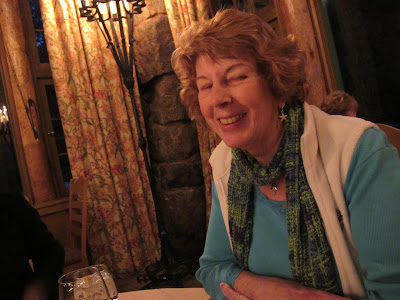 We had two prime rib dinners split among us. Here’s my half serving of prime rib, broccoli and mushrooms, mashed potatoes and Yorkshire pudding. 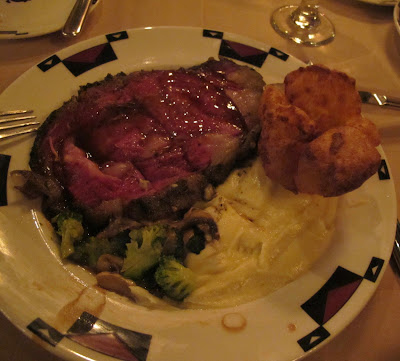 Then there was the “Three Petite Brulees,” distributed among three of us. I got the Tahitian Vanilla Crème Brulee. It was really very tiny, but plenty of sweetness for me. 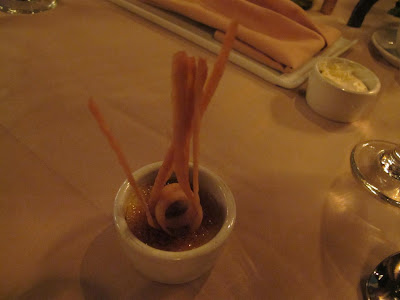 We took the car back to the Lodge, with four overstuffed ladies who will not fit their jeans the next day. And El was thrilled with her experience.