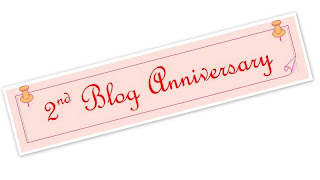 Yesterday was the second anniversary of Traveling Sardine Class. This will be my 343rd blog published since this began on January 7, 2011. I knew this anniversary was coming and pondered pondering weighty topics. After all, I had a reminder that popped up on my screen daily for the past few weeks. 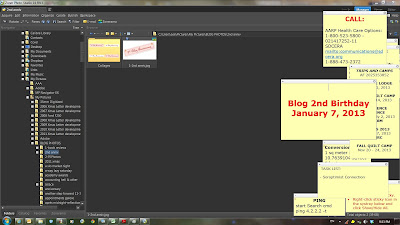 Now for the excuse. I overate night before last and took a whole anti-nausea pill (as opposed to a less potent half pill) before bed to calm the rumblings. I took another one in the morning, and although I helped out at a computer class that morning, for most of the day and evening I kept nodding off. Whenever I sat down. It took awhile before I made the connection between the pills and the leaden drowsiness. I couldn't have stayed awake to write last evening to save my life.

Before I left for the Monday computer class, Craig, my contractor, showed up, as did the foundation guy, to wait for the building inspector who had given a two hour window for his arrival to inspect the forms for the foundation. When I got home, Craig had left a phone message about the results of the inspection, but he has a cell phone and I have difficulty understanding people on cell phones, so I am left to guess.

I first noticed workmen outside at 7:15 this morning when I got up to feed the cats and get ready for a doctor's appointment.  I guess we passed inspection. (Time out for a little yippee!) I couldn't find my camera and raced around the house looking for it before reverting to my old one.


I wish I'd learn to keep the camera in just one place. Eventually I spotted it (oh there it is), when I wasn't really looking. It wasn't hidden but I don't know where I found it, any more than I remember where I put it in the first place. I did have it, though, by the time The Big Guy arrived.


In a matter of minutes, the forms were filled.


Then they're all smoothed up. It took about half an hour for the whole process!


I had to leave for the doctor so missed anything more for the morning. For you Seniors out there, there's a new Medicare thing familiarly called an AWV, or, Annual Wellness Visit, which, I thought, turned out to be quite a useful thing. It included gathering and assessing of certain information by computer, an interview by an assistant (didn't interview the interviewer except on the question of how they handle the computer part of it for people who aren't familiar with computers), and then the doctor comes in to discuss the results of the report the computer and the interviewer have generated. I don't have any problem talking with my doctor, but this report brought up and gave me an opportunity to discuss issues which are too complex or fall outside the issue(s) of a regular exam.

Then there was a Soroptimist meeting, running through lunch and a while after. Sister came over later in the afternoon to assist with the packing up for the, uh, relocation out of my bedroom and old office. Suddenly, since the project is right on schedule, it seems like I have only two weeks to do it, since we're taking a little jaunt to Yosemite later in the month. She rearranged a closet that has been half china storage and half linens, putting my set of china in the protective containers she'd given me for Christmas. It looks so nice. I finished packing another box of books and she took the pile I'd accumulated to put in her Garage Mahal.

We went out for final photos of today's work on the addition. Some of the forms were already off. 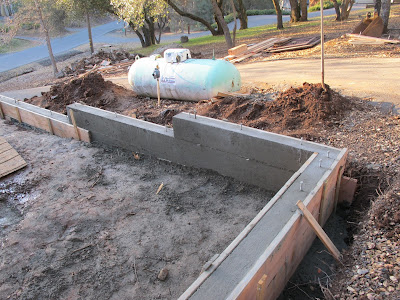 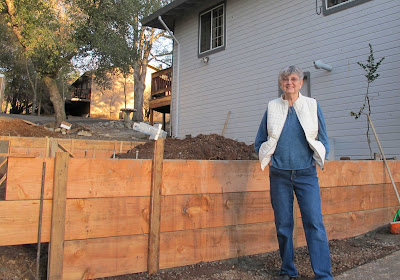 Tiny kitten heads down to check it all out. 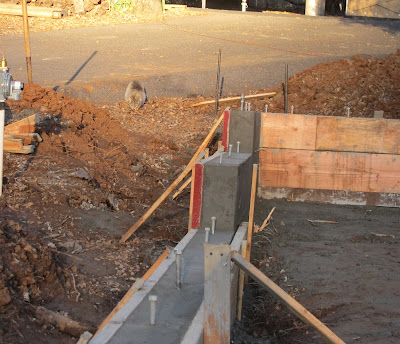 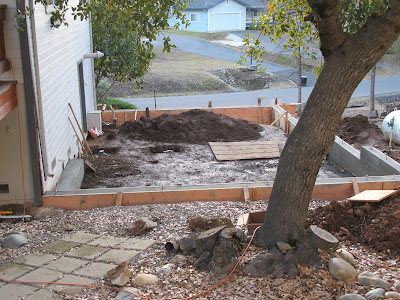 I've been told that we now have a hurry-up-and-wait period while the concrete properly cures. The next thing I see on the calendar is back fill and delivery of materials for the slab next week.