YOU May Be Somewhere Among These Quirky Blogger Stats


Every now and then I take a peek at the Stats Blogger (Google's blog host) keeps on traffic to each blogger's site, to get a notion of whether anyone at all is taking a look at this blog. I was idly scanning down the categories a couple of days ago when, at the bottom of the page in Search Keywords -- Search Keywords for my blog -- my eyes fell on this:


plants make penis big and how to use it

That was certainly enough to make me sit up and take notice. I could not recall ever using the penis term, and surely not within the context of "how to use it." I did an internal blog search, and there it was, over halfway down the page in a benignly titled Running Faster and Falling Behinder, this photo with my embarrassed admission that I think of it as the penis plant.

Somebody looking for various enhancements must surely be disappointed to land on my blog. I've tried to show you this search term in this screenshot so you could see with your own eyes but it's not there any more.  (Isn't it lucky that I jotted it down on a notepad in case I couldn't find it again.)

It wasn't this "day" (for the dailys)  that I actually saw it, so I speculate it had only been tried once or twice, and in an ever changing list, it had dropped out the bottom of longer time periods by the time I took a screen shot early this afternoon. I've looked at seven pages of Google results to see whether my blog shows up, with no luck. Wonder if the little fella actually read down to his (non)answer. Now that I've Googled the phrase myself, I guess it'll show up again. 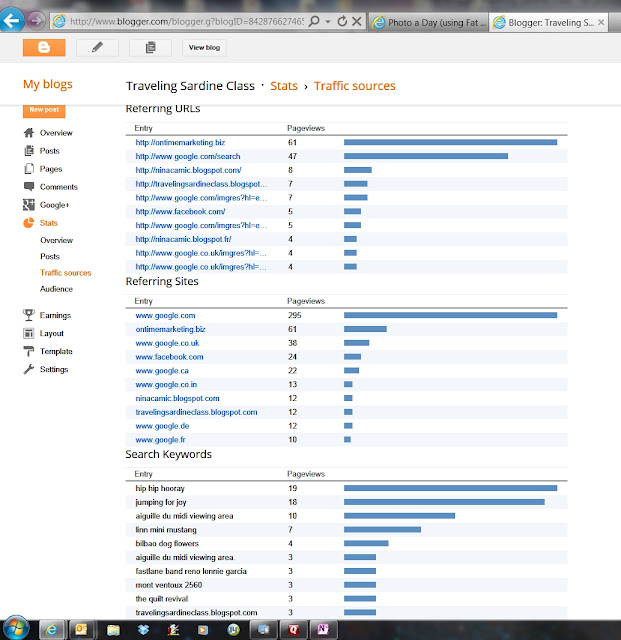 This shows up over and over as a Search Keyword, day after day, week after week. I used this cute little photo in a same-named blog when I finally heard from Air France, after a weekend of suspense, that my credit card purchase of an airline ticket had finally gone through.

Doing a Google search of the phrase myself, I don't find my blog listed, but the cute little photo is in a row of images for hip hip hooray and if you click on it, it's superimposed over my blog. This may be the clue to a pattern, as the same explanation applies to 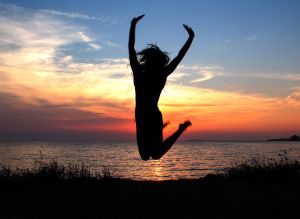 Actually, this is where I first figured out the photo/blog connection, because when I Googled the phrase, Images were the second entry, the whole top row was my own photos "you" and the bottom row was commercial photos I'd gotten online. My photos. On Google. This whole adventure still leaves me grinning from ear to ear whenever I think of it. 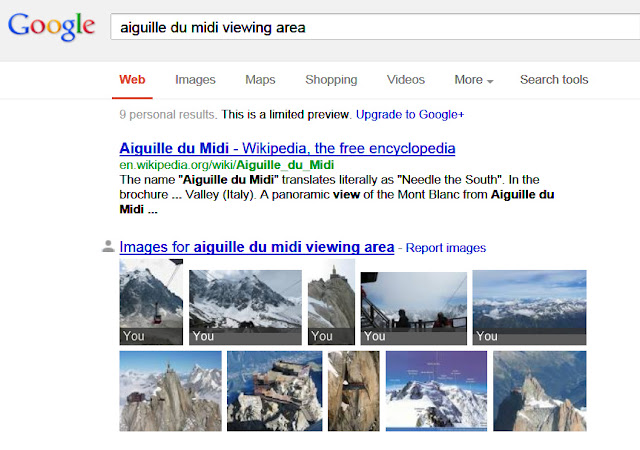 Here's the professional aerial photograph of the viewing platforms. Actually, seeing this, I realize I only made it to one of the lower platforms, the one farthest to the left. There's a very protected route to that one, with fewer scary visuals. That's Chamonix down there in the valley. That's where we started. 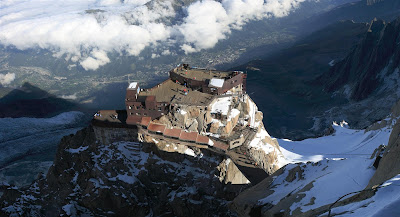 
What had I ever written about mini mustangs? There have been miniature horses in our little 49er Festival Parade, but mini mustangs? I Googled it and there in a row of four photos was a picture I'd taken of Linn's Mini Mustang! Here's what happens when you click on a photo in Google, which shows me just how much shows up in Google. 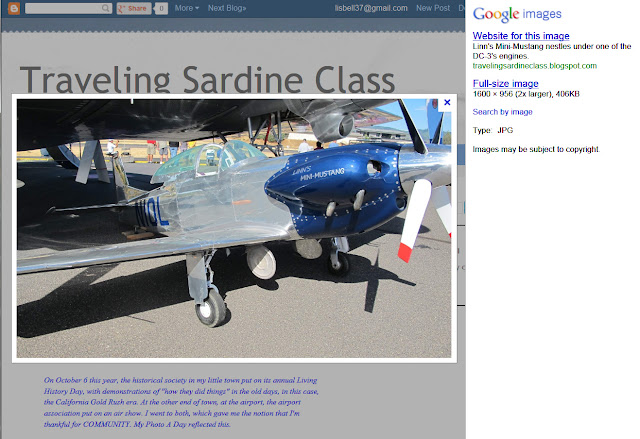 If you ever appear in my blog photos, you'll probably appreciate that I try not to include personal identifying information beyond the occasional first name. Google so wants me to identify everyone and link the world together, but I resist.

The mini mustang picture was taken at airport day festivities at our little airport, nestled under a DC-3. It's a two-part blog, with the earlier part of the day spent at a pioneer days festival.

No question what that was about. On a quilters tour to southwest France in 2011, we'd taken a coach trip to the Guggenheim in Bilbao, Spain. Our Basque guide didn't come with us that day since we'd have a museum guide, but he explained to us that we could rendezvous for the trip home under "the poppy" and summon our bus driver for the trip back to St-Jean-de-Luz where we were staying. "You can't miss the poppy," he assured us. Whilst we were wandering around trying to find out where the heck the entrance was, we located the poppy. 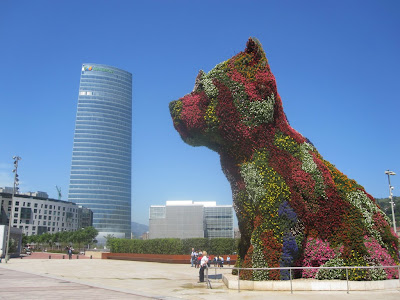 Oh, Puppy. It was the Basque accent. I admit this photo was supplied by one of my fellow travelers. I'd idiotically left my camera on the bus because we'd been told that no photos were allowed in the museum. Notwithstanding the fact that many fabulous photos were to be had of the exterior, the prohibition of photos inside was not well observed. I got a lot of nice photos from several people on the tour so that I almost feel like I took photos myself.

Puzzling, until I figured out that Fastlane referred to an Eagles tribute band that had performed in our little town in the summer. Searched my blog internally and found that Lonnie Garcia was one of the performers. But what's with the very HGTV-ish reno reference? No renovations were mentioned.

I finally recalled that the band was from Reno, as in Nevada. In fact, there seems to be a whole industry in tribute bands based there, all on one website. This was one grand experience. I'm not sure it doesn't bring just as big a grin to my face as conquering Aiguille du Midi. 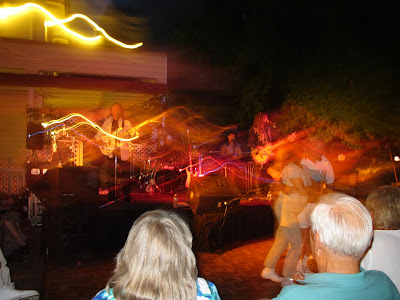 Yes!  When Sister and I went on the Experiencing Provence photo tour last year, we'd gone to the top of Mont Ventoux. The mountain towers over the Provençal countryside, a landmark, a subject of paintings and photos, a challenge to Tour de France teams. I assumed without thinking about it that the 2560 referred to its elevation but when I pulled up my own photo of the road marker just below the summit, that clearly wasn't what it referred to. 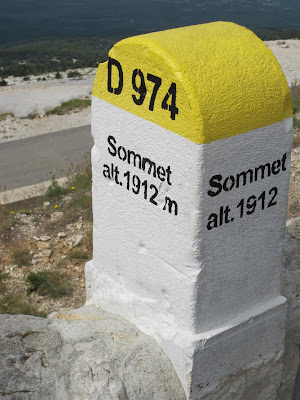 So I Googled the phrase and find:

Caromb, a charming village near Mont Ventoux, Avignon in Provence. Famous for its Cotes du Ventoux wine, black figues and olive oil.... in the foothills of the Mont Ventoux. Sleeps: 6. Price guide: 1,460 to 2,560 € / week.

We were hoping for terrific views of the surrounding countryside, but it was a cold and blustery day, making the Mont's bare top look really bleak. That's Sister, shivering there. 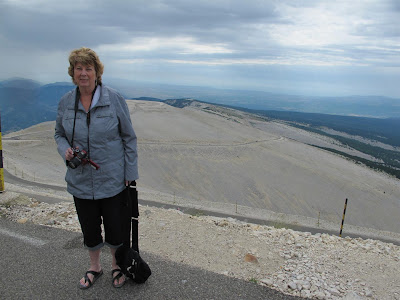 There are several of my blogs with mention of a quilting book I'm working from, The Tile Quilt Revival but only one with a picture that connects the book with what I'm working on. 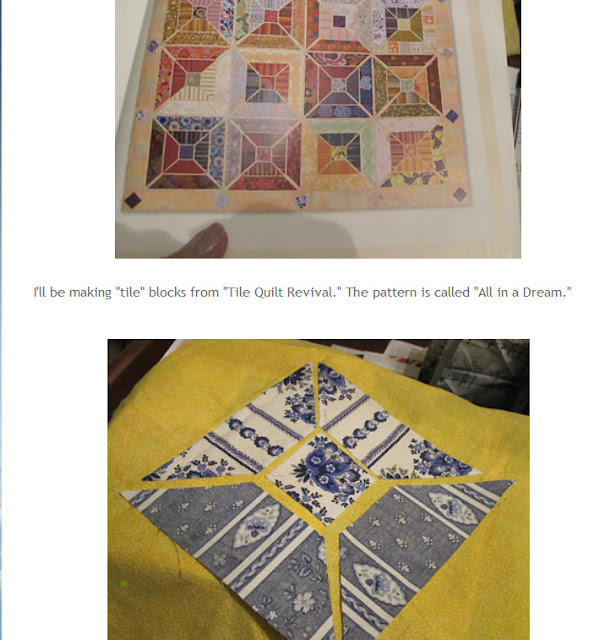 As far as I can figure, someone who knows my blog types the blog name into a Search box and comes here directly, like I do myself.

So that's the tour of the Search Keywords stats. With a little digging, most of them made sense. Sometimes it's more obscure.

I'll just give you a peek at the other two categories, no big explanations.

Here's Referring URLs. I'm pretty sure it means that a link here is clicked to arrive at my blog.

I don't find any link to my blog in that ontimemarketing(biz) link and I don't see those 61 pageviews in any other statistics I get. I don't even remember seeing it here before. Others I recognize, including Google from different countries and a fellow blogger's links from the US and when she's in France. And, hey, some of you always come here via Facebook.

Here are Referring Sites. I'm not sure of the exact distinction between this and Referring URLs, and there's clearly some overlap, but it has the simplest look to it.

So, like the title says, YOU are somewhere among these statistics, and I'm always curious about who might have come calling.

Email ThisBlogThis!Share to TwitterShare to FacebookShare to Pinterest
Labels: potpourri