Plans derailed this afternoon by a power outage ... and it has fractured my sense of time. It's nearly bed time but I feel like it's time for supper. Although since I finished off a late lunch with a whole bunch of ginger snaps, I'm not starvingly hungry.

It's been a long time since I did a Thursdays Out blog and the last twoThursdays (and the week in between) have been pretty nice. Two Thursdays ago was Thanksgiving and it's a big day in our little town. Sister and Brother-in-Law had house guests for the weekend and I was fortunate to tag along  for some of the long weekend (mostly involving meals, as Sister endeavors to feed me real food).

It was one of those situations where we couldn't believe we hadn't met before. The Husband has been BIL's best friend since the 9th grade, high school and some college years spent together. Sister has known them since a couple of years before she and BIL were married and that was a long time ago. Since the friends wouldn't know until the last minute what time they could to arrive on Thanksgiving Day, we took them to participate with our local custom, the Thanksgiving dinner at the Community Hall, come one, come all and donate what you please. It's cooked and served by our friends and neighbors, and the walls are decorated with elementary school students' art work.


After lunch we gave the visitors a walking tour of the town, then a driving tour of our development. Friday I was still working on my quilt for the auction, due that afternoon, while they all went off in quest of Black Friday bargains. We reunited for dinner at the country club.

Saturday I finally got out to the craft fairs in town, while they all went off boon docking in another county, looking for an old family gold mine and getting shot at  by a) some miner who thought they were claim jumping, or b) some hunter who didn't notice four noisy people traipsing around. Neither option was good, so they hightailed it out of there.

The local quilters guild had one venue with quilting crafts and sweets available for sale.


Across and down the street in the same Community Hall where we'd eaten the day before, the traditional town Christmas Craft Faire is held.


There's another little town down the road and for the past two or three years, people who couldn't get space in the Community Hall opened another Craft Fair and Flea Market here.


At the end of the day, Sister called to offer leftover turkey for dinner (yes, she'd cooked a turkey on the side to have leftovers).

The Soroptimist Winter Tea and Auction was held on Tuesday.

That brings me to last Thursday. After several beautiful days, the weather was beginning to turn. Someone authoritatively announced that rain was due to arrive at 4 o'clock.

I had time to kill between NeedleCrafts and a nail appointment, which I thought would be great to do at Mountain Sage. 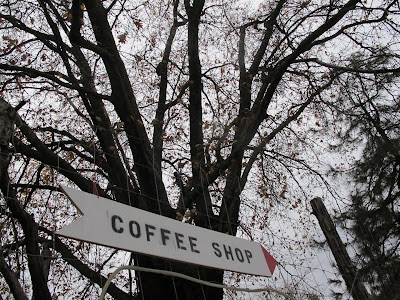 They were almost ready to close...winter hours, a new employee, but she promised she wouldn't kick me out until she finished up her tasks and absolutely had to go. 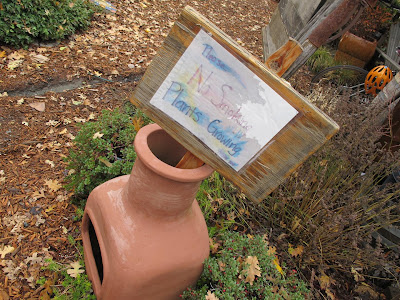 I settled into the manicurist's chair. The wind began to whip and the rain began to pour at three o'clock. So much for such time certainty.