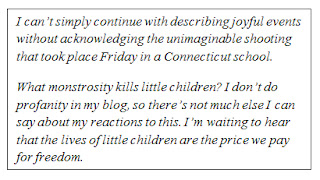 Last Tuesday I was standing in line at the Yosemite Village Food Court, waiting for my French toast to finish grilling, casually chatting with the man next to me who was waiting for his and his wife's pancakes. He mentioned that they had reservations for the dress rehearsal during Wednesday's lunch for the Big Festival Event at the Ahwahnee, for just the price of a lunch from the menu.

I'd heard about this access to rehearsals, but was only moderately interested, having attended the actual BFE the past two Christmas seasons. It's a spectacular four-hour Renaissance event, featuring pageantry, music, good humor, food, and wine . . . .  The premise is that the Squire of the manor has invited the villagers to his Christmas banquet, and we are his villagers. The meal is served in eight courses through the evening.

Sister-in-Law stood in the grill line even longer than I did and came back enthusing about the prospect. I was still lukewarm. But Sister and Brother-in-Law arrived a little later that morning for their two night in Yosemite, and they were as enthusiastic as SIL. So . . . I'm easy. I'd met Traveling Friend on my tours in France and she'd be arriving Wednesday, for a stay that overlapped ours by 24-hours. We tossed her name in the pot for five reservations for lunch at 1:45 Wednesday, hoping she'd get in on time, given weather forecasts for snow.

TF made it by the skin of her teeth. The Dress Rehearsal runs from 10 a.m. to 5 p.m. If they had been running through it sequentially, we came in near the end.

One of the absolute no-nos of the BFE is NO PHOTOS. In a fit of optimism, I carried my camera to the Dress Rehearsal and asked as we were being seated whether photos were allowed. "YES."


Yes yes yes. Because I almost feel like I'm getting away with something, I'm not mentioning the actual name of the BFE here, so it won't show up in a Google search. If you haven't guessed its name, check this link and scroll down to Food and Wine Events and choose the likely candidate.

Dining room patrons were seated on one side of the grand dining room, moving in and out as they finished eating and new diners were escorted in. The other side of the dining room had chairs and tables to which we could move to when done eating and continue to watch the rehearsal.

So here we go. I can't tell you exactly what is happening in each picture. Sometimes I could hear direction from Director and Producer Andrea Fulton, but more often not.

Lords and ladies file in. 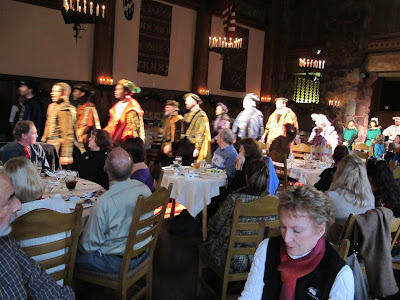 The Squire of Big Event Hall addresses us. 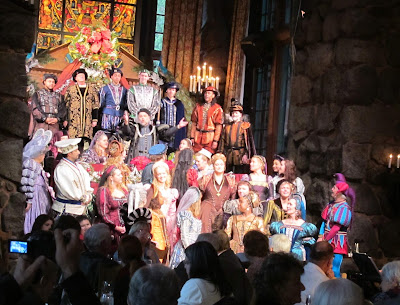 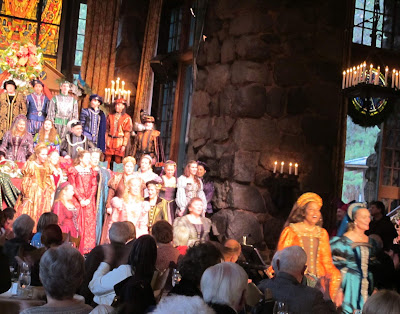 Our lunch is served . . . I have corn-fed beef meat balls with a mushroom gravy over noodles, and seasonal vegetables. 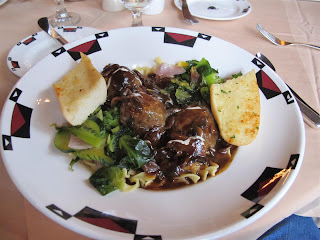 Rain outside the windows is turning to snow. 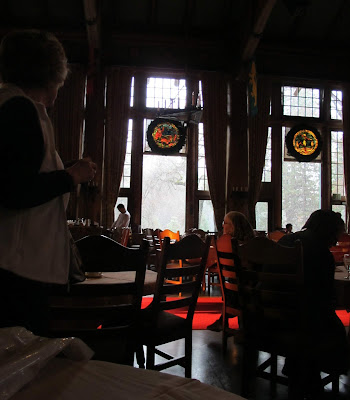 Cameras turn toward the snow swirling outside now. 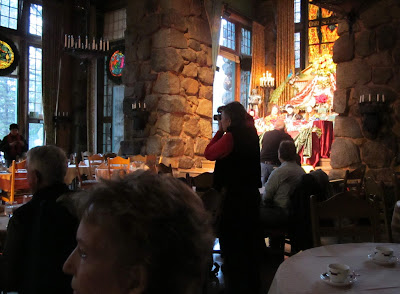 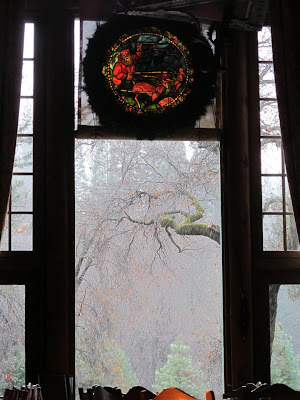 Lady Delphinium and the Parson make ready to file in, in a swirl of motion. 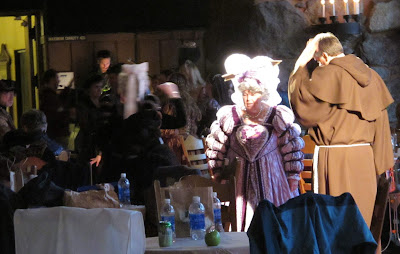 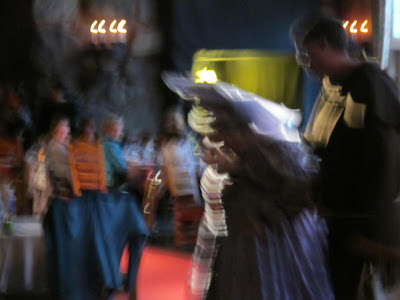 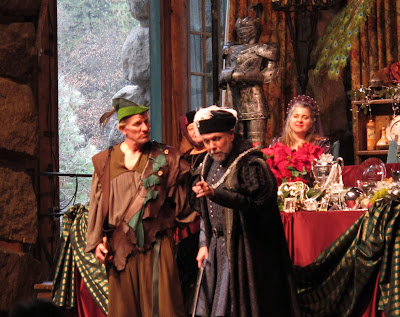 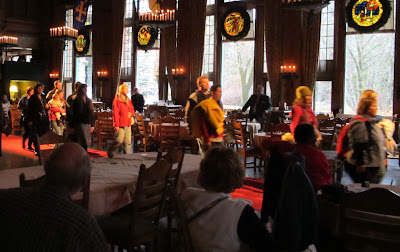 The families settle on the steps. 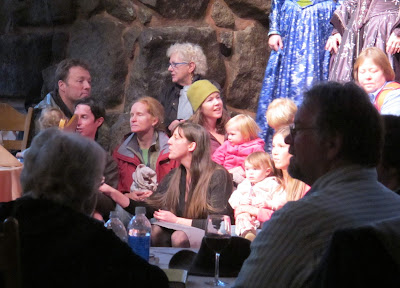 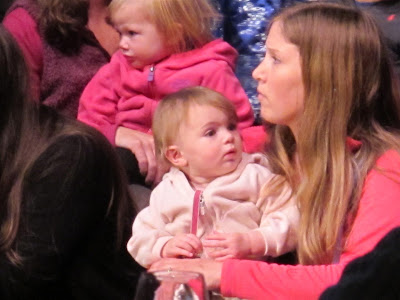 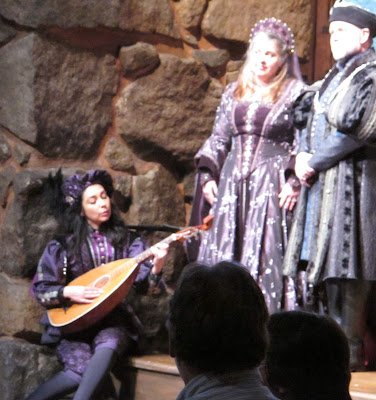 The Jester, without his jester's hat . . . I didn't recognize him. Sister insisted. "Look at the costume." But I knew him as one of the actors who eats at the Food Court. He performs a most impressive musical number. If he did it at dress rehearsal, we were not there for it. 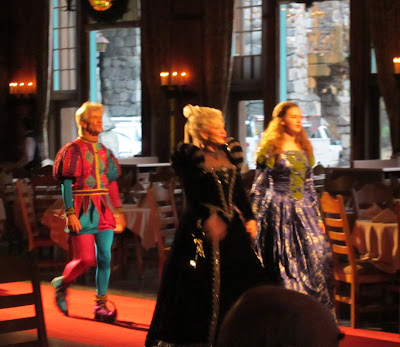 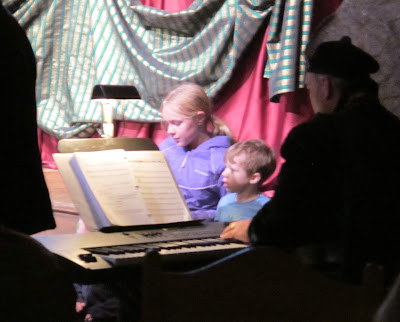 The Housekeeper speaks out. She is played by Andrea Fulton, in her 63rd year performing in the BFE (she did begin at age 5), and her 34th year as Producer and Director. 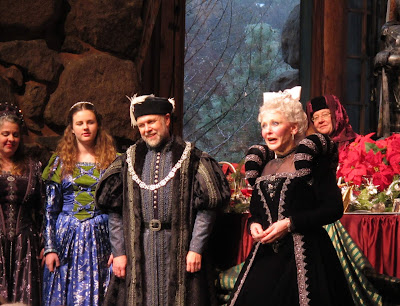 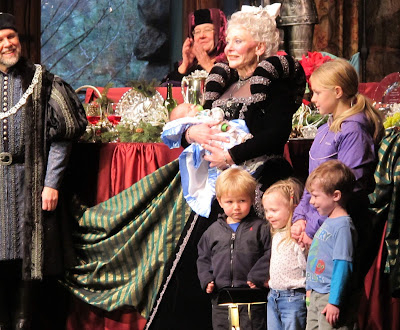 The Housekeeper directs the chorale. 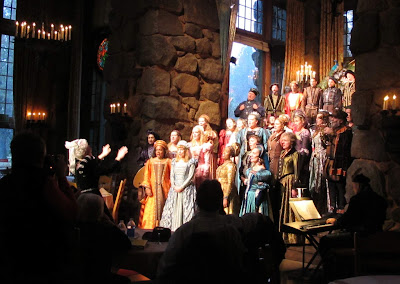 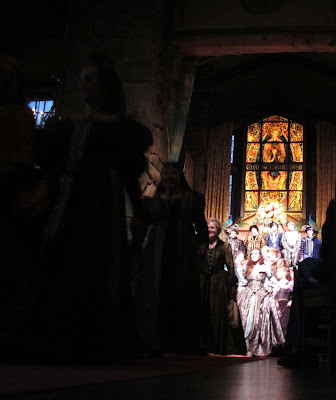 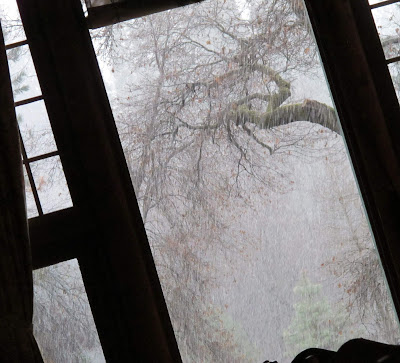 The virgins sing, and although it's not the end, we must eventually leave. 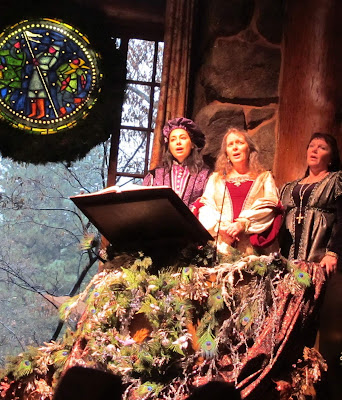 There was so much nostalgia for Sister and me. Our parents belonged to a social group at their church throughout our childhoods. Indeed, our parents stayed connected with the people in that group throughout their lives. The group did amateur musical productions, including a Christmas one each year. Some talented singers from the church choir were in the group, and when one of the soloists sang a carol at the BFE, I think it was "O, Holy Night," with the snow outside whipping by the window, it evoked such fond memories, and Sister and I teared up. 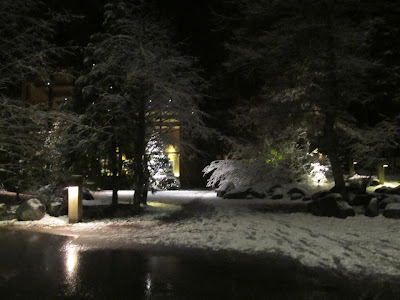 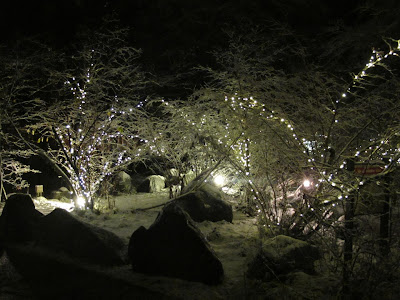 As it turns out, I'm really glad they talked me into going to the rehearsal.