Black & White and Into Color

The word of the day for my December 4th Photo A Day challenge was Black & White. We'd had that same word a few months ago. Participants have a variety of interpretations, but both times I thought of taking a black-and-white photo. I consulted the camera's micro-print manual the first time and discovered how to get the camera to do it (last resort would have been a software manipulation but I didn't know how to do that either). My short term memory being what it is, the only part I could remember was that it was possible. As distraught as I am about this memory thing, I'm learning enough more French to surprise myself, so maybe I'm just dumping what I think of as less complicated memories.

I headed out on activities for the day, keeping an eye out for the perfect subject for a black and white photo. Not being in Yosemite yet,  I had no illusions of doing an Ansel Adams. I did have an afternoon trip to the Little City Down the Hill planned to pick up some items for an upcoming Yosemite visit (tons of cat food for the cat sitter, for example).

But first, I had a doctor's appointment to see about a weird thing growing on my finger (my middle finger, so the photo is a little rude to publish here). The doctor was slammed with unexpected patients and by the time I got out of there, the world was practically black and white on its own. I didn't think I could wait any later. (An indoor photo didn't occur to me.)


Two days later was Thursday Out. There had been a flood in our NeedleCrafts room a few days earlier, but the Thursday user groups did some shifting around to accommodate us. We thought the flood had resulted from the heavy rains, but it turned out to be a broken rusty pipe. Lots of manly plumbing consultation was going on around us. With all that I forgot to take pictures of the group members' needlework accomplishments. When we returned from the lunch room to the meeting room, we walked out to find fog -- or in our case, being in the midst of high clouds -- sneaking in among the trees. 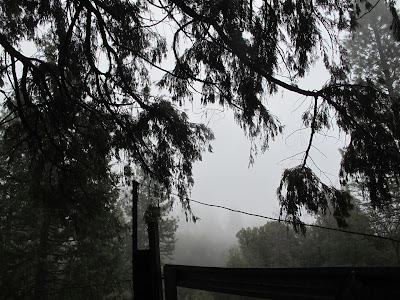 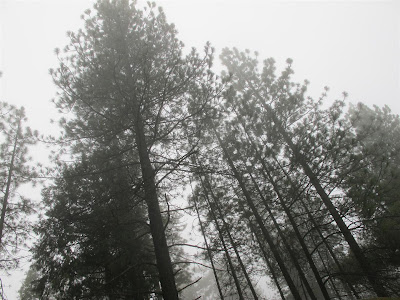 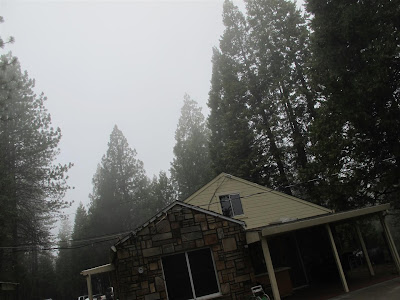 Fog had taken over the Central Valley of California as well, a common winter phenomenon, and it crept into the mountains. Daughter was due Thursday evening, to pick up my truck and leave her car at my house, to be swapped again when I go to her place for Christmas. I worried about her out there, driving up and down the state in the fog over the past couple of days, and finally trying to find the rather difficult way to my house after dark.

There is no short and easy way to make a trek straight north in California. Look at a map. I think the usual example is that San Diego is east of Reno, Nevada. The major "northbound" roads really head northwest, so to get straight north requires a long two sides of a triangle on major roads, or a series of obscure minor roads that only the locals can do without concentration. Daughter had several reversals of course trying to make her way here.

Friday morning she transferred all the possessions she travels with from her car to my truck. 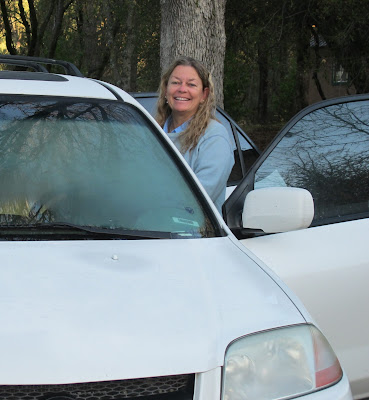 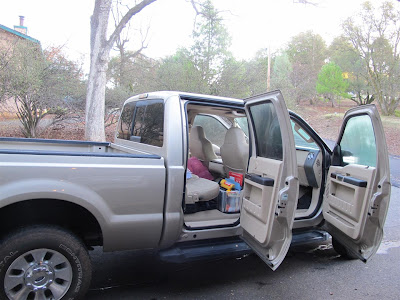 We headed off to the gas station to fuel up the truck for her trip home. Then it was to be pedal-to-the-metal for me to finish up the newsletter I'd been working on so I could leave with Sister-in-Law Sunday morning for Yosemite.

But I still didn't have an undisturbed day to work on it. A Devil Cat in my household has taken to peeing on anything made with goose down. I first discovered this when I finally traced an unpleasant odor in my bedroom to pillows stacked on the floor on the far side of my bed, saturated in urine. They were unsalvageable, and had to be taken to the dump transfer station. So unless I'm sleepwalking and missing the bathroom, a Devil Cat did it.

I didn't begin to make the association with goose down until I found a wet stinky spot on the down throw I use as a cover in the summer. Then one afternoon, I caught that scent again, walking down the hall toward my bedroom. I didn't manage to zero in by nose at that time, so waited until after dark to shine a black light around the hall and house. I found a splash of biological material on my down coat, which was on a hanger on a door jamb in the hall, awaiting transfer to the closet in the kitten room. (The closet in the kitten room is another whole story.) Yup. The nose confirmed.

Which brings us to the down quilt my daughter slept under for her overnighter. Concerned about its welfare, after she got up for the day, I stuffed it into my closet and closed the door. I returned home after the fuel-up and Daughter hit the road. When I got home, the closet door in my room, a heavy mirrored sliding door, was open. Cats had previously opened the door on the other end, but it is jammed shut now. Never the closest door on this end. The closet was in a shambles, with things knocked off the shelf and clothes off hangers on the floor.

And there was the stench, a full bladder blast or a repeat performance in the middle of the down comforter. All I did while I hauled the poor comforter, the first I'd ever bought, a Scandia Down, to the washing machine was wail "Bad cats! Bad cats!" (One doesn't really stop to analyze reasons why Devil Cat or Cats does this thing and whether bad cat accusations may make it worse.) Scandia Down is huge and probably had only been dry cleaned in its past, but I stuffed it into my washer. When I opened the washer to make sure it was properly submersed, down flew out of the machine.

Sparing you the whole story, have you ever tried to put down in a paper bag? 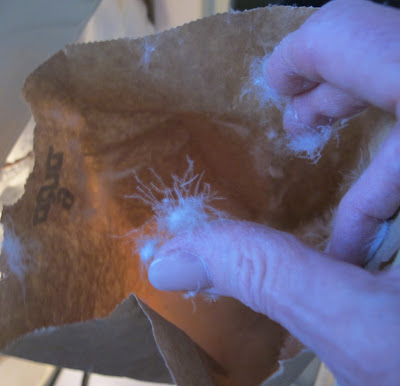 Fortunately, the shedding stopped after a few spins in the dryer, and no holes were found in the quilt.

I did a some work on the newsletter on dunk-the-down day, but still had a good ways to go on Saturday. I took a break midday to go to town for mail and a few other last minute errands before the trip. The world was coming out in color again. I did a U-turn to come back and take a colorful picture of the firemen tending to the hoses.


I stopped by Sister's to drop off her mail. Red berries were massed on the nandinas and a row of this purple flowers sprawled along the front walkway, bent down by the storms that had passed. Sister-in-Law thinks they may be naked ladies (amaryllis belladona?). 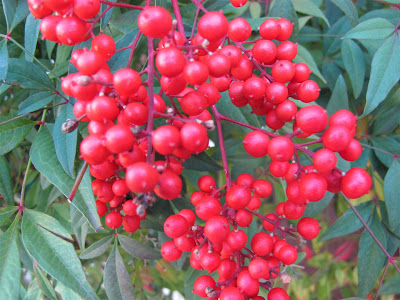 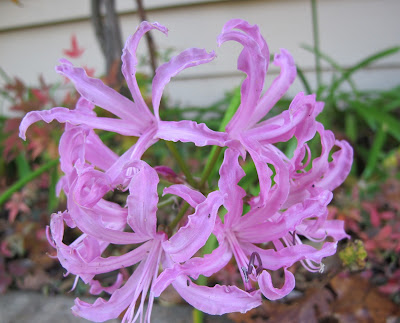 When I got home, the feral cats had decorated their eating area with these artfully arranged feathers. (I feel awful, but try to keep in mind that they're improving the gene pool of the little birds.) 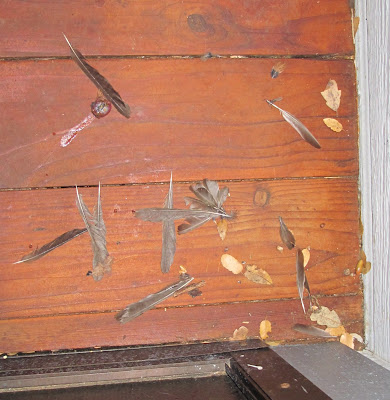 Back to Word and the newsletter. Naturally, the basic technique I'd been using in Word for the several years I've been doing it suddenly failed to cooperate and I don't know how many hours I spent trying to wrestle pictures and captions into place, only to have them scramble like some busted football play. I  finally hit "Send" at 1:45 Sunday a.m. and started to pack.

I did get a modicum of sleep, but when my alarm woke me up sometime before I would have liked, I knew I was supposed to get up, showered, and dressed right away, but not why nor what day it was. I was half into the shower before I remembered "Sunday" and "YOSEMITE." Sister-in-Law and I were on the road before 10:30.

It's a rule that no matter how many times you pass Half Dome, a picture is obligatory. (Waaay back there.) 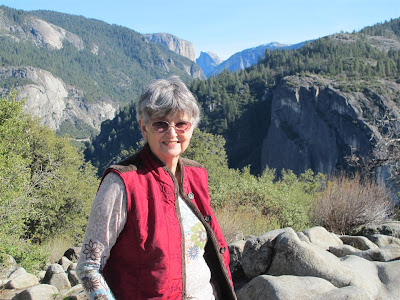 We arrived too early to get our room key, but we could select our room. That lead to making rounds of the various gift shops.