I'm a softy about the kitties (hence, you're about to see a few kitty photos). Heck, I'm pretty much a softy about everything. I cry at sad movies. I cry at heartwarming stories. I'm still desolate over the loss of my little Ferguson and when a Facebook friend publishes his or her kitty's photo on FB with R.I.P. after its name I break into sobs. I snuffled at the four-year-old girl in the You Tube video where she is wailing that she's tired of "Bronco Bamma and Mitt Romney" on TV. 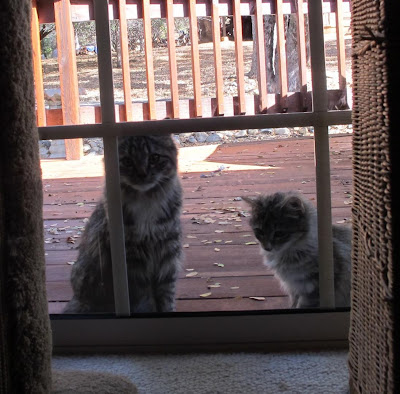 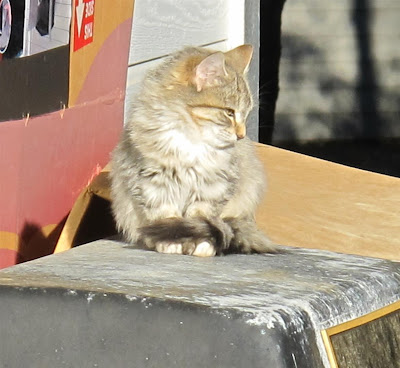 I catch a glimpse of a group of deer passing by a side window and get there with the camera after most of them have passed out of view. Then I hear a dull clashing sound. These two have moved into view. 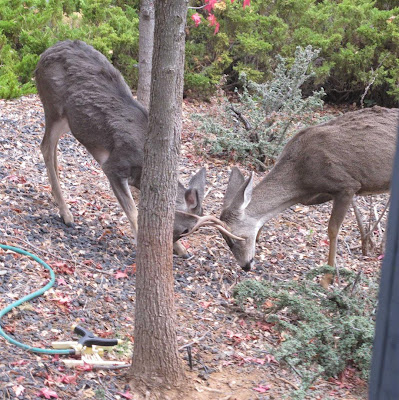 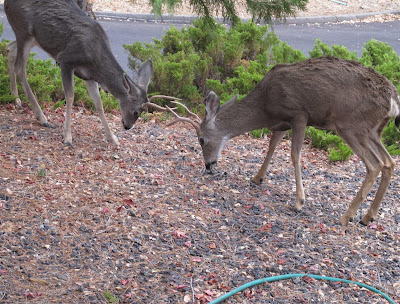 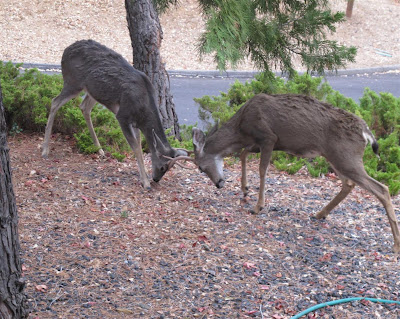 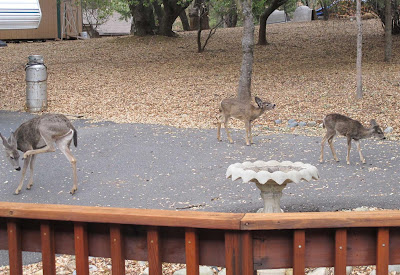 Today I had to go to the Little City down the Hill to do some shopping. The main thing that made this the day was that I was almost out of gas and thought to pick some up cheaper down there. What a shock when I pulled up to the pump at my favorite Cheap-O gas station and it was ten cents a gallon more expensive than my local station. I only bought enough to get back to the home station for the fill up.

I also took a copy of the movie schedule, since I noticed three things playing that I'd like to see and another one due out soon, this after a really dry spell movie-wise.  For an old softy who is freaked out by horror films, appalled by mob stories, indifferent to slapstick, bored by "dumb," slightly spooked by Super Heroes, you'd probably be surprised at what I do like. I chose the one to see today as the one likely to end soonest. You know ... the one listed down toward the end of the schedule. It was Taken 2, a sequel to Taken. It's Liam Neeson as a retired CIA agent, family in jeopardy at the hands of bad guys, exotic foreign setting, lots of shooting, hand-to-hand combat, torture and car chases. Car chases with lots of crashes, with an ironic little running theme that his daughter failed parallel parking on her driver's license test.

I downloaded photos from the publicity site, but they were about the size of a postage stamp, even the ones boasting lots of pixels, so couldn't use them.

I'm trying to decide whether I have the nerve to see Flight, wherein Denzel pulls off a miraculous save in a realistically portrayed crash landing. I've only recently -- and tenuously -- graduated from white-knuckle flying, so I'm not sure this wouldn't cause a set-back, but I just so much want to see it. Then there's Argo, the improbable but true story of the rescue of several Iranian hostages "back when" (Ben Affleck). And, of course, Skyfall, the newest James Bond (with the haunting/haunted Daniel Craig) is coming soon.

Even I ask why I get such a charge from this action/adventure/espionage genre, and I think it may be that they are the heirs to the old westerns I grew up on, where injustice is put right by the hero figure. They do things I'd be afraid to do and I get the vicarious thrill and satisfaction. Oh, and rugged, hot leading men.