So much for writing lots of posts from quilt camp! Too much work, too much laughter, too much confusion, too little sleep, and blogging does require some time and concentration. Not only that, I didn't finish my quilt project and it has a deadline, so you can guess what I'll be doing until it's done.

I decided to make a To Do List today (on the computer, so it won't get lost in the stacks of papers) to remind me of things I have to do and set some priorities. I made a long list and all the priorities are 1. I'll be working on the 1s over the next few days.

There's one thing I can't procrastinate writing about because it has a deadline, too.

You might have noticed I really like going to France, and in my heart, Paris is one of the jewels of the world. Even if you haven't been there, I'm sure you have images in your mind of Paris. 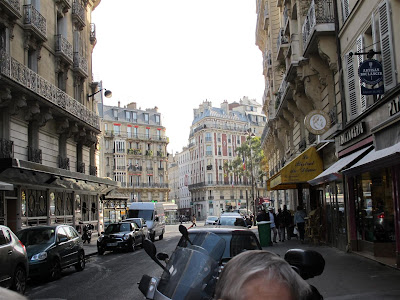 What you probably don't think of is a Paris that has the most skyscrapers of any city in the European Union. Many of these are quite beautiful, but they are located for the most part in the arrondissements around the edges of the city. The Eiffel Tour is what we look upward at, and the Montparnasse Tower, which most people would rather not look at.

There are plans underway to build more skyscrapers in Central Paris.

There is also an organized effort to mobilize those who don't want to see this happen to send letters from all over the world to the Mayor of Paris on November 24, this coming Saturday. My letter is on the refrigerator, ready to go, and I'm asking those of you who would like Paris to maintain the character that makes it Paris to send your letter also.

Link to this blog by David Downie, who describes this in detail, and provides sample letters and the address of the mayor.

The mayor's last name is Delanoë, with those two little dots over the final e. I can do this by holding down the Alt key and keying in 0235. (These must be "real" numbers so  this doesn't work with the numbers at the top of the keyboard. Some laptops have a function that changes a part of the keyboard into real numbers. ) The ë pops up when you release the 5.


I'd rather see the Eiffel Tower and Sacre Coeur as the features I look up to in Paris, and not something lost in a glass jungle.


See you when my priority list gets knocked down some.