Wow! The weekend is over and Sister and Brother-in-Law are off to a mini-vacation to recuperate from the event. I'm waiting for my contractor (the builder of Garage-Mahal) and someone from the propane company to arrive to arrange the relocation of my propane tank.

Oh, did I mention that I was considering an addition to my house? Well, a construction project is coming to a place near me. But that's not part of Oktoberfest.

I left you with pizza with bunch of Morgan owners on Friday evening. Some of those people came to the pizza parlor in regular cars, so I am only able to supply only a couple of tiny dark visions of Morgans in a parking lot. I have a request for more Morgans.

Saturday, a trip to Yosemite was on the agenda, with the Oktoberfest festivities (is that redundant?) to follow at Sister and BIL's house and Garage-Mahal. BIL set out first for the motel where the travelers were staying. He's the leader. 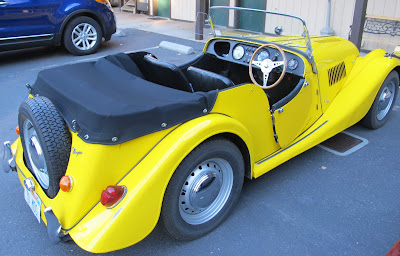 Sister, and her BFFs Laura and Linda, and I will follow up at the end of the line in the SUV. We will be returning earlier than the crowd to finish cooking the feast.

In the parking lot of the motel I catch some guys kicking tires and some photos of parked Morgans. 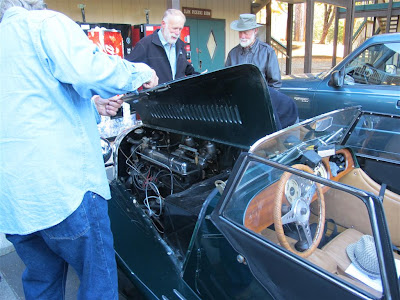 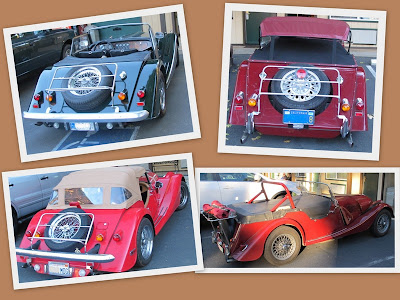 Unfortunately, for purposes of getting a picture of a parade of Morgans heading off toward Yosemite, they trickled out of the parking lot and disappeared into the glare of the sunrise. We had one to shepherd who needed to buy gas. Everyone had been encouraged to buy gas before coming up to the more expensive mountains, but there's always someone . . . or two or three. We were tasked with making sure the last guy made the turn into the gas station inside Yosemite, which is not altogether obvious.


Weather forecasts for the weekend were "cooler," but no precipitation due until Sunday. Temperatures for the drive up were in the upper 40s to mid-50s, strangely enough, warmer at the high point of 6200 ft elevation where we stopped for gas. Those riding in the open Morgans (alas, a few carpooled in sedans) did admit it felt pretty chilly.

The first goal of everyone on arrival was breakfast. Our carload headed directly for Yosemite Lodge, with thoughts of blueberry pancakes making our mouths water. 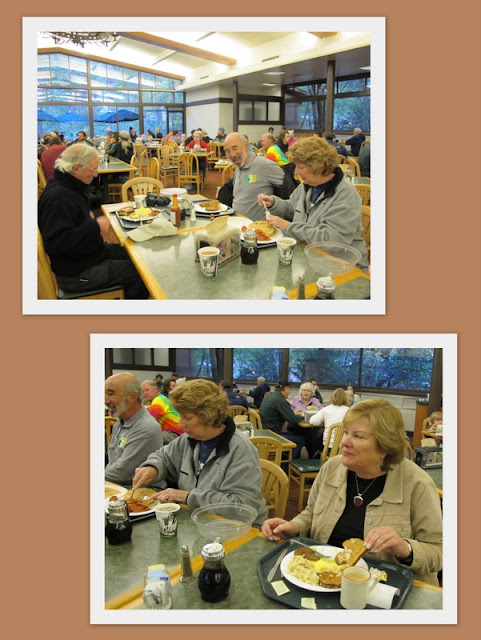 We told our park visitors the various things that were available to do. Our little group went shopping at the store at Yosemite Lodge and at the gift shop at the Ahwahnee. I showed great restraint by buying only one Yosemite t-shirt and my 2013 Yosemite wall calendar.


And then it was time for lunch.

Only it was only about an hour since we'd finished breakfast. We took seats outside at the Ahwahnee Bar and discovered that it was an absolutely gorgeous day. 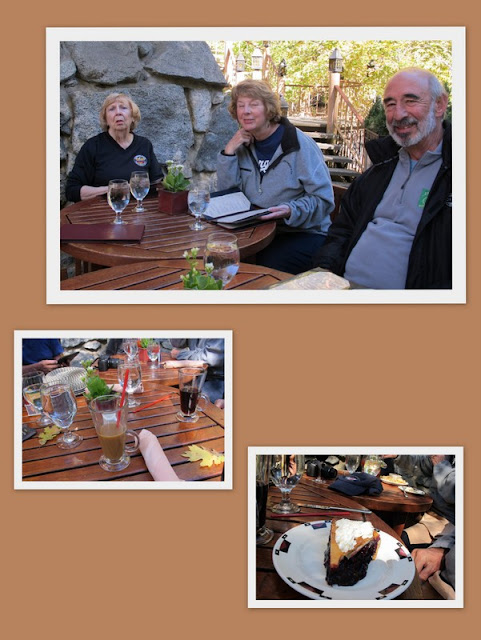 
Then the cooks had to head for home. 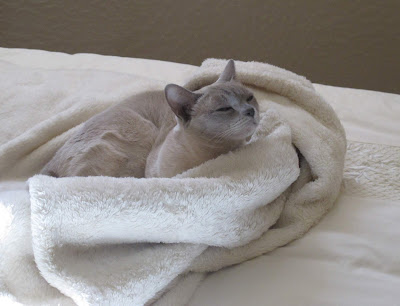 Hello, sleepy Lola . . . hard to tell where Lola ends and her blankey begins. 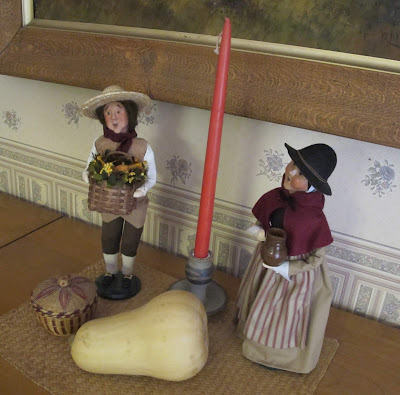 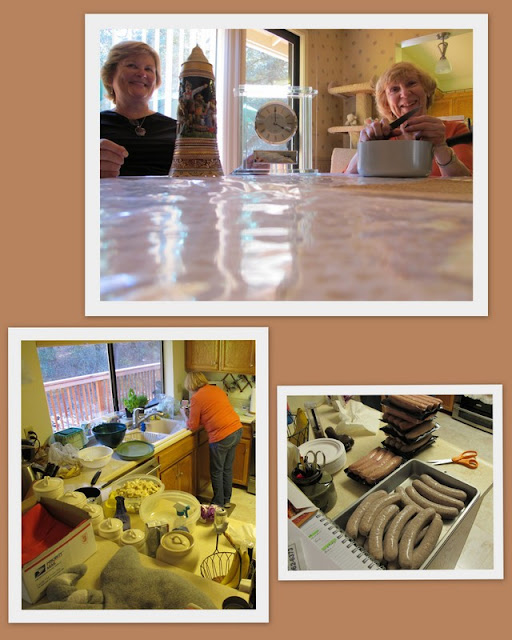 Laura and Linda finished cutting up fruit for the fruit salad at 4 p.m., at just the right
time to pose for my Photo A Day, the prompt for which was (ta da!) 4 o'clock.


There are other things to finish up. Linda continues on German potato salad and Cole slaw, and Laura starts getting the sausages ready to grill. I'm the bar tender (although as a non-drinker I will let the people with the BYOB-wine figure out the cork-pulling contraption), I set up glasses for the beer, ice cubes for the iced tea. This will turned out to be mostly do-it-yourself on the part of the consumer. 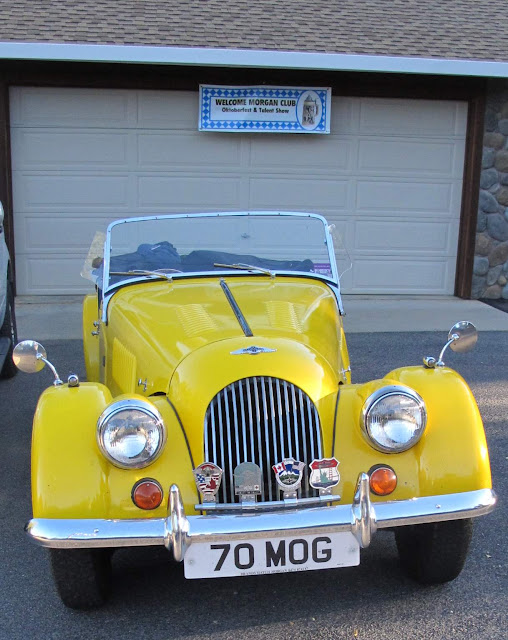 BIL arrives home to rearrange the cars and plan where the guests' cars will be parked. 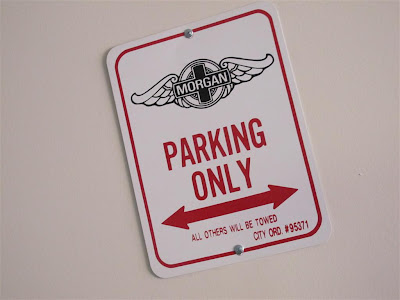 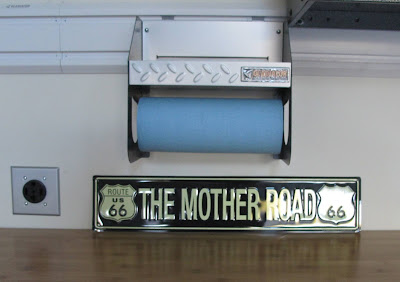 A bit of motoring memorabilia: Route US 66, The Mother Road . . .
Ah, I knew it well, having traveled it numerous times, by auto and by Greyhound. 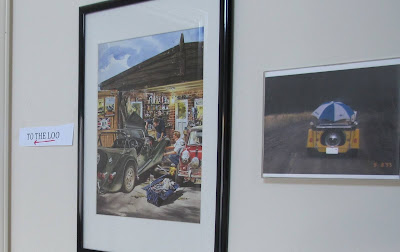 Morgans are English cars, so it's fitting that signs point out directions "to the loo."
Looks like the yellow MOG was traveling in the rain. 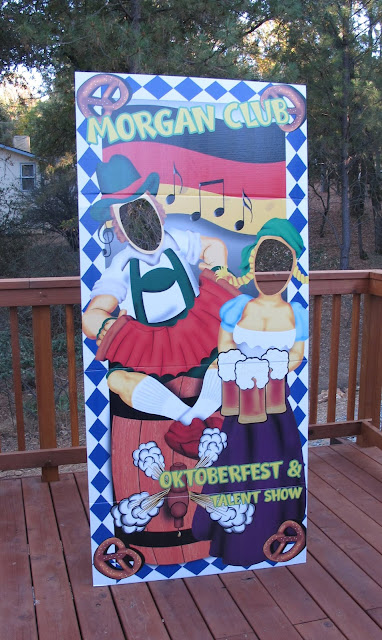 Get your Oktoberfest photos here!"

Morgans arrive, but unfortunately, some of them have parked
in neighbors' driveways, so I fail to find them for photos.


Guests are forbidden entrance to the upstairs of the Garage-Mahal, when its awesomeness will be revealed and dinner will take place. 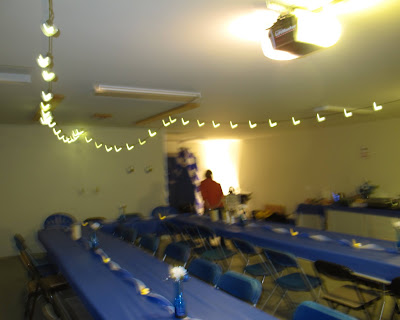 Here's the table set up, upstairs. It wasn't until this was enlarged
that I discovered it is out of focus, so let's just pretend it's some
sort of special effect that I applied on purpose to give atmosphere. 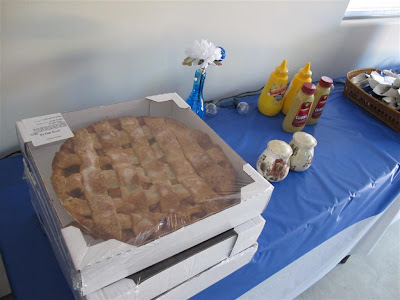 Apple pies. The German Chocolate Cake Linda made is in the
refrigerator and will come out when it's time for dessert. 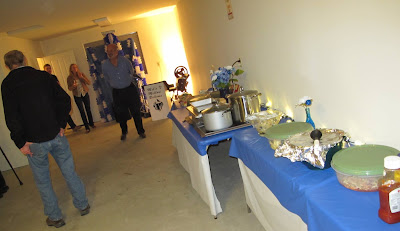 The big reveal and party goers are let up the stairs.
They were duly impressed. 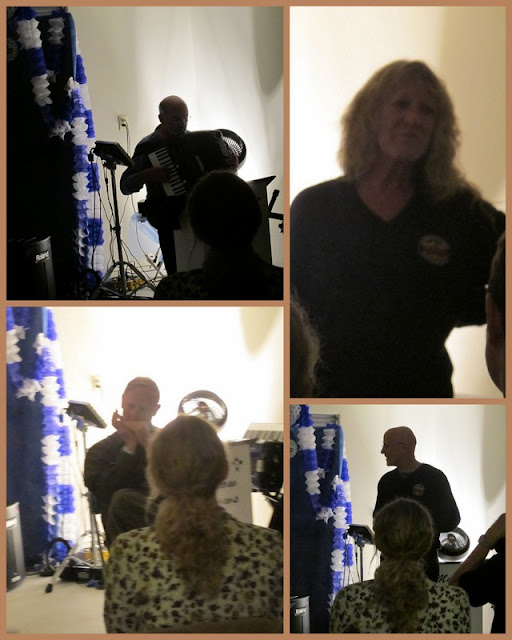 A few shots from a distance of participants in the Talent Show.


At this point I suddenly ignored my camera. Perhaps it's because I was still chewing my dinner until clean up time. The Morganeers gathered themselves together to return to the motel, to rest up for breakfast together Sunday morning at the The Grill at Pine Mountain Lake, one of our favorite eateries dining venues.

I took my camera to breakfast. And forgot to take it out.