Was last night the first episode of 666 Park Avenue?

Knowing nothing about it, as I went through my TV Guide highlighting my TV schedule for the week, I didn't highlight it. Reading the little blurb about it didn't change my mind. Then I saw Terry O'Quinn interviewed on some show. I like him, so I went back and highlighted.

﻿
Of course, it telegraphed that no good would come of this when a young couple happened into the wonderful opportunity of being property managers of this classy address. A couple of residents in the building were sucked from the earth in some weird manner, engineered by Terry O'Quinn. About ten minutes before the end, the female part of the young couple heard something in the stairwell of the many-storied building. She goes to investigate. The door slams behind her. She can't open it. She senses a presence several storeys down and begins to descend.

I change the channel.

I don't do scary. Nor spooky, if there's a difference. No vampires or zombies. No Birds, Flies, Exorcists or Psychos. No Real Housewives. No gore, until they invented the CSIs and Bones (about the goriest I can take and only because the characters are so charming). But did see, to my regret, The Omen.

I can do adventure and espionage and mystery and science fiction and westerns. Oh, and comedies and dramas.

Sorry, Terry O'Quinn and the cast that I like.

I went to November, by David Mamet, on Sunday. Photos aren't allowed inside the theatre, so I take them of the outside windows, with lots of reflections, and in the lobby area, where the Columbia College Jazz Singers are performing before the play, to gain experience before a live audience. 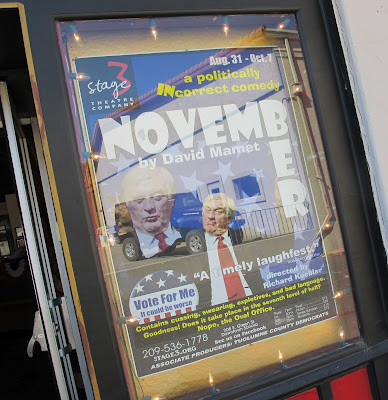 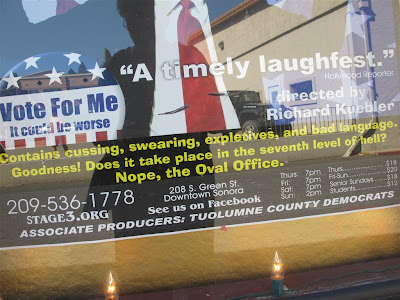 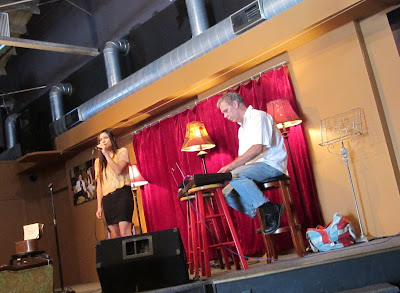 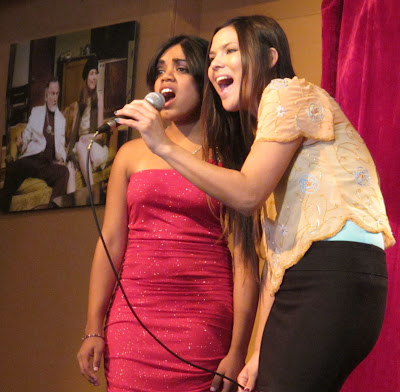 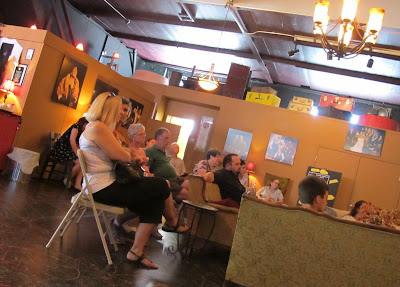 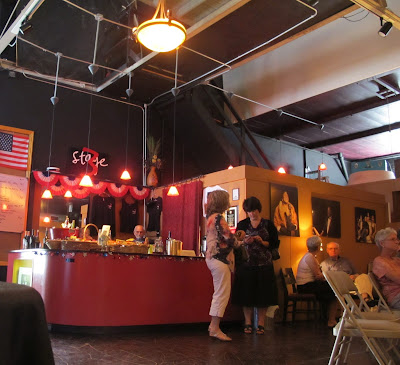 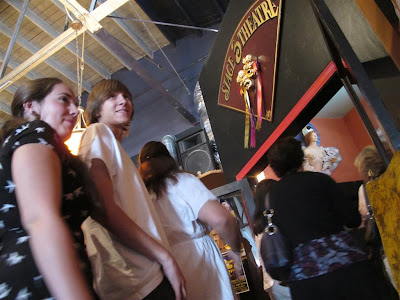 I went in with incorrect expectations. I thought we were in for biting political satire, but it was more like comedy with a nod to slapstick. The short first act established stereotypical greed and corruption of the President and his team, and the longer second act had faster-paced humor and eventual redemption. It plays through Oct. 7  at Stage 3 in Sonora.

When I came home from Sonora yesterday, I traveled by my usually fastest route home, just to see whether construction and detours that I'd been avoiding for weeks had been completed. Despite the occasional orange flag, the road was open and there were no signs of current construction. Good to know, despite the fact that I've become enamoured of jouncing along the scenic,  little-trafficked back roads to get to the city.

So today when I got stuck behind a slow vehicle that made the turn onto my scenic route, where there is no opportunity to pass, I continued along on the fast route. About two curves later, there was one-way traffic control across the bridge. The big bridge.  And then I was behind a rather big truck going up the hill. I always seem to shave my timing close. Or underestimate the time it takes me to get ready these days. I'd built in a little time for getting lost. I'm sure I know where the Imaging Center is, but it's wrong on Google Earth and how can I be right and they're wrong?

I'm still right. I made it on time.

Years ago, my first MRI was in one of those full body tubes. It was a Sunday and we'd driven a long distance. I said yes, I'm claustrophobic, and they said I'd have to return on a weekday for sedation. I said I'd tough it out, but throughout the procedure it was all I could do to keep from bolting. I held my eyes tightly closed until peeking on the way out, to see bright light and surfaces that made it seem roomy.

I did opt for sedation when I had the double-boobied scan before my breast surgery. That means taking a driver. Maybe I've chilled out in the past few years, or maybe it's the triumph of the ascent of the Aiguille du Midi, but this time it didn't worry me. He explained it to me. We were doing the thoracic spine and the lumbar spine, two separate scans. Each would be a series of short, um, don't remember what he called them, but they lasted from 2½ to 7 minutes per um, with short pauses in between, after which he'd announce how long the next one would take.

Sometimes 2½ minutes can feel like 10. Sometimes I count so I'll know how much longer I have to go. If you haven't had an MRI, you've probably heard they make a lot of noise. Well, they do. Each um had a different sound. Bongs, bangs, clinks, jack hammers. For each type there are nuances, grace notes, rhythm alterations. I got to grooving with the rhythm, trying to anticipate the changes. I felt like the conductor. Besides, I was up really late last night and it was a nice opportunity to lie down for almost an hour without any other tasks calling me. I had ear plugs to mute the intensity of the banging.

I drove home via my scenic back route. And when I got home . . .

Tiny Kitten was outside the new gate, watching as I drove into  the garage. After I got out of the car, I walked across the front of the garage to see what Kitten was doing, and there he was. (Squeal!)  Stripes. The Stripes whom I said last night that I hadn't seen since leaving on my trip. Stripes came out through the gate to see me. Unlike the other ferals, Stripes likes to get petted. Stripes likes to wind around my legs so I can't walk. Stripes was hungry.

Tiny Kitten is almost friendly. It comes close, but doesn't quite let me touch it. It was very interested in the interaction between Stripes and me.


If I'm featuring outside kitties, I need to include my inside babies. They of course stopped fighting for the top-of-the-tower position the minute I got the camera out.