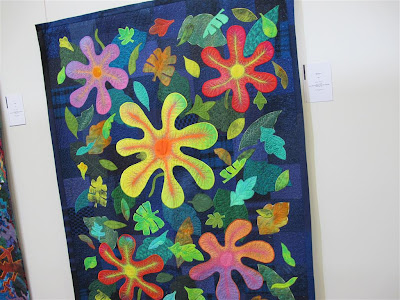 One of my regular blog readers just emailed me to tell me she is now officially worried about my absence from the blog rolls. I appreciate her concern and apologize to any others of you who might also have worried about this absence.

I have been having fun in France, and have walked until I dropped (or darn near). I don't know how many collections of photos I made about activities and how many I've started to write about, only to nod off over the computer until they lost their currency.

Last night I intended to make the effort because I did not have an early call today. In fact, I also intended to have an easy day of it photographing all the spectacular modern buildings and sculptures at La Défense. It's out where, if you look west from the Arch of Triumph, you see the Grand Arch of La Défense. Then I would spend the rest of the day blogging.

But last night, my mouse refused to recognize the computer. It may have happened when I accidentally turned off the Wifi function of the computer, which became fairly evident when the Internet went away, but I guess it also discombobulated the mouse. I have been swearing at the computer and/or mouse all day because I hate (that cannot be emphasized enough) using a touchpad. I've been immobilized. It has been all I could do to read a couple of blogs without wreaking havoc with some part of my system.

When the day started with thin clouds, I also abandoned my photography project, because much of the beauty of the proposed photos depends on beautiful skies -- all blue, or blue with spectacular clouds, to be reflected on the buildings. By the time I went out for lunch with Claire after her return from the morning's optional tour, it had started to sprinkle. We walked in the rain after lunch, and I fought with the mouse some more, and one of those button-pushes resulted in waking up the mouse. Truly, a joyful moment.

So this is Day 3 of the tour extension, or, in total, Day 16. I'm heading for home tomorrow. I've always heard you need to leave something to come back to in Paris, so I'll get my photos of La Défense next time.

There's been an interim event here. I stepped out to find Marie to check on dinner plans and went to her room on the 3rd (that's 4th in American) floor. While we were peacefully looking at a couple of new photos on her iPad, the fire alarm went off. Neither of us is much for spiralish staircases, but we set off downward, along with a hotel full of people. We finally stepped aside to let everyone pass, since we're too slow descending. A few people were trying to ascend, stating it was a false alarm, but most saying, "I'm going down anyway." It was an amiable crowd, absent the smell of smoke or sound or sight of flames. Most, however, remained in the lobby, refusing to go outside improperly attired for the rain.

Rumor in the lobby had it that someone had been  drying his socks. We just wonder what kind of heat source on wet or damp socks would set off the fire alarm. Everyone did very well in evacuating (well, minus the outside thing). There's a Rick Steve's tour that came in last night and today. What are Rick's hints for drying wet socks?

Enough of the chit chat. I've got more Carrefour Européen du Patchwork photos from September 13, this time most of them from Libby Lehman's "Watch Your Step" exhibit in Exposition #4, Sainte-Marie-aux-Mines.  Remember, these are photos of a quilt show, not perfect photos of quilts. 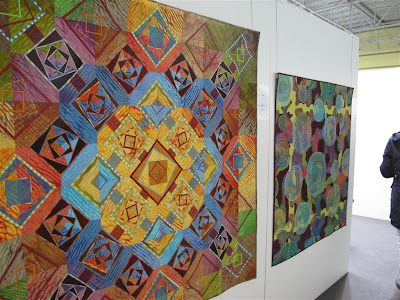 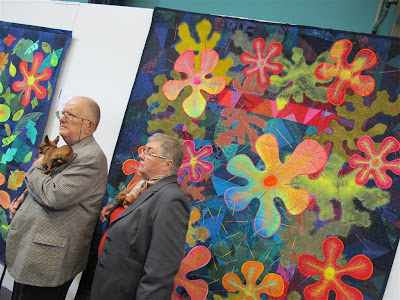 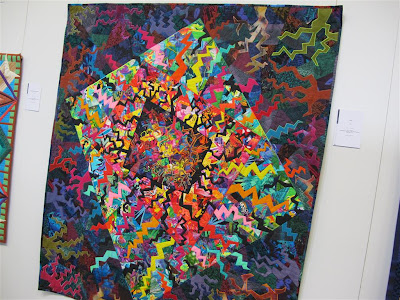 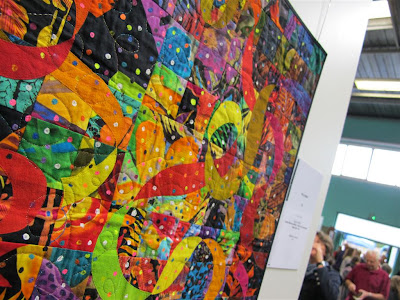 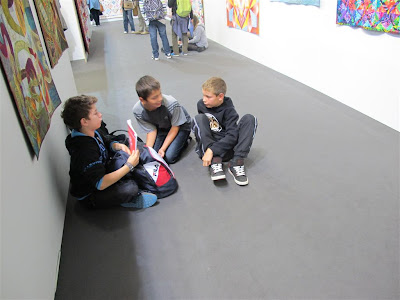 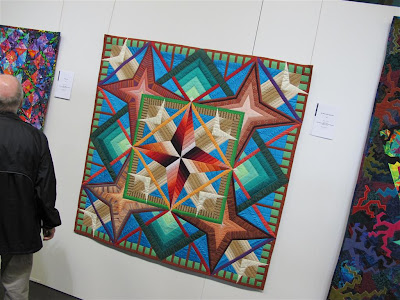 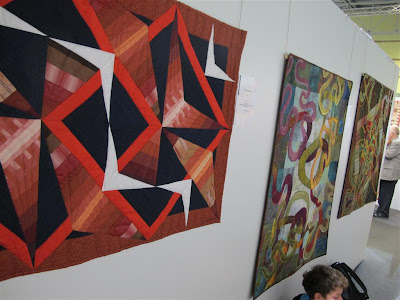 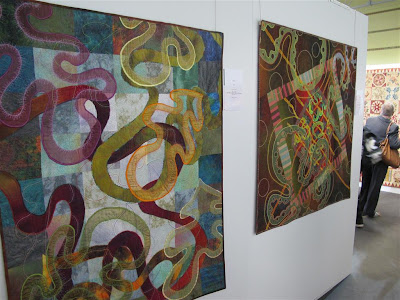 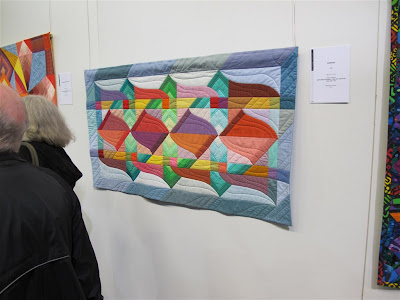 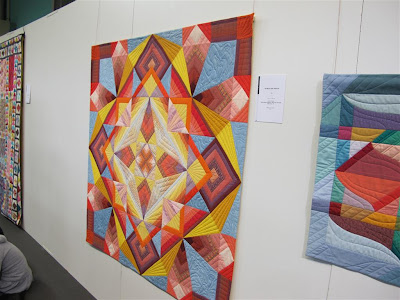 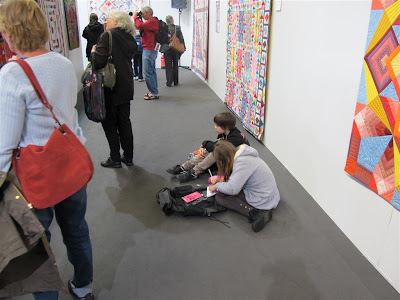 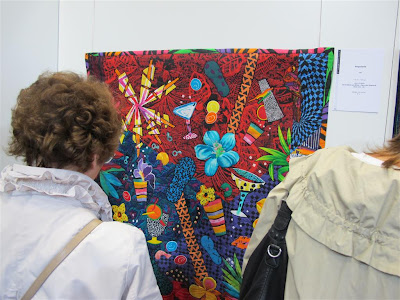 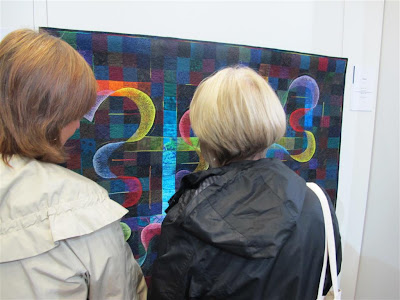 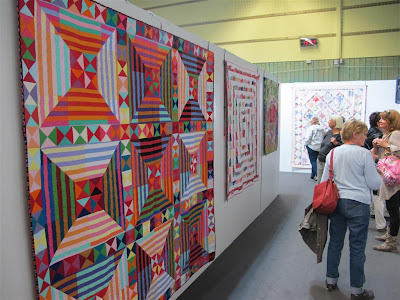 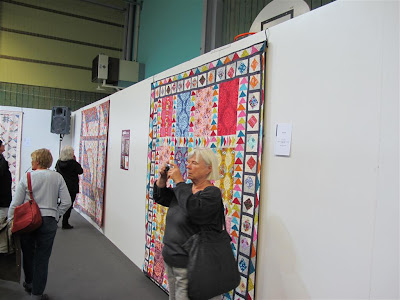 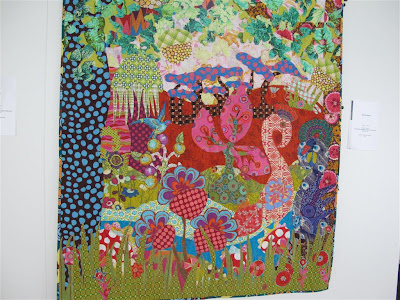 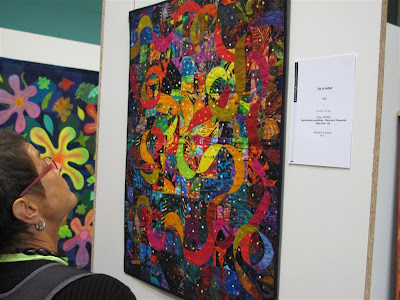 Next time, I should be back on home soil.