Sitting on the BART station platform at 2:10 p.m. in Pleasant Hill, California, waiting for the train to the airport. A 5-car train in 5 minutes is announced. By the time there are only 3 minutes left, it has morphed into a 10-car train to SFO. 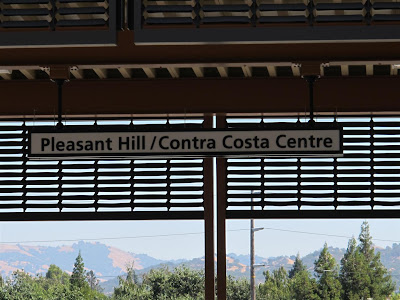 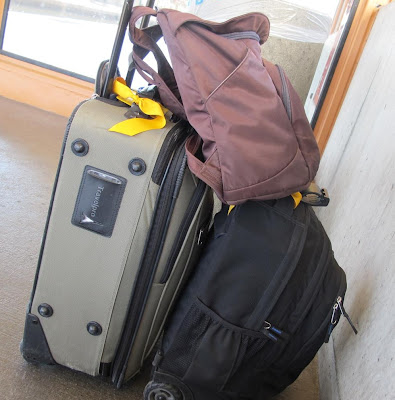 It's the start of a journey involving three airports, two planes, two trains, one bus and one final walk that will take me to a Strasbourg, France hotel.

This journey really started in 1999 when I went on my once-in-a-lifetime Scrap Basket Tour to France with quilter Jeanne Mills. I was sucked in by her little advertising bookmark with a silhouette of the Eiffel Tower on it that I picked up at Asilomar while attending an Empty Spools seminar (quilters), another once-in-a-lifetime extravagance.

Appetite stimulated, neither of those turned out to be just once-in-a-lifetime.

At first I traveled to Paris by cheapest airfare, until I discovered that the vagaries of delayed flights and missed connections to Paris can really mess with a plan. It's rare now that I don't take Air France's nonstop from San Francisco to Paris-Charles-de-Gaulle. I can still try to time the best price on fares.

It took a long time to build up to an Awards ticket to travel from North America to France. Miles don't accumulate very fast on the cheapest fares. 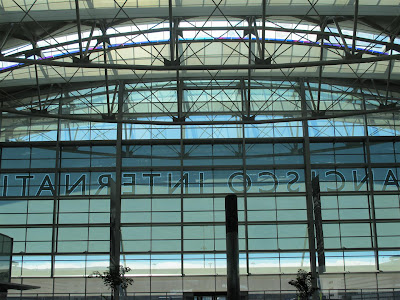 Tuesday afternoon I plunked myself into a Premium Economy window seat, surrounded by lots of leg room, space on the armrest for elbows for both seats, a seat-reclining scheme that doesn't intrude into any one's lap, and a slightly larger video screen and on-demand movie choices. Not quite as luxe as Business Class, but enough to make me never to want to fly Sardine Class again. Oh, and a tray-table more than twice as large as the regular-old-tray-table.

When I arrived at my seat, a woman was kneeling in the aisle seat next to me, speaking to her husband a row behind on a center aisle seat. She tells me she doesn't know how they got separated; maybe because they booked at the last minute?

(Tough titties, I think. I'm not giving my window seat to her husband. I booked in November for this trip.)

Eventually, the man who'd been sitting next to her husband appeared in her seat next to me. (Sorry if I don't feel guilty.)

We departed San Francisco with a fully loaded 777-200 at 6:35 p.m. It makes such sense to sleep on an overnight flight, but with my normal night-owl habits, we were nearly eight hours into a 9 hr, 45 minute flight at my body's normal bedtime, and by then they were serving an enormous breakfast, enough to also count as lunch. Furthermore, I found two movies I've wanted to see but will never find in the Little City Down the Hill: The Best Exotic Marigold Hotel and Salmon Fishing in the Yemen. (Cute young fella, that Ewan McGregor.)

It seems like I build something into every trip that's going to cause me anxiety and I did it on this one, too. It didn't seem like a problem at the time. At the time I booked, I believe the flight I chose from San Francisco to Paris was the only one on which the award ticket was offered, but I had a couple of choices to get to Strasbourg from Paris -- one which left 50 minutes after arrival in Paris and one which left 3:50 after arrival.

Fifty minutes can be barely be done with no hitches, as it's long hike, or possible bus ride, from International Arrivals to Domestic Departures, plus an additional security screening is required.

No big choice there. Except that the second flight departed from Orly airport instead of Charles de Gaulle. In the decision at the moment of booking, that didn't seem like such a big deal.

It was later when I was talking to someone at Air France that I found out I would have to pick up my baggage at CDG and take it with me to recheck it at Orly. Okay. That sounded doable as well.

I bought a ticket online for the Air France bus to transfer from CDG to Orly.

Our plane arrived at CDG so on time. Construction is underway at the airport (I think always) and it was a long hike and moving sidewalk journey (through the new terminal where the passenger waiting chairs are deluxe recliners) to the luggage pick-up. I even stopped at les toilettes.

The luggage carousel moved not. I waited as least 45 minutes ate into my 3:50. My bag had a priority sticker, so it was among the first out -- the last of the first out. There is one exit from the area for all the carousels, another hike.

Construction occupied the area where the online map showed the bus pickup. "Information" helped me find the way. The sign said the trip to Orly was 1½ hours away, with buses running approximately every half hour. I must have just missed one. Then there was the stop at another terminal at CDG, with the bus filling with people buying their tickets on the spot. (I did save a wee bit of money buying online.)

An Air France flight attendant now sitting next to me was reassuring. No problem, she said, as long as traffic is light en route to Orly. Okay. That sounded doable.

But, after a fast start, traffic developed.


Cut to the chase. I made it with ample time, once I found where to go inside the airport. (Plopping right into the middle of an unfamiliar airport can be so bewildering.) There weren't many passengers on the long skinny plane (CRJ 1000), and I dozed, to be awakened for my two-cookie snack, my final food for the day.


I bought a ticket for the train into Strasbourg from the tobacco shop at the airport and made it to town, walking to the hotel just fine and arriving at 8 p.m. local time.

I crashed for the night and today I'm relaxing  with my extra pretrip day built in before everyone arrives for a greeting get together tonight.