I try to kid myself out of jet lag coming home by saying that we arrive back in San Francisco only 1½ hours after leaving Paris (left at 2:30 p.m, arrived at 4:00 p.m.). So if I go to bed by midnight on the day I get home, no big deal. By that time, my brain is too confused to do the calculations, but let's face it, midnight in San Francisco is 9 a.m. in Paris, and I've been up for 26½ hours. Not withstanding that, I wake up at 3:30 a.m., feeling like it's time to get up. I fiddle some, try to get back to sleep, but it's not really working. It's midday in Paris and my body still thinks so.

After eating breakfast (hungry . . . I forgot to eat dinner), I took the time to post all my handwritten notes from the flight before heading for home.

First stop, the drug store. I used the very very last iota of my make-up, which allegedly covers up dark circles and splotchiness, for the flight home so it needed to be replaced. 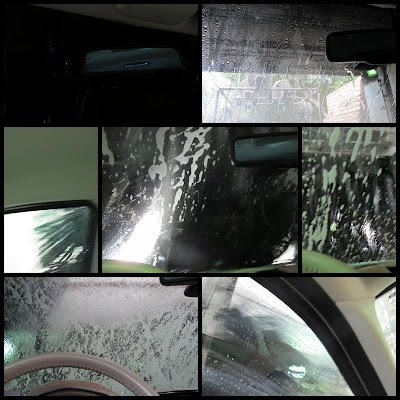 Stopped for lunch at fast food. I didn't have any hamburgers in France because they are all cheeseburgers -- the concept of ordering without cheese probably wouldn't go over well -- and they were HUGE, way too much for me to eat.

Here's the "with cheese" sandwich order "without cheese." It didn't taste as fabulous I'd expected; I think the patty had been waiting on a warmer for someone to order "no cheese." 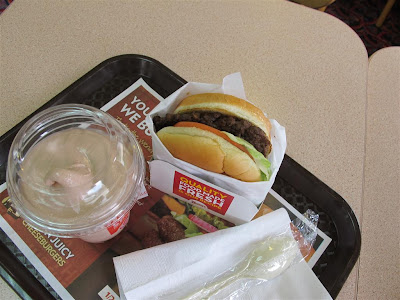 Next was a stop at Costco. I had neglected to make a list before I left home, so a few guesstimates have resulted in duplications of stuff on hand, and I've thought of at least one thing I should have gotten. Of course, I never buy just what I thought I went in for.

It was a warm muggy day at Costco, but with gorgeous clouds in the sky. 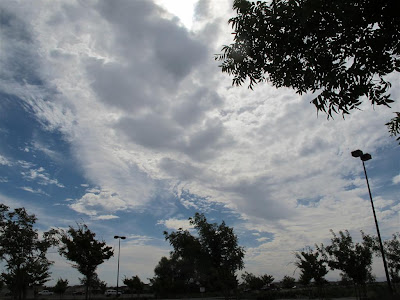 I stopped Sister's Mountain House to pick up a vital item she'd forgotten when she and Brother-in-Law left on a Morgan outing, so I could mail it to her at her City House to be there on their return. And the new stairs leading down the the lower part of the backyard were completed. I've since learned that neither of them has seen the completed steps, so here they are, guys. I think they look great. 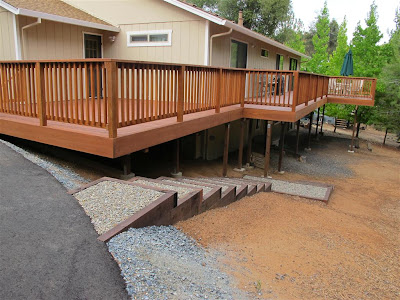 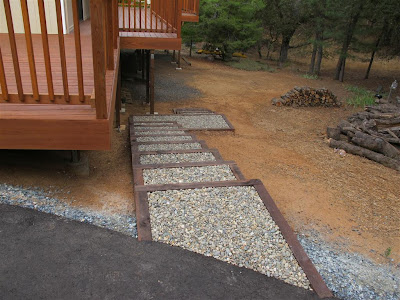 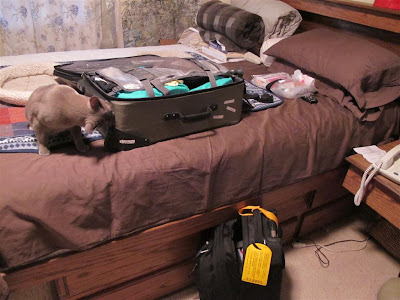 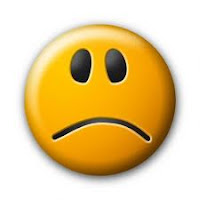 . . . a little clean-up to do, a slightly trickier chore than cleaning up a barfed-up fur ball from the carpet. 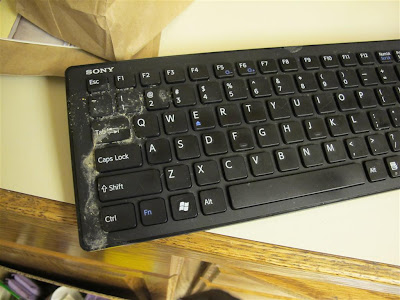 On Monday, I got my new tooth, the implant. To tell the truth, I haven't even looked at it yet. I'm relearning how to chew with more than one pair of meeting molars, which is very strange.

Email ThisBlogThis!Share to TwitterShare to FacebookShare to Pinterest
Labels: Home