Last night, a major lost item had been found, but in the end, I left you with this:


Now, they can get to work on these items, still missing:
I added a third missing item to my personal list after this was posted, my box of No Jet Lag, the self-same (or its clone) box that had caused me to be practically strip-searched at the airport last year. I'd  seen it recently, but I hadn't come across it while I was looking for the geeky neck dangle thingy, and that was a very thorough search.

And, as the day went by, the kittens had been missing for a day-and-a-half to two days. Extra, the between-aged kitten, whom Mama Cat (Sox) had been running off, began to enjoy frolicking on the deck, and having access to the food without lurking and sneaking. Mama Cat came around to eat without her little ones.

Today I've been doing the tedious part of packing: all the miscellaneous stuff, trying to eliminate every ounce of weight I can leave behind. I'll be doing lots of luggage hauling, as I have to change airports in Paris and I've been told I will have to claim my checked bag and traipse it by bus to the next airport, checking it again for the balance of the trip. Once I've arrived at my destination airport, I'll take a train to the city, then hoof it to the hotel.

This tedious stuff involves sifting through the boxes in the corner of the closet (once again), and eliminating many of the "must haves" from my purse and transfer what's left to a smaller, lighter purse I bought yesterday which will also fit inside my backpack.  But then . . .


I truly thought this was gone forever, into the dark maw under the seats on KLM. So this was a really exciting find. The tiny purse that holds my lipstick and miniature hairbrush was too heavy with several lipsticks. One should be adequate. I opened it and the toothpick holder rolled out with the lipsticks. Have I not applied lipstick since June 17? I guess not, at least not any from my purse.

Nothing rattled with coins. I shook all the security pouches I ever use. You know ... those things you put your excess money and spare credit cards in and conceal somewhere under your clothing. I have a really secure waist one with a steel cable (or something similarly strong) through the belt, but that rigidity tends to make it pop out of my clothing unbeknownst, rather defeating the concealment issue. I also feel I must take it on and off for passing through airport security, a pain in the patootie. It's got a tiny pocket in it, no wider than a Paris Metro ticket, which I found there. Shoved to the bottom of the tiny pocket, under the Metro tickets, I eventually pulled out the three euros. 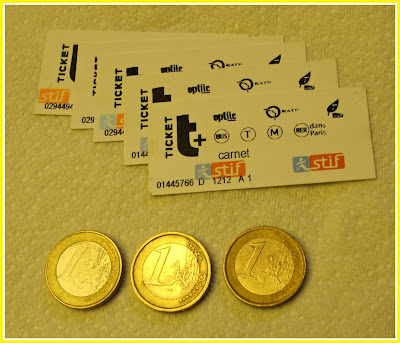 When it came to the No Jet Lag, which was not in the pockets of anything I'd worn for the last few trips, I finally learned my lesson and looked in a drawer I'd have no reason to put it in, the dresser drawer with all my logo T-shirts. It was there, standing up against the drawer front so it wouldn't be obvious.

As I sat down to write this, Jean-Luc was going crazy watching Extra bound around the deck, tossing some bit of something in the air in boisterous play. Then I heard crunching and Extra was chowing down, carefree. Moments later, a cat jumped up on the screen, and there was Sox. When she dropped down to the deck, I was surprised to see the smaller face next to her. Had she and Extra made friends? Then I saw another tiny tail bouncing around and there were the two kittens. Even though packing is not done, all known lost objects (and kittens) are currently found and I am a happy packer. I'd have taken their picture, but my camera focuses on the screen, rather obscuring what's outside.

Who knew I'd write again today, and who knows when I'll be able to again?!