*Dizzy. Describes how I felt all morning. Two full cups of good strong French coffee (usually forsworn before a day out touristing)? Or so many buttery croissants the arteries of my brain are clogged?

Saturday. At the airport: First let's say I witnessed a disaster of sorts that I sure hope I never have to handle.

I took a shared Parishuttle (not to be confused with Paris-Shuttle) from my Paris hotel to the Paris airport, the one that's Charles-de-Gaulle in contrast to the smaller Orly. (You would know that Le Grand Charles would have the big airport named for him.)

There was one couple aboard the shuttle when I got on, headed for Atlanta on Air France. We stopped next to pick up another couple taking American Airlines to Boston, who joined me in the rear seat. A mother and daughter, also en route to Atlanta got on, I believe, at that same stop. They took the front seats, then worried a briefcase had been left in the hotel lobby which the daughter went back to check on.  Not there, so they assumed it was on the van. (You can hear it coming now.)

The American Airlines people got off at Terminal 2A, while the rest of us headed for 2E. We unloaded and went to the back of the van for our bags.

Not only no briefcase, no bags at all for the mother/daughter team. They decided their bags must have been loaded on another shuttle. When I left, they were oh-my-godding. I'm sure I'd have been doing the same and I don't know the outcome of their dilemma.

It's a habit. I always watch the loading of my bags. I suspect they'd left that laborious job to the hotel staff. Teachable moment, as they call it.


Naturally, the shuttle drop-off point is at the far end of the terminal. I learned a few trips ago that you don't wander up to just any of the dozen or so rows of Air France counters. You must look on the big board for your flight's embarkment counter. Mine said #4, so I trekked almost to the opposite end of the terminal.

What a zoo! The occasional self-check-in kiosk had been replaced by a roomful of them with people queued up everywhere. I'd printed my boarding pass yesterday at the hotel. I found a live person at what appeared to be an entry point.

Okay. Glad I had preprinted my boarding pass, or I wouldn't have found this out. A little walk back to #6 and I find that Premium Voyageur (my Awards ticket class) is also accepted in the Business Class line. It's a serene embarkment area, with people pointing me through to an unbusy desk.

Then it's straight on through passport control and security.  "They," the European airlines, don't give you any little sitting area before going through security, where you might want to collect all your items that will set off alarms into something that will go through on the belt and get otherwise prepared.

So I set off the alarm something like four times while I shed my money belt (coins) and cell phone and my sandals and I still beep because of the decorative metal circles on the waistband of my favorite travel pants. I have at least five trays going through the scanner. I get another pat down. (Hey, airport security has provided my most intimate encounters in the past couple of years. It would be a lot more fun if they had some cute guys doing pat downs.)

Since they want you at the airport three hours before the flight, I'm sitting in a quiet Sky Priority waiting area at gate L48. I saw our aircraft arrive awhile ago. It discharged its passengers and is being cleaned and restocked.

Saturday. Aboard AF 0080.  Two-hours-twenty-two minutes left to go in a 10½ hour flight. We're cruising at 538 mph at 38,000 feet, zigging between Edmonton and Calgary. Minus 72 degrees outside. Fall, if not winter, has come to fields below. The air is a hazy brown below us and has been, whenever I've peeked, since somewhere this side of Iceland.

Getting aboard as Sky Priority was a pleasure. I told you I thought I was getting spoiled!    What shall do? Become Traveling Sardine Class: Upgraded? I was first to arrive in my section, with unimpeded access to the overhead. I've consumed the contents of most of my pill pouches, so my carry on bag weighs a lot less for hoisting it up there.

The flight is not completely full. Apparently some of those in my little section got offered upgrades at the airport.

We were delayed in leaving by some sort of something locked. Or that's what I gleaned from a rapid-fire spiel in French followed by a rapid-fire spiel in the same cadence in French-accented English that was indistinguishable from the former. A couple of announcements later, I believe I heard the word "gangway."

Here's my theory. The thing we walk through to get on the plane is locked to the plane so passengers won't be randomly dropped on the tarmac. The lock got stuck and was fixed by the guy who drove away in something golf cart-like and had a very engineerish appearance.

Next came that vertigo inducing feeling when the pavement appears to be slipping away in front of you.


It was wild out there on the runway and taxiways. Planes were racing for their places in line and taking off quickly. 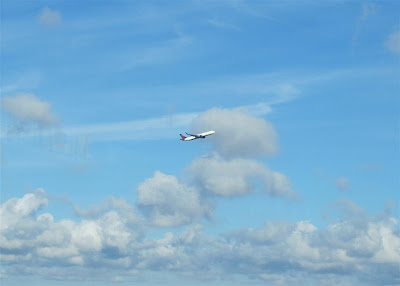 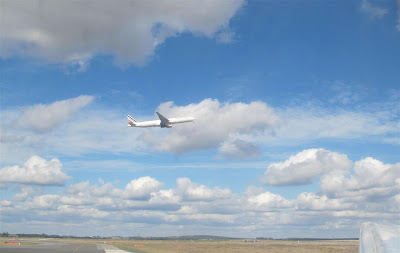 I think this was an Airbus A380 ahead of us. Awesome! 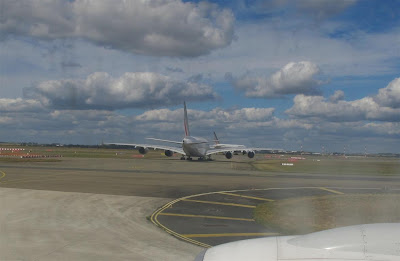 We're in a Boeing 777-200. As far as I can tell, on this model the Premium Economy seats are located in a stretch section just forward of the wing, It's a smaller plane than the 747 Air France uses for many of its overseas flight. Sardine class is really sardine class, with really narrow aisles.

Not everything is peaches and cream here in our little Shangri-La. Sardine class has toilets in the rear of the plane. There are toilets on either side at the back of Business class and the purser has designated one of these as "ours." On the other side of the plane. Access is over the feet of people sitting at the bulkhead. There is nothing to hang on to to steady yourself as you attempt to cross over.

I can't say I blame the bulkhead passenger for being less than happy with this situation, but it was hours into the flight before I made my first foray on the heels of my seatmate so we wouldn't have to disturb them separately, yet I got such a giant eye-roll from the Dragon Lady La Gardienne in the first  seat that I'm pretty much intimidated out of peeing.

My entertainment system is misbehaving as well. (It did very nicely on the way over.)  I got about 20 minutes into a French film, Adieu Berthe, which went in fits and starts before becoming "disponible" (not available).  Then I tried Sleepless in Seattle, with the same results. I tried Thermae Romae, the story of a Roman architect who has fallen out of favor as too old-fashioned to design the next Roman Baths. He is sucked through a drain in the current bath, into the future in a Japanese bath, where he discovers wondrous modern design. He is reawakened from "drowning" back in Rome and next thing you see is his being celebrated for building baths on the Japanese model.

At which point, what with the Romans speaking Japanese with English subtitles, I didn't care what happened next. I doubt I made it to the 20 minute mark.

Thank you, Captain Dave, for getting me through turbulence over Canada with nary a skipped heartbeat.

We were a little late landing, so I am told, which didn't matter to me. I took BART and a cab to Sister's House in the City for a fine greeting from cats, especially Bentley. 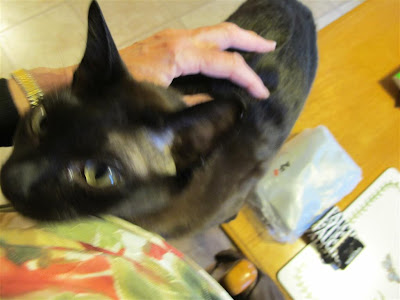 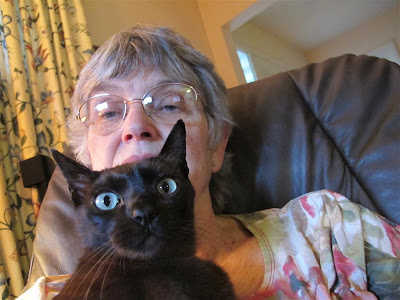