Thursdays Out and I've still got that peaceful easy feelin'

296
It's nice to be basking -- still -- in the afterglow of a Peaceful Easy Feelin', a week after the local Eagles tribute concert. Even though it's the first of the month and bill-paying time, even though my stupid back is still all tetchy about its workout with the vacuum cleaner, even though I had to fast one night this week and get up at the crack of dawn to get blood drawn, even though I hear cat barfing noises right under the table I'm sitting at.  Still singin' . . . I have a mighty list of appointments set up for next week. Still singin' . . .

The plus side of those fasting lab appointments is that afterwards I treat myself to breakfast out and allow myself to splurge totally on dietary restrictions. Coffee. Lots of coffee. (Coffee out is much weaker than I make for myself so it takes more to achieve the same buzz.) I don't like to eat fresh blueberries. I don't like blueberry pie. They're too cloying sweet. But cook them into a pancake, or a blueberry muffin without much added sugar, and I love them.

So I ordered the fruity pancake breakfast which is described as two pancakes topped with strawberries, blueberries or I-can't-remember-what, topped with whipped cream, egg cooked to choice, bacon or sausage. . . . I think that's it. I asked for my blueberries to be cooked into the pancakes and the bacon to be cremated. The egg? Medium over? That can change according to mood. I leave there stuffed (when this happens about twice a year), so friends and family have suggested that I just ask for one pancake. I tried that. It became too complicated, so I went with the whole thing. Even the whipped cream on top.

The cook used lots of blueberries. So this is a very healthy meal and lunch was not required for the day. I can't believe I didn't think to take its picture!

Toward the end of Wednesday, after a grueling day of bill-paying, Sister called to see whether I wanted to go out to Mexican for dinner with her and Brother-in-Law. My leftover mac and cheese would hold another day, so of course I wanted to go. 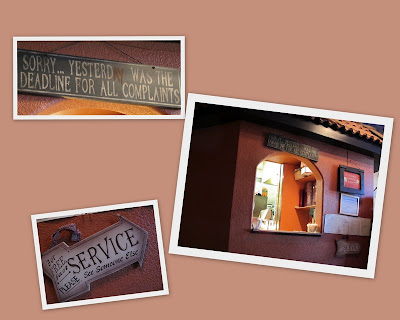 Again, I forgot to snap a photo of my ½ Compuesta with pork, hold the guacamole (or actually, put in on the side for Sister).

Sister is also participating in the Photo A Day Challenge and hadn't yet taken her theme photo for the day, "Outside," so after dinner we went in search of a subject. There was no pretty sunset available, but I knew the full moon was scheduled. We couldn't see any signs of the moon in the still-light skies at around 8 p.m., but I suggested we drive to the beach at the lake where I'd gotten such good Supermoon pictures, on the theory that full moons appear at roughly the same time in the same neighborhood.

As we entered the parking lot, a pale moon began to peak above what looked like a smoky or hazy horizon. The setting sun still cast its light on the farthest hills. 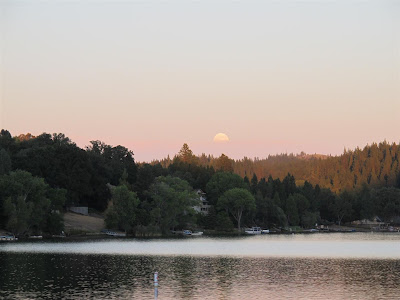 Kayakers and rubber rafters are heading back across the lake to the marina. 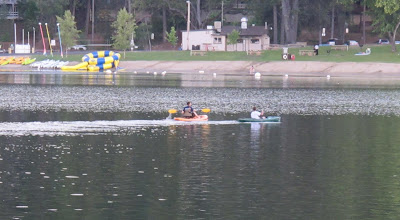 The moon is fully revealed. I'm thrilled that my theory about full moonrises played out. I think the moon is a bit farther north and a bit earlier than Supermoon, but close enough to have hit the right time and place. 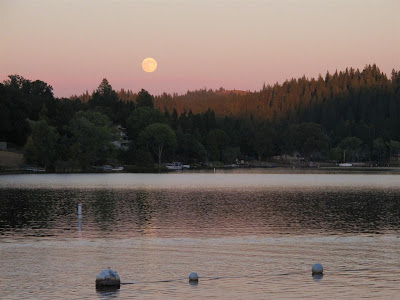 Grandmas are watching; kids are being called in from swimming; Hobie's have been beached. 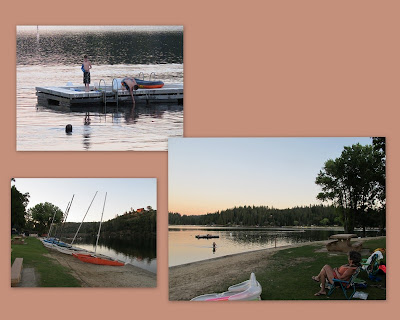 There's a mystery about this place that appeared in the paper on this Wednesday evening: a body had been found in the lake near the swim float on Tuesday morning. Thursday night the paper reported that the person -- a visitor -- had been identified and drowning appeared to be accidental. That's not something to sing about.

We take a final picture, with the moon's reflection glowing in the pink-tinged water, and head back to Sister and Brother-in-Law's for strawberry shortcake. (More red fruity goodness. Health food.) And (sigh) I still had brain freeze about food pictures. 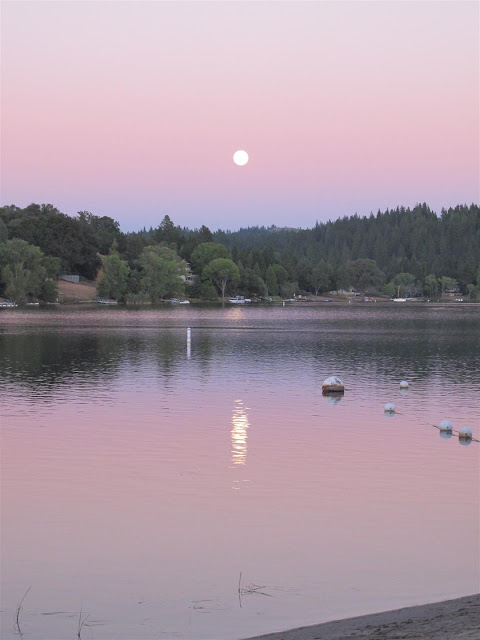 I did get to see Sister and BIL's work of the day. They had created and installed a mini-lift and storage location for the truck bed cover in the Grand Garage. I've helped them wrestle that sucker off the truck. It's heavy and just the kind of thing Sister and I are likely to drop on a foot or bark a shin with -- something neither of us need -- or worse, injure the truck. 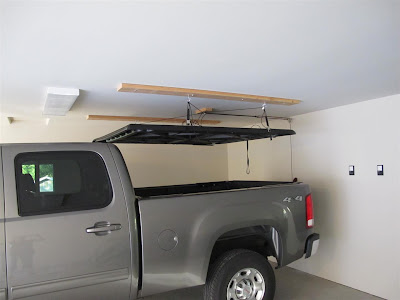 Thursdays Out at NeedleCrafts featured lots of newly completed afghans, this despite some really hot weather that wouldn't inspire me to hold a bunch of woolly stuff on my lap. The holders are not necessarily the makers. I lost track of which was whose. 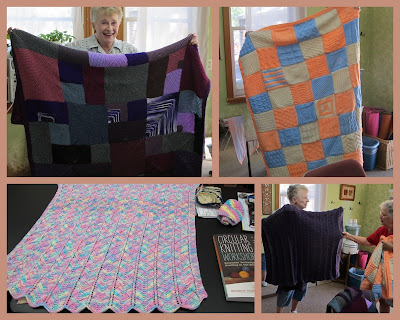 You night have noticed a lot of red being worn this day at NeedleCrafts. One day we were chit-chatting and decided that we would dress color-coordinated on the first Thursday of each month. This week was red. Not everyone got the word, even though I sent out an email the evening before. Can you believe that some people don't have their email turned on full time and might not have seen the notice?


That little red spot on Barbara's head?  It's really a fascinator, as seen in a photo taken by Sister. 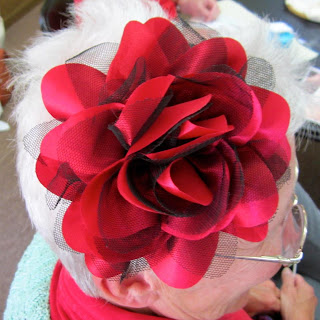 Terri is making Christmas cards, which are popular items in our little town, available at the Fall festivals. 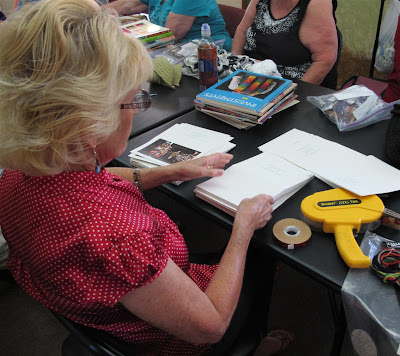 Sister is taking a stab at some needlework. She's somewhat dubious about this . . . 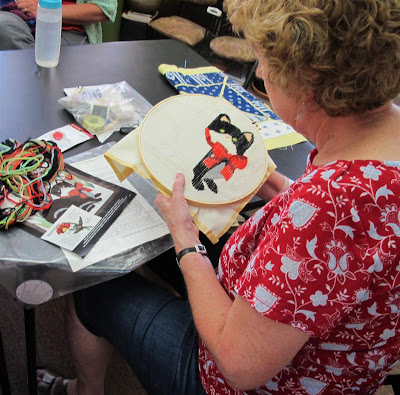 It's my blog so I'm showing that I've completed my second blue and white block, made with my French fabric acquisitions. 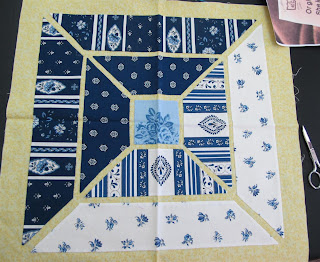 Brian Williams on NBC News just showed nail art at the Olympics. In a remarkable coincidence, the next photo to come up in this queue is also nail art:


The little kitten had been missing for about a day and a half, so I was happy to see him/her this stretched out on the deck, pressing its back along my most certainly cooler slider door. It's always alert, this little one, for threats, particularly large dogs who charge it ("she won't hurt them". . .  tell the little kitty that a charging dog whose head is bigger than the kitty's body doesn't have ill-intent). The ferals have such a wariness, but this little one is beginning to recognize that the shadowy figure it sees through the window is its source of food. S/he was sooo hungry the first thing in the morning after the disappearance, then Sox, who is probably a sister of some degree, ran it off and it hid over behind the BBQ until Sox finally meandered off. I think Mama cat, whom I haven't seen for ages now, tossed it out and abandoned it here, and its sister doesn't like it either. It jumps around out on the deck, playing with a scrap or paper or an old bungy cord, amusing itself without companionhip. Poor little kitten. 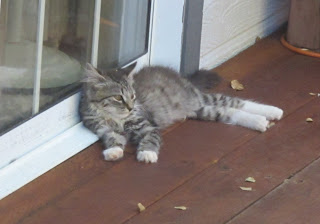 IN BREAKING NEWS, even as I was writing this, I witnessed this: Two little fawns and their Mom found the crackers I tossed on the compost pile: 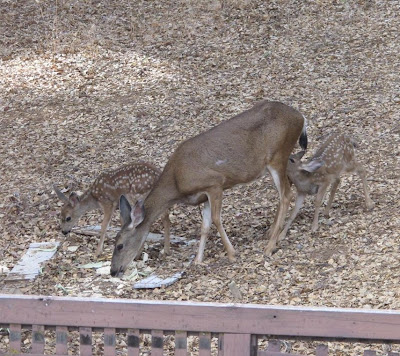 And Henley yawned while I took pictures over his head: