I need to be quick, not much on editing. We -- sister and I -- think I will be able to get packed between now and the day I leave on the next trip, even with a break Sunday for hamburgers at the local historical society's fund-raiser BBQ. I must be judicious with blogging time.

Regular life proceeds apace, with Thursdays Out and NeedleCrafts, Soroptomist, including publishing a newsletter, before I'm out of here.

A day of anger > elation > devastation. Hard to get through the roller coaster Saturday, starting at one a.m. Growling, clattering, scritching on the deck. I look out and there are three raccoons in the cats' food bowl. I open the door and yell at them. Unimpressed. They're pissed with each other and pissed with me and lots of noise and banging and crashing about leaves them  . . . still there. I finally run them down the steps, 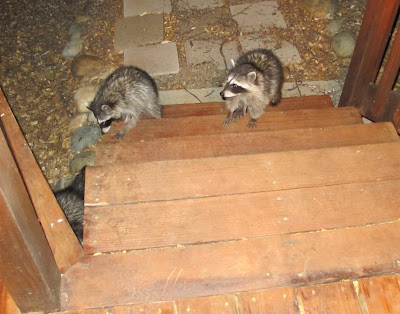 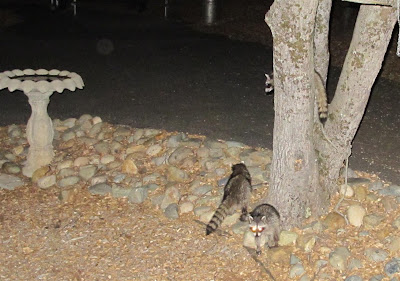 I chase them up the tree, and this is repeated several times.

They finally saunter off behind the neighbor's house, 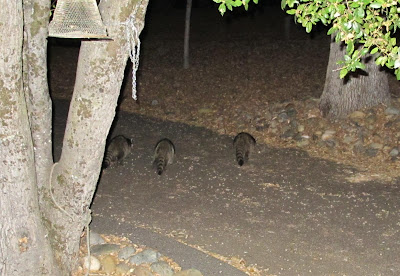 but leave evidence of having returned later in the night. Frankly, they were aggressive and scary, leaving me revved up as I tried to go to sleep.


Kittens and mama frolic on the deck once daylight comes, coming out from under the table cover which I've left for them as a hiding place. 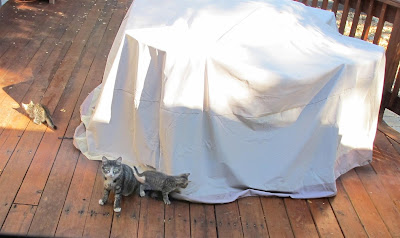 or relax for a snack. 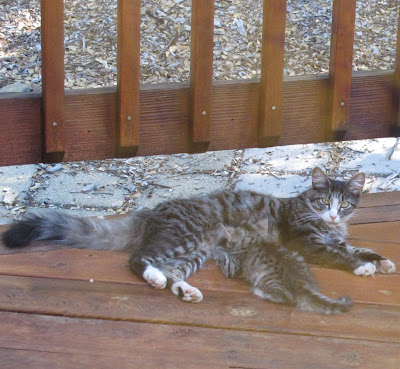 This is the big day when the plumbers come to install the rest of the new plumbing fixtures I've ordered. A new toilet was installed a few days earlier (taller, quieter, more water efficient). It all began with a wobbly kitchen faucet which couldn't be tightened down. Here is why: 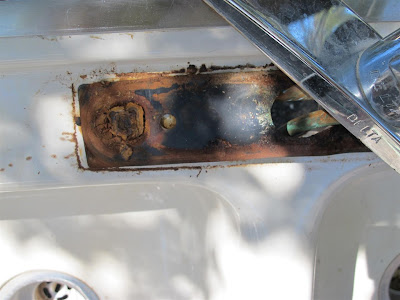 The sink itself was also nicked and starting to rust, so let's go for faucet and sink. Jean-Luc watches the plumber under the sink. 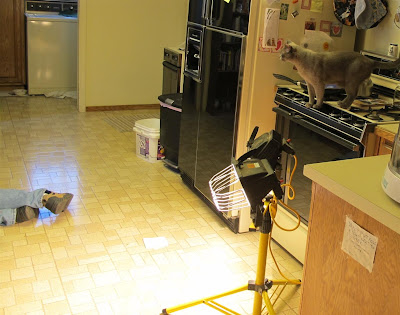 Henley inspects the new one on its way in. 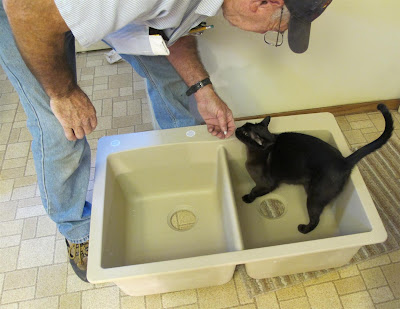 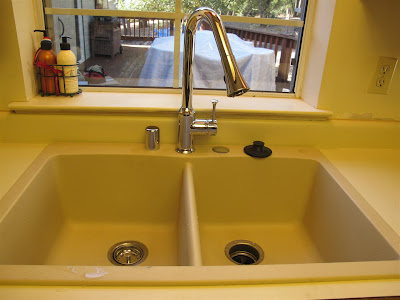 By the way, my bathroom sink is in rough shape, too. It looked bad from the bowl side. My impression is confirmed from the outside. 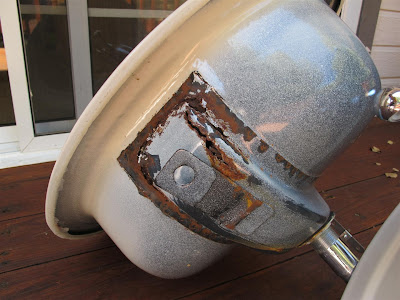 It's one of a pair in my master bath, so changing one means changing two. While we're at it, we should make the hall bathroom match, and it is starting to rust just a bit, too. Here's one of the three new ones. 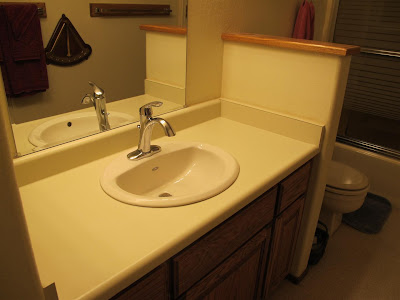 So happy to have it done and to get back to working on my newsletter . . . .

It was 9-ish in the evening, dark out but for the pool of porch light, when I heard noise on the deck, my first thought being the raccoons. But I soon recognized the banging and scritching of the big dog's claws against wood, racing around the covered table, kittens all diving for shelter. I ran out shrieking at it, as it usually runs away when that happens, but it just kept circling and probing the canvas. The dog ran off the deck, then back under it circling, me still screaming, the dog running, stopping, circling and the fact dawning on me that it had a kitten, and my screams intended to scare it off turned to screams of anger, anguish, horror, despair.

The kitten was found dying in the driveway, the dog that I suspect, alibied. I posted intemperate words on Facebook regarding my opinion of dogs. My history with them has not endeared them to me. A good day turned so bad.

Two days later, a temporary barricade is up, 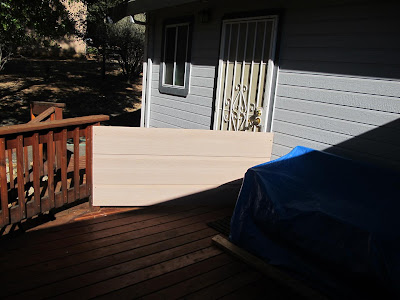 and I head down the hill to the little city to see the dentist and to do what I hope is the last shopping run before my trip. I get my teeth cleaned, then am able to get an appointment for 45 minutes later to get the impressions done for my tooth implant. My gum and graft have been healing for months and are ready for the crown, or whatever they call it. The production will take a couple of weeks, so doing the impression now means it will be ready when I get back from the trip.

During my 45 minutes, I picked up these lovely veggies that a quilting friend is giving away to her friends. I had the veggies with my own version of pork fried rice. 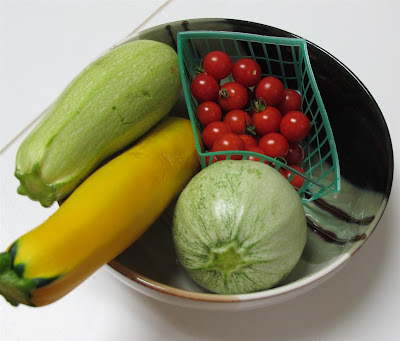 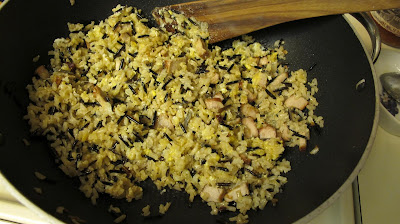 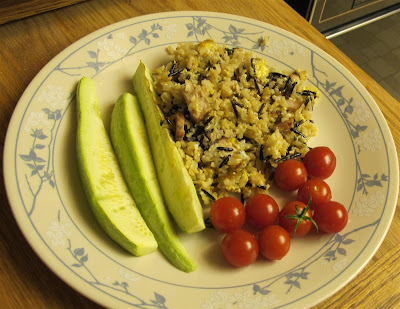 My little feral kitty family relaxed this morning, feeling a little safer behind the barricade. 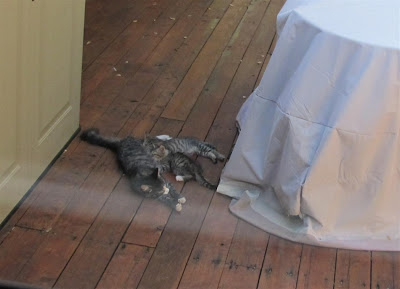 There's one little guy who I think is a younger sibling of the mama cat but who got run out or abandoned before the three little kittens were presented to me. Mama cat keeps running it off and I find its sweet little face peering in the kitchen window and I try to sneak food out without mama hearing it. Just to keep cats straight, I call it Extra. Early this evening, I heard a big bang on the deck. I looked out the back door, on the outer side of the barricade. This guy was standing on the ramp looking in. 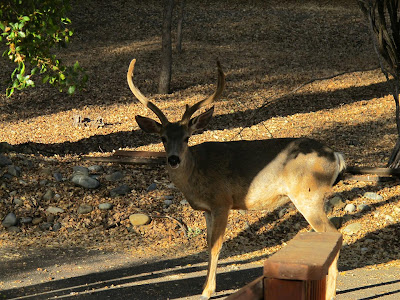 See you sooner or later!