When you hear the sound of fire bombers . . .

I know -- odd title -- but "fire bomber" is what I mentally called air support for wildland firefighting until I Googled it as I sat down to write this, in search of a less alarming and proper description. But all that comes later in the Wednesday/Thursday events.  Weird Wednesday started with: 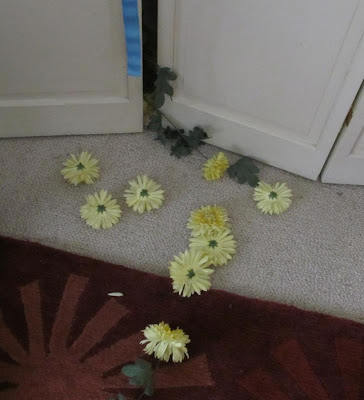 Kitties, whose names I won't mention (yes, I will -- Henley and Jean-Luc), wiggled through closed doors, climbed up on the closet shelf, and knocked off a basket of artificial flowers.

I believe the first part of the misbehavior occurred on or about July 12. When I went to let the kitties out of the kitten room that morning, the closet door was slightly ajar and there was something on the floor inside, impeding the opening of the door. I didn't force it open it at the time, not wanting to deal with the prospective chaos therein.  This Wednesday morning wake-up yielded the beheaded flowers.

Everything in the house is subject to disassembly. Sigh.

The unrepentant Jean-Luc had a doctor's appointment for check-up and kitty shots that day. Jean-Luc is a silent cat.  I seldom hear a meow out of him. (Purring excepted. He purrs well.) As soon as I put him in a carrier and into the car, he began to meow. Not yowls, just meows. All the way to the vet and even into the waiting area. Until a dog came in. It's interesting to know he has a voice. 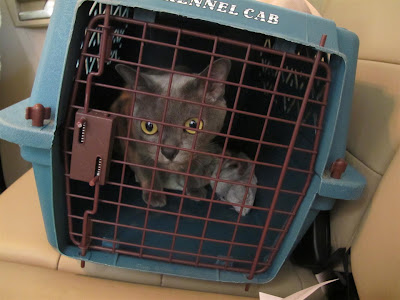 As to the actual exam, he's more into passive resistance than a fight. "He's making himself look as small as possible," commented the vet. He's completely limp and malleable and weighs a ton. Well, he weighs 9 lb 5 oz, heavier than my son when newborn, and it feels like more in his limp condition. He flinched for the first shot, was impassive for the second. He was pronounced in good health and poured back into the carrier.

He was a bit subdued for the rest of the day and spent a long time engrossed in watching "Bears of the Last Frontier: Arctic Wilderness" on PBS that evening.

At some time during the day, I heard the little pump on the Drinkwell Platinum Automatic Waterer grumbling, a symptom that the water level is getting too low. I refilled the tank and went about my business.

Later in the day I waded into a puddle of water spreading from the half-bath into the laundry room. The Drinkwell had pumped the full tank out onto the floor. I unplugged it quickly and threw towels onto the puddle.

I went online and on the phone looking into a replacement Drinkwell, in the worst case scenario. I also read in reviews that clogged filters could cause overflows.

Good news. The grate that covers the return water flow to the pump and filters large particles was clogged with cat hair, so the water entering the drinking bowl could not return to the pump intake.

Bad news. I also checked Facebook and there is a nearby brush fire, more or less northeast of me, apparently on the steep down slope to the river. This is a common summer worry. I went outside to see if I could see smoke, often a tall thick column on a newly-minted fire. There was no smoke visible except for perhaps a white haze over the hill to my northeast.

But I could hear the fire bombers, or more properly, airtankers and helicopters, rumbling close at hand. I hadn't heard them with the TV on and the the house closed up.

Local photographer C. Wilkinson quickly posted what could be seen nearer the incident on Facebook. Here's a screen shot of her photos posted within three hour of the start of the fire. 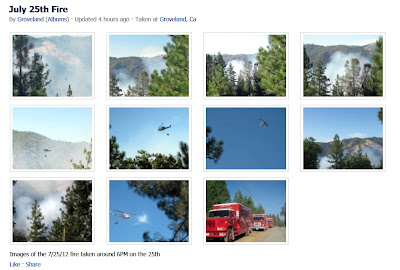 Fire reports from CAL FIRE put it at 100 acres, 5% contained at 8 p.m. The fire is described as "in an inaccessible area and continues to smolder and creep in the brush with a possibility of a roll out, which will involve hand crews taking direct action on the line, with air support for the most difficult terrain."

There still was no smell of smoke, as the wind remained dead-calm. I went to sleep without an immediate sense of threat.


Sister and Brother-in-Law have returned to town from their car-race hopping in Europe (lots of rain) (lots and lots), so I picked up Sister for NeedleCrafts this week. We passed a lot of fire-bound fire vehicles on our way to the Little House. From the yard at the Little House, we could see smoke rising higher today, and we could hear the air attack on the fire well underway for the day, even several miles farther away from the fire than at home. 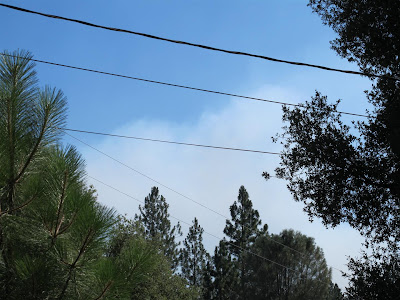 We eventually had 13 at NeedleCrafts. 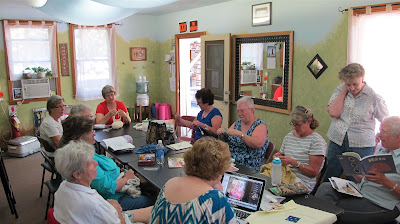 While Sister and BIL were out of town, their house was being spiffied up so it would look as good as BIL's Grand Garage. The deck extension and repairs were complete, and the house was painted and a new roof put on. Some fine-tuning of the deck stain is still being done. 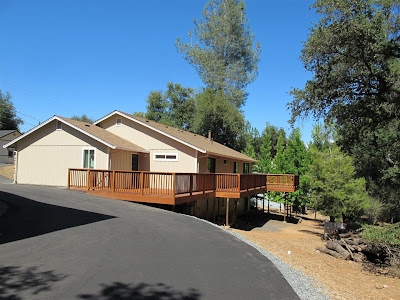 By the time I left their place in the afternoon after dropping Sister off, smoke was more widespread, though still not dense. Winds were light. I just happened to glimpse out my front door about sundown and noticed pinkness through the trees. I ran out to amazing skies. I think these are smoke-made clouds, and what a spectacle. 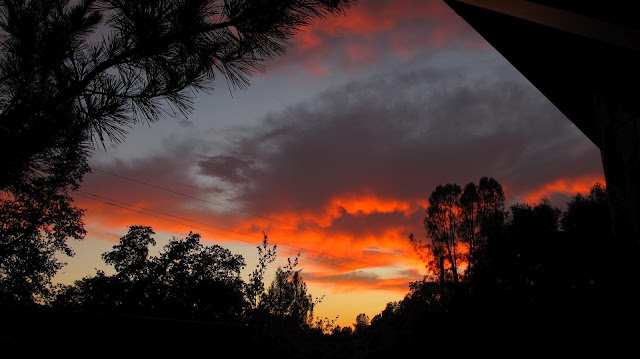 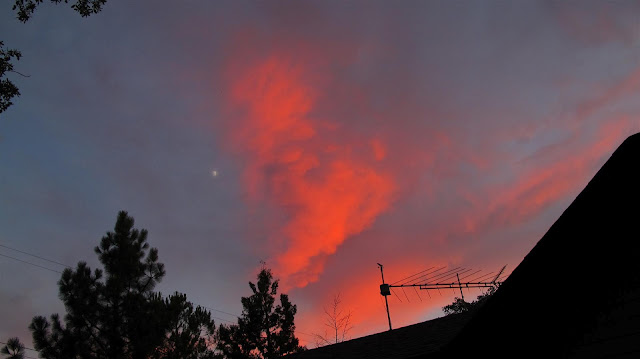 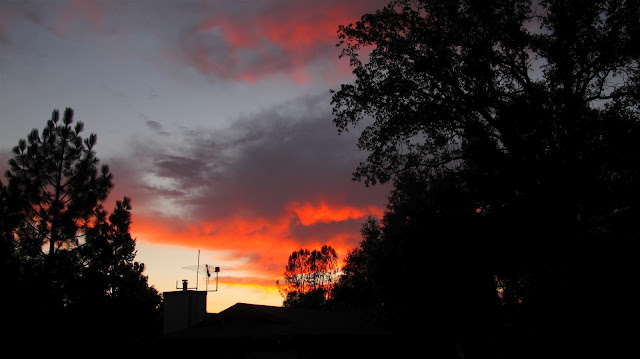 Interesting and unsubstantiated reports and comments have begun appearing on Facebook about the fire. Speculation. Titillating gossip. . If well-sourced information develops, it could appear here later.