Thursdays Out AND Men at Work


It was during that wake-up hour this morning, when I'm letting the Excedrin infuse my body to take the edge off aches and pains, and my brain tries to pull out critical data, such as day of the week and its scheduled activities.

This half-conscious state was interrupted by the rumble of a very big truck. The prospect of Men at Work brought me to full alert. They're back! Let's face it. Not a whole lot of excitement takes place right outside my window. I'm such a voyeur when there are men at work and I can snap pictures of heavy equipment operation.

I remembered then that this is Thursday and it's Thursdays Out -- NeedleCrafts day. Ah, the dilemma. But it's been my one fer-shur activity for 20 years. But I still looked out the living room window behind the TV. There was a truck with big black tubes, or pipes, a foot in diameter, and a crew in orange shirts deploying orange cones to block the end of my street. I would have a couple of hours of fleeting observations before I had to leave.

It's a big deal when a full-size morning van comes into our community. Roads are narrow and steep, and driveways can be worse. Special arrangements are needed to get our security gates open and obstructions removed. Then there is the problem of making the turn from the outside roadway into the complex. These were bigger noises and long trucks with longer trailers and complicated equipment in tow.

It first started a week ago Wednesday. I'd read earlier in the month that my patchwork
street was among closures for roadwork coming up during the month. This must be the thing. It was a horribly busy week, working on the Soroptimist newsletter and fighting with Microsoft Word, which so often just balks at doing what I have in mind. Men at Work would leaven the day as I struggled toward my internal deadline.

Work started with a cutting machine carving out a rectangle at the foot of my street, then filling it with asphalt. 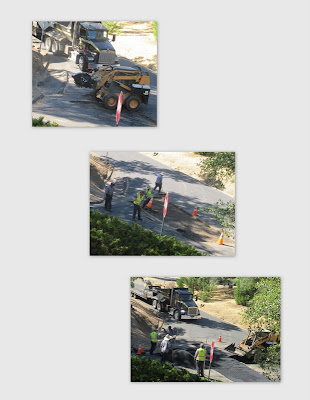 They were very big on rolling the patch. Big trucks went away but the roller kept returning periodically all day long. 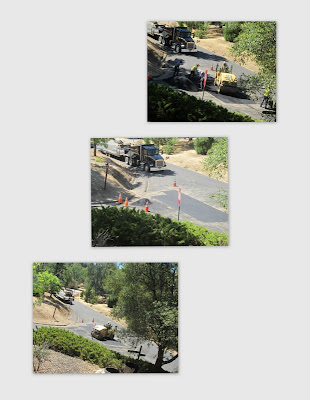 I took a brief break from Word to run to town to get a picture for the newsletter. If you notice the date on the event advertised, you'll have an idea what I'll be doing this weekend. 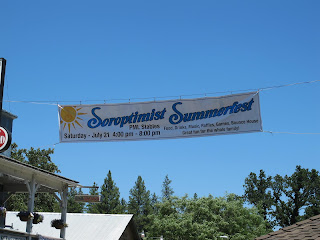 On Thursday, NeedleCrafts day, we had a record crowd of 14. We hardly had space at the tables and began floating ideas such as buying another card table, although room for one more would be iffy. Somebody completed a couple of baby blankets and Paula has one underway. Sandy decided Barbara's little pincushions are good for knitting needles as well. Barbara has finished a sweater, and Judy shows a little booty. I looked at catalogs of kitchen and bathroom faucets so the plumber can get rolling with the New Sinks Project. 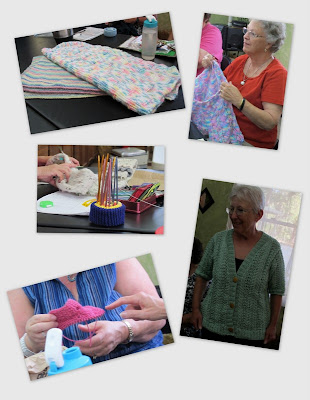 It begins to look like my big street repair consists of a patch at its foot. I didn't even notice anything particularly wrong in that location. You can see the patchwork pattern going up the hill. 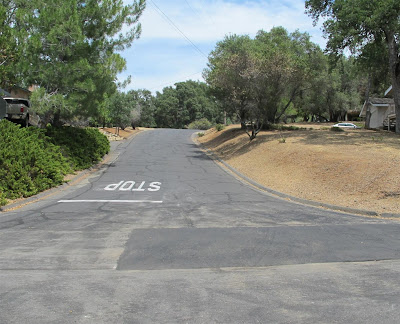 The patchworkness of the roadway is even clearer at the other end of the street. 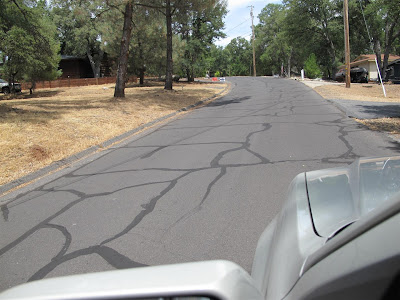 Then suddenly the roar of engines arrived late in the afternoon and along came this behemoth machine grinding into the asphalt and spewing it out the front and into the bed of a dump truck that crept along ahead of it. It included grinding up the new patch at the foot of the street. 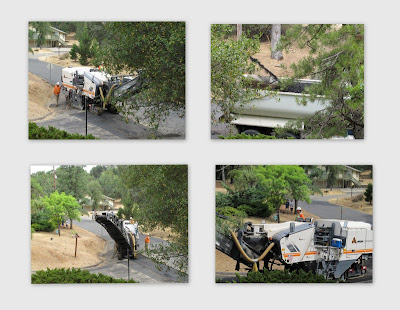 Much of this work was concealed by foliage. My trees have grown! It's one of those things that happens so gradually, you don't notice. But you can see what they did by the result. Then an industrial strength street sweeper picked up what the conveyor belt had not deposited in the truck. 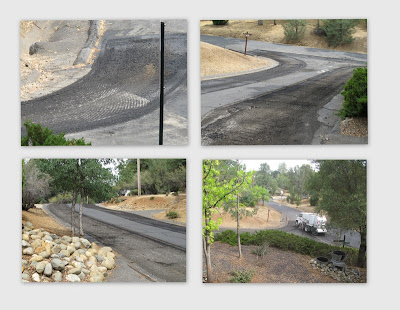 Shortly after noon on Friday, I hit the "Send" button to email the newsletter to the Soroptimists and later in the afternoon joined them at the venue for the Summerfest for a final on-site planning meeting. 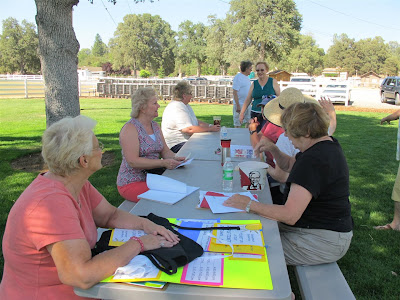 Here's how my driveway entrance looks in the late afternoon sun, with the shadows long and all the imperfections accentuated. At this point, I've decided we have not been abandoned in the big paving process. 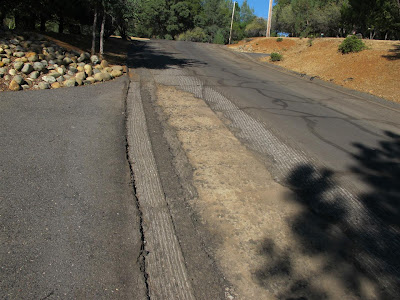 My theory about all this grinding stuff is that they're creating a surface that new asphalt will adhere to better than simply slapping it on top. The patchwork lines are just that: a patchwork effort to seal the extensive cracks that had developed in the paving.  The resurfacing that came prior to that didn't last very well, whether it was chip-sealed or lightly paved. Whether it's ever had a good quality paving since I moved here, I can't recall. Just hoping at this point it will be good, and it's encouraging that machinery that looks like it could build freeways is being used, instead of a dump truck and hand roller.

Last weekend was the busy one, with the tour of Sierra Repertory Theatre, featured in my last blog. Sunday I ran out early to buy organic tomatoes at the farmers' market in town to provide for an RV Club BBQ in the afternoon. Only the farmers' market is only open on Friday evening and Saturday morning.   :-(    I bought tomatoes at the market instead, and will bring you pictures of a nice lake cruise we had after the BBQ in a later blog.

I've totally misplaced Monday. All I have of record to show for it are some pretty early evening cloud photos and middle-of-the-night pictures of the fabrics I bought in France last month.

Tuesday brought a regular Soroptimist luncheon meeting. We meet in the library now and have an optional "box lunch." 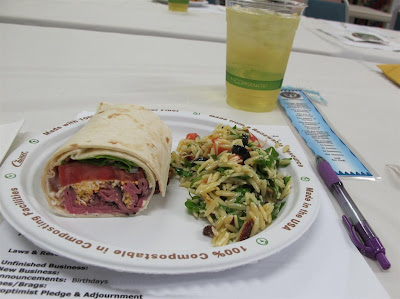 I didn't leave the house Wednesday and there were no signs of any men at work.  Just one more exciting picture of the pavement going uphill from the end of my driveway. 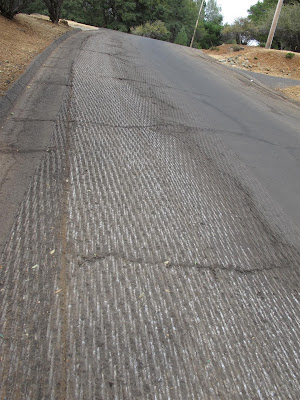 Except that I did have a look around at the cloudy sky. Broken clouds. The kind that lead to spectacular sunsets. And it did. I clicked off 47 pictures of the sunset in just under 20 minutes, as it went from a blaze of pink and orange, then faded into purple and gray. I put extreme telephoto on the picture of the deer far down the road, bathed in lavender light. 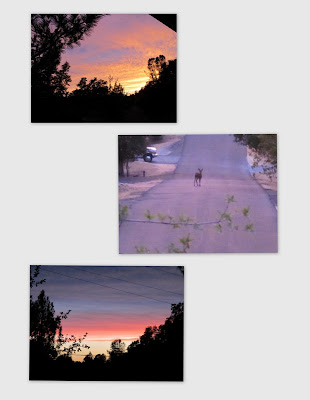 And we're back to this morning. Before I even left the house for NeedleCrafts, there were the black pipes (anybody got a clue what these are for?), the steaming asphalt, the machine laying it down: 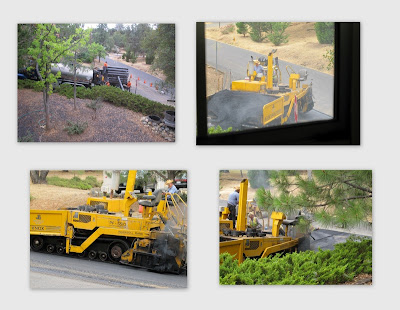 Then I was off to NeedleCrafts, on a muggy day with a hint that there might be drizzle. Paula has completed a baby bonnet, er, more like a hat, and continues to work on the baby quilt. I made progress at wrestling elastic into the waistband of my beltless travel jeans. 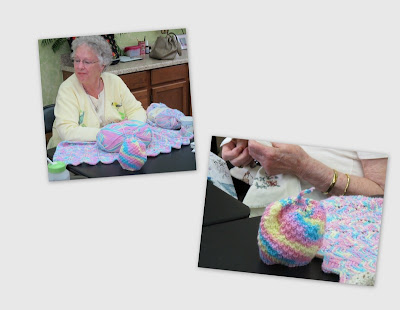 I had to drive to the little city down the hill right after NeedleCrafts to get some blood work done at the hospital for an appointment next week. The original ordering physician up and left under circumstances not disclosed to mere patients. I'm bereft, because I really liked and trusted him. The receptionist at the hospital asked me whom I'd be seeing, given "he" was no longer with us. I could only shrug my shoulders. No one has called to cancel me or tell me anything.

When I got home, there was still miscellaneous pieces of equipment around, looking for the world like they'd been abandoned. There was a road closure up ahead, farther along than my house, but cones were gone and I HAVE A NEW STREET. 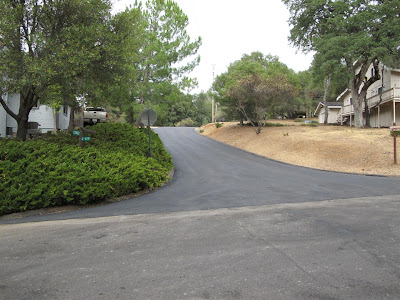 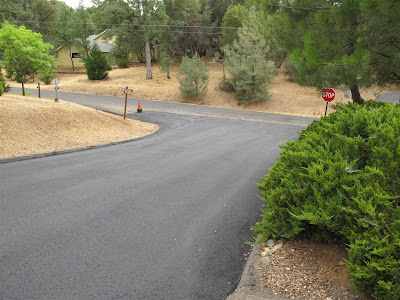 I take it back. All the cones are stacked but not gone.

Later on there was a slight frenzy up the street. The big long truck that had taken up the whole space between my exit driveway and his driveway was trying for a U-turn on the street at the corner.  He pulled out from and the paving machine rumbled up the ramp to the truck, and after a lot of clattering and banging, the truck was "flattened" and on its way. 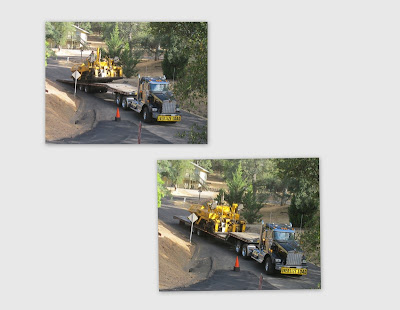 And the sky holds promise of another glorious sunset. 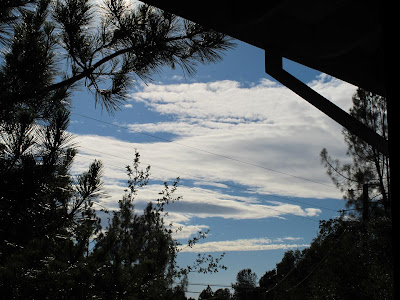