I've just had the sixth consecutive fun and busy weekend (seven, if you let me count the weekend preceding this series when I had another fine trip to the dump), that following a very busy week. I've blogged on a few of those weekends and am jumping the queue on weekday happenings with last Saturday's behind-the-scenes visit to the Sierra Repertory Theatre in Sonora, California. Sierra Rep operates two theatres in the area throughout the year, the East Sonora SRT and the Fallon House Theatre in Columbia State Park.

I occasionally attend productions at one or the other theaters and they are always top notch. They present a fair number of well-known musicals and plays. I'm not particularly a fan of musicals so I pick and choose among well- and lesser-known plays. I don't think I've ever laughed as hard as I did at SRT's first production of "The Full Monty," cheered on by a matinee houseful of largely white-haired ladies such as yours truly.

A few months ago, one of our Soroptimists asked whether anyone would be interested in attending a back stage visit. I was an enthusiastic YES. So on Saturday, Sister-in-Law and I set out for the East County theater!  (That was more complicated than anticipated and I won't mention not noticing several annoying detour signs.)

The theater has a more permanent sign but has preserved this Oldie on one of the other buildings in their theater complex.

We were directed to the regular theater entrance, down the shaded passageway to the theater patio, 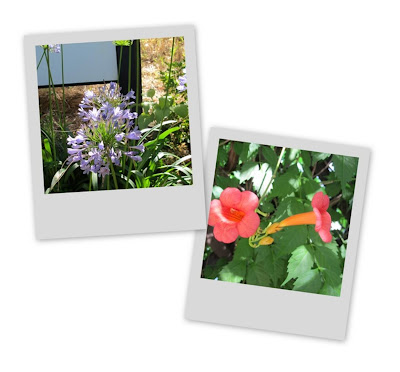 where a group was congregating and being greeted by SRT volunteers. 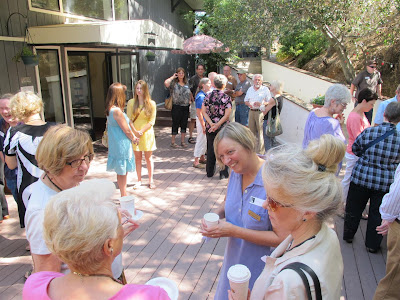 Some of the gathering were Soroptimist, others not. One was a quilter friend from Quilt Camp and Guild.

We began the tour in the theater itself, where a set for the next play, "There Goes the Bride," is under construction. Wow! A robust construction. 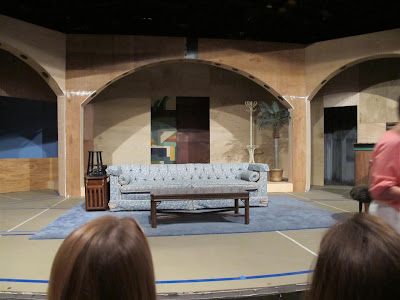 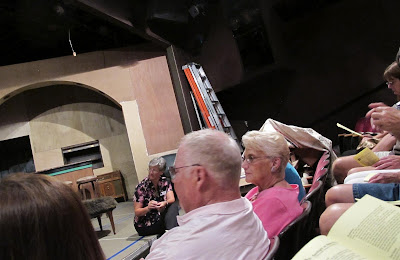 We heard a brief history of the theater from: The first production was "Dracula." Opening night was February 29, 1980 in the converted warehouse. The first season, with 99 seats, six shows, and 59 performers, had 5,100 patrons.


The group-at-large was split into two groups for the tour. Our group went first to the control booth (not sure that's its official name) where Lia Metz, Production Stage Manager, described her job. She has to make sure every little thing occurs at its appropriate time, from making sure the actors are called on time, the ring of the phone is cued and executed, the sound of rain falling in the background, the spotlight on target, setting up the computer to run its sequences. She left me breathless with her job description! 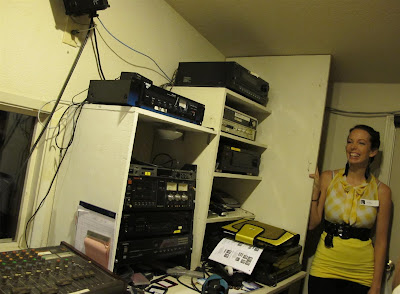 Bev Handelman took us up on stage. A few of us needed a hand up by the Soroptimist First Man (i.e., the Presidential Husband). We got an actor's-eye view of the audience and backstage. That robustly constructed set we see from the audience is the thickness of thin plywood. 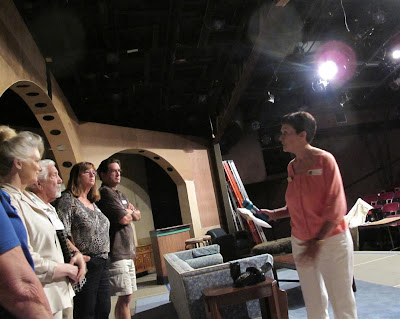 We came from stage front and walked through backstage to the men's dressing-room. Not much to dress in here today! 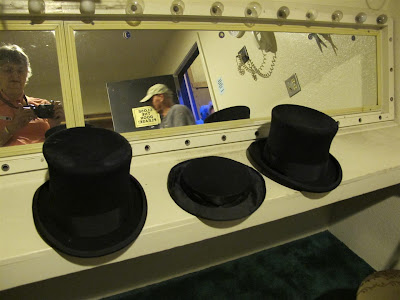 The actors have a toilet and a shower (I think) and a place to hang out between scenes. They can also relax in a covered area outside the stage door (many are still smokers, despite what you might expect) and that same area can be enclosed with tarps to make large dressing rooms for large productions.


We checked out the cast members' lounge, formerly rehearsal space which wasn't quite large enough to accommodate large casts or whirling dancers without incident. 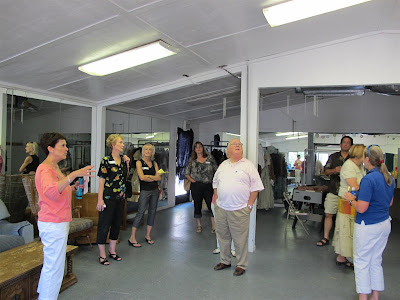 Somewhere, perhaps it's this clothes rack in the lounge, costumes are hung for each actor in a production, identified by a color-coded tag. This also may be the room that gets divided into two spaces for dressing rooms for large casts. 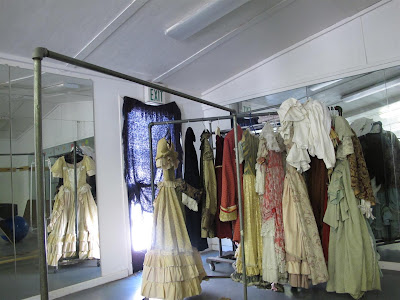 Lots of books to read. 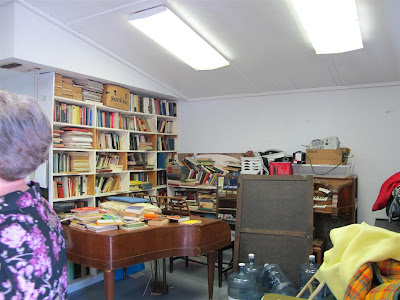 And, actors lounging. This actor is the grandfather in "There Goes the Bride," whose deafness and misinterpretations create chaos among the wedding party. At the moment, he's using the lounge computer. 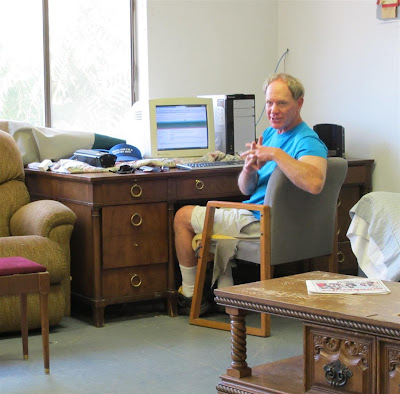 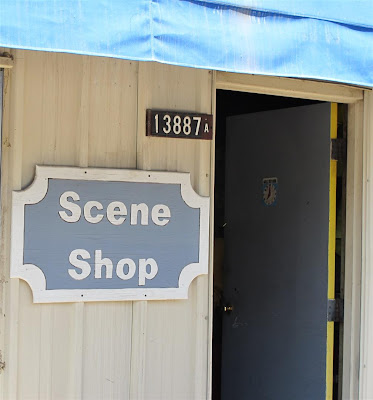 This was amazing. These guys create the illusion that you're looking at the real thing on set, be it brick walls, tumbling bricks or murderous daggers. They pride themselves on inventive use of found materials and ingenious crafting of improbable parts into the appearance of everyday surroundings. (Think carpet padding or foam pulled out of old couches, for example.)  And all that in the lightest weight possible to facilitate easy movements of sets and avoid injury to actors in rough and tumble action.

I should have asked . . . when SIL and I saw, those several years ago, "The Full Monty," one character would run across the stage and up a vertical wall as high as he could go (high!) , then crash back to the stage on his back. Several times. How did he not get brain damage? Or broken bones? Or did he?

The young woman on the right is the props manager for the productions. She gathers everything from furniture, fixtures, lamps, telephones and fake packs of cigarettes, to plates of chow mein (shellacking the real thing attracts ants) for meals on stage.


I regret that I didn't take notes, only photos, so I don't have everyone's name. I've pulled a few from zeroing in on name tags and picked up a few from written materials and the website. I apologize for omissions or errors. 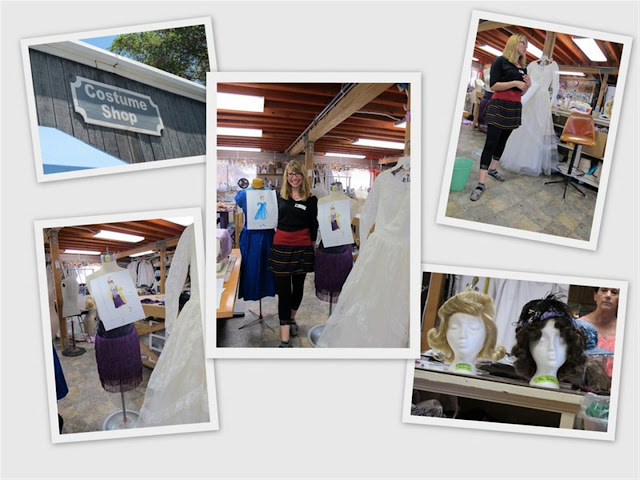 We moved into the costume shop where a phalanx of sewing machines marched out ahead of us (Berninas, for my quilter friends!). Mannequins in costumes under construction for "There Goes the Bride" dot the room. Catch the wedding gown for the titular bride. Racks of costumes line the walls, wigs rest on their stands, and all manner of equipment is crammed into every bit of space.

If that big bottle of vodka on a distant shelf is visible, here's a handy hint: Spray it on a costume (e.g., the bridal gown) which smells musty or of sweat perspiration and it's fresh as new (note to actress: no smoking), or at least fresher.


We moved on to a large warehouse on the property which has been leased to the theater fairly recently. One-third of it has been set up as rehearsal space. 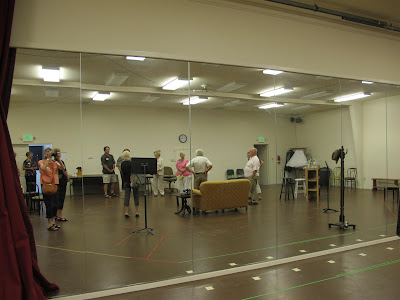 I'm shooting into the wall-width mirror here because it gives the best overview of the space. Its wonderful advantage is that it's larger than the stages of each of the two theaters so rehearsals can be done in "real size."  You can see the taped outline on the floor representing the set of "There Goes the Bride," and recognize also the replica couch and end table with beverages.


Another third of this warehouse is devoted to property storage. Floor to ceiling racks are stuffed with --- one would think -- every kind of furnishing imaginable. 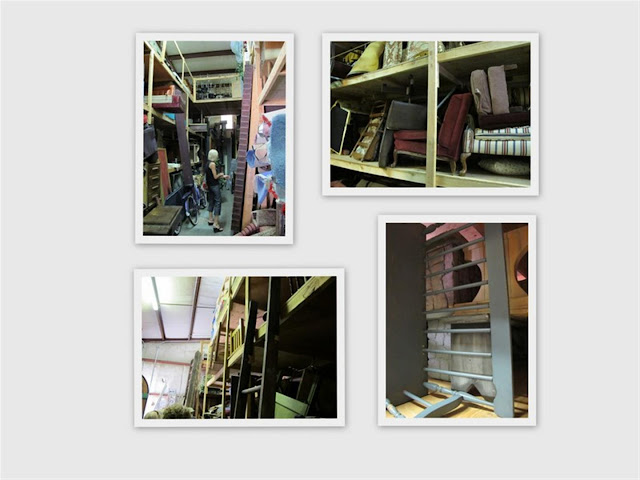 If there's a system to this, it's not immediately self-evident.


The final third of the warehouse contains future office space, to be occupied when the refurbishment can be be financed.

I'm sure, given the sponsorship of the tour, that the Board of Trustees is hoping for donors among us. I'm not in the demographic to become a big donor, but I am inspired to make a modest donation and expand my attendance at their productions.

I want to thank Sierra Repertory Theatre for a super-fun morning, and offer best wishes for a thriving theater community in our largely rural area.