After the Trifecta birthday party Daughter hosted a couple of weeks ago, she wanted a break and proposed she come up to my place for our homeowners' 4th of July fireworks, which are pretty darn nice. Except that 4th of July isn't until the following Saturday in our neighborhood. Her Youngest Daughter is between world travels and returning to university, so we planned for a girls'...  er ... ladies' weekend.

Thirty years ago, a chiropractor told me I should not operate the vacuum cleaner or sleep on my stomach. I regretted the latter. Something to do with problems along my spine here and there. However, my lady who cleans has been ill and cat hair was ankle deep, so I had to do something. Shudder. Vacuum. And wipe down a few counters. Here was my chance to try out a natural cleaning solution recommended by another blogger. White vinegar, with a bit of essential oil to make the house smell less like salad. Lavender, in this case. With judicious use of anti-spasm drugs I managed to be still upright and on my feet when the kids arrived about sunset Friday night, with fur banished and counters more like floral salad dressing.

Daughter is still learning her way here from her new place in Fresno.  This time she had to make a long detour to pick up YD, so now on a couple of occasions, I've received phone calls from the vicinity of Merced. First, "Mom, am I supposed to be going to La Grange?"  "Nope." This time, "Mom, am I supposed to be going on Route 140 to Yosemite?" "Nope."

They arrived with Costco loads of groceries, apparently not trusting me to have food in the refrigerator. Their most earnest desire for the next day was to exercise, to get out and get moving. I knew it was supposed to be hot on Saturday and I knew there was a flea market and farmers' market in town in the morning, so that's where we headed, albeit well advanced in the morning.

Daughter did quite well at the flea market buying goodies for her Hubby (which I will not reveal lest he read this) and YD scored an umbrella to shade herself from the heat. We didn't have a super need for much from the farmers' market with all the Costco food, but it was a fun look-around and a photo op.


They had, however, not eaten breakfast so were starving. We took a break for lunch.

There was an art show at one of the hotels, put on by a group my parents used to belong to and exhibit with. They had a sadly sparse turnout of artists and I wonder why. I think the exhibits used to be held in spring and fall. Maybe summer doesn't work well for participation.

We'd been debating where we would go to watch fireworks Saturday night. I had passes to the marina area and we drove by in early afternoon. I don't think there was an inch of space on that beach or in the water. We would have to get in to try to stake out a space several hours before the fireworks were scheduled and I was not thrilled at the prospect. We drove by the other beach and it was just as crowded, even though the fireworks aren't completely viewable from that vantage. "Swim tomorrow morning," I told them, "when no one else is there."

I remembered Sister-in-Law claimed that fireworks could be seen from the top of her street. We decided we'd try that. An early arrival wouldn't be necessary so we watched "A Good Year," based on the novel by Peter Mayle, and starring Russell Crowe. (Daughter and I appreciated that. Not so sure about Granddaughter.)

When it got dark, we went to the top of SIL's street and after about 10 minutes of pacing around, decided there was no way we'd be able to see anything but the tip tops of the tallest fireworks from there. We hopped back in the car and I went to a street where I'd about frozen to death one year watching the fireworks from my motorcycle. Happily, we found a place to park off the street and joined a quiet crowd in the dark.

We saw beautiful fireworks. My camera captured something quite different. My camera captured an invasion of flying saucers and a bombardment of the area below, after which they fled with flashing lights. You'll probably need to click on them to enlarge them well enough to see. 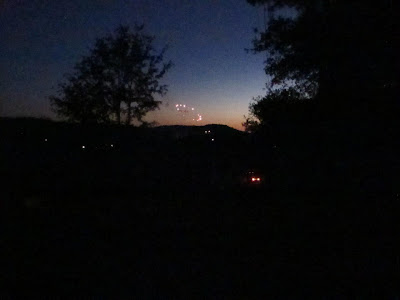 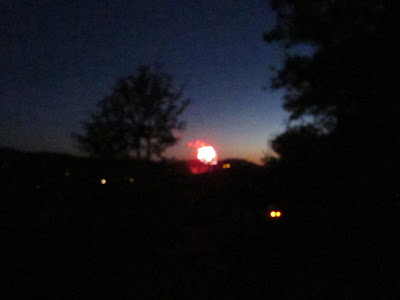 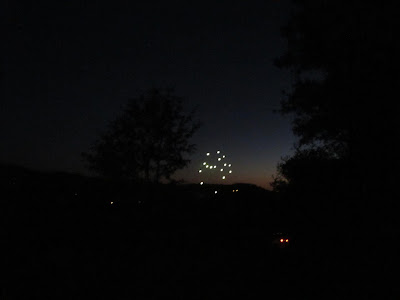 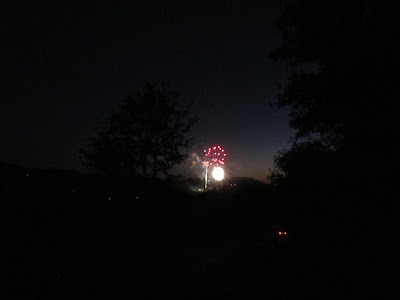 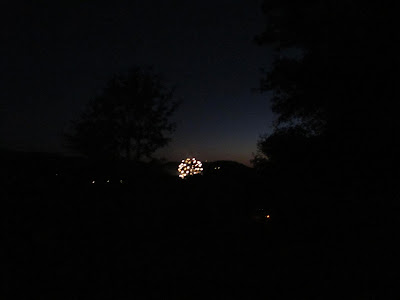 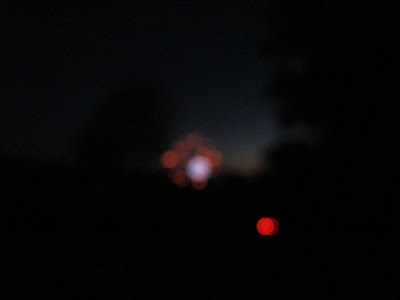 Either that, or I should get a tripod and use the Fireworks setting on the camera.


As promised, the younger ladies got to swim in the lake this morning. 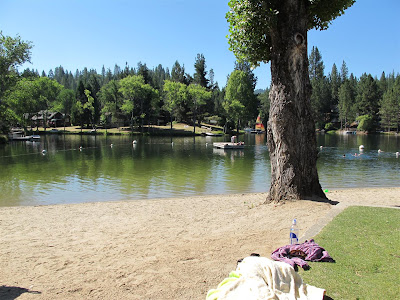 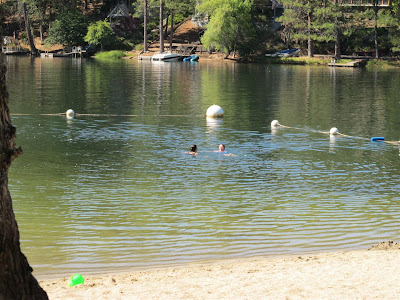 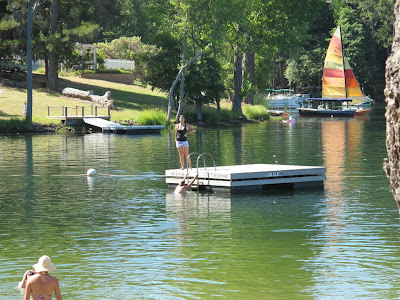 After the swim we headed to Sonora for lunch and a play. 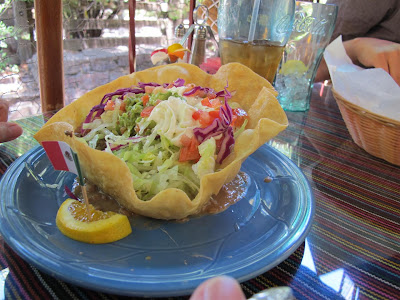 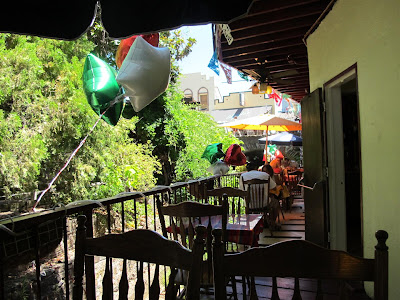 "Red" was a fascinating play, challenging to listen to and challenging to perform, and the two actors' performances were unbelievable. If you're interested in reading about it, just Google "Mark Rothko Red."

My girls took off as soon as we got back home, traveling to Fresno by way of Yosemite, stopping in the Valley for a walk to Yosemite Falls and a dip in the Merced River (exercise!), and a picnic with the food they took away with them. They did leave me some, and I actually dined on fresh vegetables, an egg, and a wonderful piece of bread and cheese.

Now I need to buckle down this week and put out a Soroptimist newsletter and stop all this gallivanting around.