The Plumber Came and Other Excitement of Daily Living


Meanwhile, as well as triumphing over Alpine peaks and celebrating Trifecta birthdays, daily life continues. But not before I show you a birthday card that finally reached me today from a lady I've been corresponding with and having conversations with about French language study in France. I believe she's originally from Germany but lives in Georgia. She asked me back around my birthday whether I'd received a German e-birthday card she'd sent. I couldn't find it among my virtual "mounds" of spam and adverts in my inbox. I was afraid I'd lost it somehow.

But it showed up today. (Perhaps it came via freighter rather than cyberspace? :-)  )

Silence reigns over my little town tonight. You wouldn't know it's the 4th of July. Stuck in the middle of the week, it's orphaned from the weekends around it and I noticed last weekend that a ton of Yosemite traffic was heading home on Sunday. I knew because I was returning home after (another) weekend away myself, traveling against prevailing traffic. We'll have our festivities this weekend. The complex I live in puts on a fabulous fireworks show over our lake. In the early years (when Husband and I first moved up here), we'd watch them from our boat out on the water, dodging falling embers when the current took our boat too close to the launch beach.

It's my recollection that fireworks were held on the True 4th back then, but then it went to the nearest Saturday so that weekender homeowners and vacation renters could be here to see them. It loses a little off its shine when it's so far after True 4th.

After Husband died 12 years ago, it's been hit or miss whether I make the effort to find a good viewing area, or, heaven help us, brave the crowds at our marina beach. Daughter and Granddaughter will be up this weekend, so something will be done. My lady who cleans broke her foot this week, so I think I'll be trying to do that over the next couple of days. Clean, not break my foot. Been there, done that.

When I got home from my French Alps trip, the faucet on the kitchen sink was wobbling all over the place, revealing ugly, gross-out stuff under the (so far as I can determine its name) deck plate. I've had a mental list of plumbing tasks needing attention rattling around in my mind  for some period with a list of other "honey do's" but no honey to do them. I needed lists, committed to paper, to gather all those rattly thoughts together for presentation to the appropriate person(s).

Yesterday I made the plumber's list and left a message for him. He called last night and said he'd be out today to fix the kitchen faucet and review my list of other plumbing requests. (The post office is closed for the 4th of July but the plumber works seven days a week.) He remembered doing work for us many years ago ... several special projects. He has also recently done work for Sister and Brother-in-Law.

I finally got all luggage put away so the plumber would not trip over it in inspecting bathroom basins.

The faucet has rusted somewhere under the kitchen sink and the threads are stripped, so it still wobbles. However, I want a new sink, so I'll live with the wobble until we can do a complete replacement. The sink has been chipped and rusting for years. Same for my bathroom basins. I want new faucets there, too. And I want one taller toilet so I don't groan on arising. The hot water recirculation system stopped recirculating a couple of years ago. I'd like to start that up. A pipe that feeds water to the outside hose bibs has a mammoth leak. The leak is in the basement, so the plants haven't gotten much water since my gardener left town. She used to string hoses together from the one operating hose bib. The plumber and I have discussed all the replacement sinks and basins and he can start getting those. He'll be by with faucet catalogs for me tomorrow.

We'll skip the handyman list until I locate a handyman.


Soroptimist had festivities a couple of weeks ago, installing a president and board members for the coming year.

This is how I spent quite a few days, preparing Pocket Itineraries for travelers with Jeanne Mills' Patchwork Europa trip in September. Lots of slicing and dicing. The new printer did a good job. I have not yet followed up on whether Staples has some way of honoring a service contract on the old printer for which I can't find the receipt. 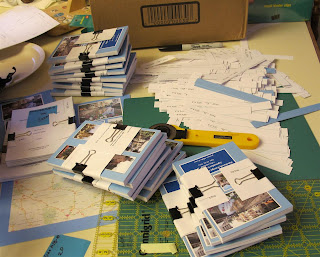 Right after I finished this preparation I headed to the little city down the hill to get them spiral-bound. I left them to be picked up the next afternoon at 5 p.m. That's the nerve-wracking part for me. So easy to screw something up, so easy for instructions to be misread or ignored, so hard to whip out a quick replacement if one is ruined. Remember the time they put the binding on the wrong side? Our left-handed tour assistant kind of liked it, but said never mind when I asked if she wanted a backwards one the next year.


On my way home, as I swept around a corner, panic. A cow was tangled in the fence. 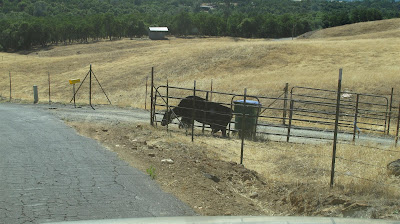 What could I do? I couldn't do nothing. Oooooo, poor cow! I was relieved to find "she" is not a cow, but a sign with a realistic silhouette. It's black on my side but has some cutesy ranch name on the other side. (Disclosure: This panic happened to me on an earlier trip. This time I stopped to take the cow's picture.)


I always suspect they don't even start binding until I call to say I'm on my way to pick up the itineraries. When I arrived at the store, the spirals were in but not yet clipped off at the ends and twisted, but they hadn't put the clear covers on the booklets. The ink jet photos on the covers don't play well with liquids, so the cover is necessary. It took a bit more of a wait while they rectified that.

Off to bed. Thursdays out at NeedleCrafts, to be followed by vacuuming.