It was announced at dinner our first evening that due to the weather forecasts for the next several days, we would likely be moving our visit to the Aiguille du Midi to the next morning to take advantage of a possible window of good weather. At 3,842 meters (12,605 ft.), L'Aiguille du Midi is one of the peaks in the Mont Blanc massif in the French Alps.

Yikes! This was the most dreaded day of the trip. The second-most-dreaded day, the trip home through the Amsterdam airport, had been the dread of a hassle, a mere inconvenience. This dreaded day involved abject fear.

I'd warned Cynthia, our leader.

"I don't think I can do a couple of things," I told her, both in advance by email and again when I finally got to meet her.  "I watched the videos again just before I left, and I don't think I can go up in that cable car, or on the 360 stairs and ramps to the Ice Cave in Mer de Glace (a glacier). My fear of heights is just too bad."

Cynthia had earlier shared her own fear of heights, yet has been to these places.

I think the world is divided into two kinds of people: those who are afraid of heights, and those who are not. I also think you're born with whatever causes it. I think members of each of these groups don't really get it about members of the other one. The underlying sense is that if you are too near the edge, you will somehow be drawn over, either by an outside force or an inner compulsion.

Can that guy grasp, at a visceral level, that height, be it a ten foot ladder or a four-thousand foot cliff, strikes me with paralysis? My body goes rigid, I may tremble, I am immobilized. I might, or might not, be able to inch back from the precipice, and it's not until I'm some distance away that I can turn my back on the threat and the flight reaction kicks in.

The paralysis can strike from a distance on behalf of husband or child or complete stranger who goes too close to the edge. I feel the fear edging in on me when I look at this photo.

I have become desensitized in certain specific situations, but celebrated too soon my "cure." Desensitization hasn't generalized.


Athena, who'd been listening in on our conversation, then revealed her own fear of heights.

Yes but, I thought. "There's the matter of the cable car." I'd been up in the Palm Springs Aerial Tramway back in the day and said 'never again' when I got back safely. "I heard them shriek in the video," I added.

Just to give you an idea of this, I found a few still photos online. The not-so-reassuring photos:


I looked at Athena after her admission. I'd barely met her but she seemed so worldly and self-assured, a multilingual citizen of the world. Even she could be afraid.

"There are only a couple of bumps," added Cynthia, referencing the screams on the video, "and I can warn you when they'll happen."

Athena and I were dubious, but at least it seemed we'd get in the van the next morning.

En route to Chamonix, the city at the base of L'Aiguille du Midi, we meandered over the Col des Aravis, which I translate as the pass over the Aravis range of mountains.


As we approach the summit, there is a flurry of activity. We're flagged over to the side of the road.  Look what's coming. Kathy 2 jumps out of the van and watches. 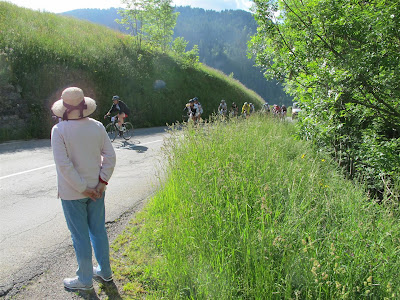 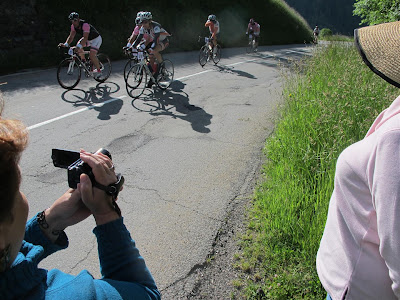 Some of the number plates went up to nearly 2000. Lots of cyclists "climbing" the Aravis, then heading back down the same side. 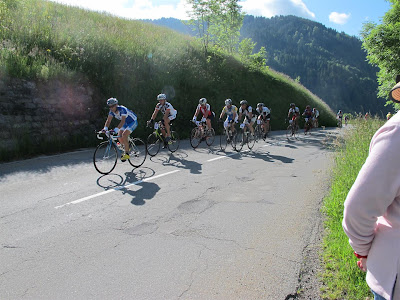 I think this is not Mont Blanc, but is surely near to it. 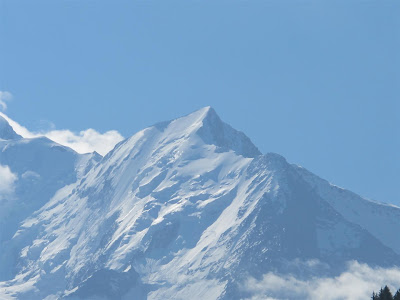 I was still dubious about this whole enterprise as I stood out in the parking lot and stared at the building with the oh-so-French official name. Over my shoulder I was scoping out how far it was to the nearest café to wait out the tour. We all went in the building to use the restrooms, whether or not we intended to go up in the cable car.

There was an effort to organize the hordes of people into some manner of queue, something which the French tend to ignore. Athena and I were swept along with our group. We had tickets in hand. I guess we were on. If she's going to try, I'll have to try.

Excitement and fear warred inside me. There would be breathtaking views.

Homer, Athena's husband will assist us on board. I plan to head for a pole in the middle of the car, put a death-grip on it, and rely on being surrounded and propped up by the masses.

Athena and I still have not frozen or bolted. Homer steadies us in turn and the cable car shakes as I step aboard, as it does with each person flowing on board beside me. I fight off the stiffening I feel at my core at the jostle. Immediately to my left, toward the front of the car, there are poles and bars that I crowd up against and latch on to. (It turns out to be the driver's area.)

We jam in, then the driver orders everyone to take their backpacks off and put them on the floor so more people can fit in. Letting go to take off my pack,  leaning down to deposit it, almost undoes me. I'm not sure where Homer or Athena or Cynthia or the other four of our group, all of whom had been together for boarding, have disappeared to.

I stare at the driver, a young woman, thus shielding my view outside. I glimpse forested green slopes beyond her. Slowly I let myself look out either side of the car. Soft forests, not too far below us. (Deluding self in case we fall.) We're following the slope. Just don't look back down the hill.

Cynthia calls out that the bumps are coming but I already know this, recognizing the sudden swoop of cables and structures for what they are. Two bumps, as she'd said. Not as severe as Palm Springs. And we landed at Plan de l'Aiguille, where we had to change cable cars.

People can stay over and do things here (such as scramble around on the mountain!). I didn't look around much, avoiding an inadvertent look down the 1282 m (4206 ft). That's another 1000 feet higher than the view from Glacier Point to Yosemite Valley, something I have experience with.

A car descended toward us and unloaded, then our bunch boarded the same as last time, the two scaredy-cats taking Homer's hand to board.

I was up against the front of the car, holding a rail. This car felt literally like we were being pulled straight up. I want to say we flew up a wall of ice, but it was more of a creep, a heavy, grinding pull. The span of this section measured directly is 2867 m (9406 ft), but only 2500 m (8200 ft) measured horizontally. If I subtract the platform level midway from the platform level at arrival, I come up with 1560 m (4790 ft). So it's not actually straight up.

A cold wind whipped past us. I'd been too slow when gloves were being passed out and couldn't figure out where I'd packed my own rather flimsy ones. My hands were freezing. But the wall around the platform is high enough and wide enough that the pull of falling is not there. I can press right up against it and look over, though making sure to loop my camera strap around my neck so it won't feel compelled to jump.

I'm triumphant. I want to throw my arms up in "V" for Victory. I'm stoked.

I have a few shaky moments climbing up some stairs and down the other side (all indoors) to reach the departure platform. I get help from Homer into the car and instead of standing rigidly, I let my legs flex with the motion. I don't think I look out the windows -- I think I was lost in an intense inner experience. The downward journey in the "bucket" goes very quickly in contrast to its labored rise.

By the time we are in the second car, I am riding the San Francisco BART or the Paris Metro, grooving with the motion, looking out the side.

I haven't conquered my fear of heights, but with Cynthia's encouragement, Homer's steady hand, and my and Athena's unspoken "if she can do it, I can do it" agreement, I pushed through the fear.

Can I be proud of myself? I still want to go "whoop! whoop!" I'm still on that high.


This day is not over yet.  Other excitement followed. The rest will have to wait for the moment.