"Mom," said Daughter, a couple or three months ago. "What do you want to do for your 75th birthday this year?"

"I'll be in Geneva on my birthday."

"When can we have a birthday party at my house for you?"

Daughter had just passed probation on her new job and signed the papers to become the owner of the house she and Son-in-Law had fallen in love with.

For that matter, Sister's birthday is July 2 -- very close to June, and my Best Friend since 8th grade is only two days younger than I, and was, I found out, coming to the party.

My birthday celebrations began in advance of the actual date, on the eve of my departure for Switzerland and France when Sister baked me a chocolate cake from scratch, her first such endeavor in modern history. 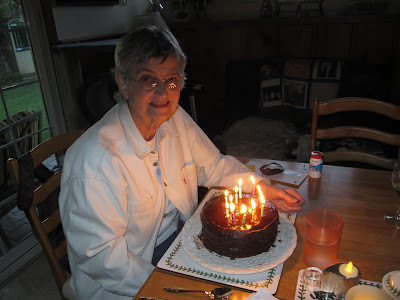 
Three days later, when our French Alps tour had brought us that day from Geneva to the Aravis Lodge in St. Jean-de-Sixt, France, our tour leader gave us a chance to stash our bags in our rooms, then asked us to meet downstairs for tea (he's a British ex-pat, or a citizen of Europe) and refreshments and an orientation.

Hah! Out came a birthday cake, complete with strawberries and little umbrellas. Thank you to our fine chefs. 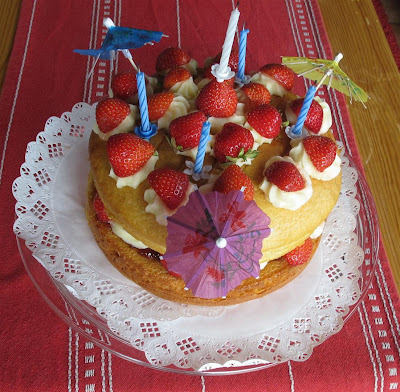 How did they know we have a family history with chocolate cake and strawberries? I posted Something wonderful happened 100 years ago, after I got back from the trip, on June 20, the 100th anniversary of Mom's birth and promptly got a phone call from Daughter.

"Grandma, you, and Brother, all in June, all just 25 years apart from each other."

Yeah. It was. Interesting little fact to add to the celebration.

Sister-in-Law and I packed our blankets and pillows and tiny travel bags into my car last Saturday morning and set out from our little town to Fresno for the big celebration and slumber party.

We traveled through rangeland -- funny clouds -- through Merced and Madera and Chowchilla, looking much alike from the freeway.

We were aiming for noon and would have made it except for the mysterious closure of the freeway we were to turn off on to get to Daughter's house. The next exit, with my turn already committed, was another freeway that sent us farther afield. No map (I knew where I was going, if only . . .), no GPS (broken connection), nowhere familiar. And the sun almost overhead didn't give much clue as to direction.

We went on a rather long drive. SIL kept suggesting stopping at a gas station to ask for directions. I hate to ask for directions. (Sounds kinda like a guy, huh?) I have no confidence that people who take money in gas dispensaries would know where a 10-block long street somewhere in a big city is. They don't even give away maps there anymore.

My route was not direct but I got us there.  I trust my directional instincts in returning to a place previously visited and they came through.  (Fist pump!)

I'll show the rest of our weekend in pictures.

Fresh roses greet us in her living room. 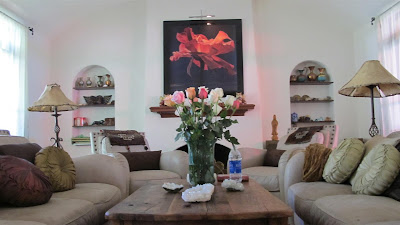 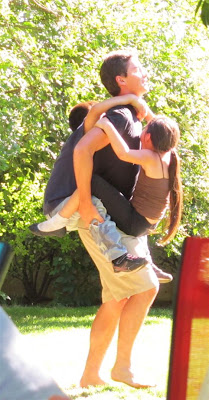 Left to right, Son-in-Law's daughter, Daughter's #2 Daughter (also back from the compostela and 5 months' study-abroad in Ghana), Step-Granddaughter and Step-daughter up from San Diego, Boyfriend of Daughter's #1 Daughter, Sister (standing), and Son's Son's Girlfriend (hidden) 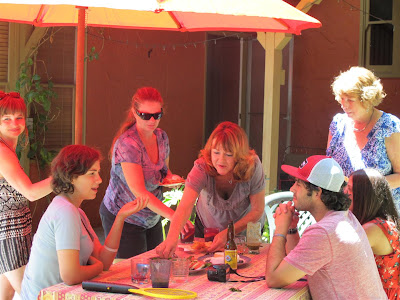 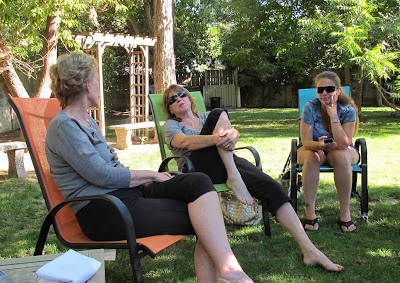 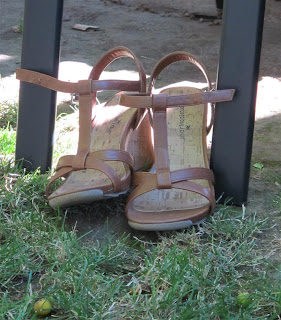 Moi with my friend since 8th grade. (I'm older than she is.  Two days.) 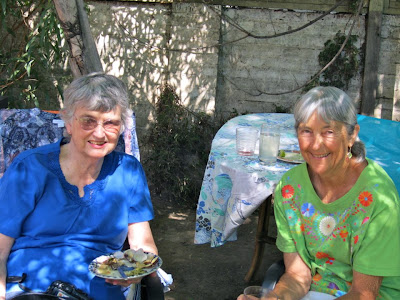 The palms that line the streets are whipping in the wind. 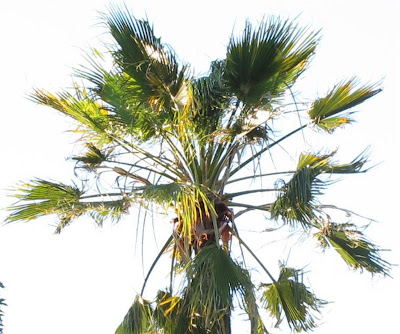 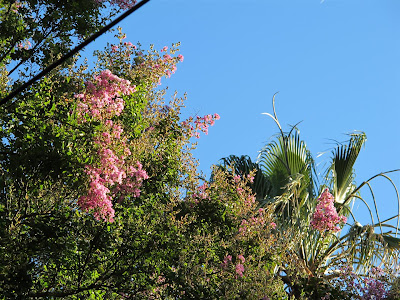 Son-in-Law, who does physical medicine and pain management, works on Nephew's Wife. 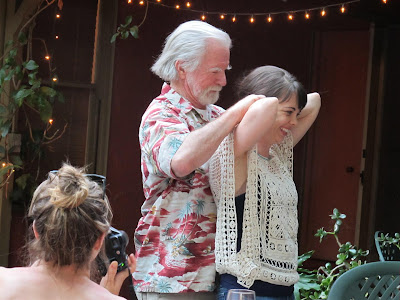 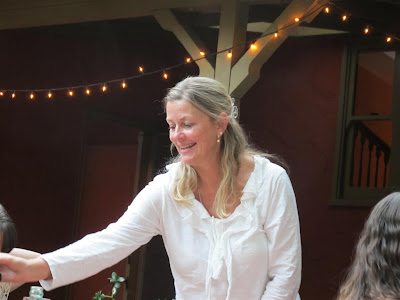 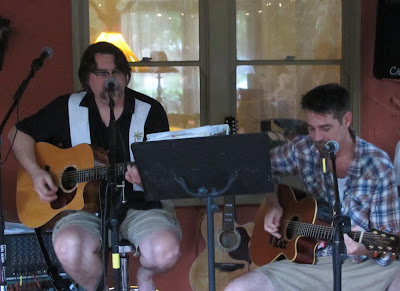 Daughter's First Born at the BBQ - Dinner planned at 7:30 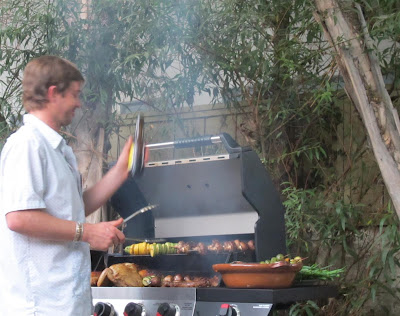 Daughter and Son-I-L get a little dancing in 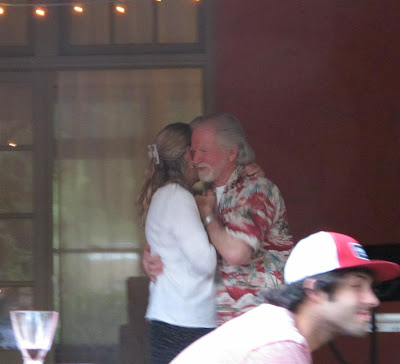 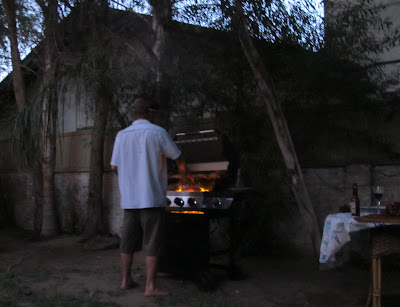 Some food items are coming to the table. 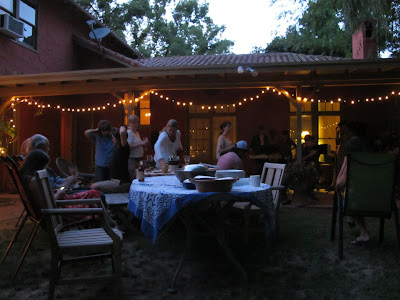 Turn on the lights.

WE CAN'T SEE THE FOOD! 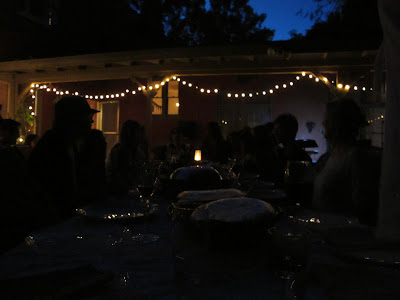 The cake is served. (I saved my fork.) 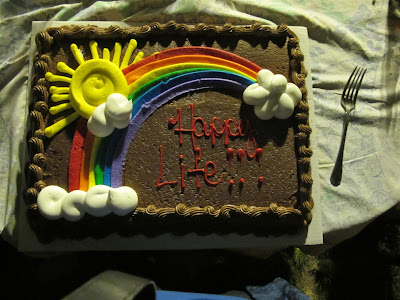 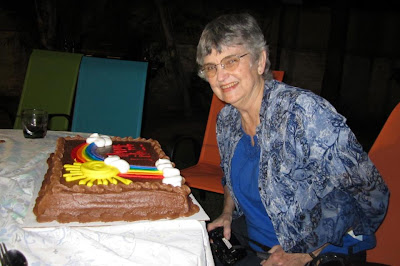 Next morning, I am challenged to go on a walk with Sister-I-L, down a beautiful street lined with elegant old houses. It has a center island the length of the street.  A lost dog followed us almost home. She was collarless and looked as if she is or had been nursing pups. She followed us for blocks, then 1½ blocks from home, she switched her attention to a tiny dog on a lead, which I suspect she thought was her pup. Hopefully, that dog owner will see what he can do for her. 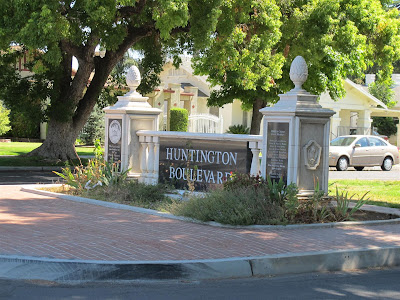 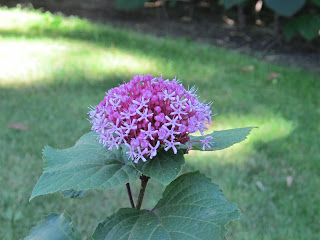 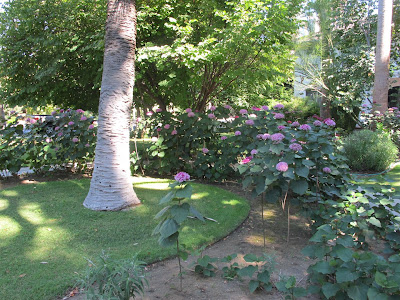 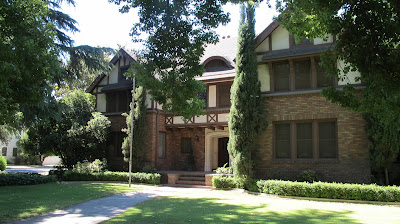 A humongous eucalyptus. Note how tiny the bicyclist in the street is. 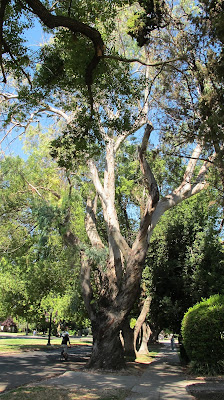 A renovation. The house has been pressure-washed and a big tree is coming down. By the time we came by again, it was almost down. There is a new walkway to the front door and a fountain over under the farther tree. 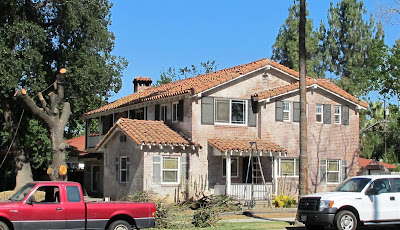 We'd eaten breakfast, or so we thought, before our walk, but Son showed up with a couple dozen eggs and wanted to do a "scramble." Everyone who'd opted out suddenly opted in. 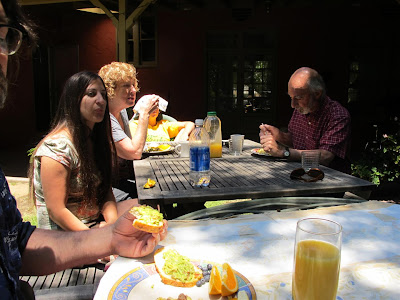 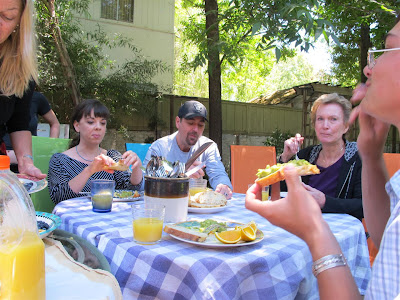 Before we could head for home, I had to stop and buy a printer for a big print job (more later). My not-so-old printer got a paper jam that's not serviceable by me, but with a deadline looming, I didn't have time to track down a repair. We decided to take the scenic route home, that is, through Yosemite. The apparent freeway to the mountains quickly diminishes as we rise into the foothills. There is a steady stream of outward bound traffic. This is, after all, the route back to Southern California and it is a Sunday afternoon.


Traffic our direction isn't too bad on our way into the park. We give each other little pokes. "Oh, are you missing Madera?" "Don't you hate these narrow roads?"

We just drive into the Valley until we reach the point where we can cross over to the road home. It's enough. It's beautiful. How can it not be? We pick up more traffic this direction, and get behind a major slow-poke. How do cars not notice the've got ten cars piled up behind them? There are lots of turnouts to let people pass.

Still, let us not let that ruin our beautiful weekend.

Thank you to daughter and her huband, who worked so hard to get their new home into shape for a gathering, and to all four of her children who know how to throw a BBQ, to all who made the trip to celebrate with me and my co-honorees. A marvelous party  . . .
Posted by Lee I at Thursday, June 28, 2012