SARDINE CLASS AND THE DANGEROUS SHOES


Today was the day on the trip I dreaded most. Well, 2nd most. I'll tell you about the other one later.
Today was the day I had 50 minutes to change planes from a European CityHopper to an international flight home. In the Amsterdam airport.
The "what ifs" had come before  . . .

. . . What if the little commuter plane from Geneva arrives late in Amsterdam?


. . . What if my baggage misses the connection?
For me, I know contingency planning is good, so I downloaded a plan of the Amsterdam airport to plot out my route. It was a 28-page document. I was lost before I started. Who’d even carry that plan with them?

I consulted experts -- thanks, Nina, at The OtherSide of the Ocean. I had her printed-out hints on dealing with missed connections in Amsterdam in my hot little hand.


I had no urgent appointments too soon after my scheduled arrival home.
And, I’d had the Amsterdam airport experience a week ago on arriving in Europe. Kathy 1 and I had traversed the airport in the opposite direction with a more leisurely timeline, a not altogether reassuring experience. We did learn how spot and follow directional signs; and that moving sidewalks shaved some time off the posted travel times between gates; and that security screening pops up in odd locations. We endured one rather abrupt and arbitrary screener, then I was braced by a woman as tall as I am who randomly picked me for the full body massage, er, “pat-down.”


So, as I mentioned in my last trip blog , I planned to walk to the Geneva airport from my hotel. Lots of hotel reviews touted it as a 10-minute walk. I needed to know how long a 10-minute walk took me. With my little suitcase train.
Not all of the hour-and-a-half I spent on the excursion was purely walking. A lot of it was difficulty in locating where the KLM counter would be (at almost the farthest possible distance from my hotel) and otherwise getting lost both inside and outside of the airport. Better allow half an hour. I would not be wearing my “trainers,” as our English guide had called my speedy shoes that run on their own. Too hard to take off at security inspection.

KLM finally sent me an email that I could check in online and the hotel printed my boarding pass. I was briefly encouraged by the notation that those with boarding passes only needed to report 60 minutes ahead of departure. Then, in the very fine print, it said that those with overseas destinations needed to check their baggage 180 minutes ahead, followed by stringent deadlines for arriving for the connecting flight. My first flight was at 07:15. I’d have to check in at 04:15, except that baggage drop-off doesn’t open until 05:00.


I was ready to go out the door this morning by 04:35. I would miss the coffee and croissant I’d ordered for 04:45. It was still dark out. The desk clerk told me he didn’t like the idea of my walking through the tunnel under the freeway off-ramp. Unsavory persons might be sleeping there. He suggested I cross over the wide road in front of the hotel and walk on the other side of the street, which did not have the viaduct feature.
I stepped out the door of the hotel fully intending to do that, but there was no crosswalk between the hotel and the tunnel. The closest was a block the opposite direction. After huffing and puffing up the slight hill toward the signal and crosswalk, I rejected my previous rejection of taking the bus at 04:58. I no longer thought I could beat the bus by walking. Another block up and I’d be at the bus stop.

The bus had me at the airport (but still a walk a ways from the KLM counter) by a few minutes after five. Already a large family that appeared to be “moving house” and a large group of African businessmen and women with tons of conferency-looking bags were ahead of me. I didn’t get my bag checked until 90 minutes before departure.


The full plane departed Geneva on time. It was landing in Amsterdam by about 08:35. I was seated near the front of the plane, determined to make a break for it as soon as I could. Then we had a plane ride on the ground for miles and miles and miles. I did make my break as soon as we stopped and stepped out onto . . . old-fashioned stairs, having to carry my carryon bag down and face a brisk wind that threatened to blow my boarding pass right out of my geeky neck dangle thingy.
I was brisk at walking to the bus, where I waited for a goodly number of the other passengers to deplane before we took another drive to the terminal, arriving there at 09:00, our official arrival time. It was a madhouse getting through passport control, and flights for 09:50 were finally called into the short connection-time line. Boarding for my flight was under way and would be cut off at 09:40.


I adore the moving sidewalks. I’m a slow walker these days, and on the moving sidewalk, I walk past the people who simply ride and I walk past the people who trek along beside the moving sidewalk and I feel like I’m about to make those wonderful leaps like in Crouching Tiger Hidden Dragon, freed from gravity.
Well, thank goodness for the moving sidewalk. I began to think there’d be no additional security check to go through. My plane was in sight. And right there at that individual boarding gate, there was a security screening set up. There were two screeners who helped me put my stuff on the belt and handed me the bag with the laptop to pull it out. I think there was a full body scanner, but there was also the woman who jumped out at me to give me the massage. Again. To me, it’s both weird and funny. I guess cuz I know my panti-liner contains no explosives and I’m certainly suspicious-looking.


“Did I make it on time,” I asked them. “You made it,” they assured me.
My seat, second row back from the door, window, was the only vacant seat within view. Who knew where my carryon would fit. The flight attendant found me a spot in the overhead, then waited expectantly. I was able to lift it into the overhead in the little commuter plane, but this one was way over my head and over several people whom I would kill when I dropped it on their heads. Thank you, flight attendant, for helping me wrestle it up there. But it looked like a sure candidate for baggage which may shift in the overhead compartment, so beware below.


After rousting my seatmates out, I dropped into my window location and found a Dutch signal on my French phone to call Sister to tell her I’d made my flight. One a.m. California time. “We know,” she said. She and BIL were up watching the Le Mans 24-hour endurance race, and also tracking my flights.
I scribbled much of this on the flight, and took lots of pictures, because it was mostly clear as we flew over Iceland, which clouds have prevented my seeing before, and I think we were farther north in Greenland than I’d previously seen. Do click these pictures to enlarge. The real-life scale of it all was incredible.


On the ground in Amsterdam 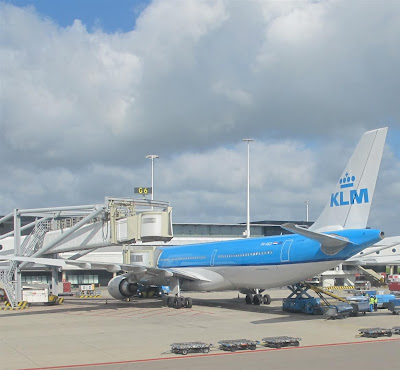 Leaving the Netherlands below 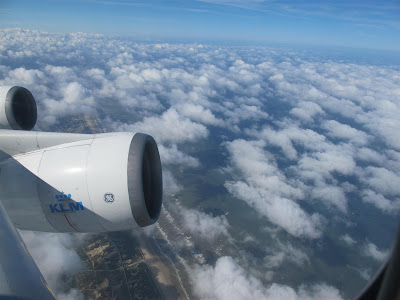 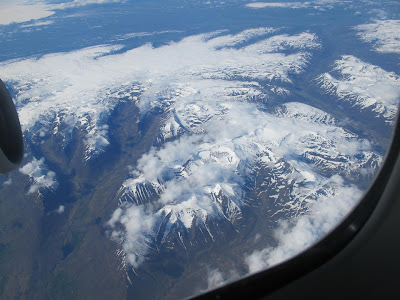 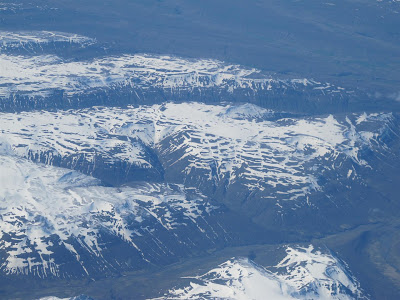 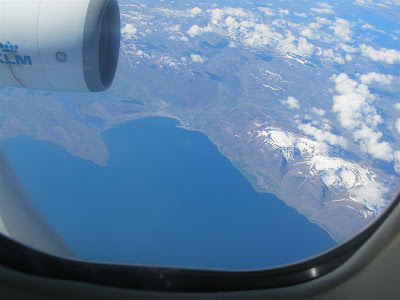 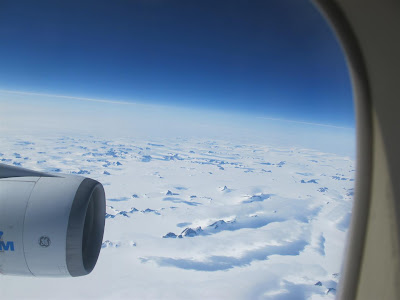 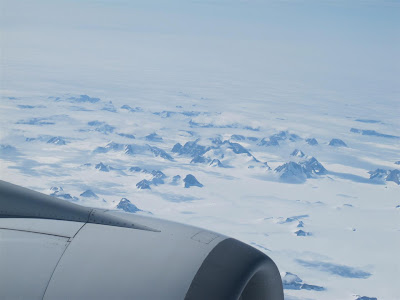 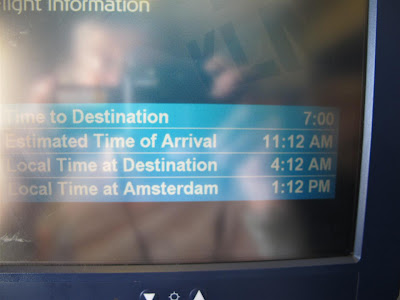 I’m not getting excited until it’s down to 4 hours. 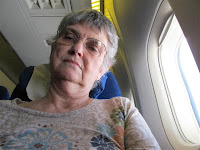 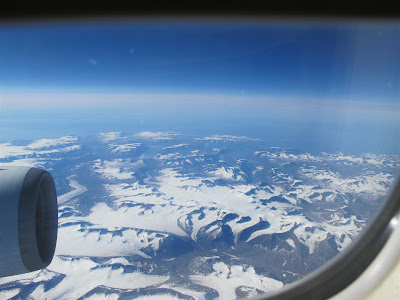 
My checked bag made it. It had already been taken off the carousel and lined up with other bags by the time I got through passport/customs/immigration control, or whatever we call it these days. Last on, first off, I’ll bet. As long as the connection is made!


On the customs declaration form, there is a bunch of questions. Are you carrying this? Have you done that? Have you been on a farm?


Why, yes, I have been on a farm. We went to see cheese made on a cheese farm. We went in the barn, but the cows were not there. So what happens if I (truthfully) say Yes.


I get a big red circled 1 on my form, and lower down, a big A, and at the last check point before I exit the baggage area, they tell me to take my suitcase over there to the nice man in agricultural inspection.


“Are you the nice man I’m supposed to see,” I ask as I approach.


He asks about this farm, seeming incredulous. “Were there cows or livestock?”


“Yes, they need those to make the cheese.”


I had to dig in my bag for the shoes I’d been wearing on the farm. My speedy shoes. I hadn’t even had to take my shoes off at the airports on my return trip. He took them away and gave them a bath. They passed muster. I’d tromped around in an awful lot of rain in them after the cheese factory.


This is a re-creation of what occurred on the conveyor belt. 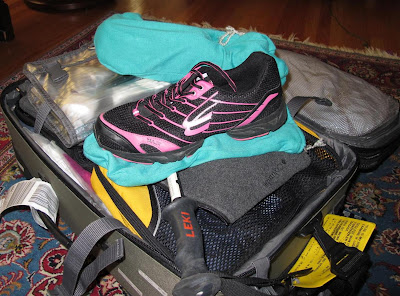 
Big party this weekend. Probably won’t see you until afterward.