Have you ever carefully plotted out when you need to do what in order to meet certain deadlines? Then things keep popping up you'd forgotten about and suddenly your systematic march toward the deadline feels all jammed up?

I've got to meet Sister in Walnut Creek on Wednesday, with certain tasks accomplished before I go. To orient the non locals, it's about a three hour drive there. There's been more or less the usual parade of stuff, since I last posted something in this space.

I've spent would-be blogging time assembling photos for a special blog I want to do later in the month. My hope had been to get it all written up, neat and tidy, and schedule it to post automatically at the proper time. I assembled, I sorted, I tossed out duplicates, and at this point, there are way too many. It'll take me awhile to rip my heart out and end with a manageable number. :-(

I wanted that little project done, but it doesn't have to be, before I go to Sister's.

I've crammed working on my Pocket Itinerary for my upcoming trip to the French Alps into all the nooks and crannies of time. I printed the cover once and stashed it very carefully in a safe place, since printer ink and water do not get along well. When I took it out the next day to glue front cover to back cover, it had a big smear on it, kind of like a Chloe barf, although there was no way she had access to it. Print again, let it sit quietly for another day, even more carefully hidden from Chloe or any liquid source.

I did laundry on Saturday and ironing on Sunday. Hell must have frozen over. I know I haven't ironed since at least August, because my poor, brand-new, Not-Your-Daughter's-Jeans cutoffs that got the hole in the knee when I fell on my face downtown were among the lot of them. I've searched and thought missing several of these items over the months, as if people had snuck into my house and stolen my pricey blouse.

In fact, I might as well show off the fruits of my labor, since I'm bursting with self-congratulation at having done it. There's the Rowenta, a favorite of many quilters. This is a new one to me. It sat in reserve in its box for many years, until the old Rowenta spit on my clothes one too many times. It had no instructions, so I'm still trying to figure out the enigma of the icons. 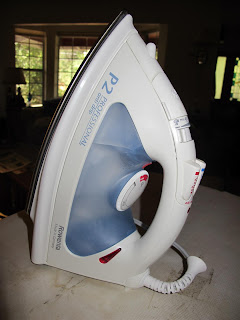 Five short sleeved T-shirts, two aprons, one long-sleeved T-shirt, four dress shirts, and eight pants and cutoffs. I don't even remember some of these. 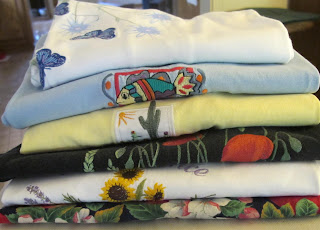 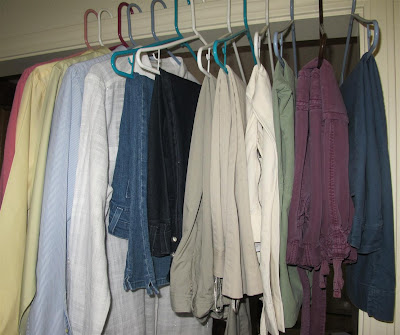 Next door, a Dish truck that was there for hours, apparently must protect itself from random sideswipes, even in driveways.  An abundance of caution. 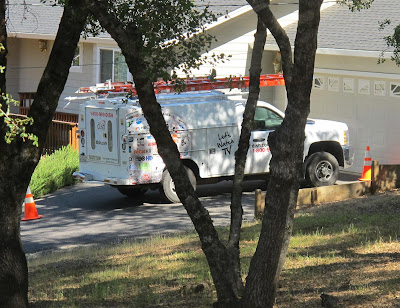 Tuesday night is French class night, but I had double-booked a Soroptimist social, having somehow thought it was on Wednesday instead. I arrived at the social as the host husband was tossing the tri-tip on the barbie. 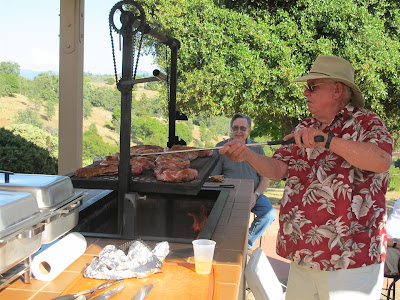 The house sits on a hilltop, with about a 260° view. I went into the garden as the rays of the setting sun slanted through these purple flowers. 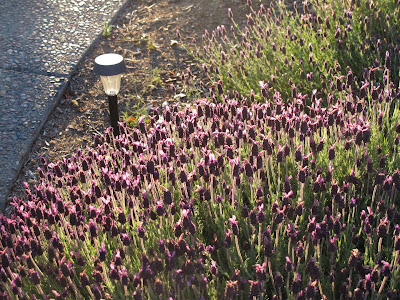 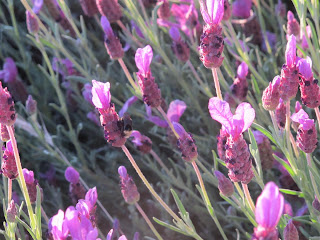 My family were artists and painted many landscapes of receding mountains, with the pastel hues of the ranges softening in the distance. I could never emulate that. It was so frustrating and a good reason why I never became a painter. I still love that genre of scene though, and captured a bit of it here. 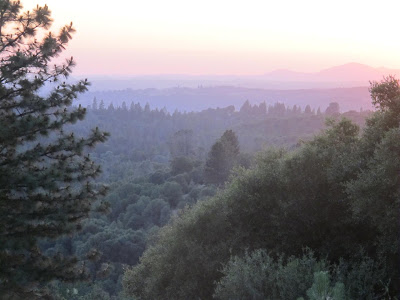 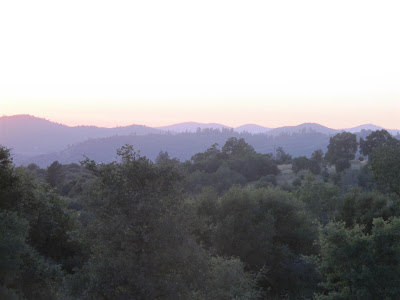 And finally the sun sets. 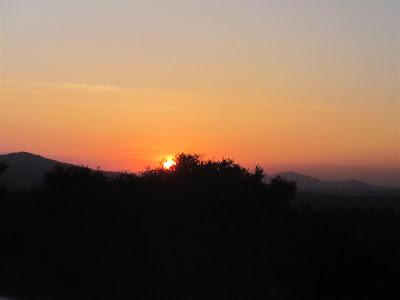 I couldn't go to the little city down the hill for French class that evening, but had errands undone that I therefore had to do on Wednesday.  One was to get the Pocket Itinerary spiral bound. Cynthia and Bernard of French Alps Tours consented to let me use their photos on the front, since I haven't been to the French Alps. The photos in Lyon are mine from previous trips. 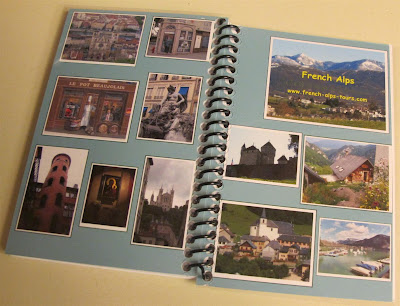 A map of the tour area (Google) is on the inside covers. I couldn't get a really clear map photo, since the camera kept focusing on the edges of the inside pages. I'll have to figure out some of the manual settings on that camera. 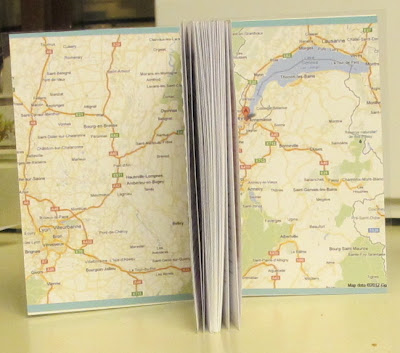 While the binding was being done, I dropped a hundred $s on cat food, litter and treats. Oh.My.Aching.Back. 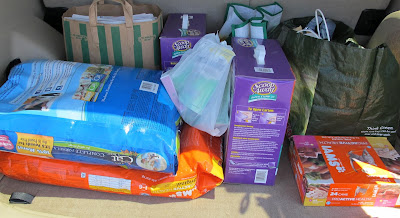 I stopped on the way home to catch the California Buckeye in bloom. The season is brief and the elevation at which it grows seems very narrow. The blossoms at lower elevation were already going to seed. The whole bush, or tree, will look like it is dying rather early in the summer, but it returns again the next spring. 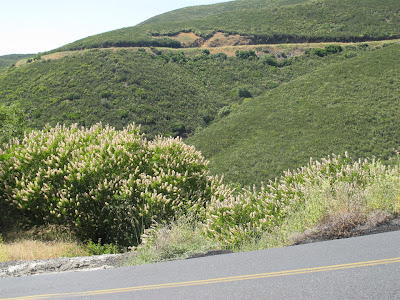 This plant is kind of embarrassing. Those flower spikes are l-o-n-g, and one cannot help but think of it as the penis plant. 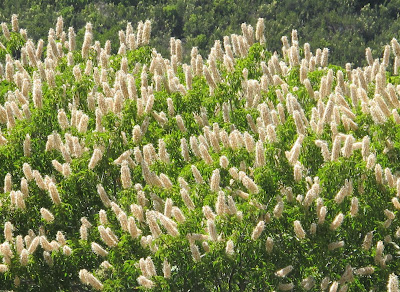 From penis plants, we go to baby hats on Thursdays Out. Judy began to pull hats and huge balls of yarn -- that pink one looks like cotton candy -- and scarves under construction out of her magician's sack. She just kept going and going. Judy doesn't work on only one thing at a time, and I don't think she can pass a yarn store that she doesn't clean out! The baby hats were donated to a hospital nursery.

Norma had finished this beautiful baby blanket. I think she did all that lacy effect with knitting. 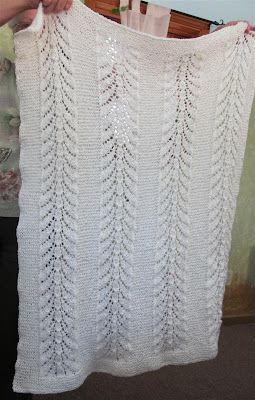 I'm including the blurry picture of Chloe because June 1 is the first day of the June Photo A Day Challenge, which I signed up for. Today's prompt, or topic, is MORNING. This is my first view in the morning. I couldn't tell it was blurred because I didn't have my glasses on. I also took pictures of my TV, where the Today Show wakes me up every day. Without my glasses on, those looked stunning on the camera's LCD screen. One was adequate to submit to the photo challenge. I'm posting my challenge photos on Facebook.


As I went out for the mail this afternoon, this little guy was looking so cute with  his newly sprouting antlers. I stopped the car and shot through the open passenger window, being very quiet so I wouldn't spook him. He was so unfazed that he began to graze, so it's hard to see those little furry antlers, but if you enlarge it (click), they are right in front of his ears. 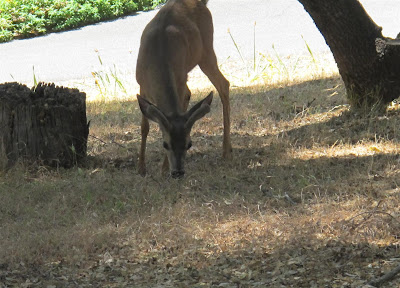 That's it for the week. I did not merely straighten up the living room by throwing everything in a pile on the coffee table; I've actually sorted some stuff, taking much longer than I'd allotted, and old magazines and catalogs will go into recycle. The vast accumulation of charitable requests, subscription renewal requests that start a year or two ahead of actual expiration, political contribution solicitations, and membership renewals have been bundled in lists from Quicken of last payments and payment dates for action decisions. Or no action. More of the same to follow.

And Saturday I go to the dump.

See you when the dust settles.