5/1 - Yikes! New month, new bills to pay. But first I have deposits to make from last month: 17 membership renewals to process for the computer club, 14 campout checks to deposit for the RV club, checks to write for past, present and future campouts. Not to mention all my personal first of the month stuff.

I got the deposit slip filled out for the RV club on 4/30. I was googly-eyed by that time of night but wanted to make both deposits en route to the little city down the bill on Tuesday for a dental check-up on my implant's healing, so pressed onward.

There are 15 lines on a deposit slip (front and back total) to enter all those banking numbers. I had two too many checks for one deposit slip. Do you scrunch a little and make them all fit? Do you append a second deposit slip but put the item count only on the main one? Has it turned into two separate deposits with separate totals? Should you dump shredded paper loose into the paper recycle bin?

I had four check still left after I filled the 15 lines.  Rats! Things were clearly amuck. I gave up for the night.

5/1 itself was a busy day, starting with a meeting for planning a big Soroptimist summer event -- gathering budget numbers, contemplating staffing for booths, calculating costs. . . . I never was a whiz with arithmetic but any intuitive grasp I once had has slipped away. Still, one price seemed wildly out of line and after letting it rattle around inside my skull for awhile, the answer popped up -- divide by four. Voilà. Smaller number. Lower amount.

Early afternoon I studied for the evening French class. Last week each class member was given official campaign brochures for two of the 10 candidates for president of France for us to present a quick summary of their platforms to this week's class. There is a very short campaign season -- six weeks as I recall -- with a first round of voting on April 23.

The top two vote-getters are in a runoff for the presidency this Sunday, May 6. Those top two had already been chosen by class night. Current president Nicolas Sarkozy will face a runoff with François Hollande. Sarkozy, UMP (on the right, but not the far right), got 27.18% of the vote in the first round; Hollande, PS (socialist but not the far left), got 28.63%. There was one very long debate between the two in the entre-temps. Hollande is said to be leading in the polls and each is courting support of the failed candidates to win votes from their followers.

All that presentation stuff came after my trip to the dentist, though. The gum around the implant post is healing nicely. But a tooth on the other side of my mouth started hurting when I chew a couple of days earlier. Oh, hallelujah! I always get a toothache in the final stages of planning a trip abroad. He found an old filling has a new crack. And I want the tooth right next door that's practically married to the achy one upgraded as well. The $$$ I will be expected to pay for the insurance was presented for my viewing on a piece of paper, just like they do it in the movies, never speaking the numbers aloud.

It wasn't until Wednesday that I got back to getting the deposit slip straightened out for the computer club. Solution. Make my own list on a computer spread sheet . . . entries unlimited. (The ink ran out on my beloved paper-tape adding machine several dozen years ago.)

It gets confusing sometimes being treasurer of two organizations with common elements to their names and quite a few members in common as well. I've been known to deposit one club's money into the other's account. Or my favorite -- I make photocopies of all checks being deposited and leave the last batch in the copy machine. 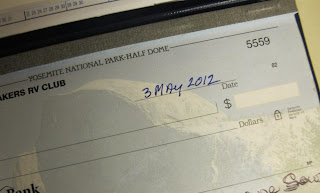 Sister invited me to dinner on Wednesday and we started with a tour of the nearly-completed deck repair and extension.

Sister was going to make cushions for the chairs on the Grand Garage's entry deck, then Walmart did it for her for the same price and less effort. 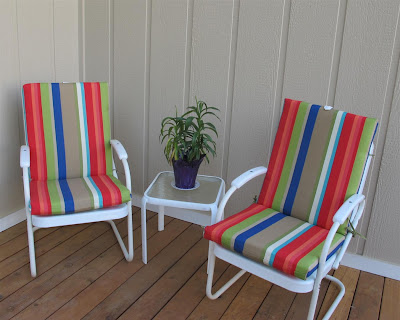 After dinner, Lola cuddles on BIL's shoulder, until the camera comes out, then she starts a vigorous face wash. 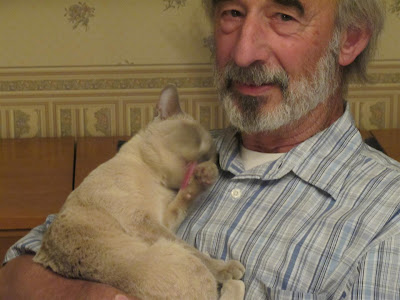 Today, the actual Thursday out is, of course, NeedleCrafts day. We had -- count 'em -- 12 there today. I also got a redo on some of the creations whose photos I lost in the big SD card failure last Thursday. 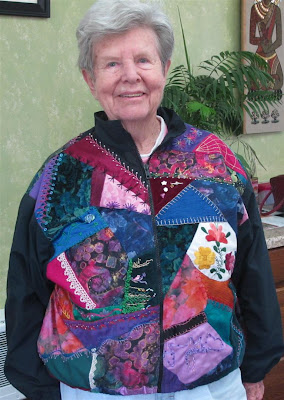 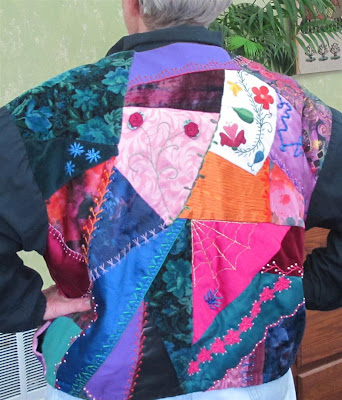