Meanwhile . . . life gallops on, more or less as usual

I actually cooked something for dinner tonight. It was only an omelet, but it's very tasty and has been my go-to choice in the past. I hadn't made it lately and suddenly remembered it. Then I had  this disaster:

I think I may have demonstrated my omelet previously, but it tasted so good tonight. Preheat the broiler. Whip up two eggs (these were pretty old, since I hadn't done this in awhile, but I don't think that's a requirement) with a little water and shake or two of salt. Oh, first microwave a serving of sweet white corn and let it drain while the eggs cook on the stove top in a frying pan sprayed with olive oil cooking spray.

﻿
﻿
﻿
Do click on that Explanation of Revisions. It means I made a mistake. I checked, like they said to do, and all I did was to transpose a couple of little numbers. I reported that I'd sent them $4864 when what I should have said was that I'd sent them $4684, so naturally they think I owe them $180 more than what my tax forms (as I turned them in) say I do. All calculations being interconnected, this same error will also apply to what I reported to the federal people about what I paid to California.  I'm thinking it would be a good idea to file amendments to both federal and state or these same numbers will haunt calculations forever into the future. 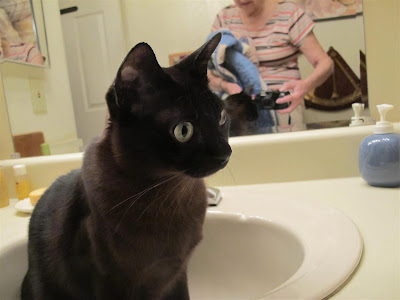 We had a good group at NeedleCrafts, but I didn't take any pictures and didn't do much else for the day, so consider Thursdays Out as herein included.

Soroptimist (mission: improving the lives of women and girls in our community and throughout the world) had an awards luncheon to honor three women in the community (including one young high school woman) for service of various types that promote our mission. Their families were also invited to see their honoree receive her award. In addition, six other young women received their new membership pins for joining S-Club at the high school, a group mentored by Soroptimist along with its faculty advisor. These young women are so impressive ... there are some good ones out there in the next generation! 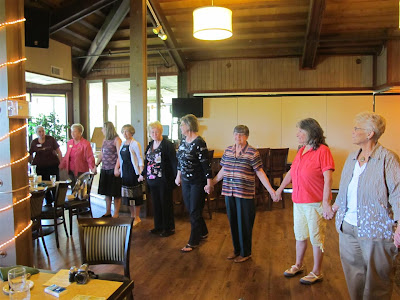 It wasn't all fun and games with old college mates. I got to go to chez le dentiste to have that incipient toothache from last week taken care of in good time before I leave on my French Alps trip. While my mouth was open, I had him replace an adjacent filling for good measure. All the anesthetic had disappeared, so no problem with my good dinner with friends.

The pair of shoes I had ordered to try on when my daughter and I went to the street festival and shopping a couple of Saturdays ago was in. I chose Sunday to go get them and take in a movie on the same trip. The shoes fit. The movie was The Five Year Engagement. Not great cinema but amusing entertainment and it didn't require a pocketful of tissues. Here are the shoes. I've been trying to break them in. (Who needs to break in SAS shoes besides me???) 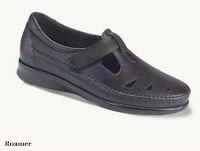 There was the whole other matter of the cute tennis shoes I'd seen, but it didn't fit my left foot and they didn't have a bigger size. I suppose we could have ordered a trial version, like we did with the SAS, but I think no one thought of it. They had a pink stripe across the toe that visually shortened my long skinny foot. They were very light weight. They were cool. I looked at them again on this trip and mentally noted the brand and model so I could look it up on Zappos or such-like.

I forgot the brand name by the time I got to the car. Roundabout on the Internet I figured out what it must be. Their sizing recommendations are to order a size larger than normal. Aha! That was the problem. It wasn't on Zappos. I had to go to the manufacturer's site. I ordered a pair:
﻿ 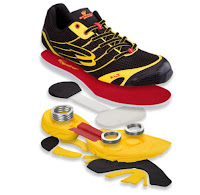 Yes, I "did" the week backwards. I was a little bored doing in the regular sequence.